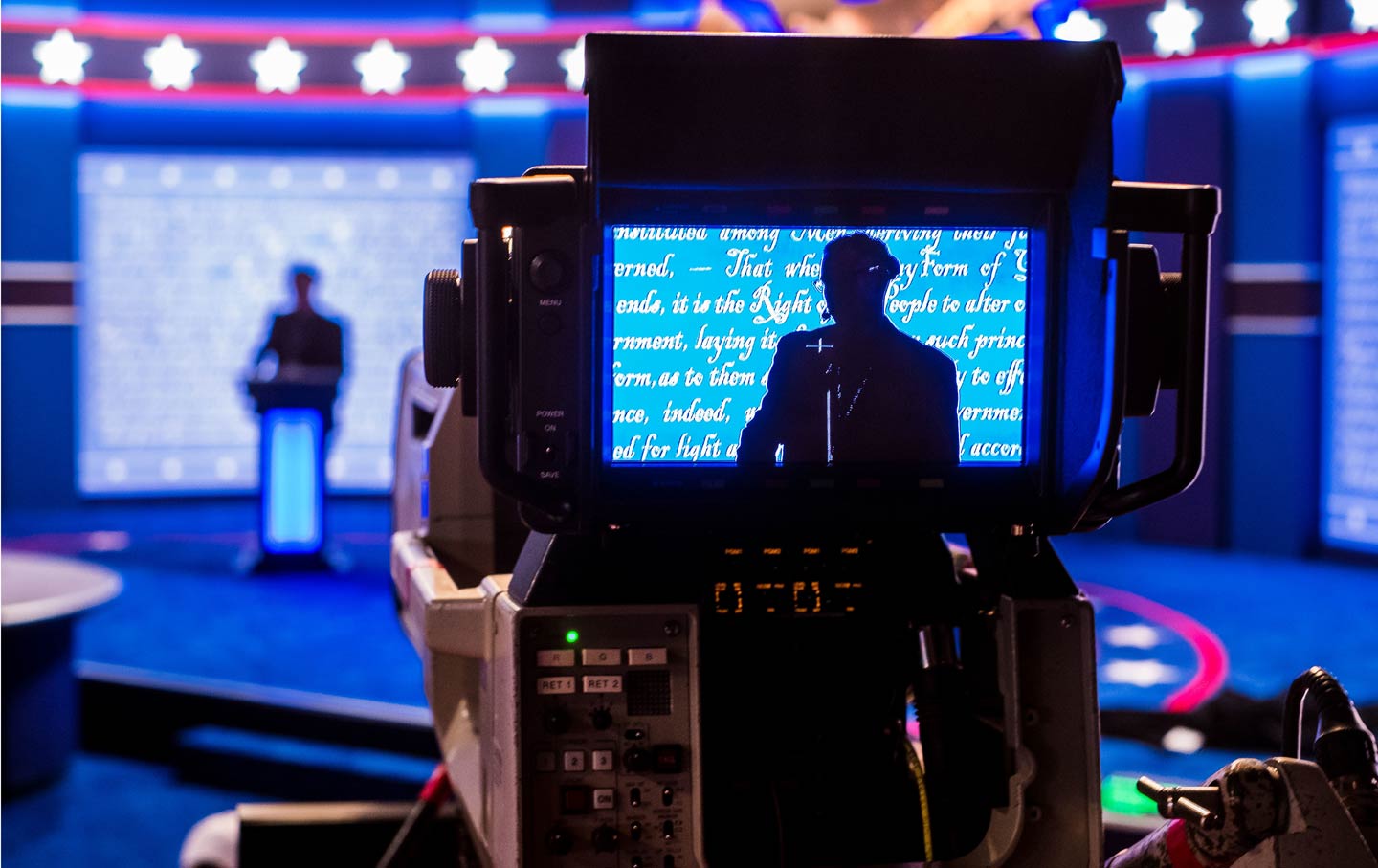 A stand-in for Republican presidential candidate Donald Trump is seen in a television monitor as preparations continue on Sunday, September 25, 2106, for the presidential debate at Hofstra University in Hempstead, New York. (J. David Ake / AP Photo)

The Commission on Presidential Debates gets just about everything regarding presidential debates wrong—letting the major parties define the process. excluding credible third-party candidates, opting for too few debates and too many gimmicks—so it should come as no surprise that the CPD is now sending exactly the wrong signal regarding the role of the moderator of Monday night’s first debate between Democrat Hillary Clinton and Republican Donald Trump.

“I don’t think it’s a good idea to get the moderator into essentially serving as the Encyclopedia Britannica,” Janet Brown, the executive director of the CPD, griped in an interview with CNN’s Reliable Sources Sunday. “I think it’s better for that person to facilitate and to depend on the candidates to basically correct each other as they see fit.”

No, that’s not better.

That’s making the moderator a spectator rather than a useful participant in the process.

The truth, and reality, should not be open to debate.

Brown says that “the commission asks independent, smart journalists to be the moderators, and we let them decide how they’re going to do this.” But if moderators are discouraged from pointing out glaring inaccuracies, or from clarifying disputes over facts, then it doesn’t matter if they are “smart” or “independent.” They’re still letting the candidates spout falsehoods with abandon and setting up a partisan circus in which liars can “win” by outshouting truth tellers—and viewers are left to their own devices.

Demanding that the candidates fact-check each other encourages a derailment of the debate, forcing the contenders to bicker over who is telling the truth and who is not. That’s not necessary. If the moderator knows what is true, and what is false, the moderator should say so—not to embarrass the candidate who is wrong, nor to help the candidate who is right, but to lead a debate that is grounded in reality rather than an exercise in confusion. If Donald Trump claims he always opposed the war in Iraq, it should be pointed out that the record does not support his claim. If Hillary Clinton tries to spin her vote to authorize the Bush-Cheney administration to attack Iraq, it is fair to point out that almost two dozen of her fellow senators (most of them Democrats) made the right call.

There’s a general sense that fact-checking will favor Clinton. But that’s not an excuse for failing to hold both candidates to account. If Trump’s statements require that he be held to account more frequently, so be it.

Moderators should not be spectators; they should be useful participants in the process.

Moderators should not be facilitators of falsehood. It is not their job to aid or harm candidates. It is their job to make sure that viewers get an honest impression of who the candidates are and where the candidates stand, and to prevent a debate from veering dramatically off course—something that happens when contenders start arguing about who has a better grip on reality.

This does not mean that a moderator must object to every dubious statement. Some claims are open to debate. And there are, indeed, many issues where a moderator can and should let the candidates challenge each other with regard to facts and opinions.

But it is absurd to suggest, as the CPD’s Brown does, that it is somehow more “appropriate to allow the candidates to be the ones that talk about the accuracy or the fairness of what the other candidate or candidates might have said.”

That leaves the truth, and reality, open to debate.

Moderators (and journalists who serve as panelists) have a responsibility to question and challenge the candidates—especially when contenders for the presidency say things that do not make sense. That happened in 1976, when President Gerald Ford said, “There is no Soviet domination of Eastern Europe, and there never will be under a Ford administration.”

“I’m sorry, could I just follow,” interjected panelist Max Frankel: “Did I understand you to say, sir, that the Russians are not using Eastern Europe as their own sphere of influence and occupying most of the countries there and making sure with their troops that it’s a Communist zone, whereas on our side of the line the Italians and the French are still flirting with the possibility of communism?”

That was fact-checking, of a gentle sort, and it gave Ford a chance (which he never quite took) to explain himself.

Fact-checking in real time can do that. It can also settle needlessly contentious issues and allow the candidates to move on, as was the case when CNN Chief Political Correspondent Candy Crowley fact-checked the second presidential debate in 2012. Republican challenger Mitt Romney claimed that Democratic President Barack Obama did not refer to the consulate attack in Benghazi as an “act of terror” until weeks after the attack occurred. Crowley let the candidates go back and forth for a bit—with Obama saying he had referred to the incident as “act of terror” on the day after it occurred and Romney saying it took the president 14 days to use those words. Crowley finally intervened and correctly noted with regard to Obama that “he did call it an act of terror” immediately following the attack.

Romney backers ripped Crowley for stepping up to settle the dispute. But she was right to do so—and quite fair in her approach, as she also noted complaints that the White House was slow to clarify that the attack was not, as some had suggested, a part of protests over a video that offended Muslims. Most importantly, Crowley moved the debate forward; settling one dispute and clearing the way for the candidates to focus on additional issues. That’s what a moderator is supposed to do.