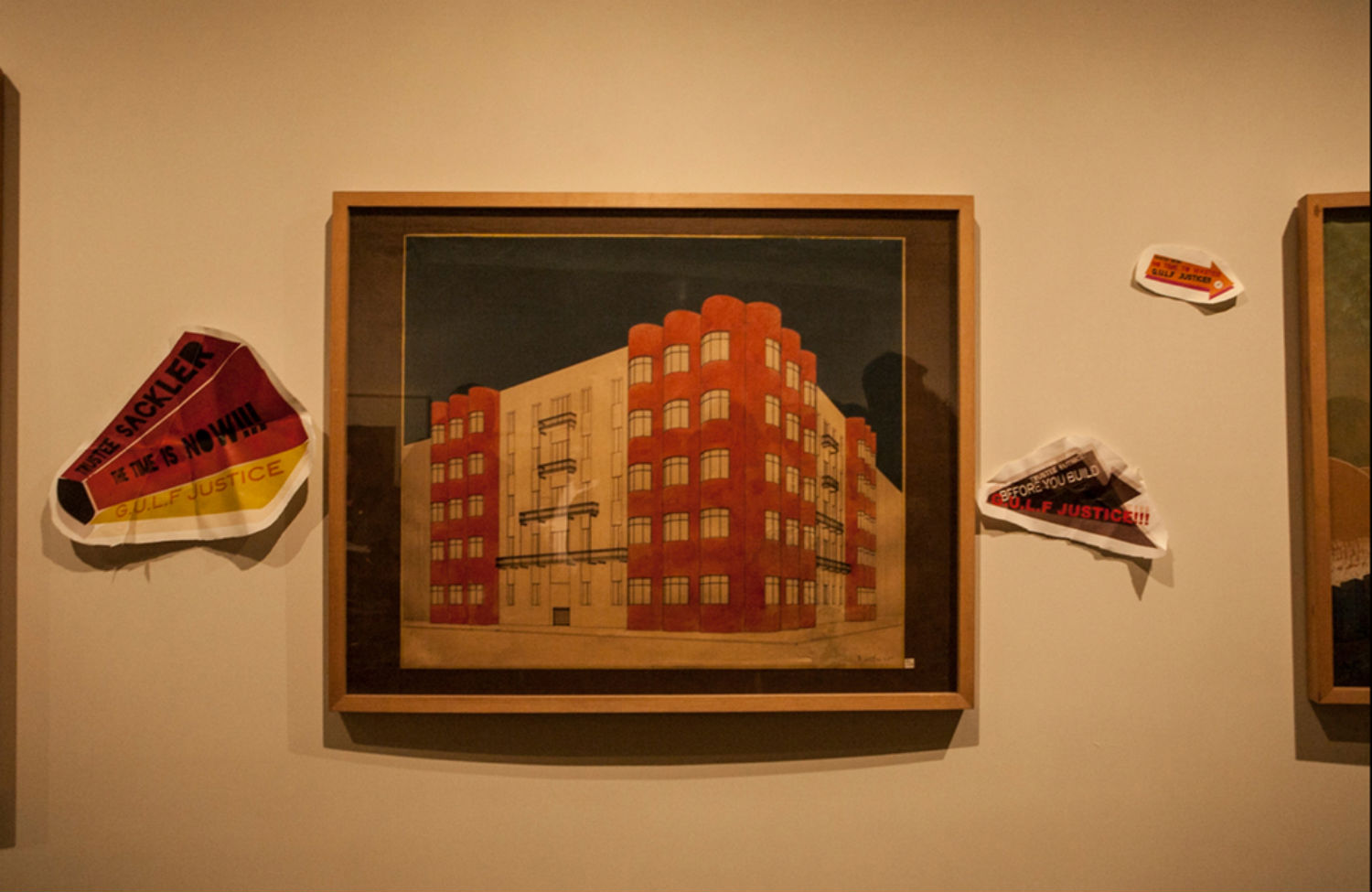 On Saturday at New York’s Guggenheim Museum, bustling crowds streamed in to see the exhibition on Italian Futurism—a motlier crowd than usual perhaps, thanks to the discounted admission. And then things got unruly. In a satirical spin on the Futurist aesthetic, a mini mob of renegade artists plastered the pristine walls with modular machine-age icons displaying kinetic slogans: “Gulf Justice Now!” and “Into the Future with Worker Dignity!”

After a brief confrontation with stern security personnel, the agitprop was removed, but the rogue art show left a lingering impression on the space. The protesters were calling out the Guggenheim’s trustees, demanding that they confront a labor crisis at the site of its far-flung construction project in Abu Dhabi. There, at Saadiyat or “Happiness” Island, legions of migrant workers labor under brutal conditions to construct an opulent oasis for the gulf’s emerging cultural elite.

For now, the paradise island is ringed by a fortress of labor camps. Since Human Rights Watch exposed egregious labor conditions at Saadiyat in 2009, investigative missions to the United Arab Emirates have revealed widespread evidence of systematic violations at the site, including predatory recruitment schemes, wage theft, substandard housing and even deportation as punishment for protesting against labor violations.

Saturday’s action was one of a series of spectacular protests staged by GULF (Global Ultra Luxury Faction) to raise awareness of labor issues at the Abu Dhabi site. As a network of artists and writers affiliated with the labor-activist coalition Gulf Labor (GLC), the group previously caused a stir with a vicious satire site and an Occupy-inspired “guerrilla projection” on the building’s facade. The GLC has targeted both the Guggenheim project and a similar project for a Louvre Abu Dhabi branch. Meanwhile, Gulf Labor and activists in the New York University community are campaigning against a parallel project for a gleaming new NYU Abu Dhabi campus, soon to open next door to Saadiyat.

The activists called on Guggenheim to press for reforms to improve working conditions and open a conversation within an increasingly insular cultural elite about the role of art in social movements. In a public statement that accompanied Saturday’s action, the group suggested a potential cultural boycott and a radical reorientation of the artistic sphere:

No artist should be asked to exhibit their work in a museum built on the backs of abused workers demanding dignity and reform. Nor should visitors be invited to step foot in such a building. The Futurists saw their art as a high-speed link to a more efficient, orderly, and hierarchical society. In contrast to the Futurists’ elitist anti-democratic sympathies, GULF looks forward to an open and engaged artworld where large institutions like the Guggenheim set a high standard for ethical practice.

In addition to urging Guggenheim trustees to lead the art world “in broadening the mission of museums everywhere,” the group specifically called for the institution of basic labor rights at Saadiyat, such as freedom of organization, an effective labor grievance process and a site-wide living wage.

Andrew Ross, a member of GULF and the GLC, and professor of Social and Cultural Analysis at NYU, sees the Guggenheim stunts in the historical context of the political foment that erupted in the 1960s and 1970s with the Art Workers’ Coalition, activist-artists who mobilized against the museum establishment. “This, you could say, is a new form of institutional critique,” Ross tells The Nation. But he adds that it is up to NYU and the Guggenheim to take the initiative to turn the museum space into a platform for political engagement. “We’re really just here to be midwives of this process and a reminder that they could turn this story around, and they could come out being ethical champions of a new era of museum making.”

Academic and arts community activists have directly approached the NYU and Guggenheim administrations, and the institutions have promised improvements in labor conditions and protections for the thousands of workers linked to its projects (NYU has issued a Statement of Labor Values for its campus and recently apologized for and vowed to investigate reported abuses).

Overall, however, the institutions and the UAE authorities have fallen far short on calls for a total overhaul of labor practices. And amid the media scrutiny, the Guggenheim and NYU can distance themselves from liability by pointing out that the construction is managed not by the institutions but by third-party contractors, through partnerships with the Gulf Emirate of Abu Dhabi and the state-affiliated development corporation, the Tourism Development and Investment Company of Abu Dhabi (for the Guggenheim and Louvre) and Abu Dhabi’s Executive Affairs Authority (for NYU).

In this socially insular, yet economically globalized petrocapital, the slickly marketed Abu Dhabi developments serve as a laboratory for experimentation with the fusion of art and capital. In contrast to the harsh conditions at the worksite, the finished product of Happiness Island will offer golf courses and luxury hotels along with branches of the Guggenheim and the Louvre. NYU’s campus will add the brand value of serving as a cultural and intellectual bridge between the UAE and the American academic scene.

But that bridge will be built by an army of migrants from the Global South—poorer countries that routinely feed labor to the gulf, primarily Bangladesh and Pakistan.

On top of receiving extremely low wages, researchers and reporters have found that many of the workers fall into virtual debt bondage after paying exorbitant fees to transnational labor recruiters. Under the Kafala system, a centuries-old scheme of indentured servitude, workers are effectively tethered to their boss and unable to leave an abusive workplace. While the UAE has regulations to prevent worker exploitation, practices such as Kafala remain structurally ingrained, abetted by the country’s legal disenfranchisement of migrants and structural economic and ethnic segregation.

According to reports by human rights advocates and news outlets, last October, after construction workers of the UK-owned BK Gulf Corporation staged a strike to protest poor wages, they were reportedly beaten and deported en masse as retaliation.

Gulf Labor knows that the Guggenheim and NYU cannot directly change the UAE’s policies. But they are pushing the institutions to leverage their cultural capital by demanding that authorities in the country allow independent oversight by the International Labour Organization. The NYU academic community can also aid the effort, Ross says, through “policy-oriented research” in the region, to generate public discussion on questions of human rights and economic globalization.

And locally, here in New York, the museum actions present a striking juxtaposition, exposing how the rarefied worlds of the arts and intelligentsia are fueled by a regressive economic policy regime stretching from the US to the UAE. Indeed, GULF’s aesthetic insurgency draws from the Occupy Museums movement, which seeks to “to connect cultural institutions to spreading economic inequality” (harkening back to leftist movements throughout the 20th century that synergized the left and artistic vanguards).

The disruption at the Guggenheim was just a visual articulation of global, grassroots demands rising outside the museum walls. Stuck between a dehumanizing labor structure and a hyper-modern development scheme, Abu Dhabi’s workers stand at a fulcrum in the culture industry. By downing their tools last October, they did more than halt construction; they put a crack in the edifice of a global labor hierarchy.