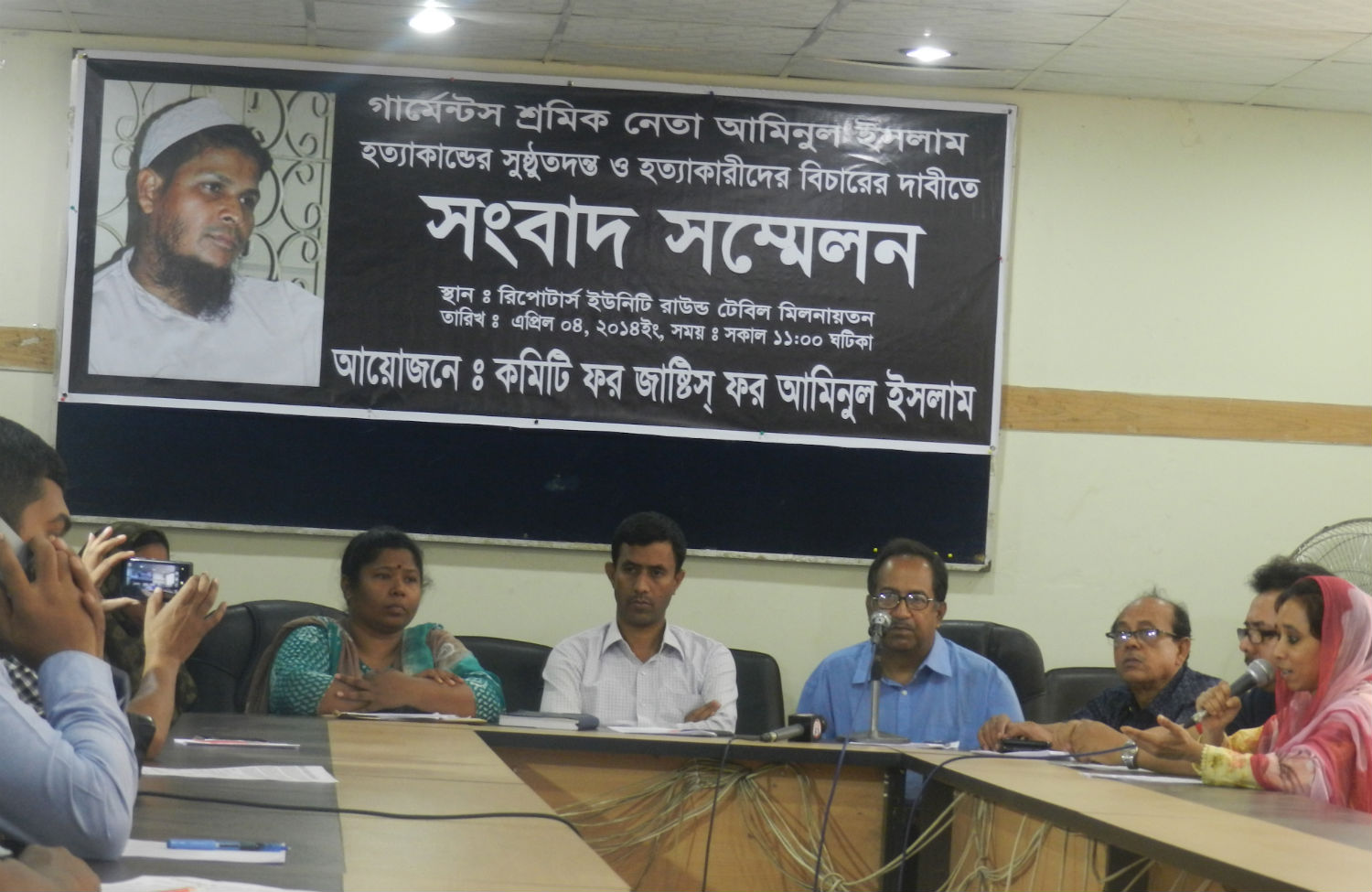 Sometimes the worst disasters come with warning signs, but we realize them only in retrospect. Months before the historic Triangle Shirtwaist Fire of 1911, workers protested oppressive and unsafe working conditions in New York garment factories, but their outcry was continually ignored by employers until the preventable tragedy erupted and extinguished scores of lives.

Fast forward a century to 2012. Roughly a year before Bangladesh was hit with its worst modern industrial disaster, the murder of a trade unionist portended the lethal dangers looming over the country’s booming garment industry. This month, labor advocates are commemorating the first anniversary of the Rana Plaza factory collapse, which killed and injured thousands of garment workers and shook the global fashion industry. And they’re also mourning the second anniversary of the death of Aminul Islam, which should have been seen as an early sign of the human rights crisis roiling in Bangladesh’s factories.

Islam’s murder was emblematic of the oppression besieging Bangladesh’s labor movement, as well as the collusion between the state and the booming garment export industry. He was a prominent advocate for workers in the factories of the Savar and Ashulia areas of Dhaka and an organizer with the internationally renowned Bangladesh Center for Worker Solidarity (BCWS). On the eve of his death, he was helping to organize workers embroiled in a labor dispute with suppliers for global brands like American Eagle.

Islam knew he was courting trouble, as the BCWS’s intrepid grassroots organizing campaigns had made activists like him a prime target for harassment and intimidation by the police and security forces. In 2010, security officers detained and beat Islam, and he was eventually “charged with a number of spurious and unsubstantiated criminal offenses despite his verifiable alibis,” according to a chronology of the case published by International Labor Rights Forum.

The trouble finally caught up to him on April 4, 2012, when he vanished suddenly after going to meet a worker who is now suspected to have been an informant, according to an investigation by the international watchdog group FORUM ASIA. His body turned up the next day, “dumped by a roadside…almost 100 kilometers north of Baipal where he was last seen,” damaged beyond recognition. He had been beaten and tortured; a hole had been bored into his right knee. His corpse was later identified by his wife only after a photo appeared in the local paper.

The savagery and secrecy surrounding Islam’s murder were, to his family and colleagues, a clear sign that the authorities were behind his killing. And the silence surrounding the case two years on, despite international condemnation, is perhaps even more telling: his killers have never been brought to justice and the government has continually stonewalled activists’ demands for a transparent investigation.

Human rights and labor groups are demanding that Bangladesh reopen the investigation, and recently sent a letter to the Prime Minister calling on government authorities to “ensure that the perpetrators of the torture and murder are prosecuted…. Your government has a responsibility to exhaust all possible leads.”

Sara Ziff, a US-based labor activist with the Model Alliance, is producing a documentary about the case. In this clip, Kalpona Akter, who now leads the BCWS, recounts the trauma of Islam’s murder and his legacy in the ongoing labor struggles in Bangladesh.

Ziff tells The Nation, “It is naïve to think that this won’t continue if those responsible are not held accountable. There needs to be a credible, independent and transparent investigation into Aminul’s death.” With the documentary project, she adds, “I hope that those who knew and loved Aminul will find peace and that his death will not be in vain.”

The Rana Plaza disaster seems like a horrific vindication of labor issues that Islam militated against. Like the labor protests that preceded the Triangle fire, Islam’s death was a signal of deeper tragedies to come—whether they would take the form of an industrial disaster, or brutal oppression of activists. Both Islam’s case and Rana Plaza were consequences of the industry’s systemic violence and the lack of labor power in the factories. And the fight continues today on both fronts, for decent working conditions and for a labor movement that can protect workers from the ferocious greed that drives the fashion supply chain.

Labor activists continue to press for change in the industry in the wake of Rana Plaza, and recent incremental victories—new factory regulation programs and labor law reforms—show that Islam’s fight has not been in vain. Yet the silence that continues to surround his case reveals that Bangladesh’s factories remain not only unsafe places to work but also unsafe places for workers to speak up for their rights. But listen closely; there will always be those who refuse to stay quiet.