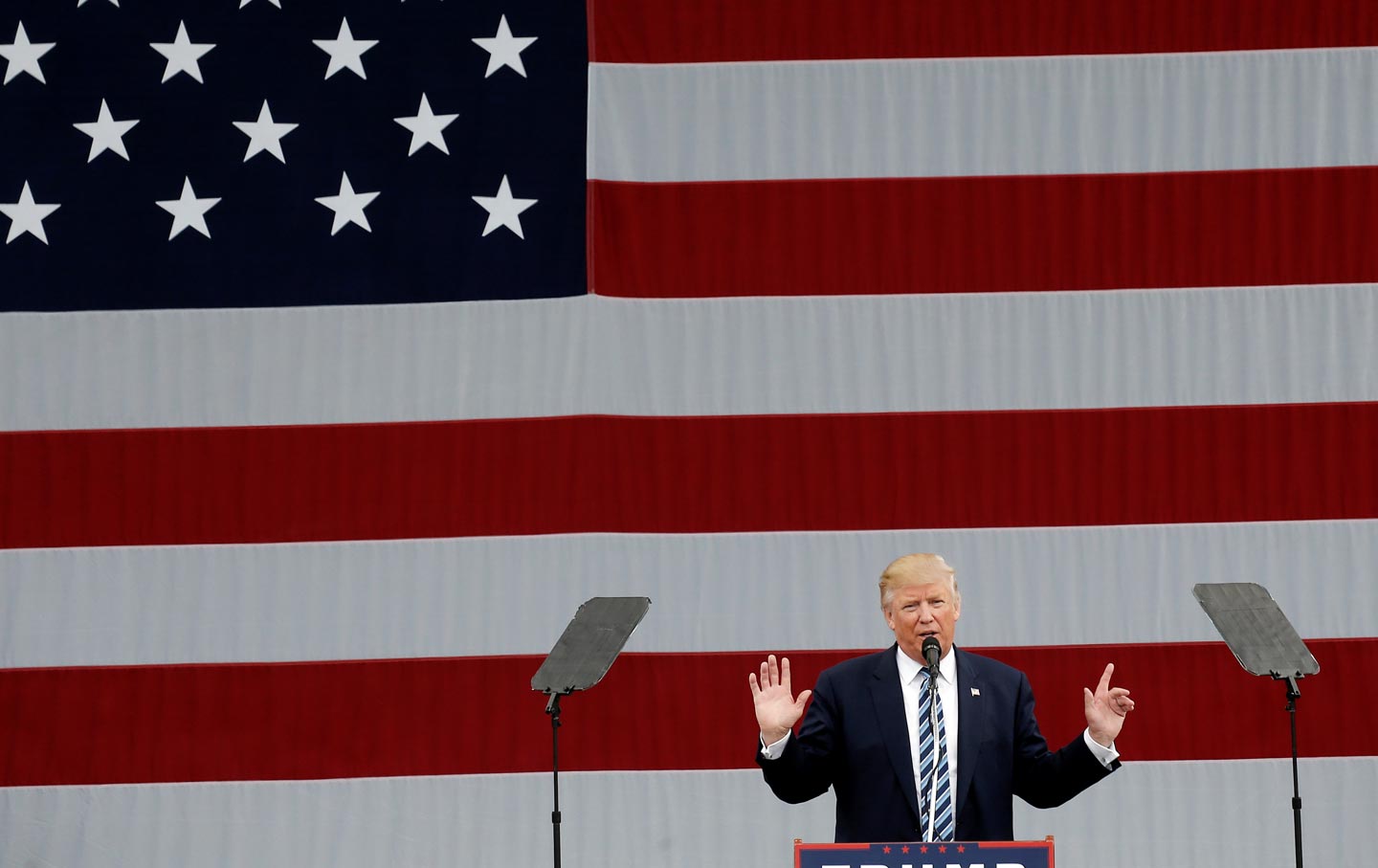 Greensboro, North Carolina— At 2 pm on Friday, as Donald J. Trump was supposed to take the stage, his surreal rally soundtrack struck up Elton John’s “Funeral For a Friend”—for the second time in about 20 minutes. Apparently his team plays it before every rally, but here it seemed a portent.1

The White Oak Amphitheatre, which President Obama packed to excess of its 7,700 person limit Tuesday night, leaving another 1,500 supporters stranded outside, wasn’t even half full on Friday. A listless crowd occasionally chanted “Trump, Trump, Trump,” but it never got momentum. As we sat waiting, yet another woman came forward, this time to The Washington Post, and claimed that Trump forced his hand up her skirt and “touched my vagina through my underwear.” A former Apprentice contestant also made abuse allegations against Trump within hours. As I predicted on Thursday, Trump is on track to provide every major news outlet with its own victim of his reported sexual abuse. Or maybe more than one.2

About a half-hour behind schedule, a swaggering Trump took the stage, and continued his crusade to demonize and deride the women who’ve accused him of sexual abuse this week, with the audience egging him on. The embattled GOP nominee seemed to notice the smallish crowd. “Lots of room!” he remarked, as though that’s a good thing at a political rally. But he plowed ahead with his defiant campaign, with a little less dark talk about “international” cabals and “bankers” than on Thursday and more talk about the “corrupt media” and the “failing New York Times”—and many more insults toward his accusers.3

Trump’s argument appeared to be that the stories couldn’t be true because the women weren’t sufficiently attractive to merit his abuse. About the People reporter who said he forcibly kissed her in 2005, he told the crowd: “She’s a liar. She’s a liar.… Check out her Facebook page. You’ll understand.” He mocked the woman who told The New York Times that Trump groped her on an airplane more than 30 years ago, “When you looked at that horrible woman last night [on CNN] I know you said, ‘I don’t think so, I don’t think so,’” going on to insist that “she would not be my first choice,” presumably to molest. He even seemed to comment on the attractiveness of Hillary Clinton, who he said “walked in front of me” during the debate, adding “I wasn’t impressed.”4

He made light of the most recent accuser, Kristin Anderson, who told The Washington Post that Trump grabbed her between the legs at a Manhattan night club in the mid-1990s. “It wasn’t a sexual come-on. I don’t know why he did it. It was like just to prove that he could do it, and nothing would happen,” Anderson said. Trump alleged that his accuser had him “sitting alone in some club,” although the Post story didn’t say he was sitting alone, and he retorted: “I really don’t sit alone that much. I don’t think I sit alone that much, honestly. I was sitting alone by myself and then I went”—and here he mimed reaching over and grabbing someone—“whaaa, to somebody?”5

“In just about all cases, it’s nonsense, it’s false.”—Donald Trump

And yet he didn’t categorically deny all of the abuse charges, leaving some legal wiggle room: “In just about all cases, it’s nonsense, it’s false.” That would seem to suggest that there are some “cases” out there that are true.6

Trump ran through his campaign’s greatest hits desultorily: “I’ll renegotiate trade deals, stop the massive inflow of refugees, and repeal and replace Obamacare.” He claimed the recent New York Times stories were a plot by the paper’s investor, billionaire Carlos Slim, “a Mexican,” to destroy him. “Reporters at The New York Times, they’re just corporate lobbyists for Carlos Slim and the Clintons,” he claimed.7

But he kept coming back to the women who have accused him of the very deed he bragged about on the Access Hollywood video released one long week ago today: that he could “grab [women] by the pussy,” uninvited, because he’s a “star.” He said at least twice, that his campaign wanted him to stay away from the accusations. “My people always say, oh, don’t talk about it, talk about jobs,” he told the crowd. “Don’t worry, your jobs are gonna be coming back to NC. But you have to dispute when somebody says something that’s fiction.”8

It was a strange crowd. A protester wearing a black watch cap was put in a headlock by a Trump supporter, an African-American man waving a rainbow flag and wearing a “Gays for Trump” T-shirt. As Obama said about pro-Trump protesters at his rally Tuesday night, it takes all kinds. I walked out with a Trump supporter—a middle-aged respiratory therapist, she didn’t want to give her name—from Virginia, who’d driven over an hour to see her candidate. She was, like me, shocked at what a small crowd turned out. But her admiration for Trump was undimmed. “This is the only person who truly cares about us, the little people. Washington doesn’t care about us. And everything Trump says is what average Americans think.”10

She also mocked the women who accused Trump of assault. “What we say in private, who cares? The other day, a bunch of women at work: We was talking trash talk, about sex and everything else, it’s what we do. None of us are saints. Who cares?” She doesn’t care if he grabbed these women against their will? “Who said he grabbed them? And lemme tell you right now: Back in the day, a billionaire had come by, I’d have been wanting him to grab me! I’m sure they were wanting him to grab them.” Then she added, “Even though I am a victim of sexual assault.” I told her I was sorry for that, and she brushed it off. “That right there with the women, if it happened, I’m sure it was wanted.”11

Across the street from the rally, in the Stamey’s parking lot, I met Bob Walker, a 72-year-old Air Force vet in a “This Veteran is One of the Deplorables” T-shirt. He was standing by his eight-wheel military convoy truck, which he said he purchased after the US pulled out of Iraq and “wasted” the $125,000 in tax dollars it cost to refurbish it. He’s a diehard Trump supporter who traveled the globe as part of an Air Force diplomatic courier squad in the mid-1960s, and he says he’s convinced “we’re turning into a Third World country, where the government tells you what you can do, how much you need to eat, what you can wear.” Obama has only made things worse.12

Walker admits he liked Mitt Romney, despite the current rift between the two men. “I am just sick of the American people who don’t educate their selves on nothing. The media did him the same way they’re trying to do Trump now, with sound bites and all that,” he said, referring to the “47 percent” video, which he compared to Trump’s Access Hollywood video. “It don’t matter, but they wanted to get him and they got him.” He fears the same thing may happen to Trump.13

Romney, however, won Walker’s home state of North Carolina. Trump could well lose it; he trails Clinton by 4 points in the latest NBC News/Wall Street Journal poll. If the difference in the size of the Obama and Trump crowds here means anything at all, Republicans have an enthusiasm gap, at least here in Greensboro, and it could threaten Senator Richard Burr and Governor Pat McCrory, not just Trump.14