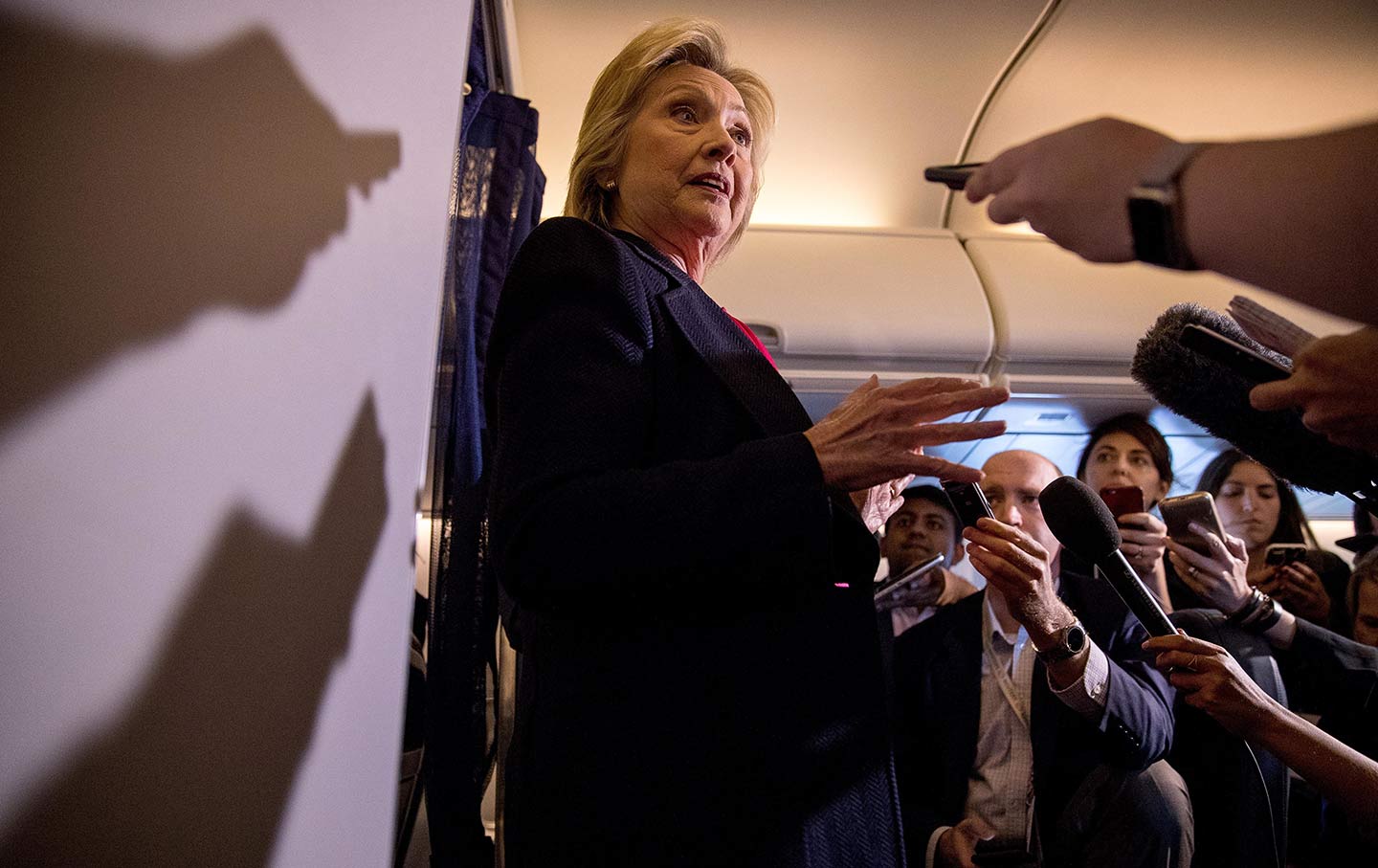 Democratic presidential candidate Hillary Clinton speaks to members of the media on board her campaign plane as she travels to Tampa on September 6, 2016. (AP Photo / Andrew Harnik)

Maybe Hillary Clinton is happy that her “overheating” at a September 11 event knocked her much-maligned remark about the racist, xenophobic “deplorables” who back Donald Trump mostly off the cable airwaves. But the media freakout over both Clinton events shows what she’s up against in this 2016 cycle: reporters who are convinced that she’s a condescending elitist with a penchant for secrecy who won’t play by the rules other candidates do—and who are doing their best to convince voters to share this view.

Now, I know what you’re thinking: There is, in fact, one candidate in the race who is a condescending elitist with a penchant for secrecy who won’t play by the rules other candidates do. And that’s Donald Trump, the first candidate in 40 years to not release his tax returns, who shared a typo-ridden one-page letter from his “doctor” that reads like it came from Hunter S. Thompson’s physician, who’s known for boasting about his wealth and calling people “losers.” My favorite Trump quote about the poor comes from a 1999 column by his friend Maureen Dowd:

“My entire life, I’ve watched politicians bragging about how poor they are, how they came from nothing, how poor their parents and grandparents were. And I said to myself, if they can stay so poor for so many generations, maybe this isn’t the kind of person we want to be electing to higher office. How smart can they be? They’re morons.”

But it’s Clinton who’s being attacked as an elitist (c’mon, Barbara Ehrenreich!) for her supposedly awful remarks about Trump’s “deplorables,” and as a secrecy-obsessed, transparency-rejecting politician for the way she handled her Sunday health scare. Double standards, anybody?

The GOP is morphing into a white-nationalist party, but Clinton is the boor for talking about it

On Saturday, she walked back her claim that bigots make up “half” of Trump backers, but not her charge about the role of bigotry in his rise. But she needn’t have. Journalists like Ta-Nehisi Coates, Jamelle Bouie, and Judd Legum have shown that Clinton was right. Two-thirds of Trump supporters believe President Obama isn’t an American (Trump’s first political crusade, you’ll recall.) Sixty percent have “unfavorable views” of Islam, while more than 40 percent believe blacks are “more violent” and “more criminal” than whites. My personal favorite data point: Twenty percent of Trump backers think Lincoln was wrong to sign the Emancipation Proclamation.

What’s really unfortunate about the media pushback, besides its unfairness to Clinton, is that it shows reporters as well as Republicans—even some Never Trump Republicans—are still uncomfortable facing the huge role race plays in animating the party’s bigoted anti-Obama, anti-Clinton base. And as long as our best reporters and commentators, along with moderate Republicans, ignore that uncomfortable truth, they’re showing us how they both aided in the rise of Trump, and why Trumpism won’t go away, even if he loses. Even after Donald Trump Jr. and Trump adviser Roger Stone shared a “Deplorables” poster that included them, Trump’s father, and the racist “alt-right” Pepe the Frog meme, the media was still flogging Clinton. One of the nation’s two major political parties is morphing into a white-nationalist party, but Clinton is the boor for talking about it.

The Clinton rules won’t only hurt Clinton this time; they could elect Trump, and destroy the country.

On Clinton’s “overheating” incident, in broiling humidity at the 9/11 memorial on Sunday, the media failure to calmly report facts and avoid hot takes (no pun intended) is just as remarkable. It turns out Clinton, who’s been suffering from a bad cough, was diagnosed with pneumonia on Friday. Apparently, respiratory illnesses have felled others in her tight-knit, overworked Brooklyn headquarters. The candidate made a decision to continue campaigning nonetheless and had seemed fine until stuck for 90 minutes in bright sunshine and sweltering humidity in a blue suit with a high-necked shirt. (If only she could rock a sundress, but she’d probably be shamed out of the race.) Feeling ill, she left without a media pool, to rest for an hour at daughter Chelsea’s apartment.

First reporters squawked that she’d left without a pool. Mind you, Trump doesn’t have a pool, so when he left the event early, too, nobody even noticed. Then they squawked about her failure to produce a doctor’s report explaining what was wrong; when she produced a doctor’s report of her pneumonia diagnosis, they squawked “Secrecy!” Even David Axelrod, who’s turned into a lamentable concern troll this cycle, tweeted:

Antibiotics can take care of pneumonia. What’s the cure for an unhealthy penchant for privacy that repeatedly creates unnecessary problems?

But that made me wonder: What other sorts of maladies must she immediately disclose to us? Sure, voters ought to know about a diagnosis of cancer, Parkinson’s, a heart attack, a stroke; anything that signals major health problems that could interfere with doing her job. But what about hemorrhoids? A bladder infection? Stomach flu? Clearly, Clinton chose to go on with her campaign and had done so successfully until Sunday morning. Why did we need to know about her bout with pneumonia the minute she got it? What brand-new standard is that?

The truth is, reporters have been primed to freak out about Clinton’s health by the right-wing sludge factory, which has managed to pollute the waters of mainstream discourse with phony rumors about her supposed maladies spread by Dr. Sean Hannity, the dumbest man on cable news. This had already led some in the media to call for Clinton to release more of her medical records—even though the four-page letter from her doctor she produced earlier this year shared far more information than the farcical, typo-ridden one-pager produced by Trump, which called him “the healthiest man to ever seek the presidency.”

I think questions about Clinton’s health are legitimate, and we needed to know what felled her Sunday morning. By afternoon, we found out—and for a lot of reporters, it still wasn’t enough. This is a dangerous game. The so-called Clinton rules won’t only hurt Hillary Clinton this time; they could elect Donald Trump, and destroy the country. Maybe some of our nation’s finest media figures should go see a doctor and get treatment for their chronic inability to see the big picture in this race.