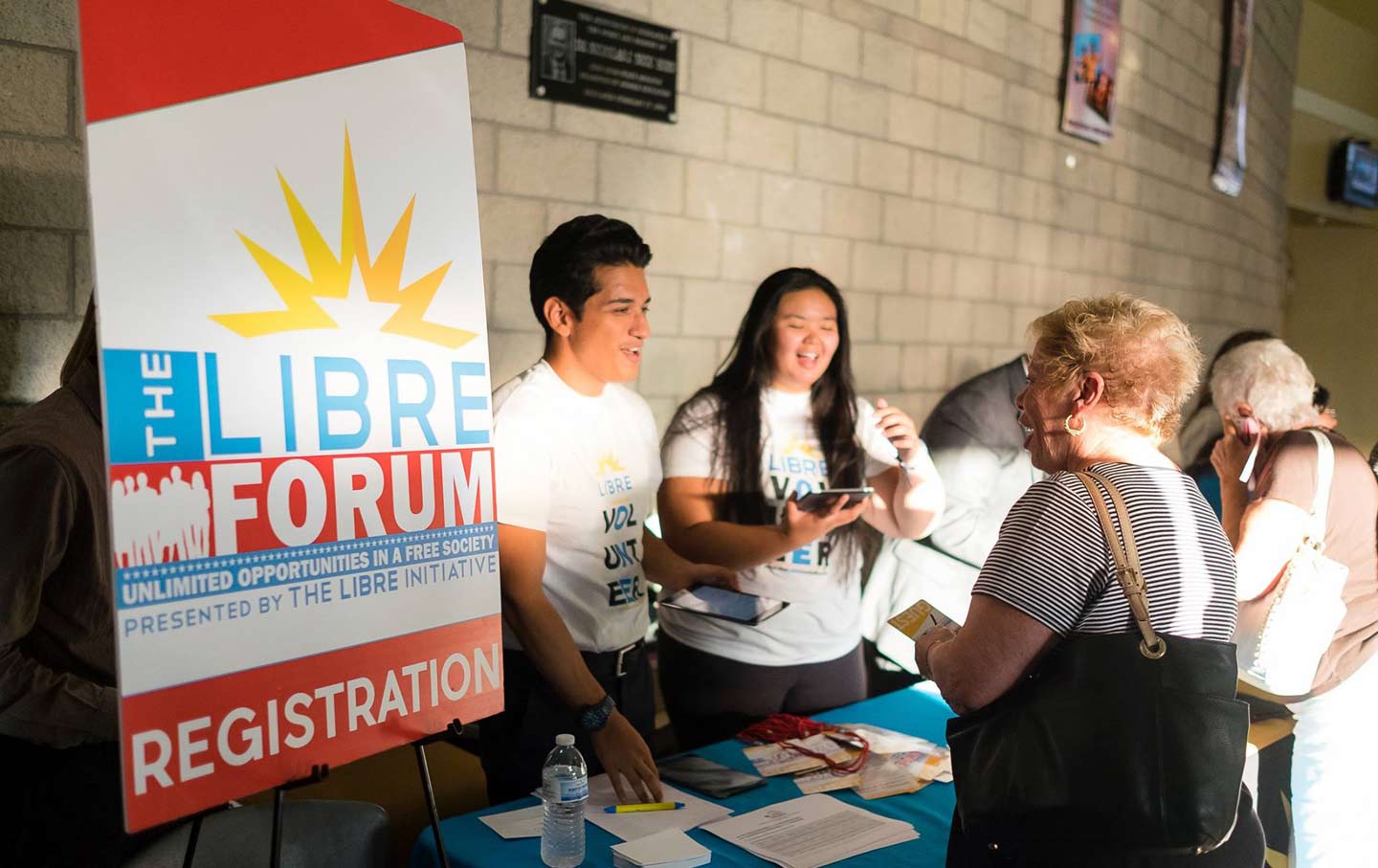 On Tuesday afternoon, Ronnie Najarro sat in the converted four-bedroom home in Las Vegas that serves as his office, working on the future of the conservative Latino movement. That work had nothing to do with the Nevada Republican caucuses, which were just hours away, and which Donald Trump handily won, besting his closest rivals, Ted Cruz and Marco Rubio, by a double-digit margin.

Instead, it was just another day of work for the Nevada state director of the Libre Initiative, a group funded by the conservative donor network run by Charles and David Koch. Najarro had wrapped up his morning radio talk show, a 15-minute segment that runs Tuesdays through Fridays on KENO 1460AM, a Spanish-language sports station in Vegas. Najarro’s show is called Generación Libre, or “Free Generation,” and is inspired by the name of his parent organization.

“We talk about our plans, our events, our activities,” which include an upcoming concert starring the Latino Christian singers Karina Moreno and Hermanos Medina, and a driver’s licenses exam workshop set for March. “But then we also talk about issues.” That usually means conversations about property rights, rule of law, but first and foremost, free enterprise. And that, in a nutshell, is how the savvy and rapidly growing Libre Initiative operates. The group is playing the long game, which is why it’s sitting out the 2016 presidential primaries.

“Number one with Hispanics,” Trump said in his victory speech on Tuesday night. “I’m really happy about that.”

Like any good organizing campaign, though, the group regularly heads out on weekends to knock on doors and chat with Latinos about the ills of government regulation. They hit up 1,000 homes in both February and January, Najarro says. And like any decent community-services organization, they also offer the kinds of services Latinos need and crave. The New Mexico office of Libre runs English classes. Libre hosts back-to-school nights, health checkups, financial planning, and GED completion courses. Najarro is preparing for Libre’s seventh driver’s license–exam workshop, called Pasa la Prueba, or Pass the Test. The exam-prep courses are so successful and so accessible (they’re not just conducted in Spanish, they’re also free) that Libre’s become well-known for them; they draw hundreds of Latinos at a time to a swap meet in Vegas.

And, like any savvy political organization, Libre is also aggressive about earned and paid media. The group has bought television ads slamming Obamacare, gotten op-eds published about the the Venezuelan elections, and regularly advertises its work and programs on radio, over e-mail, through digital marketing, and mailers. Every spot includes their message of self-reliance and unfettered free enterprise.

Saturday morning chats about property rights and the rule of law sound awful heady, I tell Najarro. He says Libre’s volunteers make it a casual conversation. “We tell them a little bit about ourselves, what we offer the community, and then we ask them, ‘Have you ever heard of economic freedom?’ And a lot of Hispanics have not heard of economic freedom.”

“It’s twofold,” Libre’s founder and executive director Daniel Garza told me earlier this year. “It’s getting into communities, and it’s the culture to develop self-reliance and personal responsibility. And it’s talking about a free society and removing barriers to achieving success and opportunity.”

Garza, the son of farmworkers in Washington State’s Yakima Valley and a former White House staffer in George W. Bush’s administration, launched Libre in 2011 on the certainty that there were other conservative Latinos out there like him. The group, with a staff of 70 and plans to grow to 100 this year, operates in states with significant Latino populations, many of which also happen to be key battleground states—Nevada, Colorado, Florida, North Carolina, Virginia.

Garza cites Pew’s 2012 poll which found that 32 percent of Latinos self-identify as conservative, and another 31 percent identify as moderate. Not only that, even though 71 percent of Latino voters supported President Obama in 2012, just 48 percent of the eligible Latino electorate turned out to vote that year. Garza doesn’t think the 2012 election results tell the whole story of Latinos’ political preferences, or potential. In Garza’s calculations, tens of millions of Latinos have been overlooked by both parties.

Indeed, conservative Latinos not only exist, they made headlines Tuesday night. According to CNN entrance polls, 45 percent of Nevada Latino Republicans backed Donald Trump in the Nevada Republican caucuses, far surpassing Latinos’ support for Trump’s two Latino rivals, Cruz and Rubio. “Number one with Hispanics,” Trump said in his victory speech on Tuesday night. “I’m really happy about that.” Trump’s third straight win was made all the more stunning by the entrance poll results.

So who are these conservative Latinos? They have broad policy priorities, and not all went for Trump last night. Karla Fajardo, a home help nurse, backed Ted Cruz because as a born-again Christian, she fears for the future of the country. Her biggest priority is to see Planned Parenthood shut down, and a rejection of same-sex marriage. Cruz, she believes, “love this country, and loves the Constitution.” Born in Nicaragua, Fajardo was once an undocumented immigrant, but says she’s less concerned with Cruz’s hardline positions on immigration because there are new threats like ISIS and human trafficking which she says didn’t exist when she became naturalized in 2006.

Plenty of Latino families were split. Fabiola Huerta, 25, brought her husband Noel, 26, to a Marco Rubio rally on Sunday night to try to win him over to Rubio, whose positions on immigration she respected. “I was going to vote for Jeb Bush,” Fabiola said, but switched when Bush dropped out. Noel, a Marine corps veteran who served in Afghanistan in 2008, preferred Ted Cruz because of Cruz’s unequivocal objection to regulation of the gun industry. “And Marco Rubio doesn’t talk about that issue as much as Ted Cruz does,” Noel said.

Jessica Hernandez and her husband Roberto were in a similar tug of war. Jessica is Puerto Rican and Roberto is Cuban. “Immigration is not the most important to me,” Jessica said. “Right now I decide Marco because he will eliminate Obamacare.” Since the Affordable Care Act has gone into effect, Jessica says, the family’s health insurance costs have gone up from nothing to $200 a month, a serious burden on the budget they draw from Jessica’s job as a casino porter and Roberto’s work in robotics. Roberto said he cared most about blocking any regulations to gun ownership. “I do have guns at home,” Hernandez said. “I’m from Cuba, and I think that type of regime happens because people don’t have guns.”

Still, at the moment, Karla Fajardo, the Huertas and the Hernandezes are the minority in the Latino community. And Libre knows that.

“We know we’re up against decades and decades of indifference from the conservative side toward the Latinos,” Garza said. And so he sees his job as first becoming a trusted presence in Latino communities and also sharing the conservative principles he makes no apology for pushing. Conservative Latino infrastructure is in its nascent stages of development. The Republican party’s own famous 2012 election post-mortem memo acknowledged that the party needed to improve its outreach to Latinos and other voters of color. And in 2013, the Republican National Committee followed its own advice by hiring Jennifer Sevilla Korn to run a Latino outreach program. But Garza acknowledges he’s not only moving against the tide of the strongest Latino advocacy groups and the nation’s largest unions, but also against the tone of the current Republican campaign. “I don’t care. What matters to me are ideas, not parties, and not people,” he says.

Libre isn’t totally ignoring the campaign, though. It objected publicly to the anti-immigrant rhetoric that shocked many early in the presidential campaign season (but which has now become a standard part of this election). And it will likely encourage voters to go to the polls in November, Najarro says. And it did organize 20 volunteers from Calvary Chapel Lone Mountain Church in Las Vegas on Saturday to knock on doors on the same day as the Democratic caucus. Najarro laughs when I ask if the timing was organized to intentionally disrupt the caucusing. “Look, we do them all the time,” Najarro says. “And we have a concert coming up this coming weekend and we need to get the word out.”