One day before the special election to fill the late John Murtha’s Pennsylvania House seat, Democrat Mark Critz and Republican Tim Burns are in a dead heat. President Bill Clinton and Sen. Scott Brown have come to campaign for this prize seat, but by far the politician who towers over this race is Nancy Pelosi.

It’s bad enough to be unmanned by a 50-foot-tall Nancy Pelosi. But then, in the same week, we were treated to the spectacle of conservatives jumping up on their chairs at the prospect of the 5-foot 2-inch Elena Kagan skittering into a seat on the Supreme Court. Tall or “Shorty,” powerful women will soon enough be in a position to give every right-thinking man in America a burp and a spank.

Repubs won’t admit it, of course. According to the ad, one of several animated attacks on the Dems by the North Carolina-based Right Change, it’s men who are manipulating the monstrous Nancy to destroy America with her lust for higher taxes and bigger bailouts: You can’t help but notice that President Obama and Senate majority leader Harry Reid are carefully shown to be Nancy’s Drs. Frankenstein. But that’s a fluttering fig leaf meant to hide from the right’s very own eyes the fact that their tough guys—the same ones who bullied us into two wars while simultaneously handing our economy over to a bunch of corrupt and incompetent sharpies–are fighting a girl. A girl who, by running her house so much better than Reid has his, is widely recognized as the most stalwart Democrat in the country (and one whose national poll ratings, according to the Research 2000/DailyKos poll, are consistently higher than Reid’s, GOP House leader John Boehner’s or Senate minority leader Mitch McConnell’s–and in that order).

From Limbaugh’s slurs on “feminazis” to the “No Dem Girlz Alowed” club of GOP congresspeople who shouted down every female Dem rep during the healthcare debate with echoing cries of “I object!,” conservatives are used to swinging their big sticks and getting results. But when suddenly those tactics don’t work–when Western capitalism fails and American exceptionalism withers—they get extra mean.

The right has valiantly tried to demonize Pelosi, like Hillary Clinton before her. Merely being a powerful woman made her an irresistible symbol of liberal wantonness–the hint of transposed sexual power usually does—but so far, simply declaring her as such hasn’t gotten the GOP very far. So the folks at Right Change figured, reasonably, that humor and a $174,000 ad buy for Republican businessman Burns might at least introduce the idea of control-freak liberal women on the loose to the general public. And you have to admit that Right Change’s gentle caricatures have the comic chops—a spot showing an animated Obama talking terrorism in a tam-o’-shanter while playing golf is pretty funny in mocking his too-laconic response to bad news (even if its inspiration is the famous video of W denouncing international terror and then urging the assembled press to “watch this drive”).

But the Jimmy Neutron-like animation does little to update the source of their parody: The 1958 movie Attack of the 50-Foot Woman, whose protagonist was also named Nancy. This Nancy wasn’t out to destroy the social contract, just her cheating husband (named Harry, semi-coincidentally) and his floozie. But in those early Mad Men years, a vengeful five-story-tall woman was a psychologically revealing concoction. The economic importance of women, as consumers of goods and culture, was beginning to boom, just as so many newly liberated post-war women seemed out of the reach of any man stuck in a pre-war vision of a woman’s place. Moviegoers could anticipate not only the Atomic Age anxiety of being crushed by an unnatural monster, but the pleasant possibility of glimpsing a gargantuan naughty bit as the 50-foot-tall woman outgrew her puny human couture. 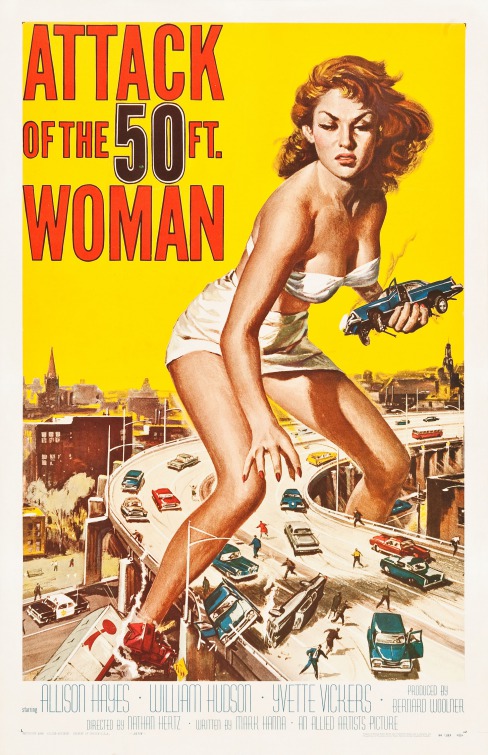 Will America never tire of domesticating its nightmares? Fifty-foot women have only grown since the days of ducktails and doo-wop. By the 1993 remake of the film, Nancy had become more sympathetic. By 2009, Susan, the 49-foot 11-inch heroine of Monsters vs. Aliens, realized that hanging out with the Creature from the Black Lagoon and a mad scientist with the head of a roach is better than getting married to a self-involved TV weatherman. Oh, and Susan gets to save the world: Big, powerful women do good.

It’s not that Republicans have a problem with all strong women: Anti-Obama, Tea Partying gals who shout “I want my country back!” are always encouraged to rise up, at least to an ursine height. The zoologically zany Sarah Palin, who enjoys her rep as a pitbull and a barracuda while shooting wolves from planes and openly preferring Alaska’s animals “right next to the mashed potatoes,” gave an audience (of conservative “sisTAS!”, as she put it) a new animal identity last week: "If you thought pit bulls were tough, you don’t want to mess with mama grizzlies!" She then conjured a parade of Republican women politicians seizing political office as a “stampede of pink elephants.”

Don’t laugh at Sarah for mixing her metaphor up with a popular one for drunkenness. The real point is that for the right it’s herd-thinking and size that counts. Which probably goes a long way toward explaining all these giant women populating their imaginations: The GOP, with good reason, is really worried about shrinkage.