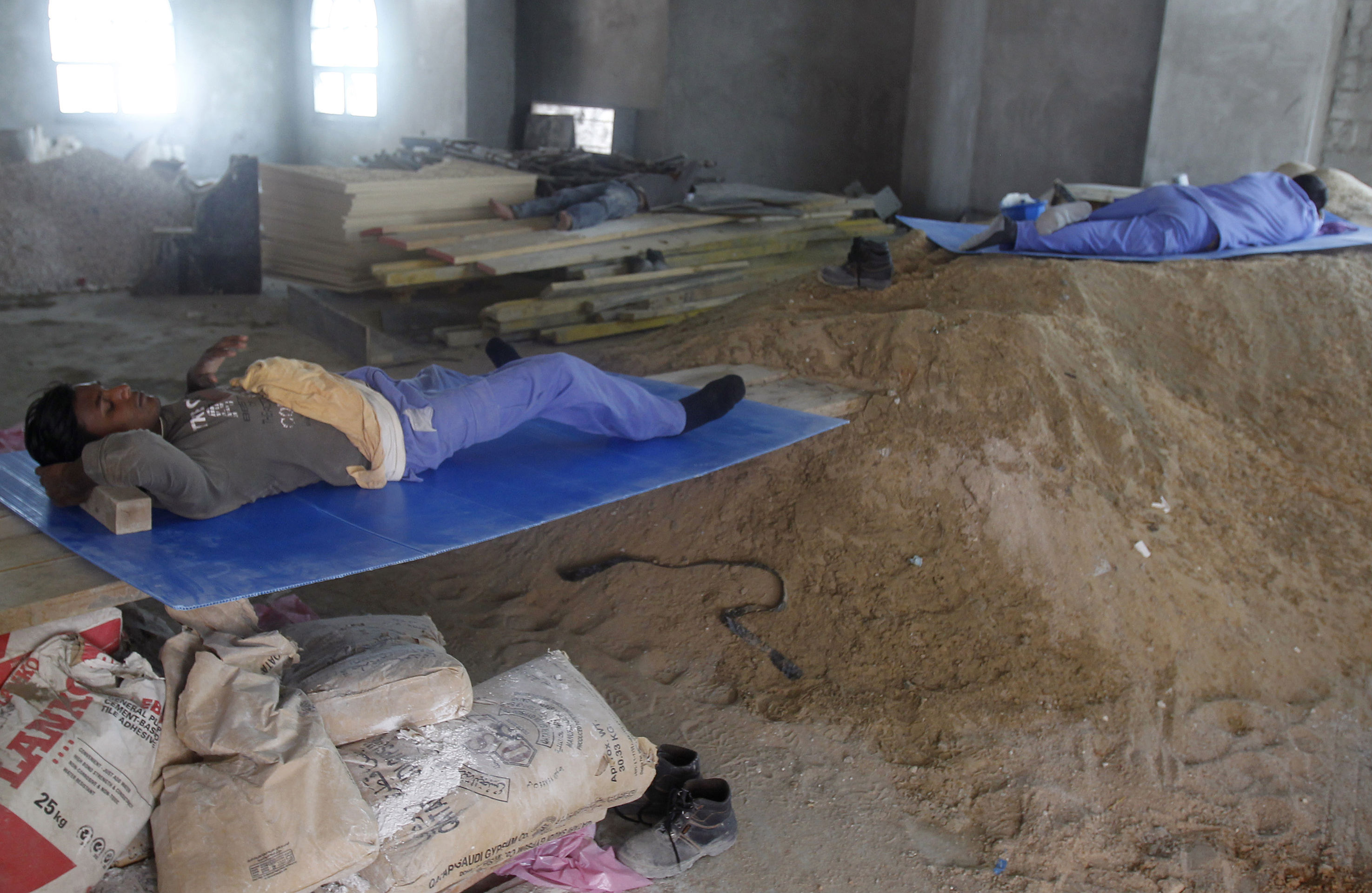 Migrant construction workers on the outskirts of Doha, Qatar (Reuters/Stringer)

This summer, the populist fervor of Brazil’s World Cup sparked riotous street protests against the country’s economic hierarchy. But the 2022 World Cup in Qatar is being built in an even more unequal country, and there will likely be little public unrest, just vast expanses of deserts and skyscrapers, where the country’s poorest workers are forced to toil in silent captivity.

In this miniature oil empire, a tiny elite lords over an impoverished majority of imported workers. Now that thousands of those migrants are constructing the state-of-the-art arenas and gleaming modern transit hubs of world football, rights advocates are pushing for an abolition of Qatar’s medieval labor regime.

Human rights activists estimate the true costs of the World Cup in terms of the rising migrant death toll, estimated at about 1,200 nationwide since the World Cup was awarded, projected to reach 4,000 by the time the games begin. According to advocates, the harsh labor conditions at the game sites and surrounding infrastructure have led to a massive fatality rate; causes range from construction-related injuries to cardiac arrest to suicide.

In recent weeks, the Qatari government has presented reform plans such as strengthening employment contract law, improving housing standards and better regulating wage payments. Though it has shown more openness to labor reform than other Persian Gulf states, the government disappointed advocacy groups by stopping short of endorsing a minimum wage or unionization rights, and providing no set timetable for policy changes. Recently, the Qatar Foundation, a quasi-governmental think tank, issued one of the most extensive analyses yet of migrant labor issues, with similar reform recommendations, but still did not endorse the radical changes that rights groups have demanded.

Though the reform proposals encourage greater transparency and oversight of employers, along with international collaboration with migrant’s home countries, they basically leave intact (aside from a name change) the traditional structure of labor sponsorship, known as the kafala system, which activists say is at the root of the mistreatment and exploitation of migrants.

Investigations by media and advocacy groups like the International Trade Union Confederation (ITUC) and Human Rights Watch have revealed that workers bound by kafala, mostly from South Asia, often live in squalid encampments, labor all day in hazard-prone, sweltering building sites and often suffer fraud and wage theft. But the social and political isolation cuts the deepest. Workers are legally captives of their employers, blocking them from changing jobs or leaving the country.

The Qatar Foundation’s report, authored by the migration studies scholar Ray Jureidini, recommends developing “standardized ethical recruitment practices in the labor sending countries” and cutting down on excessive recruitment fees that put migrants in heavy debt. The report also recommends standardization and transparency in contracting. Nonetheless, it does not address workers’ needs for freedom of movement and the autonomy to break from an employer or leave the country. It also dismisses the idea of an equal pay law, arguing that “Qatari citizens have the highest GDP in the world,” so comparable wages for poor foreigners would be unfeasible.

Activist warn that whatever the law states, migrants in the kafala system typically have almost no legal recourse against abusive employers or protection from retaliation for challenging authority. The ITUC’s report on Qatar labor quotes a driver from the Philippines: “we are afraid to complain to the authorities. We see that workers who do complain are either blacklisted, deported or threatened. Our managers told us that workers who go on strike get deported within 12 hours.”

Even when migrant contract workers lose their jobs, they may end up stranded indefinitely if their employer does not give permission for them to return home. Workers who run away or are “abandoned” by their bosses might wind up homeless, unemployable and trapped on foreign soil.

Besides the World Cup labor camps, female household workers are even more vulnerable to abuse, as well as sexual violence. Thousands of domestic workers reportedly flee their bosses each year. A domestic worker, who ran away from a boss who had raped her, told the ITUC: “When I see a Qatari man, I am always afraid because I am thinking they will catch me and put me in jail, and send me to the Philippines. Running away from your sponsor is very difficult because I don’t have any legal papers, and then I cannot get a good job.”

Rights groups say the problem of migrant labor in Qatar is not simply that laws are not followed or enforced but that contracts are often used to control workers rather than to establish a mutual partnership, and thus lock them into an extremely oppressive system.

Union activists have called for a full abolition of the kafala system and guarantees of a minimum wage, freedom of assembly and collective bargaining, in accordance with international labor standards. The ITUC has even pushed for a rerun of the Qatar vote to stop the games altogether.

ITUC General Secretary Sharran Burrow tells The Nation via e-mail that the Qatar Foundation’s latest recommendations will be toothless unless migrants are guaranteed equal treatment and access to justice:

None of the reforms proposed in the Qatar Foundation report are going to work without rule of law, including a competent and fully-staffed labour inspectorate and a functional judiciary. If you look at the thousands of workers trapped in deportation centres, or with unsolved complaints, this is nowhere in evidence in Qatar. Once again, Qatar has shown a blind spot on the fundamental right of freedom of association. Not a word is mentioned in the Qatar Foundation report about Qatar meeting it’s international obligations.

But another challenge to reform is Qatar’s social and cultural anxiety about the country’s huge demographic imbalances. Qatar has one of the highest ratios of migrants to citizens, with foreign workers making up some 85 percent of the population.

James Dorsey, longtime observer of Mideast soccer politics and senior fellow at Nanyang Technological University in Singapore, says that while the “enlightened autocracy” that rules Qatari society might be open to basic improvements in working conditions, the fundamental shift needs to begin on a cultural level. If Qatari officialdom ultimately decides to broach political issues like union rights and freedom of association, he says, it would follow “as a consequence of” other social and political restructuring as the country faces the fallout of minority rule.

At the same time, change is being accelerated by public pressure, as Qatar faces greater worldwide scrutiny in its bid to gain “soft power” through cultural and commercial investments.

“What the Qataris are realizing is that their winning of the right to host the World Cup not only gave them leverage, but gave others leverage,” Dorsey tells The Nation. “So suddenly…groups like Amnesty and Human Rights Watch, they have moral authority,” amid the public outcry over worker deaths. “The ITUC,” he adds, “potentially has 175 million members in 153 countries, presumably a majority of those members are football fans, so it can actually move bodies.”

The upshot of World Cup 2022 is that in the glaring spotlight of football’s globalized populism, Qatar is finally being held to account for labor abuses that would otherwise be dismissed as just the cost of doing business. And fans around the world will now see that their fellow workers have paid the ultimate price for a few days of sporting spectacle.