Both socialists and people favorable to ‘Indivisible’ are perfectly fine with primary challenges. (Corey Torpie / Courtesy of the Ocasio-Cortez Campaign)

Some of the most popular and electric members of the new Democratic House got to Washington by running primary challenges against incumbent Democrats. That doesn’t mean the leadership wants to see more of that, however. Representative Linda Sanchez, a former vice-chair of the Democratic caucus, told Politico recently that many of her colleagues wish the liberal groups backing insurgent candidates “would recognize that our own members aren’t the enemy.”

But top-down discouragement of primary challenges may no longer work for Democratic leaders. The 2018 midterms changed all that: the local Resistance groups that popped up across the country and helped fuel Democratic midterm victories are much more open to boosting primary challengers than most people realize.

Moreover, the reluctance of top congressional Democrats to pursue aggressive oversight of the Trump administration might further fuel Resistance voters to support competitive primaries. This week, House Speaker Nancy Pelosi threw cold water on impeachment by calling it “divisive” and declaring that any push must be “bipartisan.” The House Ways & Means Committee has not yet demanded Trump’s tax returns, though it has the power to do so, and House Oversight Chairman Elijah Cummings has argued that investigating Trump’s children may harm public opinion of Democrats.

Will the voters who showed up in 2018 to demand accountability return in 2020 to punish the Democratic establishment for lax oversight? We do know, thanks to a Data for Progress/YouGov Blue survey of Democrats, that a majority of Democrats already believe primaries make the party stronger. Democrats with favorable views toward Indivisible—the progressive advocacy group, formed in the wake of Trump’s 2016 victory, which inspired thousands of grassroots activist coalitions—are more supportive of primaries than Democrats as a whole, as are self-described “socialists.” 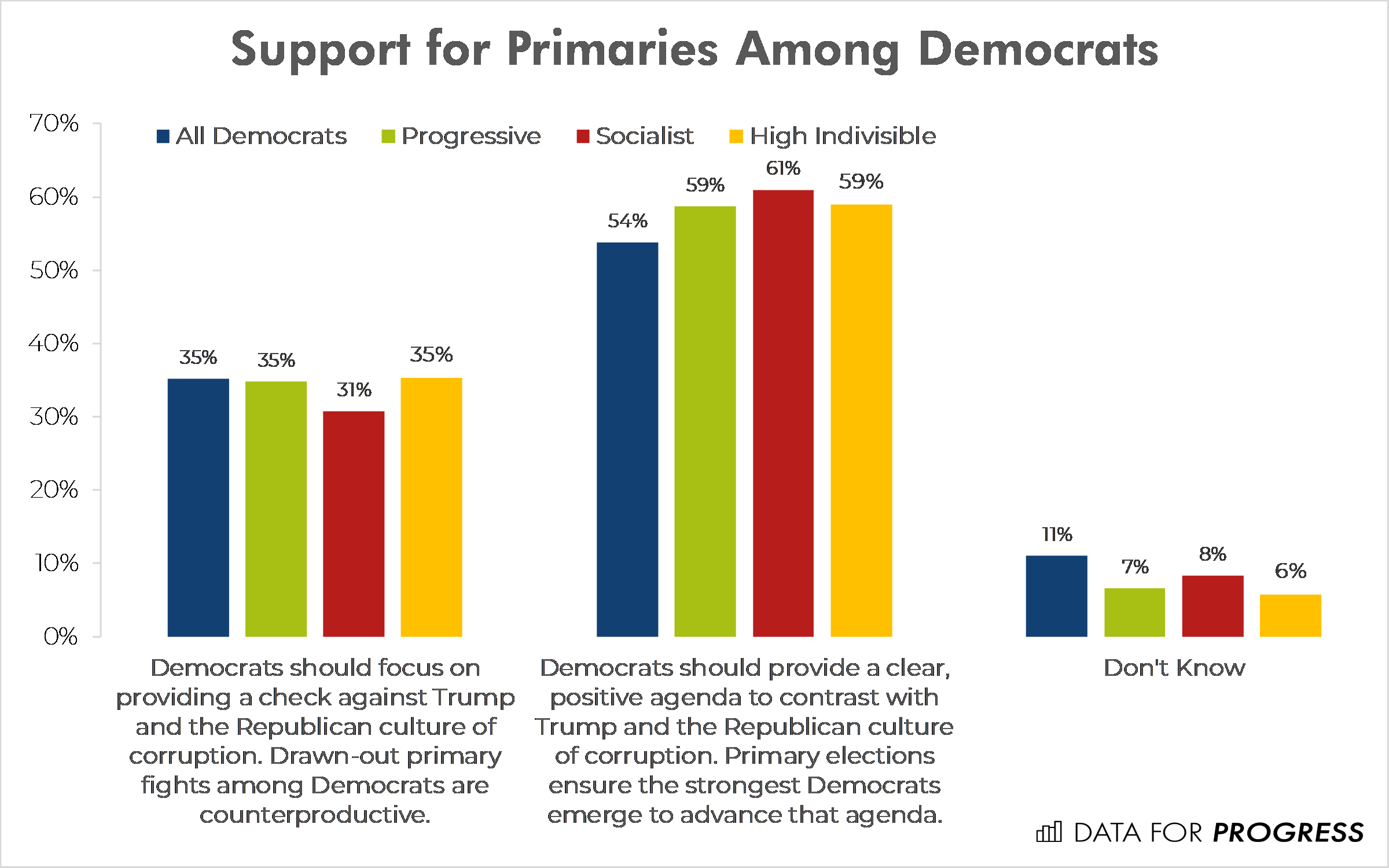 Support for primaries among Democrats (Data for Progress)

This should worry incumbent Democrats, because Indivisible and other Resistance groups are rooted deeply in local politics and attract the type of voters who show up to vote in primaries. Last cycle, Indivisible supported two primaries in Massachusetts alone: an unsuccessful challenge to Representative Richard Neal (who chairs of the House Ways & Means Committee, and is single-handedly delaying the push for Trump’s tax returns), and Representative Ayanna Presley’s successful challenge to Mike Capuano in the seventh district.

Already, primary showdowns are percolating across the country for the 2020 elections. And not all of the potential challengers are low-experience lefties trying to push out a more centrist member. Rather, a quick survey of these potential races shows that robust primaries might be becoming broadly common in Democratic politics, as veteran politicians who used to play the wait-your-turn game have grown impatient.

Take Colorado, where Representative Diana DeGette is facing another primary challenge after she easily fended one last cycle by a 68-to-32 margin. This time, DeGette faces a much more politically experienced opponent—Crisanta Duran was formerly the speaker of the Colorado House and a candidate who was seen as a top Senate recruit.

In New York, there are as many as nine primary challenges brewing. In the Third Congressional District, Robert Zimmerman, a former donor to Hillary Clinton and long-time advocate who is active in the district, is looking at challenging Representative Tom Suozzi, a Democrat who goes on Fox News to talk about how much he loves Immigration & Customs Enforcement. In the fourth, Representative Kathleen Rice may face a challenge from Kevan Abrahams, a Nassau County legislator; Rice recently compared Representative Alexandria Ocasio-Cortez to Donald Trump. In the ninth, Adem Bunkeddeko, the son of Ugandan refugees and a community organizer, is gearing up for a rematch against Representative Yvette Clarke following a three-point loss in 2018. He received an endorsement from The New York Times last time around—the paper urged voters to “give this promising newcomer a chance.”

In New York’s 10th, Representative Jerrold Nadler faces a potential challenge from Lindsey Boylan, a former adviser to Governor Andrew Cuomo. Nadler is the powerful chair of the House Judiciary Committee, but if the House indeed does not pursue impeachment, it could end up powering Boylan’s challenge. As the Times noted, billionaire Tom Steyer has already polled the 10th district to see how many voters favor impeachment, and if the Judiciary Committee decides not to pursue it, perhaps Steyer could fund a push to unseat Nadler.

Representative Carolyn Maloney will almost certainly face another challenge from Suraj Patel, who told the Times, “We deserve a congressperson who isn’t recklessly indifferent to the less privileged.” In the Bronx, at least three candidates are looking at a challenge in the 15th Congressional District and several others are looking at the 16th, where Representative Eliot Engel represents a majority-minority district, but has been a vocal critic of freshman Representative Ilhan Omar over her recent comments about Israel.

In New Jersey, Zina Spezakis is preparing for a challenge against Bill Pascrell, citing the urgency of climate change. In Hawai’i, Daily Kos has already endorsed State Senator Kai Kahele in a primary against Tulsi Gabbard—-who is running a quixotic campaign for president (Kahele also has the endorsements of two former governors). Recently, Michael Owens, the former Cobb Democratic Party Chair, has made moves indicating he might be gearing up for a primary against Representative David Scott in Georgia’s 13th.

In a very visible example of a primary challenge, Justice Democrats have already drawn a target on Representative Henry Cuellar. Primaries for Progress recently released a 3,000-word exploration of his career, which surfaced new legislative initiatives he pursued in the Texas statehouse, including a bill that would have required people to intervene to assist police officers making arrests. In Illinois, Representative anti-choice Democrat Dan Lipinski will almost certainly face another primary challenge. (His 2018 opponent, Marie Newman, recently started a CrowdPac fund.)

In Virginia this fall, we’ll see an early test of the new wave of primary challengers—there are at least three major challenges to sitting incumbents, including the powerful Senate minority leader, Dick Saslaw, a dutiful servant of Dominion Energy and its pipeline projects in the state. (My think tank, Data for Progress, is supporting these challenges through the Progressive Virginia Project.)

A powerful force in these primaries will be what might be called the “leftist-Resistance” alliance. Along with voters who might be disgruntled over a lack of oversight, Democrats who identity as “progressive” or “socialist” are particularly supportive of primary challenges for centrist incumbents, as the Data for Progress/YouGov Blue survey showed.

This incoming freshman class has made big demands, like a Green New Deal, and by further replacing centrist incumbents in safe blue districts, progressives can pull the party to the left. Progressives should ask why the movement has prioritized winning red-to-blue districts with left candidates. After all, with a Democratic majority of nearly three dozen seats, the marginal Democratic vote isn’t important. Far more important is having progressive voices that can lead in our districts. And these leaders, like Ocasio-Cortez, Tlaib, Pressley, Omar, and Haaland are overwhelmingly coming from safe Democratic districts. Investing there will deliver long-term benefits to the movement, and primaries can birth a new Democratic Party.