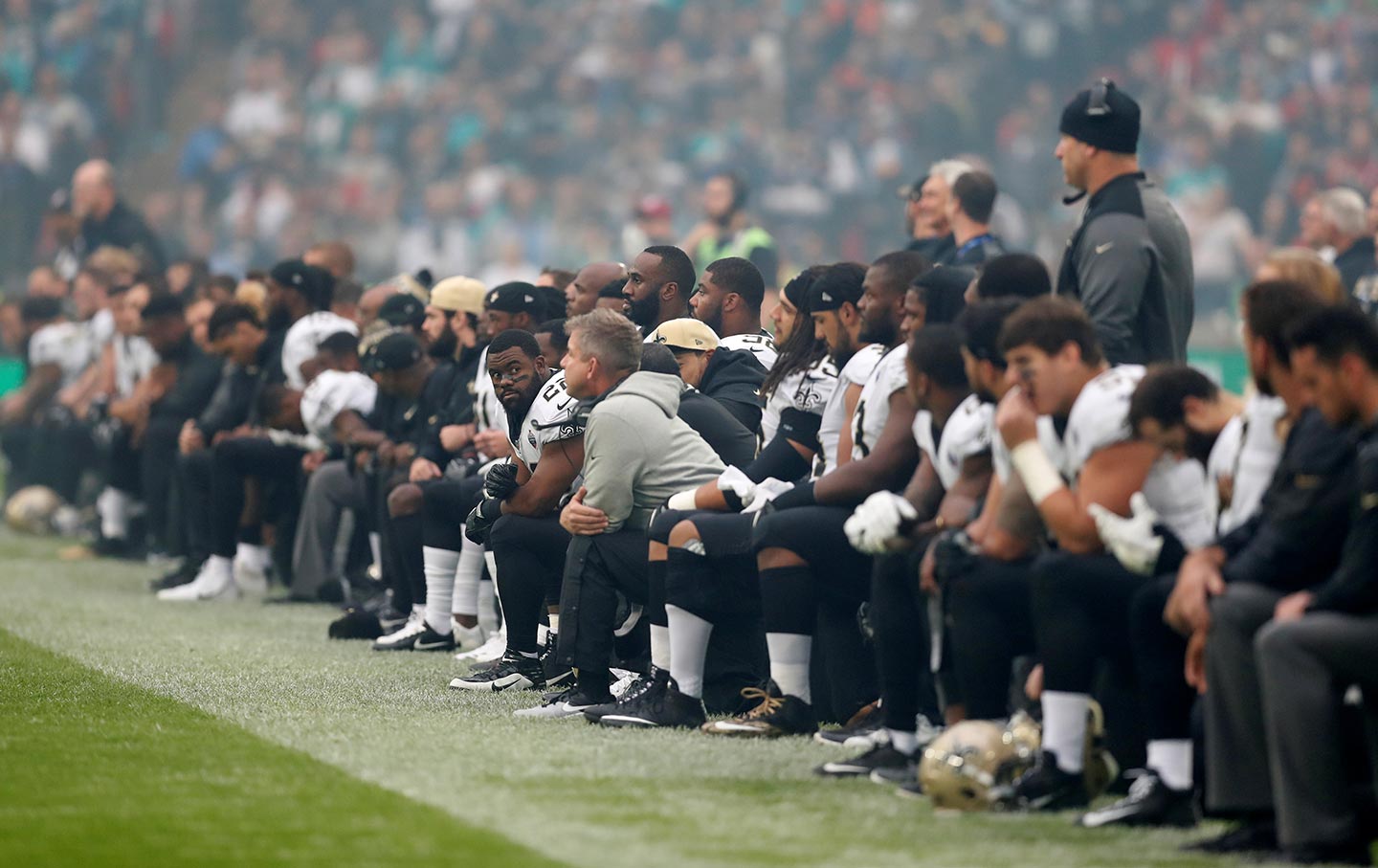 New Orleans Saints players take the knee before the start of the national anthem on October 1, 2017. (Action Images via Reuters / Matthew Childs)

For over a decade, I’ve written a column in December looking back at the year in sports and politics. From most of these annual assessments, the stories were comprised of nuggets overlooked by the mainstream sports media, things that generally did not make a blip outside a small circle of those interested in this intersection of sports and politics. The number of people interested that NBA bust Adam Morrison was a Ralph Nader supporter or whether an Egyptian soccer player was asking people to “sympathize with Gaza ”on the pitch, was not exactly large. Even athletes who made statements against war during the Bush years or spoke out for those left behind after Hurricane Katrina were not discussed with breathless analysis. They were an afterthought.

Then, over the last several years, the dream deferred of athletes’ being denied the ability to speak their minds exploded. Where this fuse was lit can be subject to debate, but I think the flame arose when the Miami Heat, led by stars Lebron James and Dwyane Wade, used social media and posed with their hoods on in 2012 to spread solidarity with the family of the murdered Trayvon Martin. Then, as black—and some white—athletes started to leverage their platforms to speak about those losing their lives at the hands of police, this wildfire intensified. Finally, in 2016, as Colin Kaepernick took a stand by taking that knee, the sports world firmly became a public square of political dissent.

Here’s what I wrote a year ago:

It is widely accepted that 2016 has been the most vile year in memory—a train wreck contained inside the world’s biggest dumpster fire. But amid the swirl of venom, political excrement, and personal tears, it is worth savoring the fact that, in the world of sports, tragedy has not been the defining characteristic. On the field, the sports world has been an oasis of uplifting escape. And off the field, allegedly apolitical players have charted a high-profile path of resistance that our normal political channels have failed miserably to articulate.

Now, in 2017, we have reached another place. The fight has spread beyond racial issues, as the #MeToo movement has become a part of the sports rhetoric of resistance. But this has also been the year of the backlash: open, ugly racism aimed at athletes who recognize that, in historical moments such as this one, they needed to do more than just shut up and play.

In comparing activist athletes from the past to the present, I’ve always found useful the line from Mark Twain that “History doesn’t repeat itself but it does rhyme.” This is a helpful framework in comparing the experiences of Muhammad Ali to Kaepernick or the trials of Jackie Robinson getting shunned in the Brooklyn Dodgers locker room to what LGBTQ athletes face today. It allows us to examine the fight for equal pay in tennis led 50 years ago by Billie Jean King and compare it to the efforts of Venus Williams. Their experiences and circumstances are extremely different, but there are common points of struggle, regardless of their era. In a word, rhyming.

But 2017 saw a different kind of rhyming. It saw the rhyming of the backlash. It saw how black athletes—and white supporters of those athletes—are, as in the past, threatened, policed, slandered, and attacked for daring to use their platforms to say something about the world. Donald Trump, Fox News, and their neo-Nazi-infused right-wing echo chamber has spent a year frothing with rabid barbarism in order to shut these athletes down. Whether it was Trump using vulgarity and cursing athletes who were protesting racism during the anthem and calling for them to be fired or his pulling of an unaccepted invitation to the Golden State Warriors or his bizarre feud with LaVar Ball, Trump has focused on black athletes as high-profile symbols of “people to hate,” and his echo chamber has followed suit.

Trump and his dwindling, aging army go after black athletes for the same reason they defended Confederate monuments and supported Roy Moore: because it’s in their blood. But their motivations are more obvious than just instinctual racism or playing to a base. Athletes have been the hub of anti-racist discussion over the last year. That threatens Trump’s “racial” agenda of division and suppression. It is also drawn from a very old playbook. Jack Johnson was derided in his day for refusing to be docile when becoming the first black heavyweight champion. Jackie Robinson, when he embraced the civil-rights movement, was attacked for not knowing his place as an athlete who had “made it.” Muhammad Ali was torn to pieces for daring to say,“My real enemy is here” and not in Vietnam. Tommie Smith and John Carlos were called “black skinned storm troopers” by Brent Musburger for raising their fists for human rights on the Olympic-medal stands. All were not only attacked by the press but by their governments who put the police and later the FBI on their tails, making sure that they paid a public price for daring to use their platforms for reasons other than patriotism or commerce. Yet they persevered, and decades later we laud them as heroes while their detractors are remembered as intolerant, vile bigots if they are remembered at all.

One lesson is that amid backlash, is that solidarity is essential and that, if we can remain strong, “courage is contagious.” As Breanna Stewart said, after she went public with her story of abuse and joined the #MeToo movement,

Hearing [Olympic Gymnast] McKayla Maroney’s story [of sexual abuse] and all the voices joining in #MeToo, dating back to [non-profit organizer] Tarana Burke, who really started it in 1997 and didn’t get a lot of credit for it [gave me confidence]. Even the momentum you feel around the NFL players organizing and forcing ownership to the table. Then there was my team, the Seattle Storm formally supporting Planned Parenthood. It’s inspiring to see other athletes using their voices. We are existing in what seems like a political pressure cooker right now, but I would like to believe that it’s worth being engaged because on the other side of all this, if we work hard enough, there is something better for everyone. I want to know that I stood up when it was hard, because that’s when it really counts.

This is the most important lesson out of 2017 for activist athletes from high school to the pros: the platform is there, and these struggles need to be linked in order to survive the backlashes to come. The fact that these actions are upsetting all the right people only proves the importance of the message. I don’t have the slightest idea what 2018 will bring: only that the blaze that these athlete activists maintained in 2017 will be felt for decades. It’s now a subterranean fire. They cannot put it out.