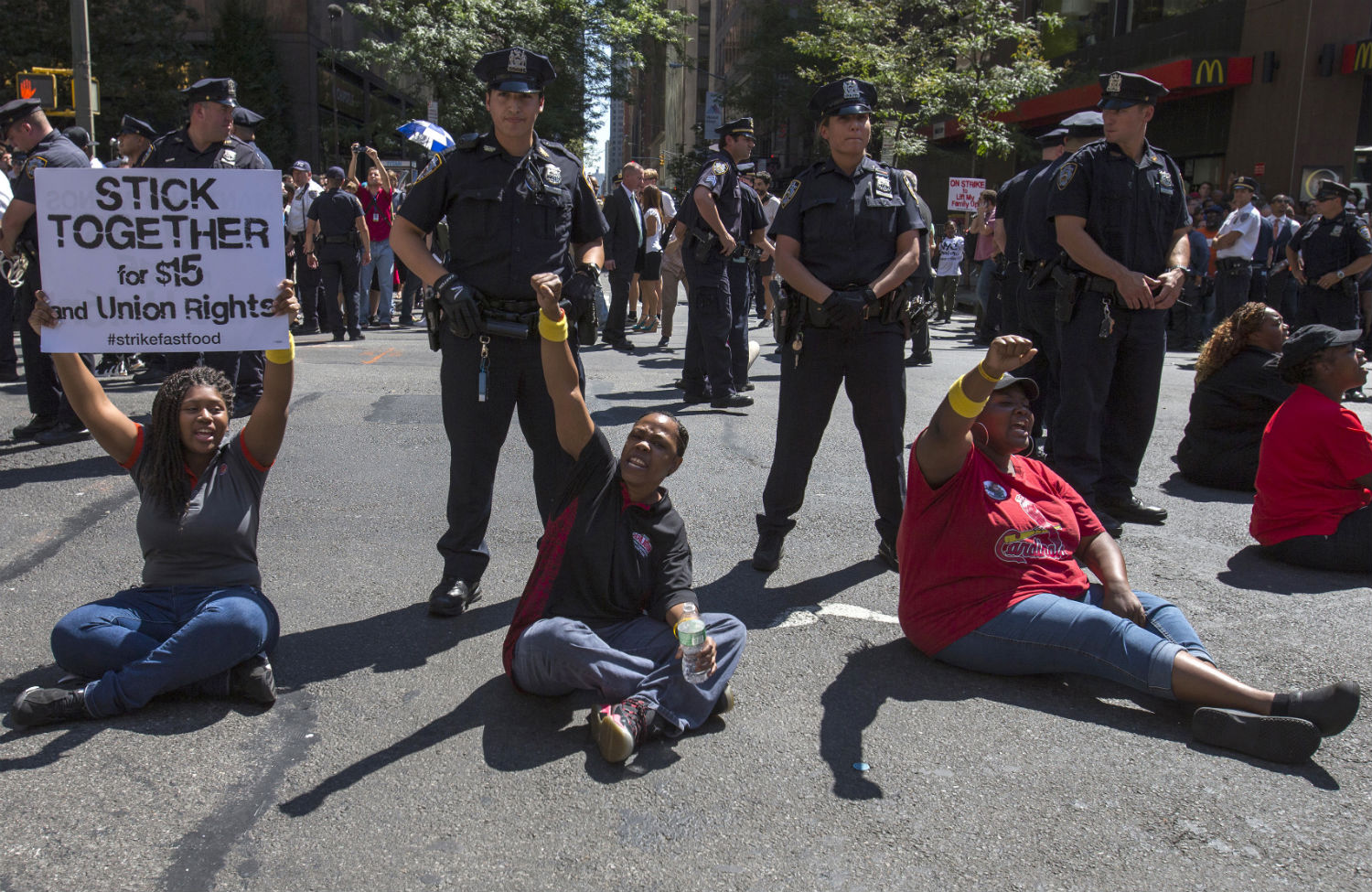 Activists stage a sit-in protest to demand a $15 dollar wage outside of a McDonald's in Manhattan, September 4, 2014. (Reuters/Adrees Latif)

As New Yorkers bustled along Eighth Avenue at lunchtime on Thursday, fast-food workers proudly marched off the job. And unlike most days, when workers quietly shuffle burgers over a fluorescent-lit counter, the protesters sat solemnly on the street under the glaring sun, waiting to be rounded up by police.

“What we’ve started and what we’ve become—it’s the same idea, but it’s branched out,” said Shantel Walker, who works as a shift manager at Papa John’s for $8.50 an hour. Standing with the crowd across the street from a McDonald’s, she said it was her sixth strike since joining the movement. “So [our] strength is growth.… We’re so proud of each other.”

Thursday’s protests hit about 150 sites, including Chicago, Detroit and other cities, reportedly leading to several hundred arrests. Unions and community activists joined the workers, holding up “#strikefastfood” signs and chanting “I believe that we can win.” Nearly two years since their mobilization began with about 200 workers in New York, the ruckus on Eighth Avenue indicated that fast food workers are following through on their pledge at their national convention in July, amplifying their two key demands: a $15 hourly wage and a union.

Now that the fast-food worker campaigns, backed by institutional support from SEIU, have evolved into a global phenomenon, with protests from São Paulo to Auckland, from Wendy’s to Starbucks to Sukiya beef bowl, no one knows exactly where the movement is headed next. But Thursday’s main message was that fast food workers’ plight represents the extreme inequality that plagues communities across the country.

Jeanina Jenkins, a McDonald’s worker from St. Louis, joined the New York protests in solidarity and declared: “We all need the same things: to put food on the table, a roof over our heads, and clothes on our backs.… The math doesn’t work on $8 an hour. So we’re here doing whatever it takes to win $15 an hour and union rights so the math does work.” Jenkins was one of several St. Louis area workers who chose to protest outside their hometown out of respect for the ongoing unrest in Ferguson.

As the campaign has exposed stories of extreme hardships besetting workers, who often earn less than $9 per hour—getting shorted on pay, relying on food stamps, living in homeless shelters—the protests have helped push the $15 wage demand to the center of economic policy debates.

Seattle passed a compromise bill for a $15 minimum wage earlier this summer. Similar initiatives are underway in San Francisco and Los Angeles. New York’s legislature is weighing a $13 state minimum wage, and New York City officials seeking to set their own wage floor of $15 per hour. According to NBC News, “13 states and 10 county and city governments have increased their minimum wages during 2013 and 2014.”

For unions like SEIU, which provides funding and organizing support for the protests in an effort to engage non-union workers, the movement has helped springboard other campaigns to raise wages through local policy initiatives and in other low-wage sectors.

The activists and workers at Thursday’s rallies were joined by SEIU home healthcare aides, representing another service industry wracked by poverty wages. Labor groups at other low-wage retailers like Walmart have also included the $15 wage demand in their campaigns for better working conditions. Some retailers have even gone the other direction, touting relatively high wages as part of their social branding.

Even Uncle Sam has gotten called out as a poverty-wage employer. Following strikes and protests by low-wage federal contract workers, President Obama in February signed an executive order raising the minimum wage for contract workers to $10.10 from $7.25—a rare bright spot in a Washington agenda that has fixated on tax cuts for the rich and welfare cuts for the poor.

Still, despite the protests’ symbolic political value, the fast-food sector itself has not seen specific material gains, like a sector-wide wage hike. This is in large part because the industry runs on decentralized franchise operations, which impedes centralized organizing. So the question remains as to what kinds of tangible gains these workers, or the union backing them, can expect from their organizing in the long term, without major restructuring of the industry.

But one achievement is that the movement has put the powerful restaurant industry lobby on the defensive. McDonald’s and restaurant business groups have dismissed the movement as a union-coordinated public-relations gimmick and warned that $15 wages (which comes to roughly $31,000 a year) would damage the industry.

The industry’s fear of a $15 wage reveals the potency of the demand: just high enough to seem idealistic, but still within political reach—and wholly reasonable, given the fact that at current wage levels in fast food, about half of the sector’s workers are getting by on public assistance.

The second demand of the fast food workers, getting a union, is an even trickier issue than raising wages due to the industry’s decentralized franchise ownership model. However, workers recently got a legal boost when they got approval to bring unfair labor practices charges against McDonald’s as a joint employer. This could open a new avenue for workers to challenge the company as their boss, thus moving toward recognition as a single national labor force.

Although the convoluted, bureaucratic process of forming a union remains a tremendous challenge in this precarious workforce, workers are generally becoming more organized and militant. Moreover, two years ago, $15 an hour for fast-food workers would have seemed like a utopian fantasy; the realm of possibility has broadened with each wave of strikes. That might be the biggest victory so far: the sense of confidence that workers have won as the movement has emerged at the foreground of a national discussion on inequality.

And for some, the energy of the movement could be subtly changing the atmosphere at work already. “We got respect now,” said Walker, describing what she sees as a changing attitude in how her workplace is run. Before the protests began, she recalled, “the disrespect was high, the pay was low. Now, there’s still something there, but they understand that I’m standing up for what I believe. And I’m making it known.”