EDITOR’S NOTE: Radhya Almutawakel is the 2020 recipient of the Anna Politkovskaya Award for women human rights defenders from war and conflict, which is presented by RAW in WAR (Reach All Women in War). This is her letter to Anna Politkovskaya, published on the day Almutawakel received an award named in Politkovskaya’s honor at “Refusing to be Silenced,” part of the Women of the World UK Festival 2021.

To receive an award bearing your name means a lot to me, not only because you stood up in the face of the Chechen war, armed with the virtue of pursuing the truth as a way to resist its atrocities, but also because, like you, my father was assassinated. He was assassinated in his homeland, Yemen, in November 2014 because he was a voice for peace among multiple parties which had decided to wage a fierce war. A war that began that year and has continued unabated. He was probably a stumbling block in the way of the war-makers and had to be removed, just as you were.

The war did not allow me space to mourn my father as he deserved. I did not even write a letter like this to him. However, I know that he is proud of every effort I make to confront this war and its crimes and violations against civilians.

Anna, I do not know what knowledge your memory may have held about Yemen. It was historically called Arabia Felix (Happy Arabia). However, today the United Nations calls it the worst humanitarian crisis in the world. Yemen is not suffering from a natural disaster but rather a man-made crisis. Now I feel as though this crisis has been going on forever, despite the fact that the war is little more than six years old and that, before these six years, we were a country that had lived as well as suffered. We were discussing a new Constitution and a new social compact, and we were calling for more freedoms as well as free and fair elections. Today, Yemen has become a country entirely controlled by armed groups and besieged by Arab countries, supported by Western countries. The very worst human rights violations are being committed against its people, one of which is starvation, used as a weapon of war. 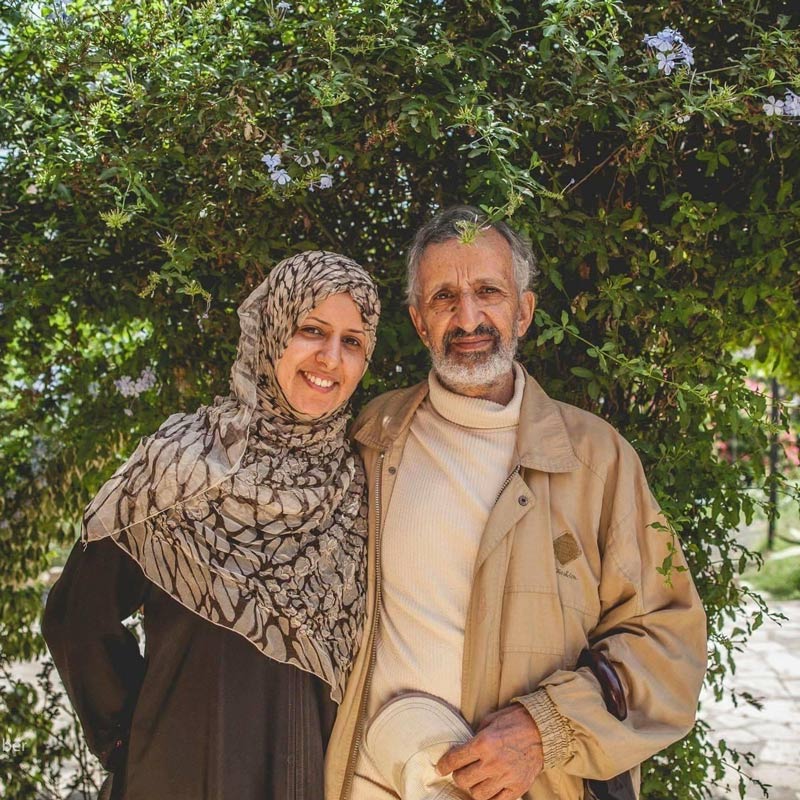 Radhya Almutawakel with her father, Mohammed Almutawakel, who was assassinated in Yemen. (Abdulrahman Jaber)

Nevertheless, none of this happened suddenly. The war had many beginnings but there were two catastrophic turning points. The first was in September 2014, when an armed group, called the Houthis, took control of the capital, Sana’a, besieging the government and expanding towards other governorates. The second was in March 2015, when a military intervention by several countries, led by Saudi Arabia and the UAE, took place at the request of the Yemeni government. I do not know how to explain to you how I felt at those times. I am a daughter of Sana’a, who adores the city and the civil spirit it has gained through the Yemeni people’s struggle over the years. On September 24, 2014, I was horrified when I went out on the street and saw an armed child standing in the place of the traffic controller, and that was only the beginning. At dawn on March 26, 2015, there were explosions all over Sana’a. The next day I stood in astonishment in front of the rubble of houses inhabited by eight families, where at least 27 civilians, including 15 children, had been killed in an air strike by the Arab coalition warplanes. That was also only the beginning.

Before I tell you more about the war, its violations, and its parties, let me, dear Anna, take you back a little bit, penetrating all this darkness with a little light.

I met Abdulrasheed Al-Faqih in the same year you died, my dear Anna. He is the person with whom I first shared a passion for human rights work and with whom I then began sharing my life. That year, the idea of Mwatana for Human Rights was born. It was still a dream in the imagination of two activists who had nothing but their belief in people and their right to a decent life. We started to lay the foundations of Mwatana in 2007. We were only two people. Today, we are a team of dozens of men and women whose work covers all of Yemen.

We, just like you, believe in the importance of truth in confronting war, so one of the most important things we do in Mwatana is documenting the violations of all parties to the conflict in Yemen. We consider information to be power, and that it is the first basis for any intervention which follows. After years of work, we consider ourselves responsible for building a human rights memory, not only for the purposes of advocacy and mitigating harm to civilians today, but also for future accountability.

Mwatana also works in the field of advocacy at the international level, to expose the violations of the warring parties in Yemen. I will tell you the truth, Anna, we thought at some point that telling the truth and publishing it would be sufficient to push for the protection of civilians and ending the war. However, we discovered that this is not enough, because there are countries that already know the truth of what is happening in Yemen. We realized over time that the Yemen war is not so much forgotten as it is ignored. Countries like the United States, Britain, and France can play an effective role in ending the war and protecting civilians, but they do not. Instead, they sell weapons to Saudi Arabia and the UAE, support them, and try to weaken any efforts towards accountability. On the other side, there is Iran, which supports the Houthis, and is no less bad but does not claim to adhere to democracy and human rights standards.

Through a team of men and women lawyers in different governorates, under different authorities, Mwatana also undertakes daily follow-up on cases of arbitrary detention, enforced disappearance, and torture. Our team has succeeded in contributing to the release of many detainees.

The Costs of 20 Years of War

Biden’s Pledge to Rein In Arms Deals Is Already Eroding

You must now be wondering how we can protect ourselves, and what are the risks to which we are exposed. In fact, no one is safe in Yemen—or, as I always say, we are all just safe by chance in this country, where anything could happen to anyone, anytime. There is no doubt that we face an increased risk, given that we are an independent organization working against violations committed by all the warring parties in a country that suffers from the complete collapse of the state, is controlled by armed groups, and is subjected to siege and a military campaign by several countries, one of which is its neighbor, Saudi Arabia.

In fact, we have no protection but our neutrality, professionalism, and our reputation, which has grown from the local level and has now reached the international level. However, none of us, of course, remains fully protected. A number of Mwatana’s team have been subjected to detention, harassment, and threats, including me and Abdulrasheed. Mwatana has also been subjected to intense smear and incitement-to-attack campaigns. The most important thing is that we are still able to play our human rights role toward the victims of war.

Shall I take you back to war? You know exactly what war means, and all wars must be the same. The most important thing you should know about the war in Yemen is that there are no heroes, only criminals and victims. None of the parties to the war are innocent of committing violations against civilians. They are all equal in their lack of respect for people, peace, and human rights.

Yemenis are exposed to direct violations from all parties, such as aerial and ground attacks, mines, obstruction of humanitarian aid access, child recruitment, attacks on schools and hospitals, sieges, arbitrary detention, enforced disappearances, torture, restrictions on various civilian spaces, and more. In addition to all the direct violations that affect civilians in Yemen, there is also the economic situation that has broken the backs of Yemenis. Most of the Yemenis in the public sector have not received their salaries since 2016; there is no electricity in most areas and there is a complete collapse of the state that leaves the Yemeni individual alone in the face of a tragedy bigger than them. The great misfortune is that, as I mentioned earlier, the parties to the war use starvation as a weapon of war.

I will not leave you with this gloomy picture, dear Anna, there is another truth that you should know, which is that Yemenis love life. Most ordinary Yemeni people still retain their inner beauty, helping each other through the difficulties of life. Many of them reject war and the violations of its parties, trying to make a positive impact in their own sphere. There are many women across Yemen who leave their imprint of beauty, love, and strength on the heart of this exhausted country, and raise their voices against the war. Despite all the complications, peace in Yemen remains very possible.

The efforts of everyone who wants to make a difference, for the benefit of the people, will not be wasted. Nor will your efforts be wasted, Anna. May your soul rest in peace.

The General Strike No One Is Talking About