Outside the El Helicoide prison in Venezuela, relatives of political prisoners call on Karim Khan, the prosecutor of the International Criminal Court to take action. (Yuri Cortez / AFP via Getty Images)

aracas—For the first 45 days of their imprisonment, three Venezuelan human rights defenders languished in a cold 13-by-13-foot cell. There was no natural light, fresh air, or communication with the outside world. Their only water source was the toilet pothole. Subject to what’s known as “white torture,” a method of psychological punishment the Nicolás Maduro government uses on political prisoners, they lost track of time and place. One of the prisoners, Rafael Tarazona, told me, “Psychologically, the hardest thing was not having information about our family, about our mom.”

Two of them—Rafael Tarazona and lawyer Omar de Dios García—were released after 116 days. But Rafael’s brother, Javier Tarazona, 40, remains in prison. Javier is the director of FundaRedes, a Venezuelan NGO that promotes human rights, citizen participation, and democratic norms. He has been fighting for human rights and denouncing the presence of armed groups in Venezuelan border areas for more than 20 years.

On July 2, 2021, agents of the Bolivarian National Intelligence Service (SEBIN) arrested Javier; Rafael, a cofounder and logistics coordinator of FundaRedes; and FundaRedes lawyer Omar de Dios García, when they showed up at the public prosecutor’s office in the Falcón state in northwestern Venezuela. Javier was there to lodge an official complaint against security officials and unidentified individuals for harassment. Instead of their launching an investigation into government intimidation, though, all three found themselves locked up in the infamous SEBIN headquarters, El Helicoide, in the center of Caracas.

On top of a rocky hill, with more than two miles of ramps that spiral into helices, El Helicoide breaks with the surrounding shantytowns. Constructed between 1956 and 1961, this futuristic building was supposed to become the largest and most state-of-the-art shopping mall in the Americas. Now, it’s known for dreadful conditions and the mistreatment that occurs inside, which, according to a UN report, are so brutal that they amount to crimes against humanity.

While Rafael and Dios García were freed in October 26, 2021, they live under conditional freedom, with a criminal proceeding still open against them. They have to present themselves in court once every 15 days (it had been once every eight days), and they are banned from leaving the country. Javier remains incarcerated under charges that he incited hatred, committed treason, and perpetrated acts of “terrorism.” He has yet to be convicted; he’s in pretrial detention, and his preliminary hearing has been deferred at least 13 times.

The Public Ministry charged him under the Law Against Hatred for Peaceful Coexistence and Tolerance, and the allegations stem from Javier’s request for a probe into former minister of the interior Ramón Rodríguez Chacín and his wife, Carola de Rodríguez, for their alleged links with the Colombian guerrilla group ELN.

Alfredo Romero, one of the Tarazona brothers’ lawyers, pointed out that Venezuelan authorities often use the Law Against Hatred to threaten anybody who dares to protest them. “I’ve seen so many cases of this,” he told me. “The judicial system in Venezuela is structured in such a way that it’s a weapon of political persecution, simply used as a facade.”

Human rights organizations see Javier’s case as emblematic of the systemic prosecution of citizens who dare to oppose the government: “All human rights defenders know that they can turn into ‘a Javier’ for the work they’re doing, particularly if they touch issues that are sensitive for the Venezuelan authorities,” said Alessandra Pinna, director of Latin America and the Caribbean programs at Freedom House.

Javier’s case is just one of many that led the UN Fact-finding Mission on Venezuela to conclude that the widespread attacks on the civilian population amount to crimes against humanity. The UN report, released on September 20, documents 122 cases of victims of torture or ill-treatment by Venezuelan General Directorate of Military Counterintelligence (DCGIM) agents, and 51 cases by the SEBIN since 2014. It reports that authorities suffocate detainees with plastic bags, rape them with wooden sticks, and apply electric shocks to their genitals. “The Mission has continued to investigate gross violations of human rights, including extrajudicial executions, enforced disappearances, arbitrary detention, torture and other cruel, inhuman or degrading treatment, including those involving sexual and gender-based violence, committed since 2014, with a view to combat impunity and ensure full accountability for perpetrators and justice for victims,” the report reads.

Such abuses are not limited to prisons. The second part of the UN report describes horrific violations in the Orinoco Mining Arc, an area in southern Venezuela, larger than Cuba, designated as a strategic development zone for the exploitation of gold and other precious minerals. “Today, we’re at a deadly chapter for the Mining Arc,” Américo de Grazia, former deputy member of the Venezuelan National Assembly for Bolívar State, told me. “The Mining Arc is killing our Indigenous people.”

The report describes both the Venezuelan security forces and armed criminal groups committing murders, kidnappings, torture, and sexual abuse. Miners, children, women, and Indigenous people are some of the key victims. The Fact-Finding Mission found information that suggests that authorities and criminal groups are working together. At the very least, the Venezuelan authorities often fail to investigate and punish crimes committed by such armed groups. 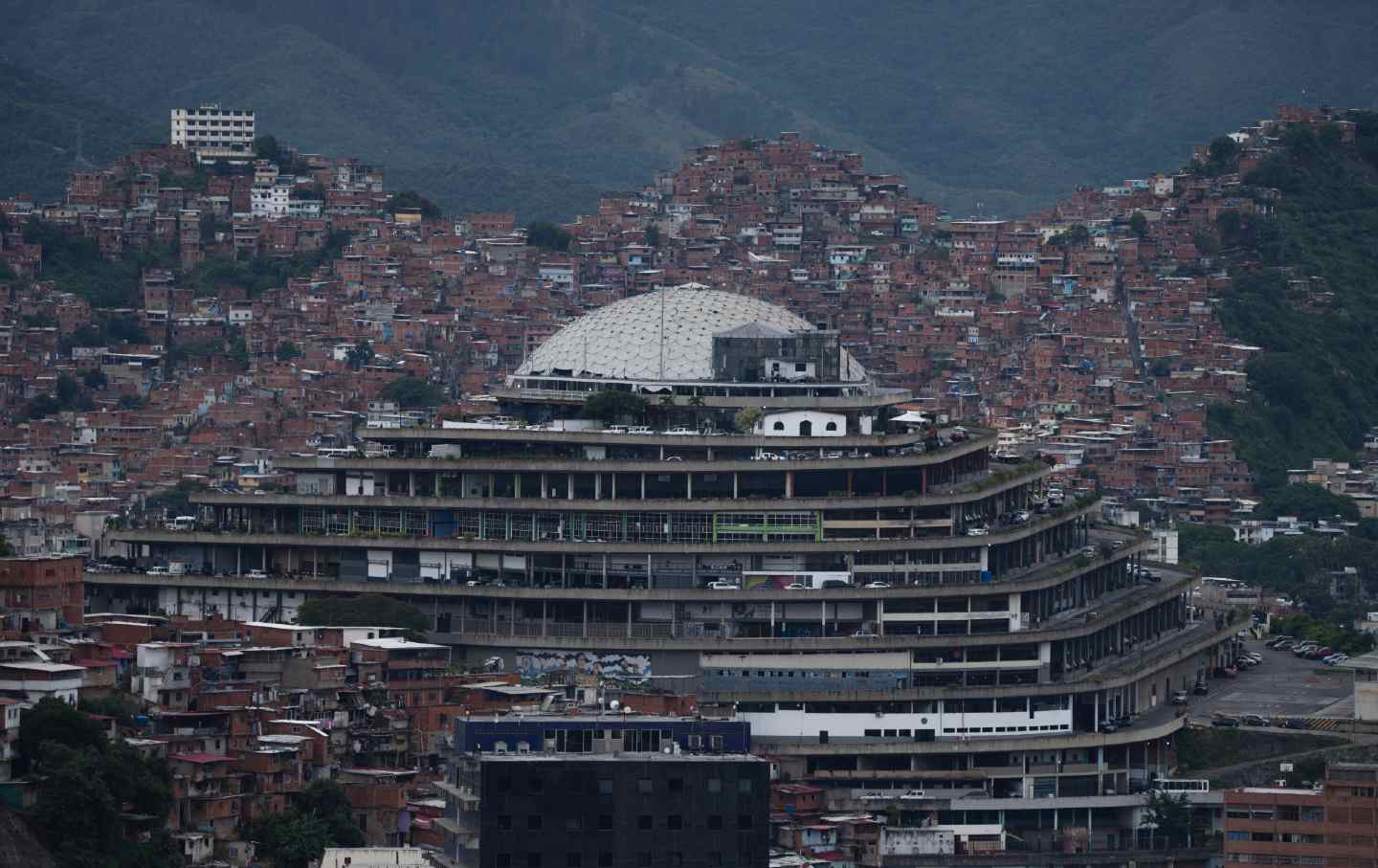 Following Hugo Chávez’s death in 2013, Maduro became president. And what started with the promise of a government for the people gradually turned into a dictatorship. The economy faltered and then collapsed. Venezuela is currently experiencing the steepest economic downturn in the world outside of war in nearly half a century. In 2021, according to the National Poll of Living Conditions, more than half the population lived in poverty.

In Venezuela, there are now multiple international investigations into government human rights abuses. There’s the UN Fact-Finding Mission looking into the roles and contributions of those at different levels in the chains of command, the representative of the Office of the High Commissioner for Human Rights (OHCHR) providing technical assistance and monitoring human rights, and a formal probe at the International Criminal Court. Romero joked that “Venezuela won the three medals of violating human rights.”

Marta Valiñas, the chair of the UN Fact-Finding Mission on Venezuela, told me that these investigations complement each other and that each is important for holding the government accountable. The International Criminal Court does not work in a public manner, and therefore “the Mission has an important role in publicly documenting and denouncing some of the critical issues that need to be addressed,” Valiñas said. The Fact-finding Mission feeds into the work of the International Criminal Court, but also into that of the OHCHR representative, who is on the ground and can assist authorities if they want to change their practices, she explained.

She told me she is especially concerned about the shrinking civic space in Venezuela. “We’ve found that the oppressive tactics and tools used by the government to silence opposing views have been quite effective,” Valiñas said.

In October, the Human Rights Council voted to extend the UN Fact-Finding Mission on Venezuela for two years—a result that human rights defenders applauded. “We’re entering a critical period of time, which is going to lead up to the presidential elections in 2024,” Valiñas said. The findings of the mission may help assess the likelihood of free and fair elections and if negotiations between the government and the opposition will be resumed in Mexico. “It’s important that these issues are addressed as part of those talks,” she told me.

While outside organizations are seeking justice, Rafael Tarazona, more than anything, wants to move on. “I don’t wish that [being imprisoned in El Helicoide] for anyone. Not even the ones who took us as prisoners,” he said.

Rafael said, “This has completely changed our lives.” He used to work as an engineer; now he’s the main caretaker of his older brother, shuttling back and forth to El Helicoide to bring him food, medicine, and clean clothes. “When I bring my brother’s clothes home, it has that strong smell. It takes me back every time,” he said, adding, “We’re not free until Javier is free.”