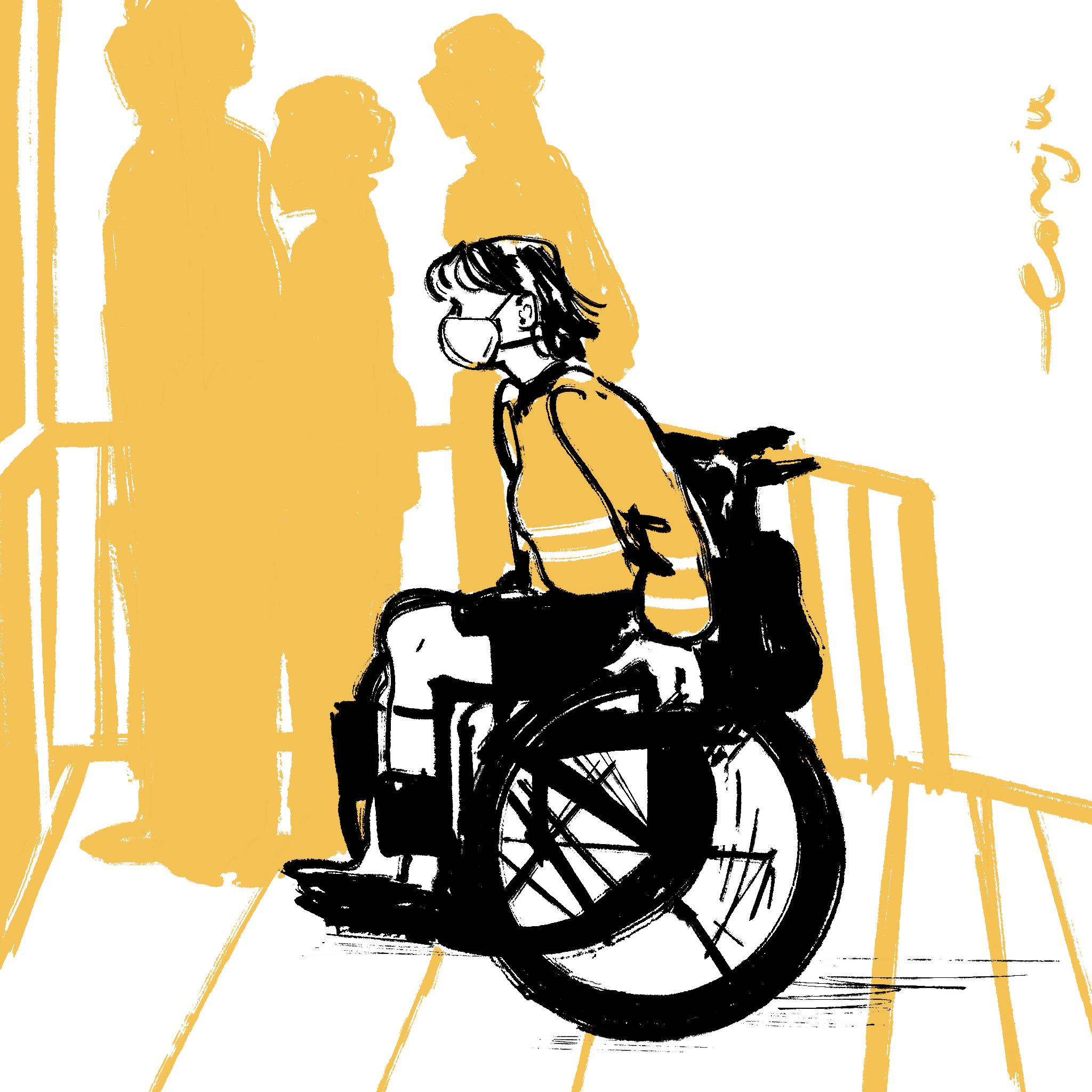 About the illustrator: eomju is a commercial artist and an occasional writer. She aims to produce vibrant illustrations that uplift human dignity. She has published Nightmare Collector with Achimdal Publishing House. You can see more of her work on Instagram. (eomju)

eoul—April 15 marked the 91st day of a dramatic confrontation at Hyehwa station in the middle of the South Korean capital. Disability rights activists, many of them in wheelchairs, have been staging subway protests to demand accommodations on public transit. And on this day the demonstrators chained themselves to each other and to a portable ladder, reenacting a 2001 protest where activists chained themselves to the subway tracks. Now they shouted, “Pass a budget for disabled citizens! No rights without a budget!” They boarded trains in groups, which requires transit workers to install and uninstall wheelchair ramps, thus causing delays. A few of the activists had recently shaved their heads in public, a monkish ritual of sacrifice.

Lee Hyoung-sook, who leads a local advocacy group, was among those with her head shaved. At Gyeongbokgung station, she tried to board the train en route to Hyehwa station. Subway workers brought out a ramp so her wheels wouldn’t get stuck in the large gap between the platform and the car. Four more wheelchair users waited their turn to board in other sections of the train. While workers moved their one ramp around to get every wheelchair activist on board, the subway doors kept closing in on them. “Fellow citizens, we sincerely apologize for the inconvenience,” Lee told her fellow passengers.

“We are waiting to hear back from President-elect Yoon Suk-yeol’s transition committee by April 20 on how they plan to ensure our basic human rights,” she explained. (April 20 is Korea’s National Day to Abolish Disability Discrimination.) “We hope to hear that the new government will do the bare minimum to safeguard our rights. But if we don’t, disabled citizens will resume boarding rush-hour trains again.”

The subway protests, led by Korea’s largest disability-rights group, Solidarity Against Disability Discrimination (SADD), began in early December, on World Disability Day. Their initial goal was to pressure the national and Seoul city governments to mandate accessible public transportation on subways, buses, and taxis. Taking advantage of the fierce campaigning in a close presidential race—the election would take place in early March—SADD secured meetings with the two major candidates, including Yoon, the conservative president-to-be.

On New Year’s Eve, lawmakers passed a bill on the right to transit. But it was not what SADD had proposed. While the law required city and rural buses to become wheelchair-accessible, it exempted intercity buses. It also let local governments opt out of taking additional steps, such as providing taxis for disabled citizens, on budgetary grounds. This was unacceptable to SADD and its allies.

The South Korean constitution guarantees that “all citizens shall be equal before the law,” but discrimination against people with disabilities—as well as racial minorities, foreigners, and queer people—is effectively legal. As calls for expanded antidiscrimination laws have grown over the past decade, so has a backlash from young men complaining of “reverse discrimination.” Yoon and his People’s Power Party (PPP) have made this grievance central to their politics. On March 26, Lee Jun-seok, Yoon’s right-hand man and the head of the PPP, condemned SADD’s rush-hour protests on his Facebook page. “SADD must immediately stop their illegal protests, which are indiscriminately holding Seoul commuters hostage at rush hour,” he wrote. “The underdog framing that minorities are always in the right no longer convinces the people. They are relying on a long-obsolete politics of gaslighting, stereotyping the majority as the evil and the minority as the untouchably holy.”

Lee’s remarks brought the disability-rights movement to the center of a larger fight for minority groups in South Korea.

In January 2001, a couple in their 70s, both in wheelchairs, arrived at Oido station, in a southwestern suburb outside of Seoul. They planned to visit their son for Lunar New Year, and, as there was no elevator, they had to use a vertical wheelchair lift. The device had been installed just six months earlier with the opening of the station. Yet, when the lift got them to the second floor, it suddenly broke apart. The metal links on which the lift was hanging detached, throwing the couple 23 feet to the ground. The mother died at the hospital nine hours later. The husband was severely injured but survived.

The accident was shocking, but the parties responsible—the Korean National Railroad and Oido station operators—immediately tried to minimize and cover up the damage. In the hours after the incident, they offered the family just 180 million Korean won (approximately $150,000) to settle the case. SADD was formed to demand a public apology and safe, accessible public transportation. Two weeks after the accident, activists occupied the train tracks at Seoul Station, a major transit hub. Wheelchair users were lowered down to the tracks, where they lay flat on their backs and chained themselves to the metal bars. Park Kyeong-seok, a codirector of SADD and cofounder of the NoDeul School for the Disabled, shouted, “We won’t stand for another death. Guarantee our right to mobility!”

Park and his allies went on to occupy subway cars and buses over the following months. The then-mayor of Seoul and future president Lee Myung-bak had no choice but to act. He pledged to install an elevator in every subway station by 2004. Today, more than 90 percent of stations have elevators—compared to only 30 percent of New York’s—but Park, his hair now silver, continues to fight for accommodation on buses and taxis as well. “The right to mobility is an especially crucial right. It’s inextricably connected to one’s right to education, health care, and labor,” Park said. According to a 2020 survey by the Korea Institute for Health and Social Affairs, 32 percent of disabled Koreans were not able to get to a hospital or clinic when they needed to—and 30 percent of this group cited transportation as the reason why.

South Korean Feminists Brace for a “Long, Hard Winter” Under a Right-Wing Leader

Park has been active in the latest round of subway protests, and now finds himself defending the disability community against hateful rhetoric. The rush-hour actions have led many non-disabled people to criticize SADD. I met Byun Hyun-jun, 21, a cofounder of Collective Action to Ensure Barrier-Free Accessibility at Seoul National University and a sociology student, at a protest at Hyehwa station. “I understand and empathize with inconvenienced citizens who experience a crucial 10-to-15-minute delay on their morning commute,” he told me. “But I wish we as a society could use a little bit of imagination to see that disabled citizens have been living with such difficulty over their entire lives.”

But PPP leader Lee has gone much further than complain about transit holdups. Disabled people, he said, were “playing the minority card” and using an “uncivilized, backward strategy to hold innocent citizens hostage.”

Comments on the online community FM Korea disparaging disability increased tenfold in the week following Lee’s remarks. And comments specifically targeting SADD increased threefold. Angry Koreans flooded SADD’s phone lines with complaints and offensive messages. Such hate speech against minority groups is part of a clear pattern resulting from a strategy by Lee, President-elect Yoon, and the PPP to demonize various minority groups in order to consolidate the support of right-wing voters. 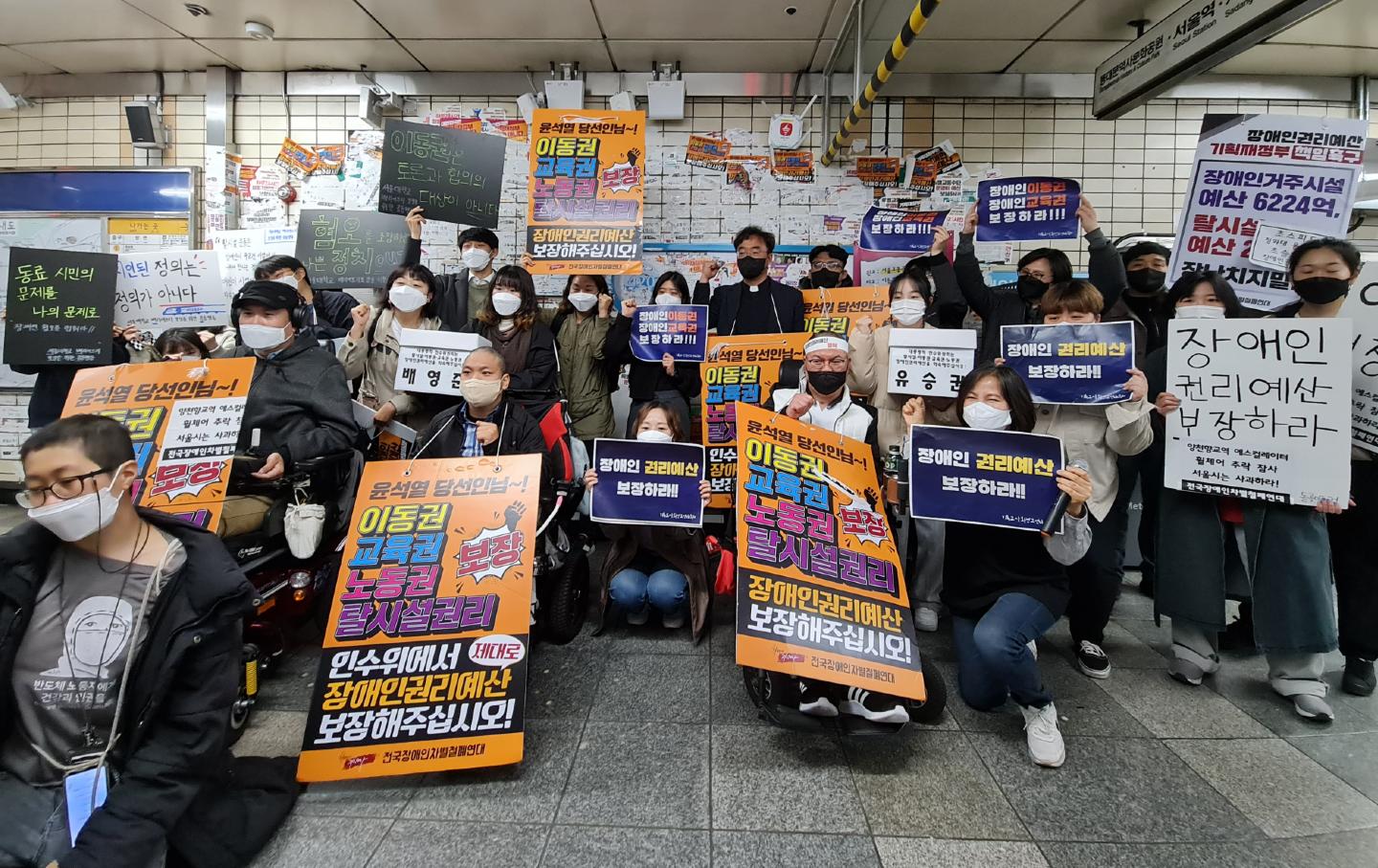 The personal stakes of accessible transit are profound and well documented. For Kim Heon-yong, a blind English teacher at Shinmyeon Middle School in Seoul, the realization came on a commute to work in 2013. He missed his stop and got off at a random station to circle back. “I was unfamiliar with the station’s layout, and that station hadn’t yet installed safety doors along the platform,” Kim recalled. He accidentally stepped off the platform and fell onto the tracks.

“When I realized what had happened, the first thought I had was, ‘It finally happened to me, too,’” he said. “I’d frankly been expecting to have this happen at some point in my life. I knew how common this kind of accident is for blind citizens using the subway.” In fact, four of 15 people in Kim’s cohort from a school for the blind had fallen onto the tracks. “I was narrowly saved by women who pulled me up by my arms before the train arrived, but a friend was hit by the train at Yongsan station in 2013 and now lives with paraplegia.”

Korean subway stations have become much safer, but as recently as 2018 a wheelchair user was killed in a lift accident at Seoul’s Balsan station. “Seoul may have a high percentage of subway accessibility today, but that hasn’t stopped preventable deaths and injuries in stations that have yet to install elevators,” Park, the longtime activist, explained. Outside Seoul and a few other major cities, people are more likely to rely on buses and taxis as public transportation, posing serious obstacles for disabled users.

Three weeks ago, organizers with SADD agreed to temporarily halt rush-hour demonstrations at the request of the presidential transition committee, which had promised to answer the activists’ call for a specific disability plan by April 20. A day earlier than promised, the transition committee released a statement vowing to improve accessibility across the nation. But its statement lacked any mention of budget allocations, which would be required to enact any changes. As a result, starting April 21, SADD plans to resume rush-hour demonstrations—this time across three subway lines, which will likely disrupt commutes across Seoul.

“All we’re asking for from the incoming government are improvements across the subway, bus, and taxi systems so that we can navigate our cities, just like able-bodied citizens,” said Lee Hyoung-sook, an activist with NoDeul Independence Center. “Our society’s immediate response to any problem of disability rights has been to segregate and quarantine disabled citizens. But we are here. We exist even when we may be pushed out of sight.”