Security forces walk past burnt and damaged shops, which were on fire during anti-Muslim riots. (Sanchit Khanna / Hindustan Times via Getty Images)

New Delhi—Mehtab Khan, a 28-year-old manual laborer, left home to buy milk on February 25. By the time he returned, a right-wing Hindu mob had gathered outside his street. As he tried to pass through, the crowd grabbed him, beat him to death, and set his body on fire.

Three days later, I met his brother, Mohammad Rashid, 41, outside the mortuary of the Guru Tegh Bahadur hospital in Delhi. Rashid was waiting for Mehtab’s remains. Rashid told me, “There was a video of him that went viral. Someone showed us the video, and we went to the nursing home. His charred body was lying on the floor in the corridor.” He showed me a screengrab on his phone—it was Mehtab’s partially blackened corpse.

The murder of Mehtab wasn’t the only one during Trump’s visit. Across Delhi, at least 52 people, mostly Muslims, died in four days of riots and more than 350 people were injured. During that time, mobs burned down at least four mosques, two schools, 287 houses, 327 shops, and 415 vehicles. The Delhi Chamber of Commerce said the violence caused nearly $4 billion in damage.

While walking back from the mortuary, I met Tabassum, as she headed to a nearby police station to request the body of her 35-year-old brother, Musharraf. When rioters filled her street, she, her brother, and his family took refuge in a Hindu neighbor’s house. “We stayed for two days with the Hindu family.… When the mob arrived, my brother hid under the bed, but they sprinkled kerosene in the room and said, ‘We will burn the house if you don’t bring the men out.’ They dragged him from under the bed and beat him. He was then set on fire and thrown into a nearby sewage drain,” Tabassum told me. 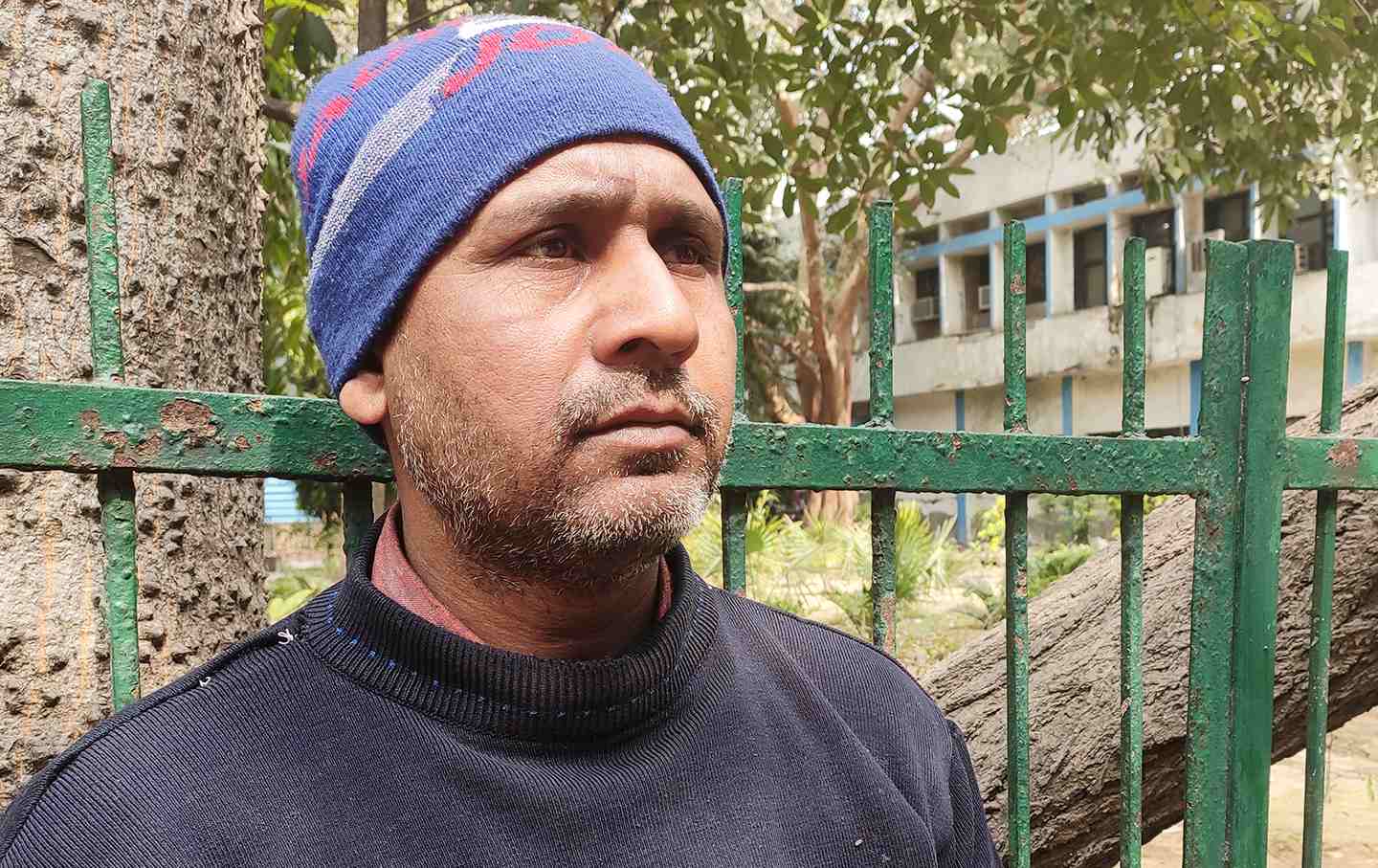 The police asked her and her brother’s widow to visit the police station to fill in some documents before receiving the body. “We won’t go back now. We escaped this time, but for how long can we be safe? Our neighbors are telling us not to come back. It is dangerous,” she said.

The government is not innocent in these attacks. The anti-Muslim ideology of the RSS is driving both the decisions of the ruling Bharatiya Janata Party and the pogroms. Prime Minister Narendra Modi, who came to power in 2014, joined the RSS when he was just 8 years old. Founded in 1925 by Keshav Baliram Hedgewar, the RSS was heavily influenced by German and Italian fascism, and maintains that India should be a nation of Hindus. Hedgewar himself said, “if Hindusthan [India] is to be protected, we should first nourish the Hindu culture.… Mere geographical lumps do not make a nation…. It is therefore the duty of every Hindu to do his best to consolidate the Hindu society.”

Today, the RSS has 60,000 branches and more than half a million members. In the past 10 years, the organization has doubled in size, and the Bharatiya Janata Party is essentially the political arm of the RSS. In 2019, Modi passed the Citizenship Amendment Act (CAA), which provides citizenship to refugees of every faith—except Islam—from Afghanistan, Bangladesh, or Pakistan. Coupled with the National Register of Citizens (NRC), which is forcing Indians to prove their citizenship, the laws could make tens of millions of Muslims deportable. In Assam state alone, the government informed 1.6 million people, or 6 percent of the population, that they would be considered illegal aliens. The BJP now wants to implement the NRC across the country, with at least 10 detention centers under construction to hold Muslims who can’t prove their citizenship.

The protests against these laws is what attracted the Hindu supremacists to Mehtab’s street. A few yards from his home, outside the Farooquia Mosque, crowds had been protesting the CAA and NRC for 45 consecutive days. Demonstrators graffitied nearby walls with “No NRC, No CAA.”

Since the BJP came in power, hate crimes against Muslims have increased. From 2009 to 2019, police recorded 287 hate crimes, with more than 90 percent of them occurring in the last five years. The amount of hate speech by politicians has also spiked; one study showed a 500 percent rise from 2014 to 2018.

On February 28, after the noon prayers at the now damaged Farooquia Mosque, I met Aas Mohammad Shafi, 49, a local contractor. He said he saw the attack and told me, “After shooting at people, the mob, supported by the police, broke into the mosque and dragged our two clerics out. They were beaten up brutally, and the mosque set on fire.”

Shafi added, “We had CCTV [cameras] installed here, and [the rioters] must have seen it, so they broke all the cameras and its main control room the next morning.”

The rioters set on fire another nearby mosque. Afterward, soot covered the walls, and a cupboard, once filled with copies of the Quran, contained only ashes. On social media, a video showed a man climbing to the minaret of a third mosque in order to fly the saffron flag used by right-wing Hindu groups.

The terror didn’t stop after those attacks, Rashid told me. “I have videos of what they did the following night. My mother was crying that night, and they were screaming that there are people hiding in your house,” said Rashid, sobbing. He showed me a video on his phone of a group of men carrying swords and batons and destroying surveillance cameras.

In the same neighborhood, rioters set fire to the Arun Modern Public School. When I visited, the shells of burned-out vehicles were parked in the courtyard, and scorched books and benches sat in heaps in the classrooms. Before trying to destroy the school, people stole cash, laptops, and other equipment from inside. Qasim Zaidi, a faculty member of the school, told me, “They were rioters, and they don’t have a religion or identification. Locals gave us photos, and we saw them wearing helmets or covering their faces. We can’t identify anyone.”

For Indian journalists, it can be a dangerous story to report. Hindu mobs have forced male journalists to drop their pants, so they could check to see if they were circumcised, and therefore likely to be Muslim. Female journalists have been asked for their names and harassed. 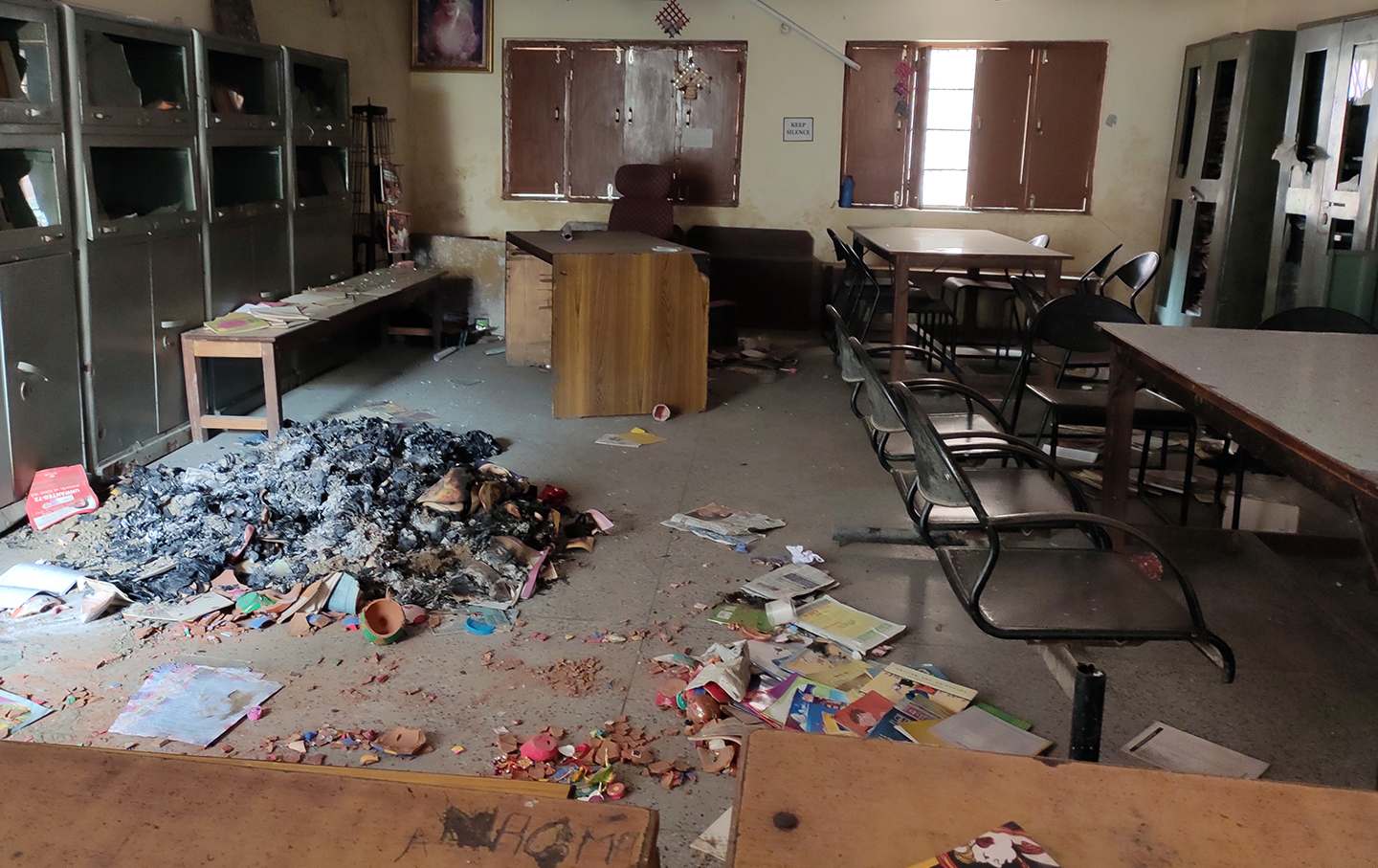 In its assessment, the Delhi Minorities Commission concluded that the violence was “one-sided, well-planned.” The commission chairman Zafarul-Islam Khan said, “We have said that the violence was one-sided as that’s what we felt from what people told us. They said that it was not possible for outsiders to pinpoint shops and houses owned by Muslims. So there had to be insiders who were helping the outsiders.”

Many residents, including Shafi, told me they called 100, the police help line, but no help arrived. Multiple eyewitnesses told me that police officers were part of the mob on the first night of violence, and then in the following days, they stood by and did nothing as the violence unfolded. Multiple videos also appeared to show police and mobs throwing rocks at Muslims together.

At a local private hospital, where paramedics cleaned the wounds of the injured, a doctor told me police prevented ambulances from reaching them. On February 26, a local court had to order law enforcement to allow ambulances safe passage. Even with the ambulance being blocked, his hospital, which has only 15 beds, received hundreds of injured patients. It was clear to everyone whose side the police were on.

Walking around Delhi, I saw terrified faces of Muslims, and it’s no wonder: At any time, a mob could persecute, hunt, and lynch you. As a Kashmiri, the sight of stones on the streets, burnt buildings, funerals, and injured people is sadly familiar. We’ve witnessed it for decades in Kashmir, which is transitioning from its own violent clampdown. (In August 2019, the Modi government revoked Kashmir’s semiautonomous status and cut off Internet access for more than six months.) But to many in Delhi, this level of violence is shocking. “We never thought this would happen, ever,” Rashid told me. “The government has done this, and it is spreading violence for the next 50 years. Muslims are traumatized and terrorized. We are frightened. People are beaten up just because of a Muslim name.”