Guatemalan journalist Jose Ruben Zamora, president of the newspaper elPeriódico, looks out from inside a vehicle after being arrested in Guatemala City, on July 29, 2022. (Johan Ordonez / AFP via Getty Images)

Renowned Guatemalan journalist José Rubén Zamora, president and founder of the investigative newspaper elPeriódico, has been detained for nearly a month. Security forces stormed Zamora’s home in Guatemala City on the afternoon of July 29, and occupied it for hours as several police cars and other vehicles without license plates surrounded the property. The law enforcement agents who entered Zamora’s home were heavily armed and had their faces covered, according to elPeriódico. The newspaper’s offices were also raided that same afternoon.

Zamora’s arrest is just one of many instances of the Guatemalan government persecuting journalists in response to their work exposing corruption.

“We had staff detained for 16 hours…practically kidnapped by the police,” said Juan Diego Godoy, a columnist and the digital director at elPeriódico, who was not in the office at the time. Despite the raid, elPeriódico successfully published the print edition of its July 30 paper under the headline “No Nos Callarán,” or “They Won’t Silence Us.”

Zamora was arrested on charges of alleged money laundering, blackmail, and influence peddling. But his case is part of a brutal pattern of worsening repression against the press by the conservative government of President Alejandro Giammattei, who’s been repeatedly accused of corruption not only by elPeriódico but also many other independent news outlets. Zamora was apprehended just five days after elPeriódico published the first part of a satirical report critical of Giammattei.

“Since I started as a journalist in 1989, I’ve denounced that we live in a narco-klepto-dictatorship that has us kidnapped and cowered,” Zamora said as he was being escorted by security forces to the tribunal building after his arrest. A couple of days later, the Guatemalan government temporarily froze elPeriódico’s bank accounts. Last week, police raided the home of elPeriódico’s director of finance, Flora Silva. She’s currently hospitalized and facing detention, Godoy said. This isn’t the first time the government has targeted elPeriódico or Zamora in retaliation for their work.

Two weeks ago, a judge ordered Zamora to remain jailed at the troubled military prison Mariscal Zavala while Guatemala’s prosecutor’s office gathered evidence. El Faro reported that prosecutors took a mere 72 hours to build the foundation of a porous case against Zamora ahead of his arrest in late July. His next hearing is not scheduled until December, when a judge will determine whether Zamora should go to trial.

Journalist Gerson Ortiz, the news editor at elPeriódico, who’s worked at the paper for 11 years, said elPeriódico has received threats over its investigations into criminal activity and corruption across multiple administrations. Ortiz has memories of helicopters flying over the paper’s offices. Godoy said many elPeriódico journalists have faced constant harassment and that at least a handful of his colleagues are currently in exile. Since President Giammattei took office in 2020, there have been some 350 reports of attacks against the press, according to the Guatemalan Press Association. 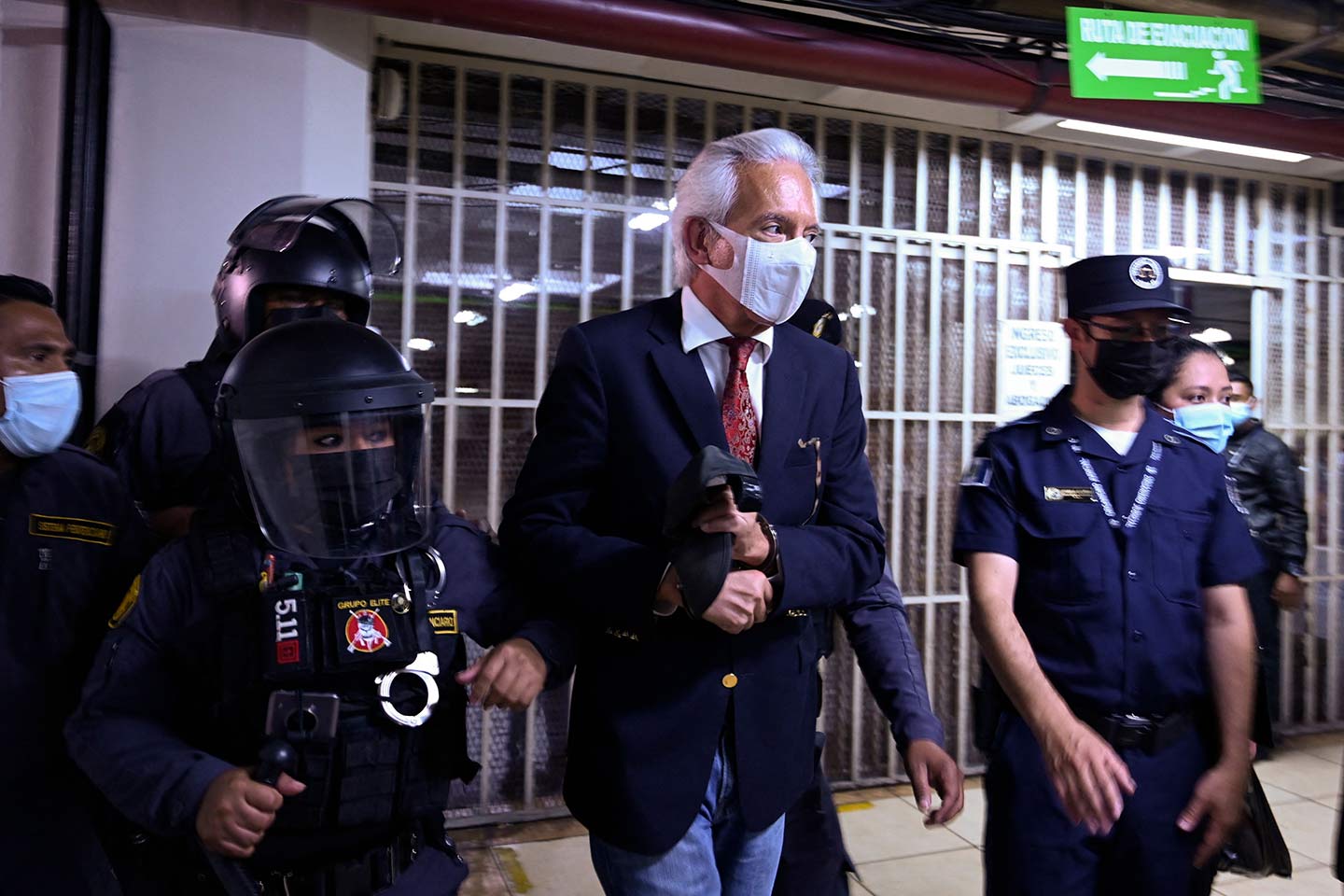 “We are now suffering the consequences of telling the truth,” said Godoy, who’s also a member of elPeriódico’s editorial board. “The same people have governed Guatemala for years and they’ve kidnapped every single institution. This corrupt system changes presidential faces but its model remains intact.”

Threats against the press have not only intensified in Guatemala but across Central America.

As esteemed Salvadoran journalist Óscar Martínez wrote earlier this month in The Washington Post, “From this part of the world, northern Central America, there is no doubt where we journalists are standing right now: on a floor of fine glass.” Martínez and his colleagues at El Faro have faced ongoing threats and surveillance from the government of Salvadoran President Nayib Bukele. In the Washington Post op-ed, he writes, “The governments of Nicaragua, Guatemala, El Salvador and Honduras are becoming less squeamish about presenting themselves in public for what they are: enemies of the independent press. We are the target.”

In Guatemala, elPeriódico has published dozens of investigations of corruption involving President Giammattei and numerous members of his cabinet, including Attorney General Consuelo Porras and Rafael Curruchiche, who last year was appointed head of the Special Prosecutor’s Office Against Impunity (FECI) after the previous anti-corruption prosecutor, Juan Francisco Sandoval, was abruptly fired and forced to flee the country. Curruchiche is overseeing the criminal investigation into Zamora and has claimed that Zamora’s detention doesn’t have “anything to do with his work as a journalist” but is due to “his position as a businessman.” Police have also detained assistant prosecutor Samari Gómez, who was a member of FECI under the leadership of Sandoval, in connection with the probe against Zamora.

“This is a sign that any dissident voice, any critical voice will be silenced, anyone who sheds light into the rot of corruption, and that includes judges, prosecutors, journalists, and newspapers,” Ortiz said.

While many are warning that Guatemala is rapidly sinking back into authoritarianism, the reality is that this repression never left. It’s always been present in Guatemala—even after the signing of the so-called peace agreements in 1996, which were supposed to end nearly four decades of brutal conflict between the US-backed right-wing military regimes and a dissent led by Indigenous and rural communities, student activists, unions, and social justice movements.

“This has historical and structural legacies. We are not regressing into anything. These are the same conditions laid out by political transitions that never allowed for real change,” said María de los Ángeles Aguilar, a Maya K’iche’ historian, postdoctoral scholar at Yale University, and columnist at elPeriódico. “We went from a time of war and dictatorship to a democratic transition, but we have to reflect on who exactly was sitting at these negotiating tables and brokered this supposed democracy.”

In 2015, there was a breath of hope in Guatemala when giant protests took over the streets for months, forcing the resignation of former President Otto Pérez Molina and Vice President Roxana Baldetti over a corruption scandal. The criminal investigations and charges against Molina and Baldetti were among hundreds of other government corruption cases brought forward by the United Nations–backed International Commission Against Impunity in Guatemala, known as CICIG. In 2019, the government dismantled the commission. 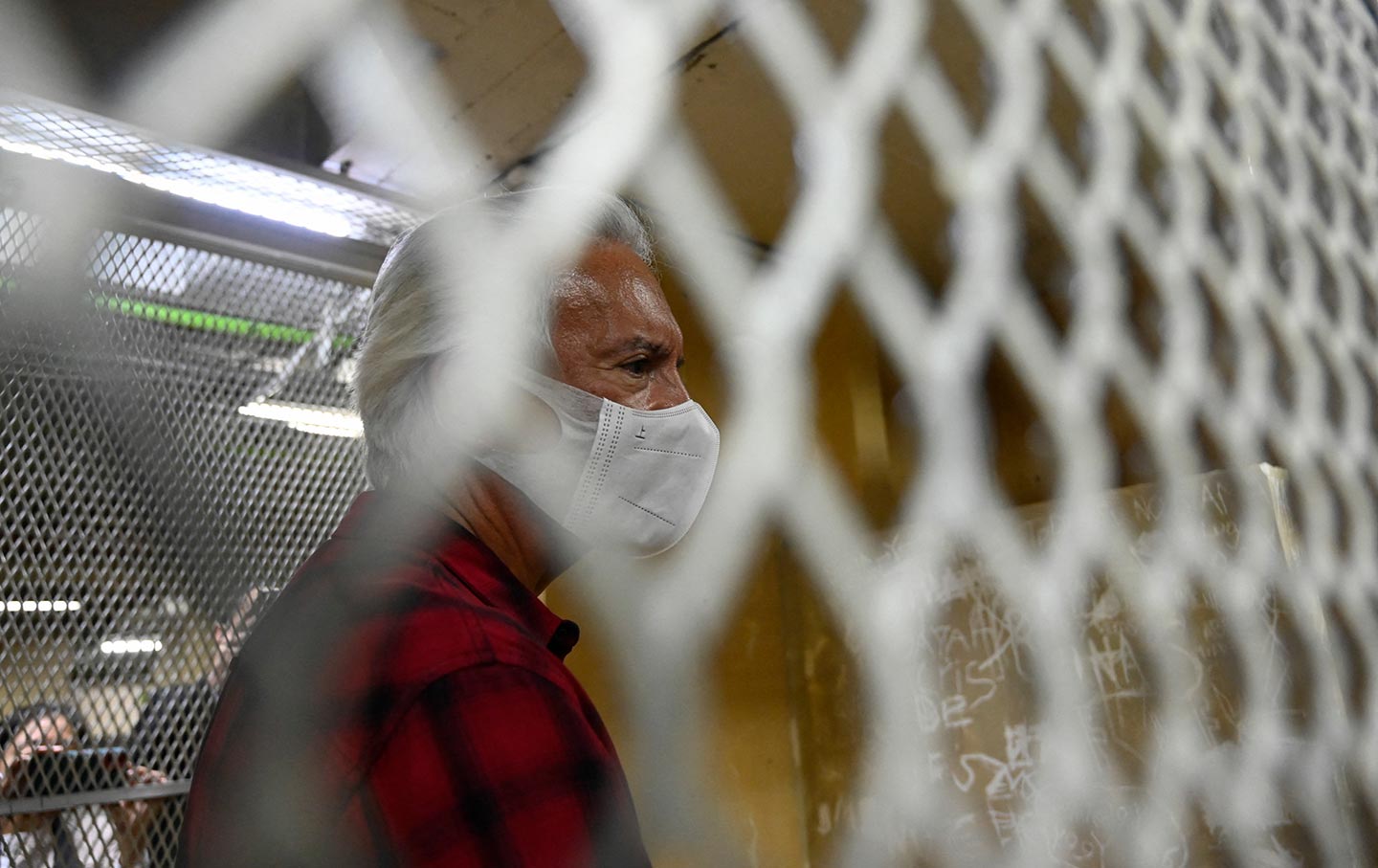 Guatemalan journalist Jose Ruben Zamora, president of the newspaper elPeriódico, speaks with journalists after a hearing at the Justice Palace in Guatemala City, on July 30, 2022. (Johan Ordonez / AFP via Getty Images)

“And it is after the departure of CICIG that there’s a very clear setback,” Ortiz said. “These powerful groups once again begin to close ranks and shield themselves from extensive investigations into criminal networks that dedicate themselves to defrauding the state and stealing tax money from the people.”

To Quimy de León, journalist and founder of the alternative, community-led news outlets Ruda and Prensa Comunitaria, this wave of repression against journalists, human rights defenders, and others in Guatemala began long before CICIG was shut down by the Jimmy Morales administration. Since at least 2012, de León and Prensa Comunitaria have monitored dozens of cases of violence, judicial persecution, and political imprisonment of Indigenous community journalists reporting on corruption at a municipal level.

“This began to manifest in Indigenous territories. Community journalists have for the past 10 years been experiencing the difficulties others are just now paying attention to. Documenting the corruption of a mayor was enough to be the target of aggressions, intimidation, beatings, arbitrary detentions, and even murders,” de León said. “It wasn’t newsworthy because of the racism in Guatemala. At times our compañeros were not even recognized as legitimate journalists.”

Corrupt local governments partnered with multinational corporations have fueled decades of repression in rural and Indigenous communities. They have flooded communities with mines, African palm plantations, and other investment projects that exploit the people and land, displace local families, and pollute the environment. Community journalists and local resistance movements exposing these truths have faced militarization, killings, and imprisonment.

After Zamora’s arrest, some prominent Guatemalan voices have called for the United States to once again intervene in issues of corruption and repression in Guatemala. As Aguilar argued, these demands often erase the fact that decades of US and foreign policy in Guatemala have contributed to the government corruption that threatens the livelihood of journalists and local communities.

Yes, the now-abolished CICIG received most of its funding from the United States, but the Biden administration continues to support private economic investments in Guatemala even though its own State Department accuses several Guatemalan government officials of corruption. The Biden administration also relies on Giammattei’s government to violently block asylum seekers in their trek to the US-Mexico border.

Across Central America, the United States has historically backed repressive, corrupt governments as long as it’s politically convenient. This includes the brutal regime of former Honduran president Juan Orlando Hernández, whose political party was put in power after a US-backed coup in 2009, creating a “state model that benefited national and multinational elites, through paramilitarism and narcotrafficking,” de León said. Hundreds were killed under Hernández—from LGBTQ and women’s rights defenders to journalists to Indigenous leaders like Berta Cáceres. Just weeks after his term ended, Hernández was arrested on cocaine trafficking charges and has since been extradited to the United States.

“They have helped, financed, trained, and collaborated with these elite military powers who now have coopted the system [in Guatemala],” Aguilar said. “But [these powers] no longer need the US to survive because they have other allies, among them organized crime, narcotraffickers. US foreign policy is designed to benefit the interests of the United States, not Guatemala or Central America.”

The outcome of José Rubén Zamora’s case is uncertain. If a judge in December determines that there’s enough evidence to go to trial, he could remain behind bars for months while the process unfolds. For now, Ortiz urges vigilance on the conditions faced by Zamora while jailed at Mariscal Zavala, where many of the people he investigated and criticized are also imprisoned. “Prisons [in Guatemala] are not safe for anyone,” Ortiz said, “especially for a journalist.”