Congressional representatives from political party Morena climbed the rostrum to commemorate the seventh anniversary of the disappearance of 43 students from the Escuela Normal Rural of Ayotzinapa, showing photos of the students. The man speaking, Congressman Manuel Vázquez, survived the attack in which the students were disappeared. September 28, 2021. (Diego Simón Sánchez / AFBV / Agencia EL UNIVERSAL / GDA via AP Images)

After 43 students from the Ayotzinapa Rural Teachers’ College disappeared in Guerrero, Mexico, in 2014, the federal government claimed that the local police had kidnapped and brought the young activists to the Cocula garbage dump where they were killed and their bodies incinerated in a bonfire. According to the government, their remains were placed in garbage bags and dropped in a nearby river. The Enrique Peña Nieto administration announced this version of the events in January 2015 and said it was based on detainee and forensic evidence. Jesus Murillo Karam, the attorney general at the time, called it “the historical truth.”1

For seven years, many of the parents of these students have refused to believe this “historical truth,” and have demanded that the authorities continue to search for their sons. The Interdisciplinary Group of Independent Experts, known as the GIEI, has kept the investigation alive, focusing its efforts on answering why police attacked the buses filled with students on the night of September 26, 2014, and what happened to the those young activists once they were abducted.2

Through an agreement between the Mexican government and the Inter-American Commission on Human Rights (IACHR), the GIEI was authorized to delve into the case again. Following numerous visits to the Cocula Garbage Dump, the GIEI proved that the federal government’s claims about the fire, in which the students’ corpses were allegedly reduced to ashes, were not scientifically possible. According to José Torero, a fire scientist, the amount of gas and tires that the detainees said they used to burn the students would not have been sufficient to cremate the bodies. The nearby foliage also did not show signs of a massive fire.3

The GIEI released new findings on March 28, and confirmed that the Mexican Marines staged the alleged crime scene, that police tortured detainees, and that the Army had embedded an undercover soldier with the students the night of their disappearance.4

During the release of their report, the GIEI projected a video recorded from a drone in which three Marine trucks are parked in the vicinity of the garbage dump on October 2, 2014. Three white bags are visible. Marines light a bonfire, and within 10 minutes, the bags are gone. More trucks arrive on the scene, including ones transporting Attorney General Karam and Tomas Zeron, the head of the Criminal Investigation Agency, the Mexican equivalent of the FBI. The video also shows three helicopters hovering above the dump, and one comes so close to the ground that dust and trash blows in the air, clearly contaminating the alleged crime scene. A few hours later, Karam declared that they found human remains that could belong to the students.5

Following the release of the GIEI report, the families of the 43 students held a press conference in which they reiterated their belief that all three levels of the government were involved in the disappearance of their sons. “They always called us stubborn for refusing to accept the ‘historical truth,’ but now we see that they did not just lie but also manipulated the evidence so that we would never find out what happened to our sons,” Hilda Hernández, mother of disappeared student Cesar González Hernández, told me. “Why, why did they do this? Who are they defending? Why don’t they want to find out the truth?”6

In December 2014, the remains of Alexander Mora Venancio were identified from the ashes and bones found in garbage bags that were supposedly extracted from the San Juan River in Cocula. While the government claimed this proved that the students were burned and murdered in the garbage dump, the independent experts as well as independent forensic scientists said there was no evidence that these human remains had come from there. The families wondered if Venancio’s remains had been in one of the bags in the GIEI video that the Marines planted at the scene.7 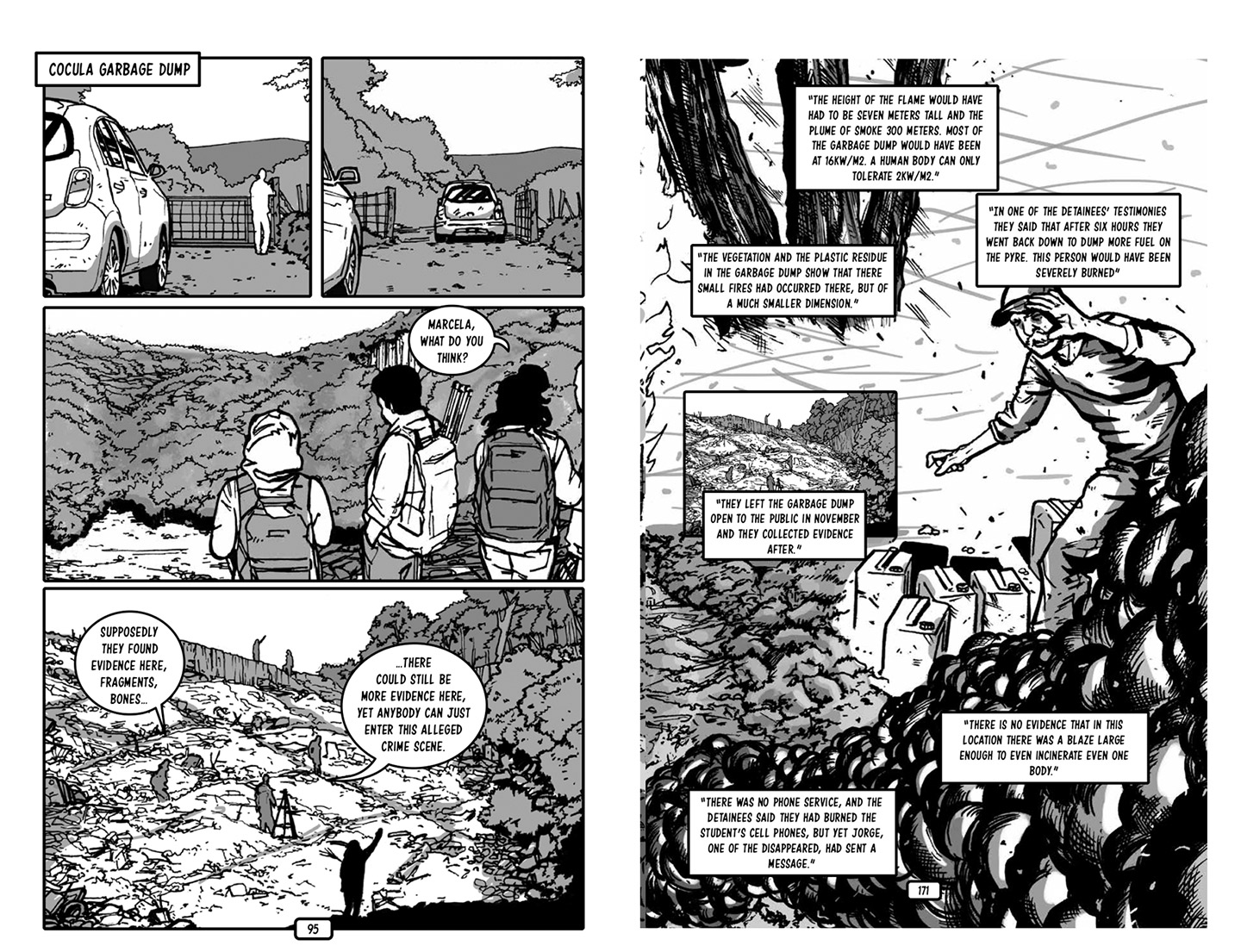 Manipulating crime scenes and failing to protect evidence has been a constant in the Ayotzinapa case. On October 28, 2014, Zeron visited the river with two of the detainees who were allegedly tortured. This visit was never incorporated into the investigation files, and the GIEI experts believe that he was orchestrating the “historical truth” with these two detainees.9

Along with a group of journalists, I visited the Cocula garbage dump on November 11, 2014, a week after Karam announced his version of events. There were no government agents present, and any member of the public could freely enter the area.10

As I interviewed town residents close to the dump about whether they had seen anything suspicious on the night of September 26, two unmarked SUVs with tinted windows pulled up and the men inside aggressively questioned us. Numerous other journalists had similar experiences of intimidation by state forces while documenting this area. On November 15, 2014, the attorney general’s forensic experts returned to the dump and collected more ballistic evidence—even though the site had been open to the public.11

The GIEI investigation also revealed that two Mexican soldiers operated undercover at the Ayotzinapa school. The Army called this an act of counterinsurgency due to the long tradition of socialist politics in the teachers’ college. One of these soldiers was with the students the day they were kidnapped. GIEI expert Butraigo told me, “The fact that the Army infiltrated the Ayotzinapa school with soldiers signifies that they knew every single movement they were making including during the moment of the attacks and during their disappearance,” When asked why this information was revealed after so many years, Buitrago added, “In the previous administration, neither the secretary of defense, General Salvador Cienfuegos, nor other senior level government officials would allow the information to be released.”12

When Andres Manuel Lopez Obrador became president in 2018, he promised to complete the case and immediately met with the parents of the students. He brought back the independent experts, created a special prosecutor’s office to investigate, and demanded that the Army share all relevant information.13

Over 170 people have been detained since 2014 in connection with the disappearance of the students, but more than half have been released for lack of evidence or because authorities tortured them to obtain confessions. No one has been found guilty, and dozens remain in custody seven years after their arrests. The new GIEI report also revealed that 20 people connected to the case have been murdered. One suspect believed to have crucial information was murdered in 2021 by federal authorities during a police chase. The special Ayotzinapa unit of the federal prosecutor’s office has requested 110 arrest warrants, but authorities have yet to detain 40 people that this unit believes are linked to the students’ disappearances.15

Lopez Obrador’s government has ordered an arrest warrant for Zeron, accusing him of enforced disappearances and torture, but before he could be detained, he fled to Canada and then to Israel. The Israeli government has so far not complied with Mexico’s extradition requests.16

When the GIEI published its report, it barely made a ripple in Mexican media, and social media was obsessing over Will Smith’s Oscar slap. But the forensic experts and families are optimistic that the report will push the government to keep investigating and reveal what really happened to the 43 missing students. “I can’t believe that seven years have gone by, and they still don’t know what happened to our sons,” Hilda Hernandez told me. “This report gives us hope that they will now pursue new investigative angles.”17

Putin’s Support Among the Far Right is Splintering