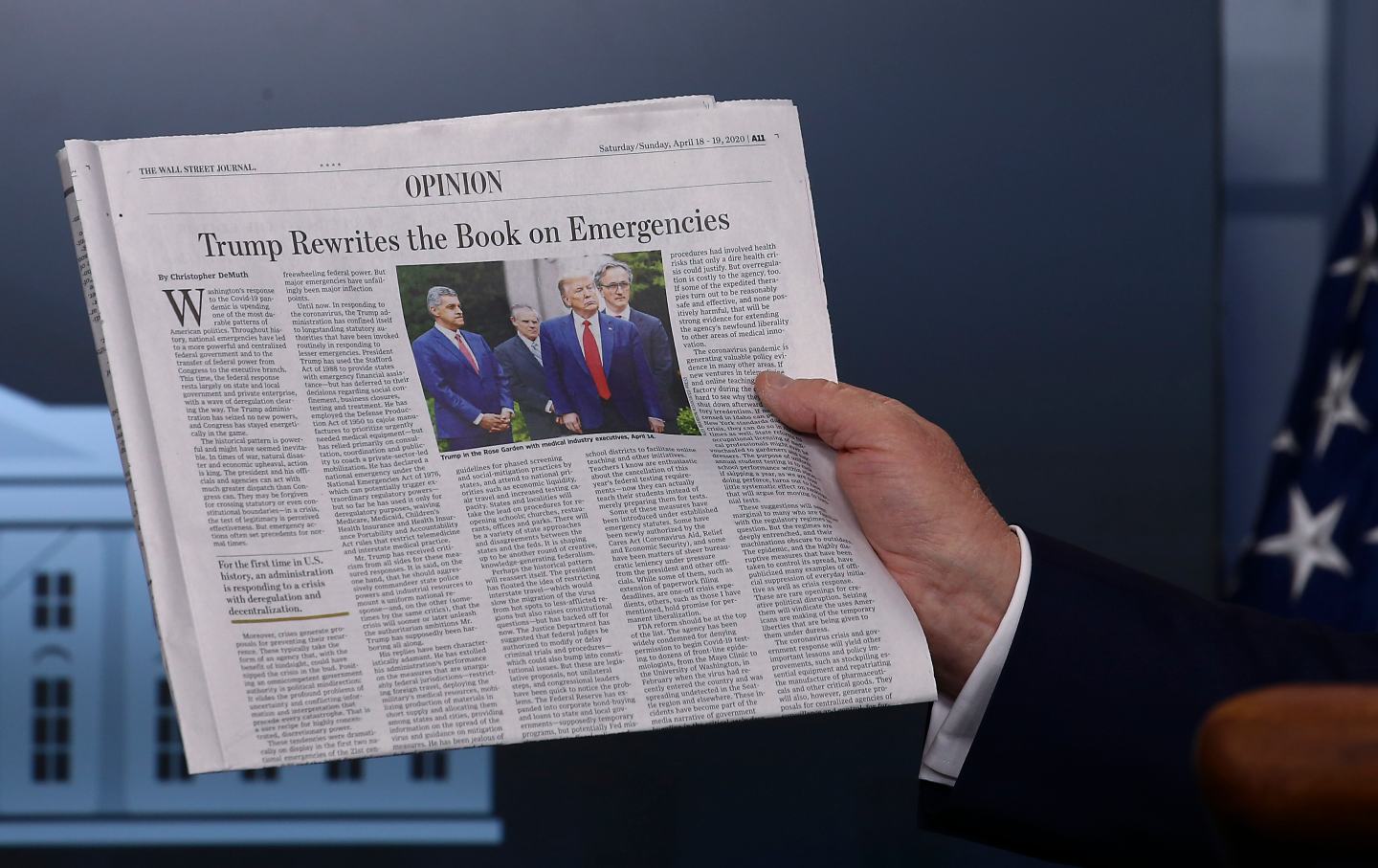 Donald Trump holds up The Wall Street Journal as he speaks at the daily coronavirus briefing at the White House on April 19, 2020. (Tasos Katopodis / Getty Images)

In 1981, Ben Bagdikian, a veteran journalist and former dean of the University of California, Berkeley, journalism school, tried to explain why The Wall Street Journal published an opinion section dominated by an almost lunatic fringe. “Executives and stockholders really do want to know the unpleasant truth about corporate life when it affects their careers or incomes. At the same time, however, most of them are true believers in the rhetoric of free enterprise,” he noted. Therefore, by “singing the grand old hymns of unfettered laissez-faire on the editorial pages” while reporting the truth in its news pages, “the Journal has it both ways.”

This was only moderately problematic when US politics was played on a field with center-left and center-right goalposts, though media critics often amused themselves by suggesting that any number of inaccuracies published on the opinion pages could have been easily avoided if their authors took the trouble to read their own newspaper. Unfortunately, the Journal‘s editorial page helped mess up the game when Republican politicians started taking its arguments seriously. It began with the paper’s campaign for supply-side economics under President Ronald Reagan and ballooned with literally thousands of pages of conspiracy theories printed during Bill Clinton’s presidency. Incrementally, thanks to the massive investments of billionaires like Rupert Murdoch (now the Journal‘s owner), Richard Mellon Scaife, the Koch brothers, and the Mercer family, this sort of nuttiness became holy writ within the conservative punditocracy.

Under the stewardship of Paul Gigot, who took over the Journal‘s op-ed section in 2001, the page has lurched rightward with the rest of the conservative movement—to the point that even fabulists like Bret Stephens and Bari Weiss no longer felt comfortable and decamped to pollute the pages of The New York Times. Unlike the Times, however, the Journal‘s page, with just one centrist exception, often publishes only right-wingers. Opinions may split between those who cheerlead for and those who chide the president. But there is a discernible consistency: a commitment to owning the libs.

Today the threat posed by the Trump administration spreading coronavirus misinformation and violently repressing Black Lives Matter protests has made publishing the president’s most enthusiastic supporters especially dangerous. As the Times‘ Senator Tom Cotton brouhaha demonstrated, journalists have pushed the issue of printing fascistic arguments on one’s op-ed page front and center. Despite the legacy of live and let live across the news and opinion partition, the Journal‘s actual journalists took action in July. About 280 signed a long letter to the paper’s publisher, Almar Latour, complaining that the opinion section’s “lack of fact-checking and transparency, and its apparent disregard for evidence, undermine our readers’ trust and our ability to gain credibility with sources.” The letter had many examples, but a centerpiece was a column titled “There Isn’t a Coronavirus ‘Second Wave'” by Vice President Mike Pence, whose arguments were inconsistent with the government’s own figures when published and were thoroughly debunked by the Journal‘s news pages days later.

Latour issued an anodyne statement in response, saying, “[We] remain deeply committed to fact-based and clearly labeled reporting and opinion writing. We cherish the unique contributions of our Pulitzer Prize–winning Opinion section to the Journal and to societal debate in the U.S. and beyond.” The editorial board, sounding a lot like Weiss upon her departure from the Times, complained that it would not kowtow to what it called the “wave of progressive cancel culture” and argued that unlike those fraidy-cats at The New York Times (or so it implied), “our opinion pages offer an alternative to the uniform progressive views that dominate nearly all of today’s media.”

Herein lies the dilemma that faces all serious mainstream media organizations: Take the Trump administration at its word, and you are not only disgracing yourself professionally by misinforming people; you are also putting your readers’ lives at risk. But if you don’t do so, you are vulnerable to the incessant and aggressive working of the refs by right-wing figures who label any attempts to impose standards of truth telling as “progressive cancel culture.”

For a few years after Murdoch’s purchase of the paper from the Bancroft family in 2007, the Journal‘s jewel-like news-gathering operations appeared at risk. The mogul’s handpicked editor in chief, the British-born Gerard Baker, complained in 2017 of “a fit of Trump-induced pearl-clutching among the journalistic elite” and sought to steer the paper’s reporting in a pro-Trump direction. That fear was mitigated when Baker was replaced by the veteran journalist Matt Murray in 2018 and relegated first to the news pages and, after his May 15 column “The Often Distorted Reality of Hate Crime in America,” to the opinion pages. An earlier letter to Latour from staff members argued that the column not only posited “the highly controversial argument that black people commit more hate crimes than white people” but also used “only his own single weighted statistical calculation, with no attribution or context” to support it.

I do not exaggerate when I say that the result of believing the Journal‘s editorials can be death. Pence’s op-ed, for instance, used false statistics to encourage complacency in places experiencing spikes in coronavirus infections. At least three academic studies have pointed to an increased number of Covid-19 cases where viewership of Fox News, Murdoch’s other famous property, is unusually high. A direct causal relationship is difficult to establish, as the same people who are likely to be lied to by right-wing pundits might have refused to take proper precautions anyway. But it is enough to say that misinformation about the virus is a serious public health risk, and we should cheer on the journalists rising up within their institutions to insist that they are no longer willing to be a party to it.