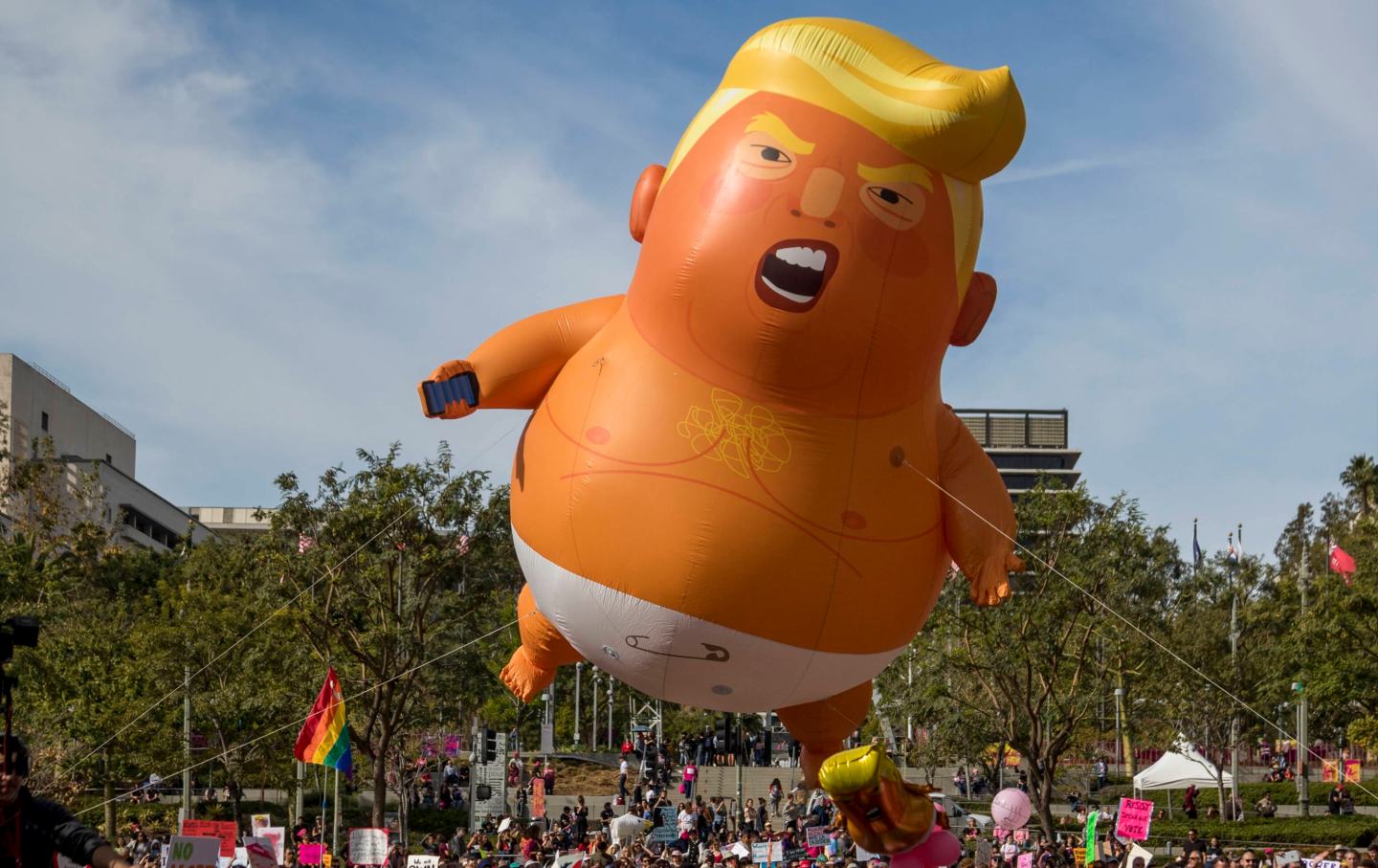 The catastrophe that is the Donald Trump presidency exceeds human imagination. It wreaks destruction in so many directions simultaneously that any attempt at even a reasonably comprehensive account strains both patience and credulity (to say nothing of column lengths).

Hence the need for metaphor. And yet, here again, nothing really works. This inadequacy of language itself is a crucial factor in our inability to recognize the scope of the danger that Trump and his movement represent.

Philip Roth has been earning prophecy points of late. He describes a scenario somewhat similar to a Trump presidency in his 2004 novel, The Plot Against America, now an HBO miniseries. In its pages, he imagines an American strain of fascism, which he locates in a fictional Charles Lindbergh presidency. Having defeated Franklin Roosevelt in the 1940 election, Lindbergh seeks to ally the United States with Nazi Germany abroad and inspires anti-Semitic riots at home. (As it happens, Roth’s last novel before his death in 2018, 2010’s Nemesis, focuses on the polio pandemic of the 1940s. Like Albert Camus’s The Plague, it portrays the myriad human frailties and quiet acts of heroism that outbreaks of disease reveal and inspire.) Despite his prescient fiction, the writer who coined the term “indigenous American berserk” (in 1997’s American Pastoral), by his own admission, no match for the reality of a Trump presidency. In a series of e-mails published by The New Yorker in 2017, Roth wrote, “It is easier to comprehend the election of an imaginary President like Charles Lindbergh than an actual President like Donald Trump…. It isn’t Trump as a character, a human type—the real-estate type, the callow and callous killer capitalist—that outstrips the imagination. It is Trump as President of the United States.”

Impressively, at a symposium at Stanford University way back in 1960, Roth anticipated this phenomenon as well, calling “the American reality…a kind of embarrassment to one’s own meager imagination. The actuality is continually outdoing our talents, and the culture tosses up figures almost daily that are the envy of any novelist.”

Trump is constantly proving Roth right. Searching for an apt metaphor, I liked the implicit comparison, by The Washington Post’s Alexandra Petri, of Trump to a goldfish, lost in a “pastless, futureless, contextless void.” Daniel Drezner, writing in the same pages, fixes on the term “toddler,” collecting about 1,300 examples of when “a Trump staffer, subordinate or ally—in other words, someone with a rooting interest in the success of Trump’s presidency—nonetheless described him the way most of us might describe a petulant 2-year-old.” But even these fail to do justice to Trump’s compulsive malevolence—his need to destroy what he cannot bend to his will. What’s more, a focus on Trump himself does not explain how this miscreant became president of the United States or how he retains the fealty of roughly 40 percent of its populace, a significant portion of the media, and one of its two major political parties. Searching my (admittedly failing) memory of American culture, the best I can do, metaphorically speaking, is a Twilight Zone episode and one of my least favorite Martin Scorsese movies.

As far as I can tell, the first person to compare our political reality to the 1961 Twilight Zone episode “It’s a Good Life”—based on a 1953 short story by Jerome Bixby—was New York Times columnist Paul Krugman in April 2017. It tells the story of a 6-year-old boy born with the power to destroy anyone who fails to meet his every wish. The child’s entire town lives in fear of failing to anticipate his irrational and obviously immature demands or meet his constant need for praise. But what is missing from these comparisons is Trump’s deliberate cruelty; goldfish, toddlers, and 6-year-olds are not purposely evil.

To capture that aspect of Trump, I think of Scorsese’s 2002 opus, Gangs of New York, which depicts the slums and politics of 19th century Manhattan. In 1839, New York’s former mayor Philip Hone observed, “This city is infested by gangs of hardened wretches” who “patrol the streets making night hideous and insulting all who are not strong enough to defend themselves.” The thing is, among these gangs of hardened wretches was the one belonging to William “Boss” Tweed and his Tammany Hall ring. Enjoying the power of the state—or at least the city—they could torture and murder with impunity. Now, Scorsese has never been known for historical verisimilitude. Violence is his forte, and in this case, I think, its excessiveness ruins the movie. The film’s bloodshed does, however, provide a metaphor for Trump’s presidency: a metropole ruled by thugs demanding the same deference that men in their position have traditionally been granted and then deploying their offices to pillage for their own pleasure.

All of the above is pitched at a rather abstract level, but anyone who has paid even the slightest attention to Trump since he was first warned about the potential consequences of the coronavirus has witnessed the evidence. To describe him accurately requires the kind of language that journalists do not generally allow themselves. As the constitutional law professor Laurence Tribe tweeted on March 26, “Trump is ensuring the avoidable death of countless New Yorkers…. His moral culpability is that of a murderer even though the law doesn’t call him one.” Instead we get Trump’s meanderings, lies, and conspiracy theories broadcast live on television every day and respectful headlines on top of stories about “disagreements” between people with a lifetime’s expertise in epidemiology, like Dr. Anthony Fauci, and a self-satisfied moron hawking snake-oil solutions. The advent of Covid-19 is a crisis, to be sure, but even more so is a political culture that has produced a coronavirus-like presidency, implacably infecting and destroying what remains of our ailing democracy.