Tom Seaver, one of the greatest pitchers in baseball history, died last week at 75. While his pitching exploits put him in the Baseball Hall of Fame—he won 311 victories, had 3,640 strike-outs, won three Cy Young Awards as best pitcher in the National League, and ended his 20-year career with an astounding earned-run average of 2.86—it is what he did and said off the baseball diamond that resonates now more than ever.

Seaver joined the New York Mets in 1967. That year the team placed 10th out of the 10 teams in the National League. The next year, they finished ninth. But in 1969, Seaver not only led the “Miracle Mets” to a World Series victory; he also joined the ranks of the anti-war movement—a stance overlooked by many of the media obituaries. He did so at a time of growing opposition to the Vietnam War but within a baseball culture that was the most conservative and traditional of the nation’s major sports. By 1969, Seaver had already been voted the National League’s Rookie of the Year and been an All-Star all three seasons.

By most measures, Seaver was an all-American boy. His father was a business executive and his mother a homemaker. He had joined the US Marine Corps Reserves after high school. After six months of active duty, he enrolled at Fresno City College, then transferred to the University of Southern California, one of the country’s most conservative campuses. He posted a 10-2 record his sophomore year, before signing a contract with the Mets. He remained a part-time member of his Reserve unit until 1970. He displayed no affinity for the counterculture in his hair, dress, rhetoric, or personal style. But he often visited wounded Vietnam veterans in hospitals and was upset by their suffering for a war that he viewed as immoral.

Because of his military service, Seaver had credibility about the war that other players did not, but his public stance against it triggered controversy.

Seaver was scheduled to pitch the first game of the World Series against the Orioles in Baltimore on October 11. That morning, The New York Times ran a story in which Seaver expressed his opposition to the Vietnam War.

“I think it’s perfectly ridiculous what we’re doing about the Vietnam situation,” he told the Times. Seaver said that if the Mets won the World Series, he would buy an ad in the Times saying, “If the Mets can win the World Series, then we can get out of Vietnam.” Seaver added, “I feel very strongly about this.” Seaver lost the first game of the series but was slated to pitch the fourth game at Shea Stadium in New York.

That day, October 15, hundreds of thousands of protesters gathered in cities around the county under the auspices of the Moratorium to End the War in Vietnam. By then, despite President Richard Nixon’s promise to find an “honorable” peace, discontent with his policies had moved far beyond the campuses and into the mainstream.

In the Mets clubhouse before the fourth game, his teammate Tug McGraw showed Seaver a pamphlet being distributed outside the ballpark by anti-war protesters under the banner: “Mets Fans for Peace.” Headlined “Tom Seaver Says U.S. Should Leave Vietnam,” the pamphlet reprinted part of that morning’s New York Times article.

Seaver claimed that he hadn’t been asked for permission to use his name in the pamphlet. But prior to the World Series, the anti-war Vietnam Moratorium Day committee had asked him to sign an ad opposing the war. Seaver agreed, explaining that “the war was not helping the American image abroad, was splitting the country apart at home, and was not adding much to our national security.”

The political atmosphere inside the ballpark was another story. New York City Mayor John Lindsay, an opponent of the war, had decreed October 15 a day of mourning and ordered all city flags to be flown at half-mast, including those at Shea Stadium, which the City owned. That idea didn’t go over well with the honor guard of 225 wounded veterans, who were supposed to participate in the game’s opening ceremonies. They told City officials and Mets brass that they would physically resist any effort to place the flag at half-mast. Baseball Commissioner Bowie Kuhn intervened and ordered that the flag be flown at full staff.

When the public address announcer identified Seaver as the starting pitcher, the fan response was less enthusiastic than usual. Some fans even booed the team’s best pitcher, who had been 25-7 during the regular season. According to sportswriter Ray Robinson, there were “too many [pro-war] hawks fluttering around in their expensive seats at Shea.”

Seaver beat the Orioles in the fourth game, and the next day the Mets clinched the series in five games. After the game, Seaver reminded reporters that “I am against the war and want us to get out as soon as possible without endangering lives.” Two months later, on December 31, 1969, he and his wife Nancy placed an anti-war ad in The New York Times, as he promised the protesters he would do: “On the eve of 1970, please join us in a prayer for peace,” it read. 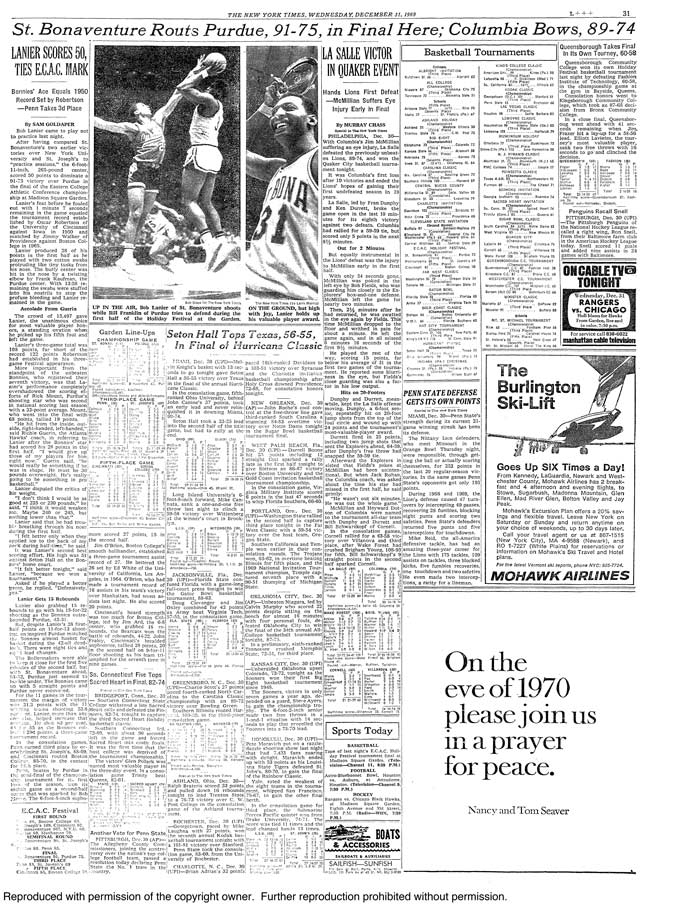 Seaver’s outspokenness ran counter to the prevailing ethos of baseball and to the common belief that professional athletes should just play and keep their political opinions to themselves.

Of course, not all pro athletes fell into line. And starting with Jackie Robinson, Black athletes were more outspoken on social and political issues than their white counterparts. In the turbulent 1960s, track stars John Carlos and Tommie Smith at the 1968 Olympic Games in Mexico City, Muhammad Ali in boxing, Jim Brown in football, Arthur Ashe in tennis, Bill Russell and Kareem Abdul-Jabbar in basketball, and Roberto Clemente in baseball used their celebrity as platforms to express their opposition to racism and US militarism.

White athletes were generally more reluctant to express dissenting views, although there were exceptions like Bill Walton, Jim Bouton, and Ted Simmons.

The Trump era has triggered an upsurge of activism and outrage among pro athletes—white as well as Black. Best known is quarterback Colin Kaepernick, whose decision to kneel during the national anthem triggered attacks by Trump and his own blacklisting by NFL teams, even while inspiring athletes from high school to college to professional sports to emulate his actions. But there’s been a lot more.

Washington National pitcher Sean Doolittle, LA Lakers star LeBron James, soccer great Megan Rapinoe, and many other athletes have opposed Trump’s exclusion of immigrants and asylum seekers, his racist comments after the neo-Nazi march in Charlottesville, and his harsh statements against athletes kneeling during the national anthem. James has raised millions of dollars to ensure voting rights heading to the November election. Players on championship NFL, NBA, and MLB teams, as well as the World Cup–winning women’s soccer team, have refused invitations to celebrate their victories with Trump at the White House.

Pro athletes have also responded to the murder of George Floyd and the police shooting in Kenosha, Wis. of Jacob Blake. The Milwaukee Bucks basketball team refused to play an NBA playoff game last week to protest the Blake shooting. Players George Hill and Sterling Brown, both African American, drafted a statement explaining the team’s refusal to play.

“We are expected to play at a high level. Give maximum effort and hold each other accountable. We hold ourselves to that standard, and in this moment we are demanding the same from lawmakers and law enforcement,” Brown said.

Other NBA teams followed the Bucks’ actions. Player defiance on several Major League Soccer and WNBA teams forced the cancellation of games. Naomi Osaka, a top tennis star, announced that she wouldn’t play in Thursday’s semifinals of the Western & Southern Open. “Before I’m an athlete, I am a Black woman,” she tweeted.

NFL players discussed going on a wildcat strike during the season openers, scheduled for September 10. Faced with this player uprising over racial injustice, the NFL appeared to give its legal blessing for players to break their union contracts and refuse to play those games. Instead, the players will be kneeling during the national anthem—with the consent of team owners. A few coaches, including the Texans’ Bill O’Brien, will join them. Many players will display the names George Floyd, Breonna Taylor, and Jacob Blake—recent victims of police shootings—on their helmets. And some teams may print anti-racism messages, like “Black Lives Matter,” in the end zones.

In baseball, the Milwaukee Brewers—led by white outfielders Christian Yelich and Ryan Braun—refused to take the field in solidarity with the Kenosha protesters. Other MLB teams followed suit.

Baseball’s Stadium Workers Are Getting Peanuts From the Billionaire Owners

In New York, Seaver’s former team, the Mets, and Miami Marlins initially took the field, but left after a planned 42-second moment of silence honoring Jackie Robinson’s retired uniform number. After the players left the field, all that remained was a Black Lives Matter shirt covering home plate.

Mookie Betts, the Dodgers’ only African American player, told his teammates that he was going to sit out a game with the San Francisco Giants in protest. Betts was joined in solidarity by the other 27 players on the team.

Hall of Famer Lou Brock, one of baseball’s greatest base stealers who helped the St. Louis Cardinals win three pennants and two World Series titles in the 1960s, also died recently at age 81. No batter faced Seaver more than Brock, and no pitcher faced Brock more than Seaver during their overlapping major league careers. The two faced off 157 times. Seaver struck out Brock 21 times and walked him four times.

Tom Seaver was a dominant pitcher with a political conscience, a Marine veteran, and a proud and patriotic American. His actions in 1969 opened a space for other activist athletes to use their fame and wealth to take a stand for social justice.

Is UPS Retaliating Against Union Activists?