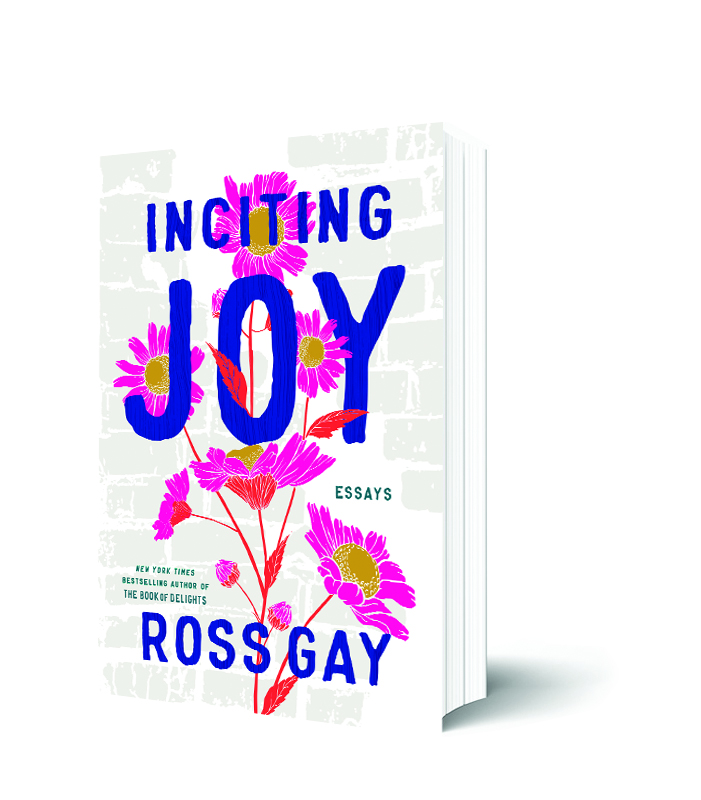 Ross Gay is a poet, essayist, professor, and avid gardener and orchardist based in Bloomington, Ind. His 2015 Catalog of Unabashed Gratitude won the National Book Critics Circle Award and the Kingsley Tufts Poetry Award. The Book of Delights (2019) became a New York Times Best Seller. His latest book, Inciting Joy (Algonquin), is an exploration of joy as a critical emotion that “gets us to love, as a practice of survival.” Gay and I spoke in September about learning to negotiate caring for one another in space, the “utility of school,” the uses of gardening for the “acutely bereaved,” and why so many are resistant to seeing grief as the inherent twin of joy. This interview has been edited and condensed for clarity.

ara ranklin: You write, “My hunch is that joy is an ember for or precursor to wild and unpredictable and transgressive and unboundaried solidarity…My hunch is that joy, emerging from our common sorrow…might depolarize us and de-atomize us enough that we can consider what, in common, we love.” Tell me a bit about those lines and how this book came to be.

oss ay: I started writing this in earnest when I was watching the greatest upward transfer of wealth in, maybe, the history of history? I don’t mean how Jeff Bezos and Bill Gates are going to survive. We know what they’re going to do; they’re going to steal all the survival. And I was watching the NBA playoffs and saw that the Atlantic Hawks had “MLK” on their jersey. It was so enraging to me that this kind of radical anti-imperialist figure was being put on the shirts of an NBA team. These mother-f*#%ers can steal anything.

I was—and am—curious about how we might survive the collapse we’re in the midst of. We’re really going to need to know how to study the practices we already have that have built into them—maybe are actually borne of—structures of care. Like dancing. Dancing is a big deal in the midst of institutional collapse. Being in proximity with each other’s bodies and listening and paying attention and getting our different rhythms in the same space set up together. Or pickup basketball. Built into these things there are all these sorts of ways that no one can have everything, and that you cannot do it by yourself.

SF: How did you decide to use the word “incite” in the book’s title? It’s a striking word, and one we don’t usually see paired with the word “joy.”

RG: I was thinking about the word “provocation,” but “incitement” has more juice to it. I’m talking about the ways that care or sharing or these things that are in this mix of this conversation around joy—regarding each other’s sorrows, and helping each other carry them. Those are incitements because they suggest we might care for one another, that we might in fact depend on and be indebted to one another. And that, to me, is a kind of incitement. One of the through lines of this book is: What happens if we share our shit? Fundamentally? That’s trouble for a certain mode of life.

SF: I’ve heard you say that people come to your readings and they really seem to be missing the boat. They want a “how-to” for delight and for joy. But you’re trying to drive home this notion that joy is a byproduct, or a maybe even a direct result, of loss and grief. But also of labor—relational labor, physical labor, deep internal excavations, care work of different kind. Why do you think so many people misread you or are resistant to this shift in perspective you’re inviting them to explore?

RG: I think there are a bunch of reasons. One is, people are sort of desperate for good news. I get that. I also wonder if there’s some degree of absolution. You know: “He’s happy, this guy’s happy.” I’m talking about race. “This Black dude.” A desire to construe a certain kind of “everything’s OK” Black person. Which is also a kind of misreading that happens on another side too, which is why are you talking about delight? They’re kind of like twins. There are plenty of people who think that joy is not serious. But I’m arguing for joy as a rigorous emotion that excludes no one and the repression of which is a kind of alienation, a suggestion that we ought to be alienated from one another. I think we have a profoundly immature idea of emotional states and have developed a sensibility that suggests sorrow and delight cannot coexist.

SF: There are some essays here that are going to get some people into difficult places—I hope, productively. For example, in “The Grief Suite: Falling Apart,” you offer a real provocation when you say, “Grief is not gotten over, it is gotten into,” and that, “in understanding what the grievers bring back to us…everything will change, and for good.” I’m curious how you came to that.

RG: On a personal level, I was in this mindfulness class, and we had an exercise. The teacher asked, “How was it?” Everyone said it was fine except this one woman who said, “I didn’t like it.” And the teacher said, “Is it OK if we think about this?” This was a foreign language to me, this checking in. The woman said yes, and it came out that she was sad. The teacher was taking care of her, but as it was going on, it felt, to me, like a brutality. And, I realized it felt precisely like what it felt like when I would go visit my mother, like something was compressing my chest. I was having the same exact feeling in this class. I realized my refusal to engage with other people’s sorrow is my refusal to engage with my own sorrow. I realized that a certain part of myself would rather die than be sad, because being sad reveals that you’re entwined with people. That can be horrifying.

SF: What’s your relationship to that now?

RG: The delight practice, for me, is not just to note what’s beautiful or to note what you love, but to notice, articulate, and share what you love. And part of that sharing is the social expression of debt that you would never want to forgive or have forgiven, and the reminder of the bounty of connection.

RG: When I talk about that book, some of the horror of “masculinity” and “white supremacy” and consumer capitalism is the nightmare dream that we are not entangled. That we might not need one another.

SF: Tell me about teaching. It’s been a really strange and significant time to be an educator these past couple of years. What has your experience been like?

RG: I’ve been profoundly skeptical of universities and institutional education for a while, but in the last couple years, it’s gotten a little clearer that these institutions are affectively branches of a certain kind of wretched economic, social, spiritual scene. I’m more attuned to how much we need each other. The utility of school—which is also the utility of relationships, period—is that we get to come together, and be like “what do we do with our unknowing, together and around it?” We need to know how to be with each other, to negotiate and care for each other in space.

SF: Do you hope, or think, that higher education of the sort of place you teach in is going to last in this crisis that we’re living into?

RG: I don’t know that higher education anticipates its own survival. I don’t know how it could. It’s just part of an extractive model, seems like we’re in the throes, gobbling up everything they can get. I think it’s really just making soldiers. My brother is a high school principal, and he said, off the cuff, that compliance isn’t really a higher order skill. If there are going to be principals, that’s the principal I want.

SF: You write about gardening as a site of “unknowing,” and a practice reveals how much we don’t know. Tell me more about that.

RG: A seed contains the past and the future at the same time. When you start to garden, you realize that what’s gone is not really gone; it doesn’t get to go away without going into something else. The garden is interesting and beautiful because it’s a place where things go on. You’re going to put a seed in, and even if that seed doesn’t take, seeds are going to take. To be in that practice is really vital. But as much as you think you know about gardening, every season, you know you know nothing. That unknowing is a kind of submission, another word for which is curiosity or being beholden. When the thing happens that you thought might happen or the thing happens that you didn’t know would happen or might be beautiful, you’re like, Oh my God. Thank you. Thank you.