Two years ago, the Danish architect Bjarke Ingels, along with MIT and Oceanix (a start-up developing new ways to build on water), released a sprawling techno-utopian plan called Oceanix City, a community of 10,000 meant to float off the coast of New York City. Reading the press release is like assembling a collage of eco-technobabble, containing everything from the idea of being “resilient” (which here means “not flooding”) and the use of solar panels to hydroponic farming and a “zero waste” food policy. Of course, Oceanix City, an abstract utopia (meaning a utopia built by technocrats and operating within the existing social framework) assumes an almost entirely consumption-oriented habitat rather than a production-oriented one—meaning that other, less fortunate nations will still be the ones toiling in absentia to bring all the luxuries of everyday life. Ten thousand people, when considering the total population of New York City, is not a lot of people. And while the directive insists that the eco-villages will be affordable, nobody involved quantifies how affordability will be determined or maintained.1

The more one reads into the design brief, the more one finds details that initially seem chipper but are, in reality, rather sinister: for example, the tidbit about how the project is meant to survive a Category 5 hurricane—something New York City itself is not. What we are seeing here is, in effect, a scarcity mentality couched in the jargon of sustainability, pure escapism masquerading as some kind of vague ideal society of (checks notes) people who live on floating solar-panel islands presumably working from home while the rest of New York drowns. Oceanix City is a project I return to frequently in my writing because it is a perfect example of everything wrong with contemporary design’s so-called big dreams. However, it’s not a stand-alone instance of egregious cynicism masquerading as idealism. No, the project is emblematic of a broader trend of endlessly salable techno-utopias, which include remarkably insipid things like 3D-printed tiny houses to solve homelessness, underground luxury bunker communities, and skyscrapers suspended from asteroids.2

The technology for each of these ideas may be new (or even nonexistent), but they are, in fact, old ideas repackaged in glitzy new renderings—in the case of Oceanix City, by boyish starchitects who are very good at using PR and fantastical imagery to conveniently shield the fact that they are happy to work with environmentally destructive despots like Jair Bolsonaro (as Ingels attempted to do, unrepentantly). One can find a number of precedents for such projects dating specifically to the 1960s and ’70s, a period not dissimilar to our own: one of financial and social crisis, beset with questions about the future of both the city and the earth itself. From financialization to gas shortages to housing crises to increasing existential dread regarding the environment, what’s old is truly new again. It’s no surprise that half-baked ideas from this former period have re-emerged in their current, even less inspiring forms. (At least the projects from mid-century both looked and were, in many ways, cool.) The first of these are megastructures. Megastructures are, according to the Japanese architect Fumihiko Maki (whom the historian Reyner Banham credits with inventing the term), “large frame[s] containing all the functions of a city, mostly housed in transient short-term containers.” They’re further defined by a shared compositional form (“composed according to traditional Modern Movement precepts”) and group form (“accumulation of identical spatial or structural elements into larger complexes”).3

By that definition, Oceanix City, with its prefabricated, geometric patterns and installations, certainly fits the bill. However, just as Oceanix appropriates the imagery of sustainability (wood framing, green space, solar panels), the megastructures of the 1960s and ’70s (almost all of which remain speculative and unbuilt) appropriate the hallmarks of high modernism. In the case of Paul Rudolph’s mass housing proposal for the Lower Manhattan Expressway, that meant the highway. Rudolph’s plan featured sprawling, angular brutalist apartment buildings suspended over the infamous proposed highway that was supposed to plow through Lower Manhattan and ended in being canceled, thanks to concerted community activism. Or consider the sublime industrial landscapes that litter the outskirts of many a metropolis, such as the massive, space-framed, fractal-like megacity plans of Japanese Metabolists like Maki and Kisho Kurokawa. These megastructures were typically conceived as massive, prefabricated closed systems, many of which were suspended above an existing urban fabric (often a highway) or, like Oceanix City, floating in a bay or harbor.4

This Way to Utopia

Shulamith Firestone Wanted to Abolish Nature—We Should, Too

Disabling Utopia to Save It

What Will Be the Language of Our Digital Future?

In these cities, both those that were speculative and those intended for real production, all functions of life have been designed and allotted modular units that would then be attached to a system of other units. Yet, in reality, all megastructures do, in the words of architecture historian Felicity D. Scott, is attempt “to make architecture congeal the…forces of capitalism as form and to adopt its modes of visuality.” For all their supposed flexibility, their functions resemble instruments of control as much as anything else. All of the terrible things in the world and in cities, things that are inherent to the oppressive division of social relations wrought by capitalism, would effectively still exist in these hyper-designed, hyper-rationalized spaces. This, of course, prompts the question: Utopia for whom?5 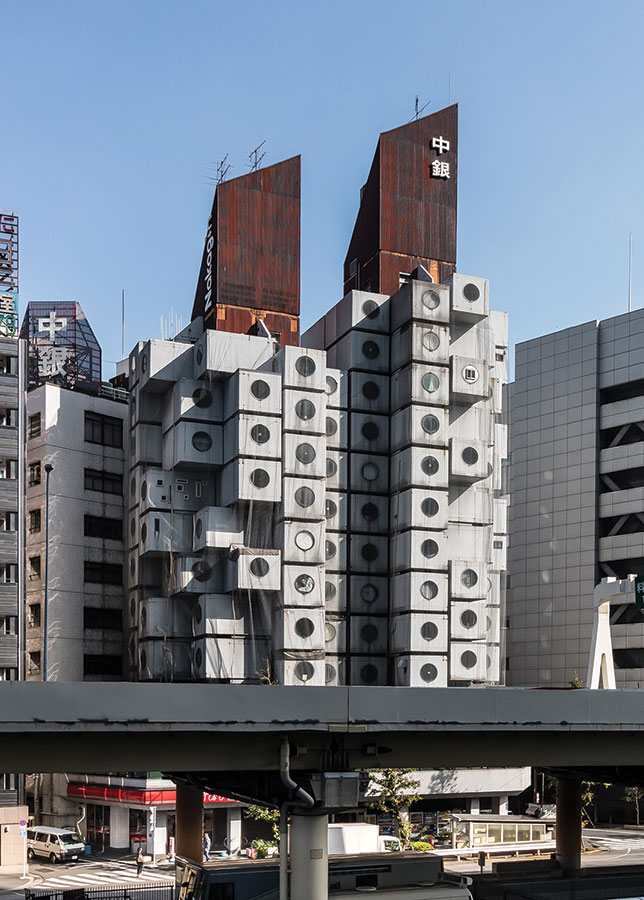 Modular decay: The Nakagin Capsule Tower in Tokyo, one of the few Metabolist projects that was actually built, has fallen into disrepair. (CC 4.0)

The other thread in the Oceanix City vision of the future is one of ecological escapism. In this, it also owes much to the hippie mindset of the 1960s and ’70s, when things like communes and dome cities seemed to promise escape from the aforementioned social relations (surely one cannot be alienated from one’s own labor if one quits one’s job and jets off to the desert to live communally!). Drop City, an experimental geodesic-dome building project founded in 1965 in a Colorado pasture, is perhaps the best-known example of this phenomenon, of a city that aimed to sever all ties with existing social structures. Half extended art project and half bizarre interpretation of the ideas of Buckminster Fuller (the populizer of the geodesic dome), Drop City domes were made of both cheap, new, mass-produced building materials like silicone caulks and vinyl and items upcycled from junk yards, making it one of the earliest attempts at low-waste architecture, albeit somewhat kooky and misguided.6

Its building plans were provided by a zine called the Dome Cookbook, by an ex-mathematician named Steve Baer, a kooky character in and of himself who wrote sprawling, possibly acid-inspired treatises on innovative geometries. With the use of recycled materials, Baer and company argued that “everyone in the world can have a beautiful, comfortable dwelling unit for less than $1,000.” According to Scott, in order to declare independence from the lumber industry, the Droppers (as they dubbed themselves) invented a new shingle style out of recycled car tops. Citizens were essentially scavengers, feeding off the waste of a gluttonous America. If this sounds ill-fated to you, you’re right, it was. Domes, as cool as they are, are not practical; they’re notoriously leaky and are difficult to turn into functional homes with, you know, more than one room. Also, living out of domes made from trash had obvious health effects (all that sheet vinyl languishing in the sun stank and put toxic fumes into the air). Also, unfortunately, the mere revolutionary structure of the geodesic dome was not enough to actually bring about any real social revolution, and, as in many communes, times got desperate, things broke apart, and what was once an eco-paradise became nothing more than an abandoned trash heap in a goat pasture. So it goes.7

While one cannot deny that Rudolph’s megastructure drawings and models for Lower Manhattan or a bunch of architecture hippies tripping on acid while living in trash domes are definitely cool, these utopias, in the practical sense of the term—as imaginaries of an ideal society—frankly suck. As a result, their progeny, be they in the form of 3D-printed tiny houses for the indigent or spurious off-shore eco-villages, also suck. The reason they suck is simple: Design, while obviously involved in the process of world transformation, cannot by itself solve social problems related to climate and urbanization.8

That’s not to say that all utopian experiments and lines of thought in architecture suck. In fact, there’s a great deal we can learn from the utopian thinking of the past. Arts and Crafts movement pioneers and utopian socialists William Morris and Walter Crane, writing in the 1880s, argued for unalienated handiwork, authenticity in craft, and an escape from the new modes of mass production and their exploitative division of labor, which they saw as the destroyers of both art and life. At the core of their praxis is a simple but still revolutionary belief that we should be free to do as we please and labor as we want to, not as we are forced to in order to survive. This was an ideal that powered the Bauhaus in its earlier years, before its turn toward mass production. We can look also to the broadly humanitarian if not utopian visions that brought us what little remnants of the welfare state we have left: council housing in Britain and public housing in the US (both worthy and functional causes now picked clean by neoliberalism) or even the New Deal, which, though problematic, provided thousands of beautiful and functional public buildings in varying architectural styles across the country.9

We have the tools and the protocols to build a real architectural and ecological utopia already at our fingertips. These include systems of alternative energy consumption and production; building systems like Passivhaus that use dense insulation and massive walls to conserve energy; landscape architecture that is sensitive to existing ecosystems; urban planning for mass public housing and transportation to replace oil-burning car dependence; preservation protocols to adapt, save, and reuse existing structures; and hundreds of years of architectural precedent to be influenced by. What we lack, actually, is imagination, drive, and political will. As we can see by the current movements in tenant organizing and advocacy for a Green New Deal, that’s changing too. All the ingredients for a better world are there—it’s now up to us as political and social actors to fight like hell for them.10