In New York City, the global epicenter of the Covid-19 pandemic, the shocking number of people killed has been accompanied by devastating economic fallout. More than 22,000 in New York State have likely died from the novel coronavirus. With many businesses shut down, billions in tax revenue are gone. For the first time since the 1970s, New York City, America’s wealthiest municipality, is at the fiscal brink.

Public schools, transit, and social services could all see severe cuts in the forthcoming state budget, punishing the working class and poor. That is likely to include cuts to the City University of New York. If federal stimulus money doesn’t arrive—and Governor Andrew Cuomo resists raising taxes to avoid gaping shortfalls—this world-class public higher-education system may be crippled. CUNY, which includes 25 campuses around New York City, was underfunded before the pandemic. Its colleges are now bracing for major layoffs.

One senior college has said that it may not rehire the vast majority of its adjunct professors. Another is seeking to slash course offerings by as much as 25 percent.

“In the middle of this pandemic, it’s obscene,” said James Davis, a professor of English at Brooklyn College and a chapter chair in the Professional Staff Congress (PSC), the union representing CUNY professors. “It’s a bloodbath.”

Though CUNY is located in New York City, much of its funding—and its fiscal future—is determined by the state government in Albany. Governor Andrew Cuomo’s press conferences have drawn praise from liberal pundits and rocketed his approval rating to over 70 percent. But he is widely loathed by higher education advocates and unionized professors in New York, who blame him for failing to lavish more state aid on the public colleges before the pandemic.

Cuomo has governed New York state since 2011. State aid to CUNY, adjusted for inflation, has declined by nearly 5 percent during his tenure, though the state’s gross domestic product has increased.

At the same time, CUNY tuition has steadily risen. A New York State resident who is a full-time student at a four-year CUNY school now pays $6,930 a year, up from $5,130 in 2011. New York’s Tuition Assistance Program, which provides aid to students below a certain income threshold, no longer covers the full cost of tuition, and Cuomo forces individual colleges to make up the difference. Another tuition increase of $200 per year, along with a $120 “health and wellness” fee, is set to be voted on by the CUNY Board of Trustees in June.

While the cost to attend a CUNY college is still lower than that of many other large public institutions around the country, CUNY’s 271,000-large student body is overwhelmingly low-income: Forty-two percent of all first-time freshmen come from households with incomes of $20,000 or less, and more than 70 percent of students enrolled at senior and community colleges identify as nonwhite.

“It’s a hugely important system because of the nature of the students it serves,” said Thomas Brock, director of the Community College Research Center at Teachers College, Columbia University. “And it has a really important role in higher education more generally. Historically, it’s done a very good job helping low-income students move into the middle class.”

At the John Jay College of Criminal Justice, the vast majority of adjuncts say that they found out earlier this month that they were not rehired for the fall semester, meaning classes could be dramatically larger come September. Brooklyn College and the College of Staten Island are grappling with proposed overall department cuts as high as 30 percent, which would also most likely lead to layoffs.

Meanwhile, the PSC anticipates that actual student enrollment for this fall could increase, as it did during the last economic downturn in the 2000s. Simultaneously, course offerings could shrink, meaning students could struggle to complete their majors on time. Full-time faculty and adjuncts would strain to give any kind of individualized attention to students, especially if CUNY continues remote instruction but with far larger classes.

For adjuncts, many of whom are hired only semester to semester, the layoffs are traumatic. Though each adjunct earns only several thousand dollars per course, they are able to access comprehensive health insurance through PSC. “The biggest problem is stress,” said Elizabeth Hovey, an adjunct professor and union leader at John Jay. “People in this era shouldn’t be threatened with the loss of their health insurance.” 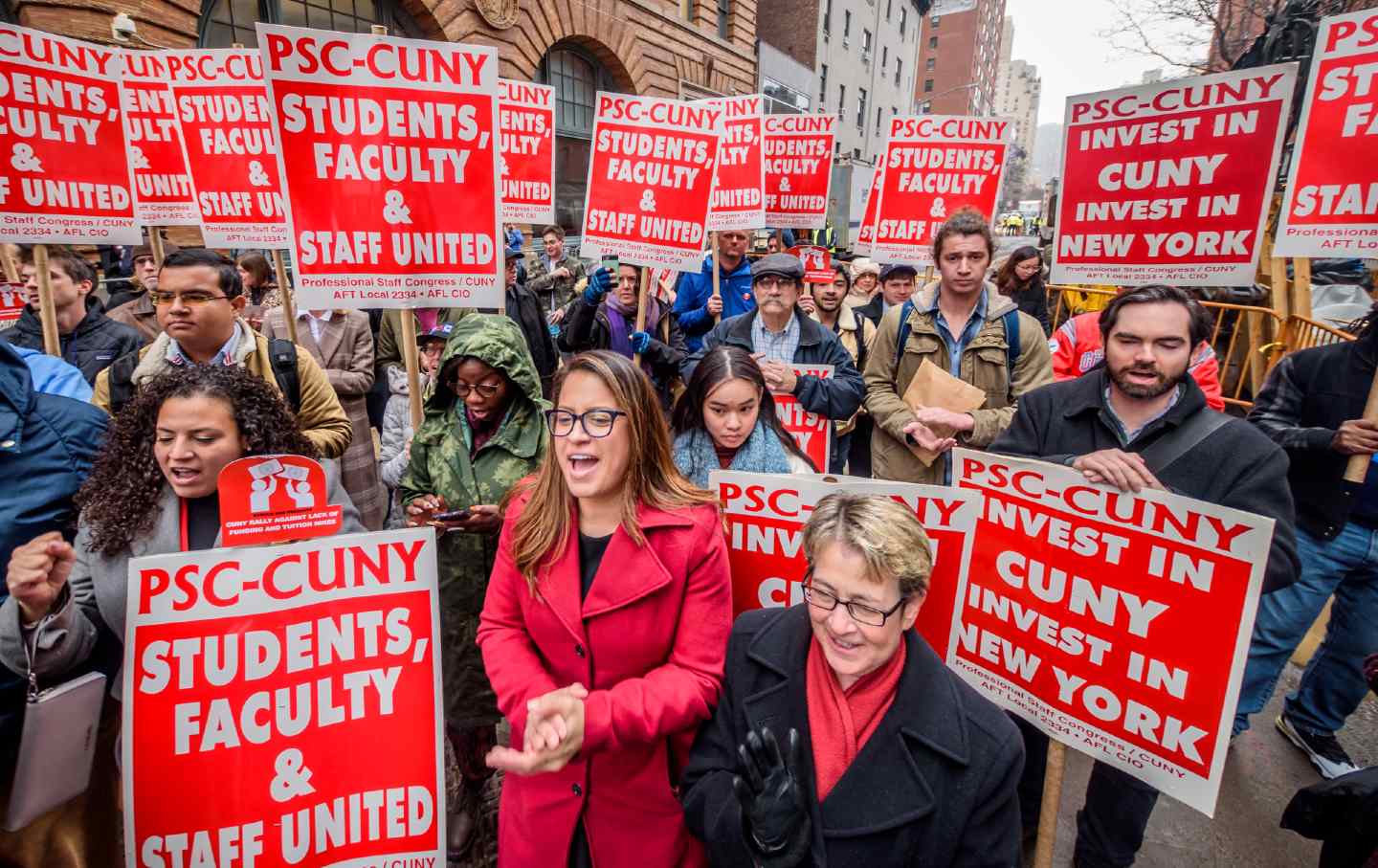 Many say CUNY was underfunded before the pandemic. Elected officials, PSC-CUNY members, staff, and students at a rally against tuition hikes outside Baruch College, one of the CUNY’s 25 schools, February 6, 2020. (Erik McGregor / LightRocket via Getty Images)

CUNY has a long history of both expansion and contraction. Though the university system itself was formally created in 1961, some individual CUNY colleges date back further. City College and Hunter College both were founded in the 19th century. Brooklyn and Queens College were created during the depths of the Great Depression, in 1930 and 1937, respectively. A hub of radical thought and high achievers, City College, in particular, was known as the “Harvard of the proletariat.” Thirteen Noble Prize winners are among CUNY’s alumni.

Until the mid-1970s, CUNY was largely tuition-free. Then, in 1975, New York City nearly went bankrupt. White flight, the decline of manufacturing, and poor fiscal management had driven the city into a fiscal crisis that would haunt it for decades to come, even after the economy recovered.

For CUNY, it was a tragic turning point. For the first time, tuition was imposed for all students and the budget was drastically cut, resulting in mass layoffs, reduced course offerings, and a noted decline in building maintenance. Advocates at the time correctly predicted that once CUNY introduced tuition, administrators would never make the schools free again.

Now, the specter of another fiscal crisis looms, this time because of Covid-19. New York City no longer faces the structural challenges it did during the 1970s—the city’s economy was humming along until March—but the evaporation of tax revenue is a disturbing echo of that era. What’s uncertain, still, is how hard the latest budget axe will fall.

Thanks to new powers granted by the state legislature when New York state’s budget was passed in April, Cuomo has the power to impose rolling cuts on local services throughout the year. The governor has said that without a fresh infusion of federal funding, aid to localities could be slashed by more than $10 billion, a number that has no precedent in modern times.

K-12 public schools across the state, the State University of New York system, and CUNY could be hit the hardest. In the coming days, Cuomo is expected to detail the severity of this first round of cuts. In addition, a CUNY representative told The Nation that New York City’s government, which partially funds the system, is seeking a $31.6 million reduction target for the next fiscal year, starting in July.

The architect of New York State’s draconian cuts is Cuomo’s budget director, Robert Mujica, now one of the most powerful people in the state. Mujica is a former Republican staffer who shares Cuomo’s willingness to shrink budgets.

In early 2016, in a far better economic climate than today’s, Cuomo attempted to slash state aid to CUNY by nearly $500 million. After encountering fierce backlash, Cuomo reluctantly backed off the plan. A few months later, however, he appointed Mujica—a CUNY alumnus—to the CUNY Board of Trustees, consolidating the governor’s office’s control over the university system.

Freeman Klopott, a spokesman for the state’s budget division, argued that Cuomo’s government had been generous to CUNY in the past, and that the coronavirus-induced economic crash necessitated cuts.

Columbia Has the Chance to Expose the Lie of Austerity

“New York State is contending with a 14 percent revenue loss, amounting to $61 billion over four years,” Klopott said in an e-mail. “About 90 percent of state funding goes to schools, health care, local grants, and services for the most vulnerable populations. In the absence of federal funding, we will have to cut spending, with a plan for specific reductions coming this month.”

This statement was echoed by a CUNY representative: “The state is facing a more than $13 billion revenue shortfall due entirely to the pandemic, and if the federal government doesn’t step up to offset those losses, the state will have to reduce spending by billions of dollars to balance its budget.”

CUNY professors and students are directing their anger toward both Cuomo and the administrators of certain senior colleges who are preemptively telling department chairs to start cutting staff and reduce course offerings. They feel that schools should wait to find out whether federal stimulus money will show up, or the Democrat-controlled legislature will force Cuomo to approve tax hikes.

So far, the New York State Legislature has been largely content to fade into the background as Cuomo’s popularity soars. Legislators have not met remotely to pass any bills since the budget was approved at the beginning of April, though that is expected to change soon. Some Democrats are pushing Cuomo to enact new taxes on high-earners—something he has historically resisted doing—to help offset the enormous gap in funds.

State Senator Toby Stavisky, the Democrat who chairs the Senate’s Higher Education Committee, introduced a bill last week to temporarily raise taxes on those earning more than $5 million to help fund K-12 schools, SUNY, and CUNY. Whether the bill will make it through the legislature and to Cuomo’s desk is still unclear.

“CUNY hasn’t been properly funded for probably two decades, if not longer, because more and more of the burden has fallen on students, and not the state,” said Stavisky. “We just can’t take a meat cleaver and slash.”