Republicans are attacking the right to be safely queer in public at all levels of government. One of the key fronts in this assault against LGBTQ rights is in the schools. Conservatives are censoring teachers and students across the country, making it difficult for schools to be safe havens for queer youth. Florida recently passed a bill dubbed “Don’t Say Gay,” which bans the discussion of sexual orientation and gender identity in some elementary school grades and constrains it through the 12th grade. Other states are now pushing for similar legislation.

In this climate, school administrators shut down a student newspaper at Northwest High School in Grand Island, Neb., alongside its journalism program. The offense? Students had made LGBTQ stories the focus of their June issue. The story broke nationally at the end of August, sparking outrage and and inspiring support for the young journalists from across the country.

The students’ decision to tell queer stories followed a new school policy forcing the newspaper, Viking Saga, to call journalists, including trans columnist Marcus Pennell, by their birth name, not their chosen name—a practice known as deadnaming. The students reluctantly followed those orders, but it didn’t stop administrators from shuttering the 54-year-old newspaper.

Pennell’s final column explained the harms of Florida’s bill and addressed misconceptions around the law. It “isn’t going to prevent children from being gay,” he wrote, “but instead leave children who happen to be gay with psychological damage that lasts a lifetime.”

A school board member used the issue to justify their decision, according to The Grand Island Independent: “If [taxpayers] read that [issue], they would have been like, ‘Holy cow. What is going on at our school?’” 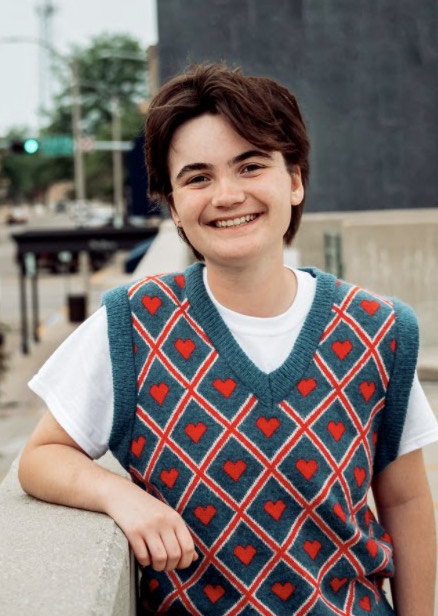 Marcus Pennell was a columnist at the Viking Saga. (Jessie J Photography)

aren g: Tell me about what happened when your principal demanded that the newspaper print your deadname.

arcus ennell: It was really hard. It was the first time they had officially been like, “We don’t really want you here.” I face some problems from my peers, but coming from the adults in my school, that was a totally different ballgame for me.

KN: Was there any pushback from students?

MP: We were told that if we didn’t follow this policy, the consequence would fall on our teacher—so we didn’t want that to happen. She was so amazing and supportive, and we were like, we’ll just follow this dumb rule.

KN: I can imagine that must have been horrible.

MP: Yeah, it was kind of awkward. It’s like my work is being attributed to someone that isn’t me.

KN: Why do you think student newspapers are important in your high school and in the wider community?

MP: It’s important for students to have a voice and to be able to share their thoughts and opinions with anyone. And of course, the paper provided great opportunities for kids too. We went to state last year and took home third place [at the 2022 Nebraska School Activities Association State Journalism Championship].

KN: Your column in the June issue was about “Don’t Say Gay,” a bill that limits and silences queer conversation in schools. Do you think the bill had something to do with the school’s decision?

MP: I definitely think they were impacted by it. Yeah, yeah I do.

KN: Did they talk to you guys about their motives at all?

MP: Not really, but we all kind of could tell. If you asked around, the admin would say it was an administrative decision. But there’s that exact quote from the school board president, where he said [something along the lines of], “If the taxpayers would read this, they would say, ‘Holy cow, what is going on in our school?’” So we knew that it was more of a homophobia, transphobia thing, than really cutting the paper and really caring about the students. It was about trying to silence the LGBT kids at Northwest.

KN: You mentioned there have been other instances of discrimination amongst peers—would you be comfortable with talking about them?

MP: There were never really any huge instances, just side comments in the hallway, or a group of boys used to meow at me, and make cat noises at me—which I’ve never even understood. Just stupid stuff like that. Otherwise, it wasn’t too bad. There was never any physical violence—I’m so thankful.

KN: What was your newsroom’s reaction when you found out the school was shutting down the newspaper and program? How did you find out?

MP: I actually was graduated already, and I found out this summer. I got a call from my teacher, and she said, “I don’t know why this happened, or who made it happen, but this is what happened.” I was just so defeated. I thought it was over, I thought it was a hopeless case. I thought the journalism program was just going to be gone forever. But obviously, we’re fighting now to make it come back. And it’s going well.

KN: Can you talk to me about how that’s been working out, and what kind of support you’ve been receiving so far? I saw the ACLU posted a letter.

MP: They just published that letter, and I really think they’re going to follow through with all that. A bunch of different news sources are reaching out to me, and a bunch of people just want to help me.

KN: What do you think the sense of queer community is like at your school?

MP: We all knew how to find each other. I think not having a community really gave us that community, if that makes sense. We didn’t really fit in at school, but we fit in with each other. So that’s what mattered. I found a lot of that support in the newspaper room and in my theater class. I found some places that accepted me, and I wasn’t the only one. There’s definitely a good handful of queer students at Northwest—just like there is at every school.

KN: As of now, the program isn’t back up and running and neither is the newspaper. What do you think that means for queer Northwest students going forward? Is the school still a safe place without these modes of free expression?

MP: The admin or whoever cut the paper definitely set a dangerous example with what they did. If the admin can bully LGBT students, who says that other students can’t. I would definitely be scared [if I were a student at Northwest now]. Hopefully, it can get better and change.

KN: Queer literature and now newspaper columns are being banned in schools across the country. What do you think not having free access to both news and books that depict queer people means for young people in the US?

MP: It’s really sad. When I was growing up and finding myself, queer literature and any kind of literature like that helped. It makes you feel better to see someone like you, and it makes you feel less alone. It’s really sad thinking that kids might not have that just because of a few angry adults. I know even when things get banned, there’s underground stuff to find, so—

KN: Hopefully it won’t have to come to that.

KN: What can people do to support you, with regards to the program and newspaper?

MP: The ACLU is probably making the most official steps to getting the journalism program back, so just supporting them in any of their efforts and boosting the story. Just spreading awareness and showing your support—anything helps, really.