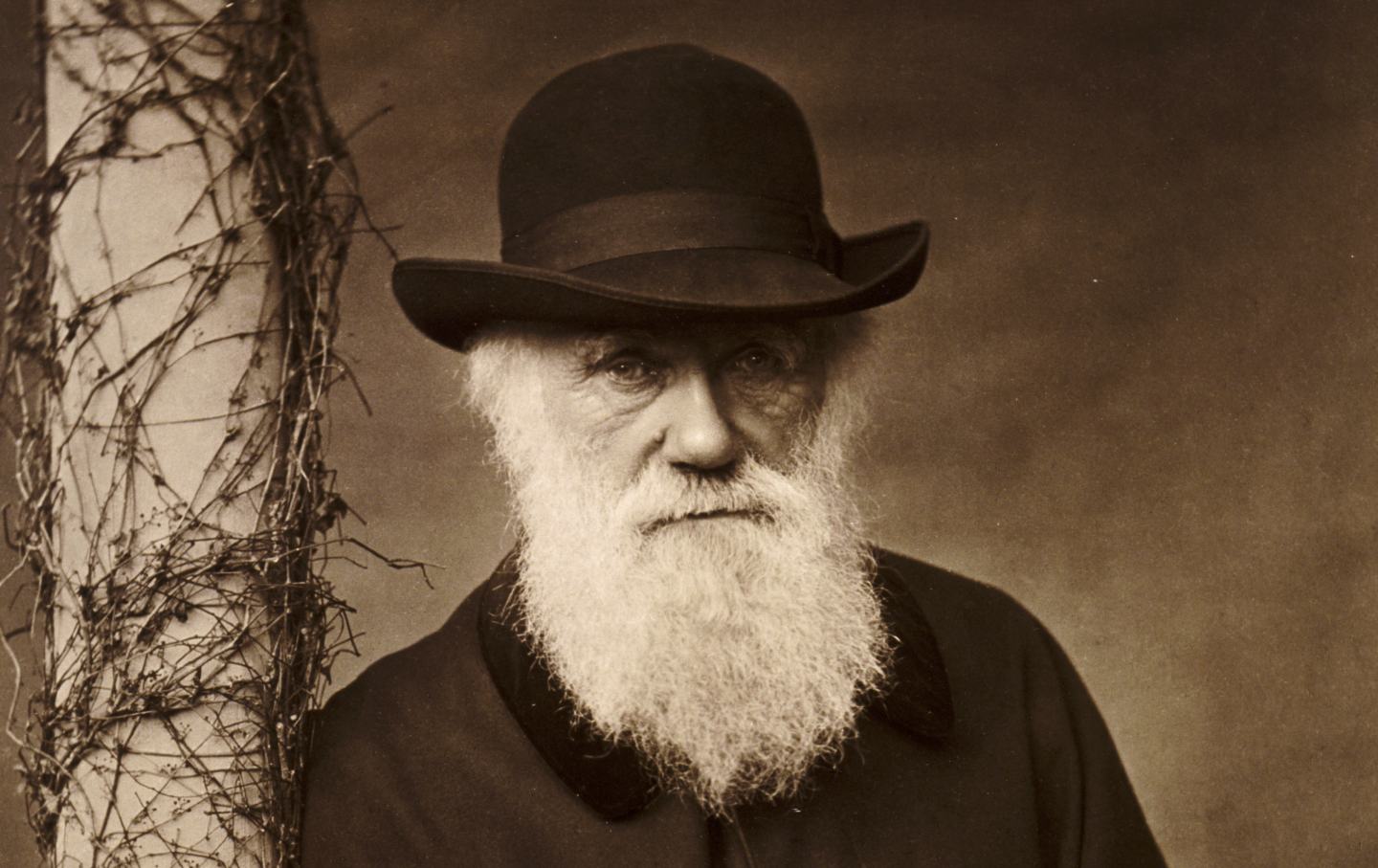 Charles Darwin at his home in Kent, England, in 1880. (English Heritage via Getty Images)

In 1859, Charles Darwin published On the Origin of Species. At the end of the book, there is this wonderful passage about the power of natural selection. Darwin writes: “There is grandeur in this view of life, with its several powers, having been originally breathed into a few forms or into one; and that, whilst this planet has gone cycling on according to the fixed law of gravity, from so simple a beginning endless forms most beautiful and most wonderful have been, and are being, evolved.” The fact that you are reading this now is a product of billions of years of evolution, no small miracle in and of itself.

Darwin wrote these words several years before Louis Pasteur would conduct his experiments across the English Channel in Paris on the germ theory of disease, but all creatures, great and small, operate according to the basic laws of evolution, from the bacteria that caused the puerperal fever that Pasteur first investigated, to the creature (or, rather, more correctly described as a collection of genetic material encased in a protective coat of protein), the virus, that plagues us today: SARS-CoV2.

Organisms evolve by random changes in their genetic makeup as they replicate, whether they can do it on their own, like all living things, or viruses, which straddle the world of the animate and inanimate, and require hosts to parasitize for their own reproduction. What Darwin noted is that the world around us drives evolution in nonrandom ways. The sheer variety of the natural world is driven by adaptations over time to our environments, where those individual organisms with mutations that confer protection against harm or offer a competitive advantage against other individuals of our own kind prosper over the generations.

What we are now seeing with SARSCoV2’s variants emerging around the world is evolution in action. Although SARC0V2 has a proof-reading enzyme—which slows the accumulation of mutations compared to other viruses (e.g., HIV)—over the past year, we’ve seen the virus adapt to its surroundings. All SARSC0V2 wants to do is to find a home, a host, and share the same place with us to reproduce. The B.1.1.7 variant first documented in the United Kingdom is hypothesized to have come from a chronically ill patient, perhaps immunocompromised, where the virus found a home, lingered and replicated happily for longer than it would have in a typical patient, probably in the presence of treatments like convalescent plasma or remdesivir, which would have driven mutations to escape these interventions. Unfortunately, the evolution of the virus within this host ended up conferring another benefit on this viral lineage making it 50–70 percent more infectious than the strains we’ve been dealing with thus far. Other variants are showing reduced susceptibility to neutralization by antibodies raised by some vaccines, which may confer greater lethality in those infected.

So When Can I Get the Covid Vaccine?

None of this is a surprise. Evolution is happening all around us among animals, plants, bacteria, and viruses. But what is clear is that if you want to stop SARSC0V2 and stop the generation of variants—the endless forms most beautiful and most wonderful that Darwin described—you have to eradicate it before it becomes an endemic disease, lingering like the many infections that we’ve tried to outwit and outlast over the centuries.

What is discouraging is that our attempts to address the pandemic have been hyper-local, nationalistic, and mired in short-term thinking and myopia. Depending on where you live in the United States, control efforts are taken more or less seriously. Meanwhile, in Washington, D.C, politicians quibble over what is already a modest pandemic relief package from the virus’s point of view, offering not nearly enough to allow every American to stay at home to protect themselves and their families, ramp up testing and disease surveillance, and get vaccination efforts on track. In fact, I’m already hearing that public health departments are having to choose between vaccination and testing efforts because of staff shortages. Meanwhile, Democratic dinosaurs like Larry Summers think this is 2008 and we are merely having an academic argument about the size of an economic stimulus bill, while Republicans in Congress think we’re spending too much on it all right now. We’re furiously debating who should get $1,400 one-time checks across the country; meanwhile, the virus is being fruitful and multiplying, along with its mutations.

If the US response domestically is still akin to bringing a knife to a gunfight—better than Trump’s mismanagement and chaos, but still not setting us up for containment of the pandemic anytime soon—the global response remains a catastrophe unfolding in plain sight. Right now, the absence of plans to vaccinate people outside of the rich countries of the world is a recipe for disaster. COVAX, the main multilateral initiative on worldwide vaccination for SARSCoV2, said it will be able to vaccinate 27 percent of individuals in poor countries in 2021. The initial estimate was 20 percent. But back to Darwin. What happens with an intervention that cannot eradicate an organism but while in operation lets it generate mutations? Low-level vaccination in poorer countries, along with scarce support for other control measures, risks creating environments for, and selective pressure on, SARSCoV2 to evade the immunogens we develop to prevent serious disease and blunt transmission.

Why is no one screaming bloody murder at this point about this? It’s barbaric in human terms—letting the rest of the world suffer mostly uncontrolled epidemics for the next several years—while Europe, the United States, Canada and other wealthy countries jab up, perhaps requiring vaccine passports for entry by foreigners. But it’s also folly and hubris of the worst kind. Unless we stop SARSCoV2 everywhere, we won’t stop it anywhere. We will be chasing variants across the globe for many years at this rate, all because we cannot raise our heads above the parapets of our own countries to see that all of us are inextricably linked together in viral destiny.

One last thing about evolution. It doesn’t care about us. Modern humans have only been on this planet for about 200,000 years out of the 4 billion of so years of life on earth. It’s all a blink of an eye. We’re just not that important in cosmic terms. To survive against SARSC0V2, against the near-future threats of climate change and whatever else this way comes, humanity is going to have to adapt—and do it quickly. Sadly, we haven’t yet shown ourselves to be up to the task.