Last week, I got to participate in a panel sponsored by the Yale School of Architecture featuring a discussion of the work of the celebrated photographer Camilo José Vergara, particularly his new project The Pandemic Diary, which he describes in this way:1

For the past two years I have been obsessively photographing the city, creating a pandemic diary, documenting the ways in which Covid has changed both our lives and the places we live. I follow people as they go about their daily routines: shopping, working, waiting for the bus, standing in line, entering and exiting subways. I also look at how businesses have adapted, how the government informs people on what to know, what to do, and where to go for help.2

In poring over The Pandemic Diary—a magisterial work of hundreds of pages of text and photographs—what I quickly realized was that this was not my pandemic, especially in that first year, where Camilo showed an evolving streetscape of New Yorkers in poorer communities in the city, out and about in masks, trying to survive a plague as best they could. Meanwhile, many of us stayed home in the early months of Covid-19, ordering groceries and other essential online, while some decamped out of the cities all together. Of course, the “many of us” are the professional class who could opt out of the most dangerous circumstances over the past two and a half years, in the comfort that our class afforded. Camilo’s photographs are for me essentially a tale of two pandemics, in which social and economic class, along with race, are the dividing lines. Of course, we know this as readers of The Nation, but Camilo’s masterpiece made the stark divisions of Covid-19 visible, day after day, in a catalog that had a visceral and profound impact. The Library of Congress is saving all of his photographs. They are a national treasure, as is he.3 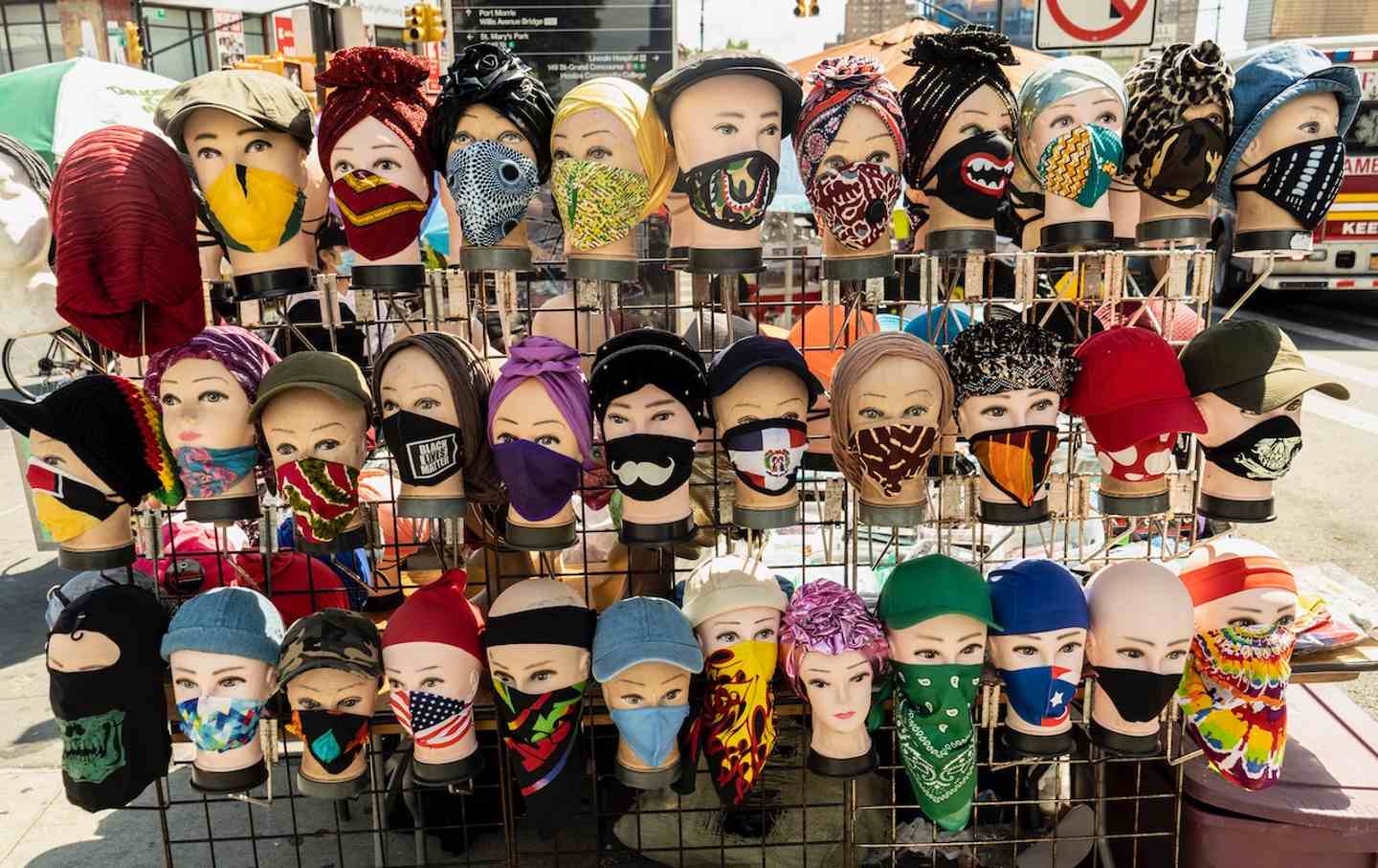 Last week, I also stumbled upon a piece by Keeanga-Yamahtta Taylor in The New Yorker about the debate on learning loss and school closures, which is simply the most brilliant analysis of this matter to date. Like Camilo Vergara, Taylor forces us to recognize what we would like to forget, what we would like to unsee:4

The sudden onset of the pandemic has been the most catastrophic event in recent American history, making the expectation that there would not be something called “learning loss” bizarre. The idea that life would simply churn on in the same way it always has only underscores the extent to which there have been two distinct experiences of the pandemic. One for people who experienced the upheaval but were able to sequester themselves away from its harshest realities, buying groceries online, contemplating buying new houses that could better accommodate working from home, and finding new ways to weather the inconveniences of the isolation imposed by potential sickness. There was another gruesome reality, reaped by poor and working-class families in the surreal numbers of people who have died.5

What is important about Taylor’s analysis is that it centers what has been a mainstream analysis of the learning loss and school closure debate in its real roots in class and in whiteness:6

This, obviously, does not mean that neither set of parents were worried about the concerns of the other, but the priorities reflected different social realities. If you don’t know anyone who has died from the virus, then you may conclude that Covid is not a big deal and that our kids should really be in school. If you know people that have died and been hospitalized, and if the size of your apartment does not allow you to be socially distant from your mother, who lives with you and has Type 2 diabetes, then you may have a different attitude toward sending your child back into a school building.7

Monkeypox Makes It 3 Strikes, and Now We’re Out

All this is to say that our policies on Covid-19—and not just on schools—have largely been based on taking the social realities of the well-off as the neutral, default setting. This perspective still predominates, from the pages of our major newspapers to the centers of power in our cities and towns, the states and the country as a whole.8

At some point, after we stop blaming Donald Trump for our pandemic woes or even focus on the policy failures of the Biden administration, we have to take a look at ourselves—or at least my own demographic: liberal, economically secure, highly educated, privileged professionals—and our role in all this.9

The political scientist Joan Tronto, hits the nail on the head in a recent essay:10

When we care, we do not think of society; we think of our intimates and their concrete and particular needs. In a competitive society, what it means to care well for one’s own children is to make sure that they have a competitive edge against other children. On the most concrete level, while parents may endorse a principle of equality of opportunity in the abstract, their daily activities are most visibly “caring” when they gain special privileges and advantages for their children. Arguments about the value of universal public education and so forth, lose their force when they affect the possibility of our children’s future. This example demonstrates that when care is embedded in another framework of values, it does not necessarily lead in a progressive direction.11

Think of the voices you read weighing in on the learning loss debate, school closures, how the risk of Covid for children was minimized, how the harms of simple mitigation efforts were emphasized far beyond the data to support them. Some of them made performative appeals to equity—how school closures hit Black and brown children the hardest—but rarely featured the voices of Black and brown parents in their commentaries, their prescriptions for what needed to be done, even suggesting that their concerns were misplaced. Even when the data on the views of Black and brown parents is out there in surveys and polls, it gets ignored, discounted. And now that most schools across the nation are open, these voices are nowhere to be found advocating for the changes we need to give all children an equal chance to succeed in this country, in the wake of a pandemic that has devastated their communities. Taylor says, “These are the kinds of people who want to make hay out of test scores but who aren’t actually interested in improving the school conditions for poor and working-class kids—along with liberal critics, who imagine themselves as more concerned about the future of Black children than Black parents while consistently ignoring Black caretakers’ fears.”13

I’ve repeatedly used Martin Luther King Jr.’s and Paul Farmer’s quotes about the white moderate, the white liberal, as a barrier to change in this country in the context of the pandemic. Vegara’s photographs and Taylor’s essays call out this pathology of the white imagination in their work here, implicitly or explicitly naming it.14

Many of those commentators, political figures, even public health experts, who have succeeded in the push for the urgency of their own normal, haven’t been satisfied with their policy victories on the backs of others. No, they are desperate to position themselves as champions for equity, to shut down any notion that, well, they are simply champions for their own class, their own race. They want to declare victory on behalf of those they left behind. The lovefest between White House Chief of Staff Ron Klain, Covid czar Ashish Jha, and The New York Times’ David Leonhardt is a case in point.15

How the United States Fails the Chronically Ill

The Human Costs of the Fed’s War on Inflation

“You Strike So You Don’t Quit”: Across the Country, Nurses Are Fighting Overwork

In a recent piece in The New England Journal of Medicine, Sandro Galea, dean of the Boston University School of Public Health, suggested that now, since the early crisis phase of the pandemic is over (whose pandemic, I might ask, is over?), the primary objective of public health institutions and experts “should be to provide data and decision-making frameworks that local partners can use in diverse contexts to weigh various trade-offs.” This is a call to a studied neutrality, which only serves those who have the power to frame the trade-offs, and in which, as I just noted, the social realities of the well-off will be taken as the neutral, default setting.16

As Desmond Tutu once said: “If an elephant has its foot on the tail of a mouse, and you say that you are neutral, the mouse will not appreciate your neutrality.” We’ve heard again and again over the course of this pandemic that public health shouldn’t be political. But this is a fundamental misunderstanding of public health—which is not just a technical discipline, offering data and decision-making frameworks, but carries with it a commitment to addressing the needs of those most in need, the most vulnerable, the most at-risk. Public health is not about trickle-down, with benefits given to those with means and privilege flowing down, eventually, to all—because we know that doesn’t happen. To sit back and watch, even to offer data sets and statistical analyses is not enough; this technical aspect of our work may be necessary, but it is not sufficient to lift all of us up. As Ed Yong wrote in The Atlantic:17

There was a time, at the start of the 20th century, when the field of public health was stronger and more ambitious. A mixed group of physicians, scientists, industrialists, and social activists all saw themselves “as part of this giant social-reform effort that was going to transform the health of the nation,” David Rosner, a public-health historian at Columbia University, told me. They were united by a simple yet radical notion: that some people were more susceptible to disease because of social problems. And they worked to address those foundational ills—dilapidated neighborhoods, crowded housing, unsafe working conditions, poor sanitation—with a “moral certainty regarding the need to act.”18

We’ve got to rediscover our roots, not shy away from the struggle—and this goes far beyond Covid-19. In America, this means confronting race and class and how our lives, our policies and programs are decidedly not neutral, and will almost always prioritize those with privilege, even as these decisions are framed as the centrist, moderate—even liberal—choice.19