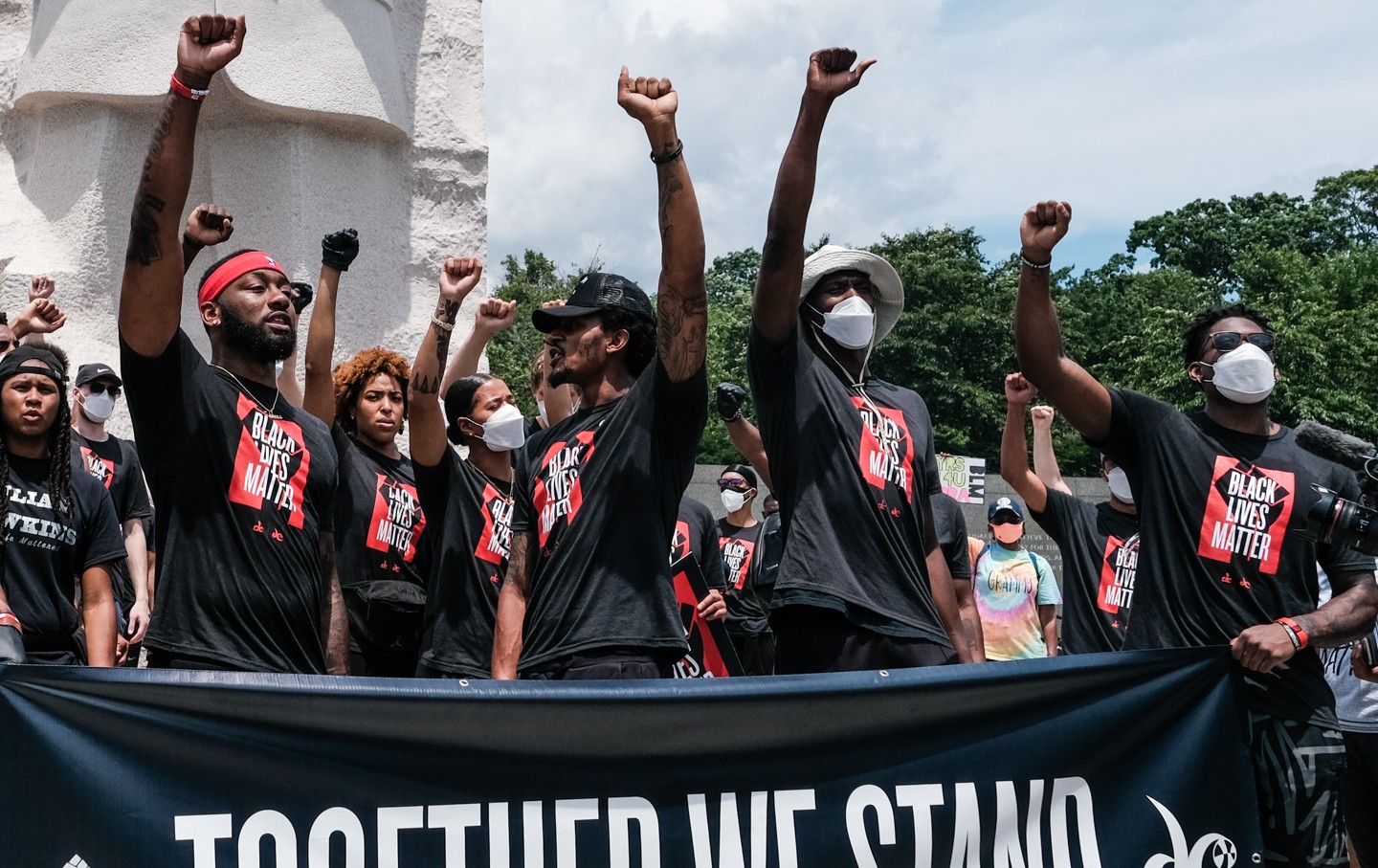 Members of the Washington Wizards and Washington Mystics basketball teams rally at the MLK Memorial on June 19, 2020, in Washington, D.C. (Michael A. McCoy / Getty)

On Juneteenth, two young Black men led a demonstration down the streets of Washington, D.C., megaphones in hand, chanting that Black Lives Matter, and that without justice, there would be no peace. This has become a familiar sight in the nation’s capital over the last month, since the police murder of George Floyd.

Less familiar were the two people leading the charge. Their names are John Wall and Bradley Beal, and they make up the All-Star backcourt for the NBA’s Washington Wizards. In an example of a remarkable recent development at the intersection of sports and politics, Beal spoke out at the rally. He recalled an interaction with local police that he had in 2018.

“Two years ago, I got pulled over on 495 [the D.C. Beltway] and the officer asked me to step out of the vehicle. We are literally on the side of the highway. My wife, me, and one of my friends. The officer comes up to me and says, ‘What if I fuck up your Monday, and put you in a headline and arrest you right now?’”

We’ve become used to seeing athletes, particularly Black athletes, over the last decade using their platform to amplify messages of protest and dissent. We’ve also been used to an athlete’s using the field or court as a legitimate site of protest during the national anthem, taking a knee or raising a fist in silent protest. But seeing athletes themselves take to the streets recalls a previous political period. As sports historian professor Louis Moore—author of the utterly indispensable book, We Will Win the Day—said to me, “What’s different today is the numbers.

“Wall and Beal fit in a tradition of athletes, like 1960 Olympic hero Wilma Rudolph, for example. She was arrested in 1963 for taking part in a sit-in. Or Bill Russell, who helped lead protests in 1963, while Jackie Robinson and Floyd Robinson went to Birmingham. But what’s different today is the amount of athletes we see. It’s all over, seemingly in every major city. My guess is that we can count on hands how many pros in the past were marching on the front lines. Jackie wanted more, and in today’s players, we’re getting more.”

Times have certainly changed. In the late 1960s, when the protests turned to urban rebellions, particularly after Dr. Martin Luther King Jr.’s assassination in 1968, it was more common to see Black athletes used to try to quell protests. On college campuses, as detailed in the book Sports Wars: Athletes in the Age of Aquarius, by David Zang, which I highly recommend, “athletes, particularly the football team, were often used to harass anti-war activists and even form picket lines to keep food and supplies out of buildings being occupied by demonstrators.”

The contrast between that scene and seeing Black college athletes today, particularly football players at powerhouse schools like Texas and USC, making anti-racist demands of their school, and also taking the time to hit the streets and protest, is a generational shift and a statement about consciousness in 2020 that cannot be ignored. Then there is Kansas State, where athletes are refusing to play unless the school deals with a prominent racist student who tweeted something vile about George Floyd.

If one person could be credited for a catalyst for bringing athletes into the struggle, that would be former NBA player Stephen Jackson. Captain Jack, as he is known, was friends with George Floyd—looking so similar to one another that their mutual nickname was “Twin.” Jackson has openly opposed reopening of the NBA season, calling it a distraction from the struggle, saying, “None of these white owners are speaking up. None of them are taking a stand. Playing basketball ain’t going to do nothing but make them money and take the attention away from what we’re fighting for.”

Jackson is drawing current and retired NBA and WNBA players into the struggle, on a street level, having a rally, in just one example, with former NBA player Rasheed Wallace. Jackson has made clear that this isn’t just about George Floyd, posting constantly about other cases, most notably that of Breonna Taylor in Louisville, promising to go to Muhammad Ali’s birthplace and bring protesting players with him.

In addition to Jackson and the NBA players, many women athletes are in the streets. Coco Gauff, the 16-year old American tennis star, spoke at a protest in her hometown of Delray Beach, Fla., last week. She said, “I think it’s sad that I’m here protesting the same thing that my grandmother did, 50-plus years ago. So I’m here to tell you guys that we must first love each other, no matter what. We must have the tough conversations with our friends. I’ve been spending all week having tough conversations, trying to educate my non-Black friends on how they can help the movement.”

If one thing bonds all of these athletes, it is the fact that they are not there merely because of George Floyd, Ahmaud Arbery, or Breonna Taylor. It’s because, like Bradley Beal, they or their family members have experienced their own run-ins with police that have either turned violent or existed on a knife’s edge, where tragedy and yet another hashtag could’ve been on the agenda. Being a star athlete hasn’t protected them. In some cases, like with Beal, it seems to have made them the target.

That’s why today’s athletes are part of the anger we see breaking out across the country. Athletes are following the will of the streets, which allows them to use their stature to puncture privilege, and forcefully tell white sports fans that this is no longer a game.