Kathy Hochul, governor of New York, stunned advocates last year when she issued only one commutation of the 450 applications she had received. (Anthony Behar / Sipa / Bloomberg)

All Nikki Addimando’s two children want for Christmas is their mother.

Instead, for the past six Decembers, they get her call from prison. If they’re lucky, it will be 30 minutes; if not, their Christmas together will last only 15 minutes before the prison cuts off the call.

In 2019, Nikki Addimando, a Poughkeepsie mother of two, went to trial on second-degree (or intentional) murder charges in the 2017 shooting death of her boyfriend Christopher Grover. During her trial, she testified for three days about Grover’s four years of violence against her, including sexual assault, beatings, burnings, and repeated death threats. Multiple witnesses also testified about her many injuries, including black eyes, bruises, and burn marks.

Nonetheless, a jury convicted her. Judge Edward McLoughlin ruled that she did not qualify for a reduced sentence under the Domestic Violence Survivors Justice Act, a law permitting a shorter prison sentence if abuse played a significant factor in the crime. He stated that, while he believed she had been abused, she had not proven that it was at the hands of Grover. He sentenced her to 19 years to life in prison. 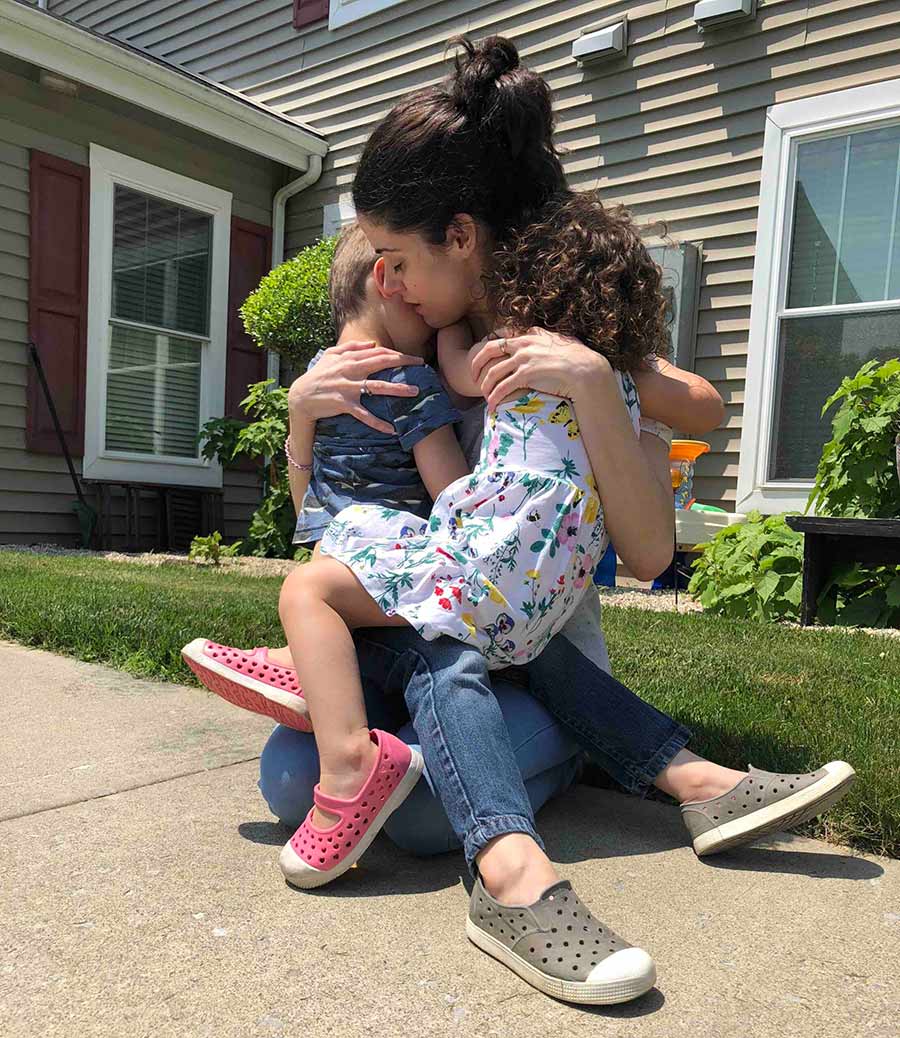 Nikki Addimando was released from jail on a writ of habeas corpus in June 2018 and reunited with her children, whom she had not seen in nearly nine months. (Photo by Michelle Horton)

Addimando appealed and, in 2021, the state appellate court ruled that Grover’s abuse had played a significant cause and amended her sentence to seven and a half years. While the four judges’ ruling shaved nearly 10 years off Addimando’s minimum sentence and removed the “to life” portion, it still means that she will not be able to tuck her children into bed until at least 2024.

This week, the 34-year-old mother and her family are fervently hoping Governor Kathy Hochul will grant her clemency.

Under New York’s Constitution, the governor has the power to issue clemency, either in the form of a commutation, or a lessening of a prison sentence, or a pardon, typically given after one is released from prison. In New York, the governor often announces clemency just before the December holidays, transforming the constitutional power into an act of Christmas compassion.

According to Hochul’s office, 780 petitions for commutation currently await her decision. The office does not track petitions by gender identity, so it’s impossible to say how many are from women, much less how many are from abuse survivors (of any gender) who were ensnared by the legal system.

Hochul has spoken publicly about her family’s experiences with domestic violence, including how it moved her own mother, at age 70, to open a transitional shelter for survivors. This past October, Hochul reiterated that family connection when she signed a five-bill package of laws strengthening protections for abuse survivors.

Last October, when asked if she would give special consideration to commuting sentences of imprisoned abuse survivors, Hochul’s office told The Nation, “Governor Hochul is committed to supporting and delivering justice to survivors of domestic violence, and we will work with advocates and impacted communities to address these concerns.” But just before Christmas, Hochul stunned advocates when she issued only one commutation of the 450 applications she had received.

This year, Hochul has 861 petitions for commutation (and another 450 for pardons) awaiting her decision.

Until recently, Tracy McCarter was facing a similar situation as Addimando. As I reported previously, McCarter was arrested in March 2020 for the death of her estranged and abusive husband. The Manhattan assistant district attorney (ADA) charged her with second-degree murder, the same charge that Putnam County ADA Krauss had leveled against Addimando in 2017. For nearly three years, McCarter remained in legal limbo, with brief glimmers of hope that the incoming district attorney would dismiss the charge. Her family, legal team, and advocates with Survived and Punished continued pushing for the charge to be dismissed and, in late November, they succeeded.

Now that she no longer faces a murder charge, McCarter is adding her voice to the chorus urging Hochul to grant clemency to Addimando.

“The criminal legal system, in the attempt to make a case at any cost, will deny evidence of abuse and justification,” McCarter told The Nation. “The system and all its actors—prosecutors, judges, jailers—then go on to replicate that abuse. Governor Hochul should recognize this. With the stroke of a pen, she could return Nikki to her family and community and end her unjust punishment. It is what Hochul promised when she ran for office and was elected by the people who expect her to follow through on those promises to us.”

In response to queries about Addimando’s application, Hochul’s office wrote, “While we cannot comment on pending clemency applications as the process is confidential, Governor Hochul is committed to improving justice, fairness, and safety in the criminal justice system, and we are reviewing applications in that context.”

Addimando’s sister, Michelle Horton, has been caring for Addimando’s two children since her sister’s arrest. If she could speak directly to Hochul, she would tell her about all the ways in which Addimando’s incarceration has impacted the children, noting, “None of us can start healing until she comes home.”

Addimando’s son will be turning 10 on New Year’s Eve. For years, Horton told The Nation, he had one birthday wish. “I just want her here on my 10th birthday,” he told his aunt, Horton said.

Now, she says, he seems to be giving up hope that his mother will come home early. As his birthday approaches, the boy has been steeling himself for the possibility that his mother might not see him blow out the candles this year. “Well, 11 is my favorite number,” he recently told his aunt.