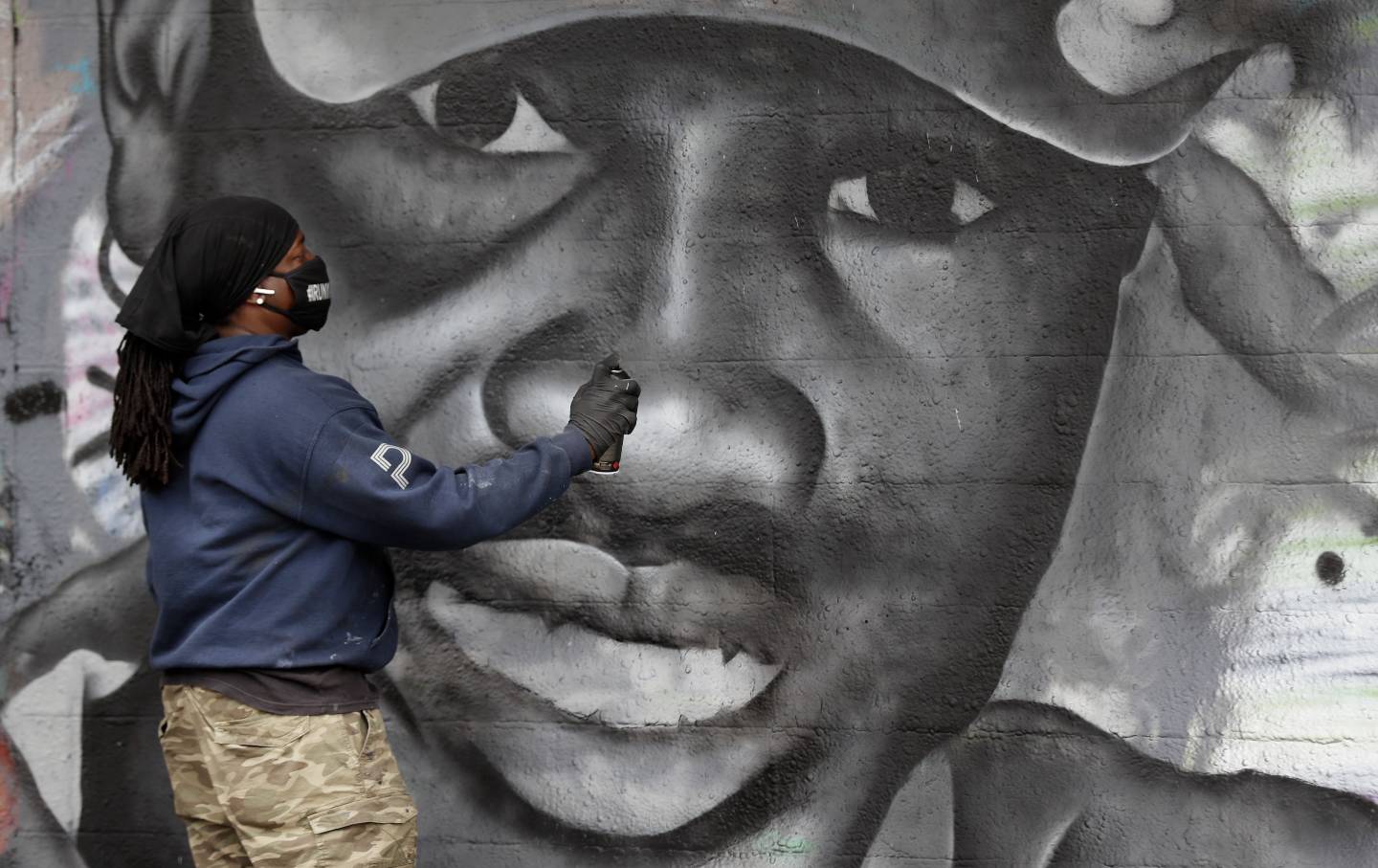 By now, there is no need to recount the details here. It is a fair enough summation to write that three months ago, Ahmaud Arbery, a black 25-year-old, was hunted and summarily executed by white gunmen while jogging near Brunswick, Ga. Despite his killer having literal blood on his hands when officers arrived at the scene, the state ruled that Arbery’s murder was not worth inconveniencing his assailants’ lives with either arrest or prosecution. In the instant they grabbed guns, put together a posse, and pursued him, Arbery’s white killers demonstrated their confidence that white American indifference to black death grants them power, impunity, and above all, liberty.

Which is to say, white American freedom. That ideal has always been a sinister thing, rooted in the notion that whiteness is endowed with the inalienable right to control black bodies and determine black destinies. As a policy tradition—historically spelled out in the actual letter of American law and still visible in how the laws are unequally applied—it is one of this country’s foundational beliefs. White American freedom relies on the use of terror and violence (and very often, gun violence) when it perceives even the mere reality of black existence as a threat to white authority and comfort.

Both Arbery’s killers and Georgia state authorities exercised white freedom at every turn. His murderers saw themselves as free white men and, as such, duly entitled to police the movements, motivations, and ultimately, the right to exist of a black stranger. District Attorney George E. Barnhill, whose son previously worked with one of the killers, wrote a letter of recusal that amounted to an indictment—of Arbery. In it, Barnhill wrote that he and senior trial lawyers “do not see grounds” to arrest the murderers, effectively attributing Arbery’s killing to his having entered “their neighborhood” and then ignoring the shouts from armed white men “telling him to stop.”

Alan Tucker, the Georgia lawyer and acquaintance of the gunmen who leaked footage of the killing, once again putting black death into viral, heavy rotation, essentially blamed Arbery for his own murder, stating “if he had just frozen”—meaning halted and deferred to white freedom’s right to question him—“he wouldn’t have got shot.” That sentiment is echoed by the tens of thousands who signed on to the GoFundMe accounts or joined Facebook groups dedicated to supporting Arbery’s killers. Like every episode of black death that garners even the mildest critiques of those who carried out the murders, Arbery’s killing has attracted a wide and vocal audience who make their advocacy for the tenets of white freedom known.

White freedom’s inextricable link to black subjugation is woven into the fibers of American history, from all-white colonial militia patrols to keep black enslaved people in line to the unknowable thousands of post-Reconstruction lynchings that served to blare the consequences of black freedom mistaking itself for true American citizenship. The Red Summer of 1919—a bloody period of white mob terror and what historian Bill Tuttle identifies as black “ethnic cleansing” across 25 American cities—was the response when black civil rights efforts threatened white Americans’ mythologies about their own innate racial superiority. The white terrorism of Jim Crow, like mass incarceration and extrajudicial police violence, is a continuous thread that affirms the steadfast endurance of white freedom. The mode of lynching black folks may change with the technology of the times, but the product is always the same old black death.

Black Trans Lives Must Be Front and Center

The Violence Didn’t Start With the Protests

White freedom is on full display by the overwhelmingly white protesters of stay-at-home orders around the country, in demonstrations that proliferated after reports of Covid-19’s black death tolls racialized the disease. It is not incidental that those defenders of white freedom have likened orders to remain at home to stem the spread of a deadly virus to the brutality of slavery while insisting that the ranks of disproportionately black and brown service workers already dying of the disease get back to making their lives comfortable.

Nor is it insignificant that they have openly carried firearms as they stormed statehouses—an open threat to anyone who would suggest that the rule of law might apply to them. (The fact that protesters yelling insults into the faces of police and carrying weapons hasn’t left a single white protester dead proves that the white freedom they’re fighting for has been with them all along.) If they were black and protesting the killings of black folks, these scenes would be described as riots. Instead, Donald Trump’s economic adviser Stephen Moore equated those white protesters with black civil rights workers, calling them “the modern-day Rosa Parks,” a gesture meant to inflame but also to signal that the fight for white freedom is patriotic. Trump, whose presidency and administration have been one long exercise in white freedom, tweeted they should “LIBERATE MINNESOTA,” “LIBERATE MICHIGAN,” and “LIBERATE VIRGINIA.” Meanwhile, black folks are being arrested and even shot for not social distancing.

On May 3, a black North Carolina woman and her son were besieged in their home by a mob of 15 angry white men, one reportedly carrying an assault weapon and another holding a shotgun. In the group was a sheriff’s deputy who, when told he had the wrong house, blocked the doorway with his foot and demanded to enter, according to the family’s lawyer. Law enforcement officers who initially responded to the scene made little effort to investigate the incident, which didn’t end in violence but certainly could have. The officers didn’t cite white freedom as their excuse for doing nothing in response to an armed vigilante group terrorizing a black family.

They didn’t have to.