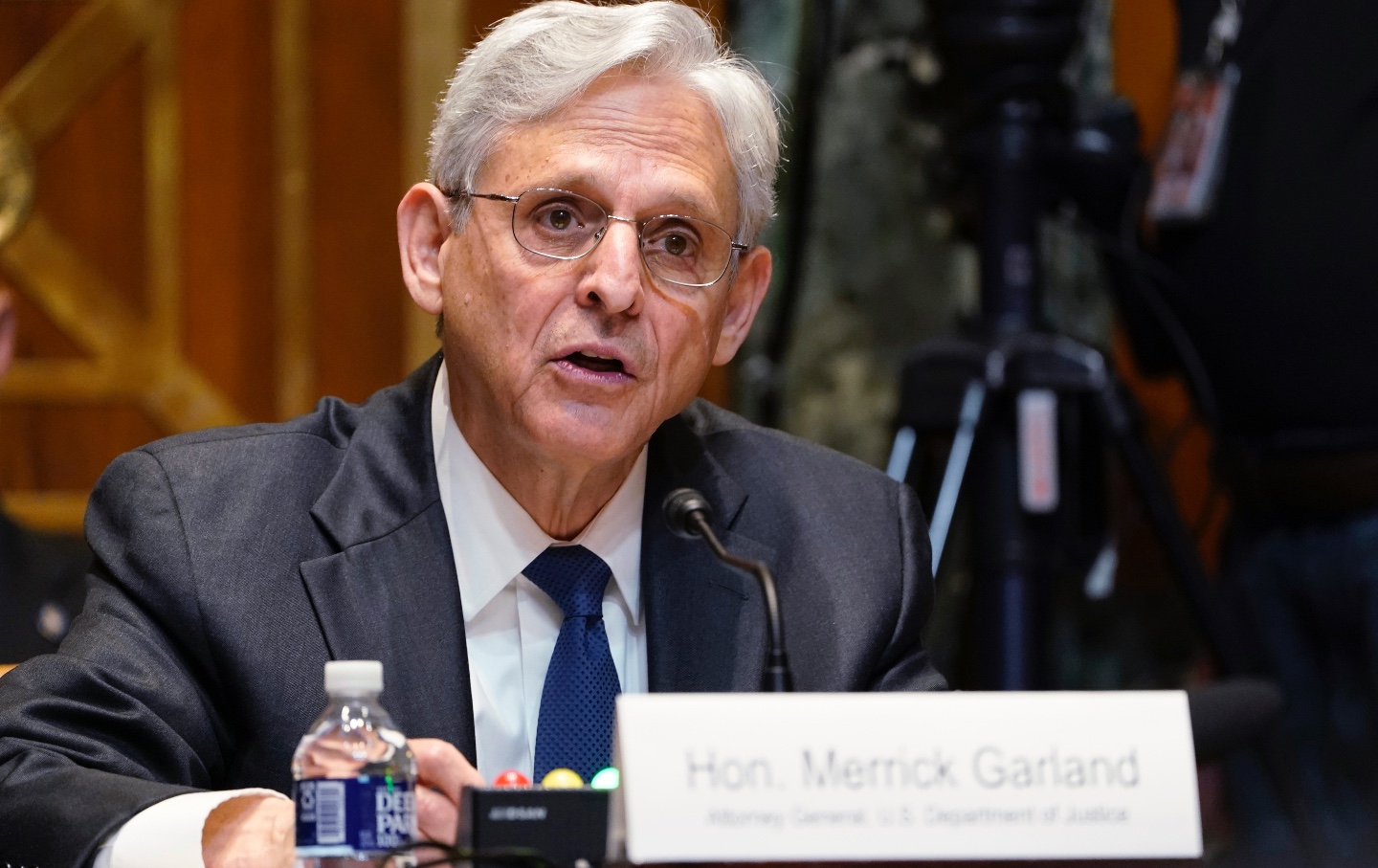 I can’t believe I have to write this, but: Slandering alleged rape victims is not one of the official duties of the president of the United States. This is apparently a confusing and controversial proposition to some. But rest assured, there is nothing in Article II of the US Constitution, and nothing in any part of the US statutory code, not even the footnotes, that lists “defaming alleged rape victims” as one of the privileges or responsibilities of the office of the president. We could, and in fact do, have a fully functioning Executive Branch without granting civil immunity to presidents who decide to call rape victims “ugly” “liars” in their personal capacity as edgelord bully on Twitter.

Unfortunately, some of the people who are making that bad choice are very powerful.

This week, Merrick Garland’s Department of Justice announced that it would continue defending Donald Trump in his ongoing attempts to dodge rape allegations by E. Jean Carroll. Carroll claims that Trump raped her in a department store in the mid-1990s. Trump claims that Carroll is “ugly” and “not [his] type.” Carroll sued Trump for defamation for these comments (Trump is also facing another defamation lawsuit from Summer Zervos, whom Trump also slandered after she accused him of sexual assault), but Bill Barr’s Justice Department sought to intervene on Trump’s behalf. Barr argued that Trump was a federal employee whose statements were part of his employment duties and who was thus entitled to protection under the Westfall Act, which grants civil immunity to federal employees for actions that are part of their jobs.

Barr’s argument has already been rejected by a district court—again, because defaming alleged rape victims is not really a part of anybody’s “job.” But Garland’s DOJ decided to take up Barr’s position and continue appealing the case to the US Court of Appeals for the Second Circuit.

It’s important to understand that the DOJ did not have to do this. There is no legal requirement that the current Justice Department has to continue to advance bad arguments made by the previous Justice Department. The DOJ is supposed to represent the people of the United States. There is no good argument for why our tax dollars are being used to argue that Trump is immune from a lawsuit related to a rape he allegedly perpetrated before taking office and the lies he may have told about that rape while in office. The same would be true of Joe Biden or Barack Obama or any future president who finds themselves accused of defaming alleged rape victims. It’s entirely possible to live in a country where the president needs to hire his own lawyers when he’s accused of rape or lying about rape.

Trump is entitled to a legal defense for these charges, but Garland is not offering a defense. He’s offering absolute immunity from these charges and is willing to offer it on the taxpayers’ dime. That’s simply unnecessary. Trump is well capable of paying for (or misappropriating charitable contributions for) his own defense. There are plenty of lawyers who’d take the work.

Reaching the opposite conclusion—that defaming alleged rape victims is so fundamental to the ability of presidents to perform their duties that the Justice Department must argue for their absolute immunity from the charges—requires jumping on some Penrose stairs and never thinking beyond their never-ending loop. Unfortunately, many DOJ supporters and otherwise reasonable legal commentators are willing to accept the closed institutional logic of Barr and Garland that seems to value defense of the presidency above all else.

Trump’s best case is fairly straightforward: His allegedly defamatory conduct is like other allegedly defamatory conduct committed by other federal employees whom courts have already granted absolute immunity from such charges. There are a few cases here that work in Trump’s favor. In Wuterich v. Murtha, the D.C. Circuit appeals court ruled that Representative John Murtha could not be sued for defamation after making disparaging remarks about US soldiers involved in the Haditha Massacre during the war in Iraq. In another case, Council on American Islamic Relations v. Ballenger, Representative Case Ballenger made allegedly defamatory comments about Muslims while on the phone with a reporter who was asking about his failed marriage. Again, the D.C. Circuit ruled that the congressman was immune from liability.

Any lawyer advertising on a subway poster can make that argument for Trump. The problem is that the Trump situation is not a point-and-click application of these precedents. (I can also make the argument that both of those cases were wrongly decided, especially Ballenger: If talking to reporters were a required part of Congress’s job, I could make Joe Manchin respond to my e-mails. But that’s not at issue here.)

The issue here is that criticizing US soldiers who arguably committed a war crime from one’s perch as a representative of that government (the Murtha case) is objectively different from slagging off a woman who claims you raped her. Murtha and Ballenger were not defaming people who had accused them of a crime, and the court’s decision to extend them immunity, even wrongly, was not part of a gambit to cut off investigation of or accountability for that crime.

That’s an argument E. Jean Carroll’s lawyer (the fierce Roberta Kaplan) is fully capable of making in court. What the rest of us should be doing is questioning why the DOJ is opposing Carroll’s case in the first place. Even if you agree with the above precedents and think defaming women who were allegedly raped is a presidential prerogative, the Department of Justice is not bound by those cases. Precedents bind courts (unless you allow conservatives on your court, in which case precedents aren’t worth a damn). But the DOJ is not a court. It is an executive agency whose constituents are the American people, not just the president. If the DOJ is going to support an interpretation of law, or if it’s going to try to extend a legal interpretation into an uncharted area, it better have a good reason for why its interpretation advances the cause of justice or fairness or equality—or something—“for all.”

In this case, Garland and his defenders have no such reason. A world in which presidents are immune, both criminally and civilly, for everything they do while in office is not a good or just one—and it’s certainly not one that can be sustained under a republican form of government. Sure, we don’t want presidents to be sued by QAnon people who write lawsuits by cutting out letters from magazine articles. Sure, we also don’t want run-of-the-mill federal employees catching a lawsuit every time they do “big government” in a way that pisses off some dude hoarding canned beans in his doomsday bunker. But there simply must be some measure of conduct that is illegal even if the president does it, and drawing the line at defaming women who accuse presidents of rape seems as good a place to start as any. I’d also argue that shooting people on Fifth Avenue should not be defended by the Justice Department, for what it’s worth.

Garland’s DOJ evidently disagrees. This is now the third decision in which his DOJ has decided to support the bad arguments and unjust legal maneuvers enacted by Barr’s DOJ: It decided to defend Barr’s lies about the Mueller report; it asked a judge to throw out lawsuits against Trump and Barr for gassing peaceful protesters so Trump could take a photo with a Bible; and now this. None of these decisions are required by law. None are particularly good. None reflect the will of the people who voted against the Trumpian policies of lies and cruelty.

Why Is Merrick Garland’s DOJ Carrying Water for Bill Barr?

But all of them are motivated by the misguided belief that institutional continuity is more important than seeking actually just outcomes.

Garland was asked about Carroll’s defamation suit in a Senate hearing on Wednesday. His main argument for continuing the case was that, while he himself would not have taken some of Barr’s positions, his hands were magically tied: “Sometimes we have to make decisions about the law that we would never have made and that we strongly disagree with as a matter of policy.”

That is not justice. That is bullshit. If Garland disagrees with the policy of defaming alleged rape victims, all he has to do is stop defending it. The fact that he won’t stop is a problem with him and his department, not the law.