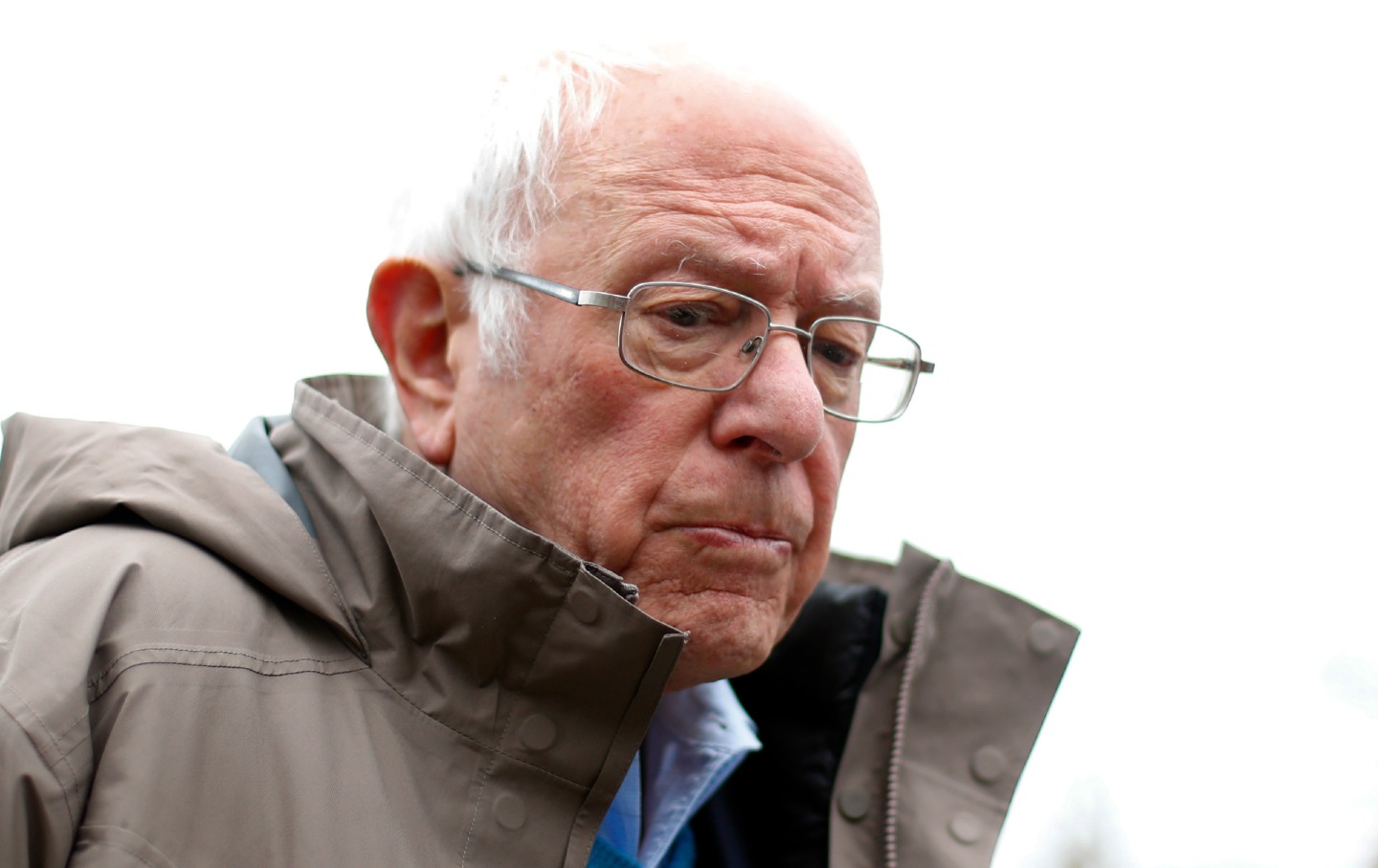 The last time leaders of the national Democratic Party coalesced around the safe and electable candidate they gave the United States to Donald Trump. Listening to current party leaders and pundits talk about Biden versus Sanders, it’s hard to avoid feeling like we’re heading for a repeat of 2016, leading to another disaster in November (with even more serious repercussions).

I am not and never have been a Bernie Bro, but it is urgent we understand why Sanders is a far better choice than Biden in the general election—and that Sanders still has a real shot at winning the nomination. This entire race can swing back to Sanders as fast as it swung to Biden. The coronavirus underscores how fast things change, and why a universal, national health care plan is far superior to maintaining a system of for-profit private insurance that is totally unfit for global pandemics, let alone ordinary health care crises.

When thinking about electability, there’s a huge difference between the primary and the general election. Biden is as much a Dem-Party Bro as can be, which sets him up well for the primary. He’s got the entire Democratic Party establishment backing him. But what works in a primary might not be so effective in general election swing states—or with voters deeply cynical about party insiders. Sanders, by contrast, is the perfect mix of outsider and hell-raiser needed for the general election, where, if we look at 2016 in America—and also election patterns across Europe too—outsider status, someone “different than the status quo,” is what’s winning.

The strength of Sanders is that he is pure on the key wedge issues that are the ultimate concerns of the voters desperately needed to defeat Trump in November. And he is more trusted by the voters who are skeptical of party insiders. If trust were the only thing Sanders had going for him, it would not be sufficient, but he has way more going for him, especially up against Trump.

While the liberal media and the pundit class—backed by huge Wall Street donations and especially the health care industrial complex—are attempting to anoint their class warrior, Biden, Trump will pulverize Biden in Pennsylvania, Michigan, Ohio, and Wisconsin in the general election by running to the left of Biden on global trade agreements (that have decimated good union jobs). Likewise, the most effervescent and activist base of the union movement is among America’s teachers, and Biden is deeply implicated in eight years of Arne Duncan, who as secretary of education was anti–teacher union and enthusiastically pro–charter schools and privatization. Sanders excites the hell out of teachers; Biden depresses them. Which is why some of the biggest teachers union locals endorsed Sanders.

This doesn’t mean those people will vote Trump, but it does mean some of them will sit out the election—whether or not we like it or agree with them—as we saw in 2016. Obviously, Biden is getting the more conservative Democrats, such as those in South Carolina, Alabama, Arkansas, Texas, Mississippi, and Missouri. But those states don’t matter in Electoral College general election math, since all of them will go red in November.

Biden’s debate skills have been poor, better only than Mike Bloomberg’s. We have yet to see a debate between Biden and Sanders, which is urgent and should be bumped up immediately, before the next set of states vote, so the electorate can assess who stands a better chance in a debate against Trump. You might argue that it doesn’t matter what Trump says, because he is obviously worse than Biden on everything—but that is flat wrong. Trump’s base holds steady at 44 percent approval, and they don’t care if he lies, is a sexist pig, or much else.

However, the Democratic base and the independents we need to defeat him—and the voters who swung from Obama to Trump—all do matter enormously, and they simply won’t be persuaded by a traditional, Wall Street–backed, establishment candidacy. Running to “heal America” or “restore morality” isn’t going to work for Joe Biden, because too many contradictions will surface to undermine that: his public comments and/or policy votes about Social Security, Anita Hill, incarcerating black youth, to name a few. Trump will be judged by his core base differently than swing and independent voters will judge his challenger.

Keeping our attention on general election voters, who are very different from primary voters, and on the states that matter most (not the ones Biden picked up on Super Tuesday, nor Big Tuesday), the best if not only candidate who can both pull swing votes from Trump and pick up new voters, the Latinx vote, and an army of 30-year-olds and under, is Sanders (in Michigan, Sanders won 69 percent of the under 45-year-olds who voted last night). Not that it in any way justifies taking them or their issues for granted, but African Americans will likely support anyone against Trump in equal numbers on election day—they are the saviors of the Democratic base—and they are experienced, committed voters (who are often then disregarded by the people they help elect). The Latinx vote is huge, but new and less experienced in voting. As a bloc to be organized, as best seen in Nevada, they are extremely important and are considerably more motivated by Sanders then Biden, which matters a great deal in November. Biden is linked to Obama and Clinton on immigration; Sanders is not, which is part of why he is winning overwhelmingly among Latinx voters.

Same for the youth vote, which is perpetually hard to lasso. Think of the Sunrise youth, motivated by a future of extreme storms and an extremely bad economy. They are less good at insider-baseball primary campaigns, but the general election will be different. We need to recognize that people who vote in primaries are not the same as those who turn out in general elections.

A long career as a union organizer who has helped workers overcome incredibly stiff odds in many hard-to-win National Labor Relations Board elections has given me some insight into the Trump strategy, because it is identical to the methods and techniques deployed by anti-union consultants: drive doubt, suspicion, division, fear, hate, and, above all else, use every mechanism of voter suppression—especially damping down turnout on election day—available. This union buster–Trump playbook can be overcome only by a candidate who will raise people’s expectations that they and their family deserve and can obtain a better life, and who has the capacity to counter wedge against Trump on key issues. With no special affection for either of the older white men this contest has come down to—I’d like the chance to vote for a younger, unionized, working-class woman of color, to be clear—I also know that it’s imperative we understand why Joe Biden is a repeat of Hillary Clinton and thus will likely lose in November.

Examining voting patterns and exit polling to date, the majority of Americans wants free college tuition, universal health care (despite all the scare mongering around “choice”), and is deeply concerned about climate change. Don’t forget that a little over a week ago, 57 percent of Texans polled on Super Tuesday said they are favorably inclined toward socialism. It’s Bernie Sanders who has raised the expectation of young voters, including African Americans, and Latinx voters—very important constituencies from a ground troops perspective—as well as broad swaths of voters that Americans deserve way more than simply defeating Trump. We deserve—and can have—a far better quality of life if we distribute the economic pie more fairly. Ordinary people want a fighter, not a healer.

There’s too much at stake to let the establishment Democrats lead us down the road of failure by selling Biden as safe. He’s not. Surprise tornados are ripping through Tennessee, and there wasn’t a drop of rain in California in February (dry weather will bring greater fires than ever, sooner, during the fall election season); climate change is as immediate as COVID-19 feels—but more devastating. The conservative-stacked Supreme Court is just getting started undoing 80 years of settled law. It will move toward abolishing all collective bargaining, turning the nation into Wisconsin. It will cement corporate personhood in voting and enable even greater voter suppression and gerrymandering. Only one candidate can peel the needed votes from Trump and generate the high level of enthusiasm needed in November: Bernie Sanders.