In light of Arizona Senator Kyrsten Sinema’s actions repeatedly obstructing progress on policies that would foster greater economic, and racial justice, momentum is gathering for an effort to back a Democratic challenge to her in the 2024 primary when she comes up for reelection. Key state leaders and groups including Living United for Change in Arizona (LUCHA) have launched PrimarySinema, an effort to lay the foundation now for defeating her in 2024. Such an effort makes eminent sense for several political, policy, and moral reasons.

The first reason to primary Sinema is that she’s bad at math. As Willie Brown, former San Francisco mayor and the longest-serving speaker of the California Assembly in history, said after defeating a plot by renegade Democrats to try to topple him from the speakership in 1988, “the first law of politics is you have to learn to count.” Kyrsten Sinema can’t count.

How Did Arizona Turn Purple—and What’s Next?

Deepak Bhargava, former president of the Center for Community Change and a leading immigration reform leader in the country, shared his experience with her in a recent edition of his newsletter The Platypus. Bhargava and Sinema had bonded in the early 2000s when she was “a strong ally to immigrants under siege from a crazy state legislature and armed militias who roamed around (and crashed our meetings) with impunity.… she was sometimes the only white person to be seen at them.” Bhargava enthusiastically supported her first congressional run in 2012, but then expressed dismay at her anti-immigrant votes during her first term. When he challenged her on it, she explained, “I gotta do what I gotta do.”

What Sinema thought she “gotta do” was appeal to white moderates in order to win elections, and, in a manifestation of how she is as bad at math as she is at loyalty, she mistakenly thinks that that is how she won her 2018 Senate race. But she is mistaken.

Sinema in 2018 and Joe Biden and Senator Mark Kelly in 2020 all won their elections because of a massive increase in voter participation in Arizona over the past decade. Notably, much of that increase consisted of hundreds of thousands of new voters of color brought into the electorate through the meticulous organizing work of organizations and activists of color such as LUCHA, founded by Alex Gomez and Tomás Robles Jr, and One Arizona, a coalition of two dozen organizations coordinated by Montse Arredondo.

From 2014 to 2018, when Sinema was elected to the Senate, the growing constellation of civic engagement groups registered nearly half a million people to vote, most of them Latino. When Sinema won her Senate seat in 2018, she did so on the strength of a vastly expanded electorate in which 800,000 more people voted than in the previous midterm election in 2014. The One Arizona coalition registered nearly 200,000 people to vote in 2018, and 55,000 newly registered Arizona Democrats cast ballots for the first time that year. Sinema won her seat race by just 56,000 votes.

How Kyrsten Sinema Sold Out

The one existing data point that superficially supports Sinema’s apparent belief that she possesses a unique and powerful appeal to moderate white voters is the 2018 exit poll finding that she received 45 percent of the white vote. At first glance, that level of white support is notably higher than the 40 percent Hillary Clinton received in the state in her 2016 presidential campaign and comparable to the 46 percent share of the Caucasian constellation that supported Biden last year. But when you dig a little deeper, that 45 percent number is dangerously deceptive and subject to wild misinterpretations (such as believing one has unique and powerful appeal to moderate white voters).

Across the country, 2018 saw a massive mobilization of Democratic voters determined to repudiate everything Trump, resulting in the highest voter turnout rates in 104 years. Democratic candidates across the country, including in Arizona, rode that wave. In Arizona in particular, almost all of the whites who came out in 2016 to vote for Clinton came back out in 2018 to vote for Sinema. Meanwhile, white Republican voters, content that they had installed their white man in the White House, stayed home (or went to the golf course). White Republican turnout plummeted, while white Democratic turnout stayed constant. 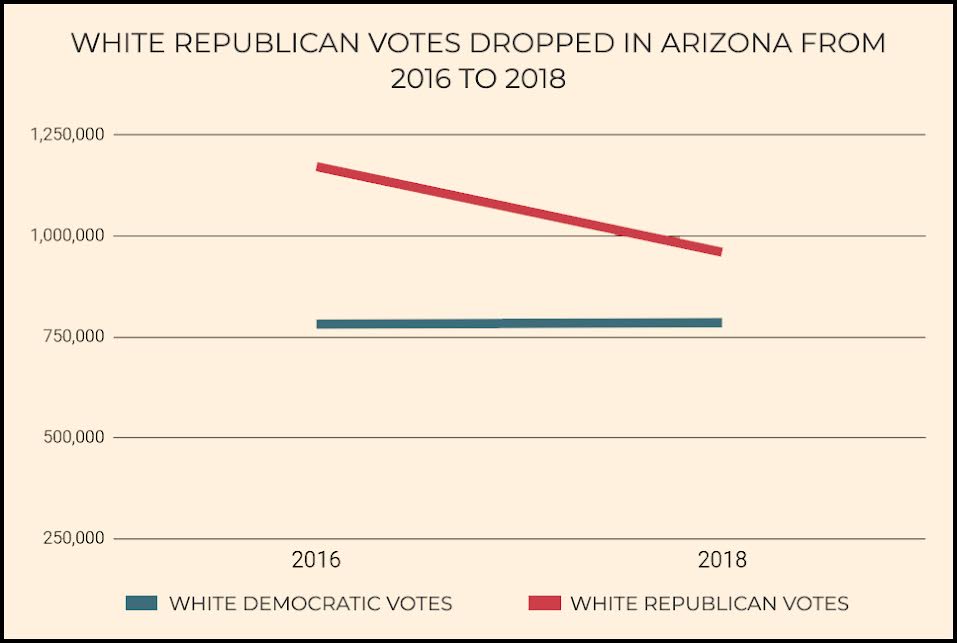 The outcome of this enthusiasm gap is that there were fewer white Republicans in the pool of actual voters, resulting in the white Democrats’ having a bigger percentage of those left in the pool, thus the 45 percent showing. Again, this is not evidence of Sinema’s brand having greater appeal with moderate white Arizona voters.

The second reason to primary Sinema is that she’s not an effective politician for Arizona, even on issues where there is demonstrable bipartisan support. She has publicly justified her conservative positions, saying in a 2018 interview with The New York Times, “What I’ve learned to do is use the tools and skills that I’ve learned to be productive and get stuff done…. Getting stuff done is amazing. It’s amazing when you can say, ‘I’ve delivered real results.’” When it came to raising the minimum wage, however, she delivered a death blow to the popular and progressive policy rather than delivering results.

If there’s one issue where there is clear and incontrovertible evidence of widespread public support in Arizona, it’s raising the minimum wage. In 2016, LUCHA and other progressive groups put an initiative on the ballot to raise the state’s minimum wage. In the same year that Trump won the state with 48 percent of the vote, the minimum wage measure passed with 58 percent of the vote. In nearly every single county, including all those won by Trump, the minimum wage measure passed handily, improving the quality of life for more than 1 million Arizonans and their families. 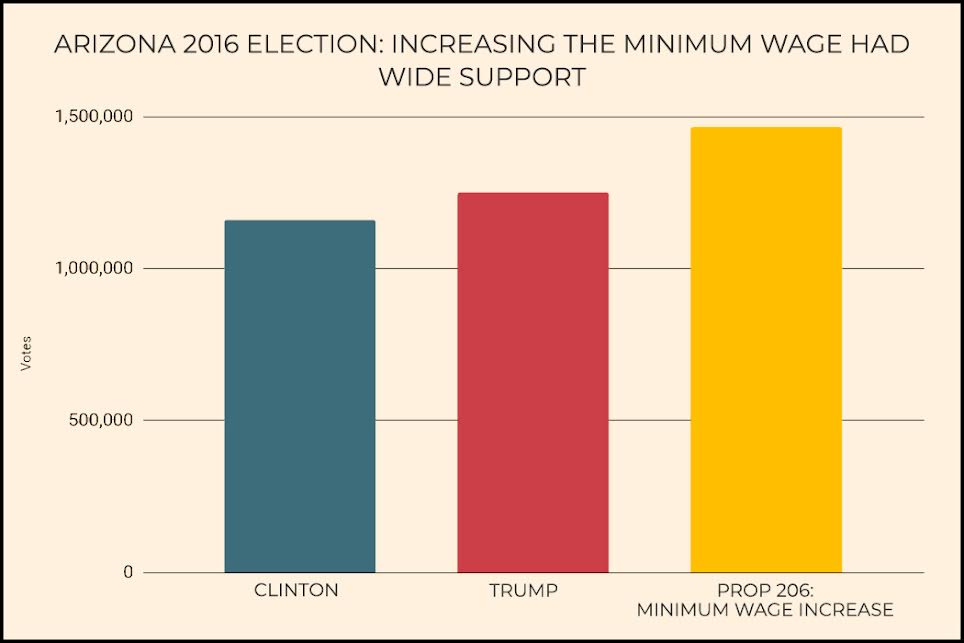 And yet, this past March, when the Senate was on the precipice of passing an increase in the minimum wage, Sinema memorably and cavalierly sauntered down the aisle in the Senate to vote no, dooming the measure. Bringing no results to the many Arizonans who would have benefited significantly from the policy—a policy whose fate she held in her hands.

What Happened to Kyrsten Sinema?

The third reason to primary Sinema is that she is torpedoing the prospects for Democrats’ holding on to the seat in the 2024 election and thereby jeopardizing the party’s prospects for controlling Congress. The statewide success in recent years of Democrats Sinema, Secretary of State Katie Hobbs, Senator Mark Kelly, and Joe Biden has illuminated the elements of a winning coalition in Arizona. None of those candidates won the white vote, meaning that their success depended on large turnout and strong support from voters of color.

Smart campaigns look to maximize the number of their strongest supporters, and they carefully track demographic trends. People of color are the most reliable and dependable Democratic voters, with 70 percent of Latinos supporting Sinema in 2018. The upside for Democrats among the Latino population is enormous. Two-thirds of that community tends to vote Democratic, and there are still half a million Latinos who did not vote in 2020. The pool of eligible Latino voters will only grow in coming years, as revealed in the recently released Census data showing that people of color now make up 47 percent of the total population and 57 percent of people under 18. More than 100,000 Arizona young people turn 18 every year. 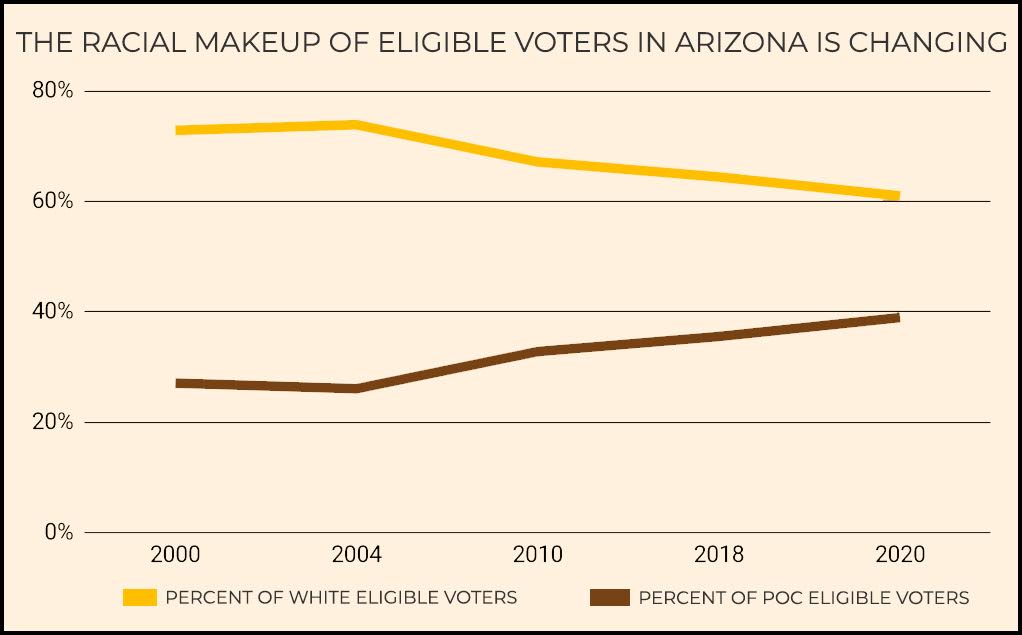 Not only is Sinema failing to make the most of this structural systemic opportunity, but she’s actively alienating the very population that constitute the core of a winning coalition. Despite the central role played by the civic engagement coalition in delivering hundreds of thousands additional votes in an election that she won by just 56,000 votes, The New York Times reported, “She has not once met with his group or its partners since taking office in 2019.” Refused to even talk to them. That is not how smart politicians solidify and expand their support.

While 2024 may seem a long way away, the damage Sinema is doing is happening right now, and she’s acting this way because she thinks she won’t face political consequences. In fact, she thinks these actions will add up to electoral success. But her math is wrong, as is her moral compass.

And that leads to the fourth and final reason to primary her—her betrayal of her own principles and what that says about her character and place in the political firmament.

In a book chapter titled “The Moral Compass of Ambition,” biographer Dan Carter tells a powerful story about former Alabama governor and staunch segregationist George Wallace. In reflecting on his life, Wallace told an interviewer, “I started off talking about schools and highways and prisons and taxes—and I couldn’t make them listen.… Then I began talking about niggers—and they stomped the floor.” While Sinema has not, that we know of, taken to talking about niggers, her ambition has broken her moral compass, leading her to pander to the same white racial fears and resentments that motivated whites in Alabama to elect Wallace as their leader.

For that reason alone, she should face a primary challenge, but, as outlined above, there are multiple more pragmatic and realpolitik reasons to begin the process now of fielding a strong challenge in 2024. Backing the Primary Sinema effort is an excellent place to start.