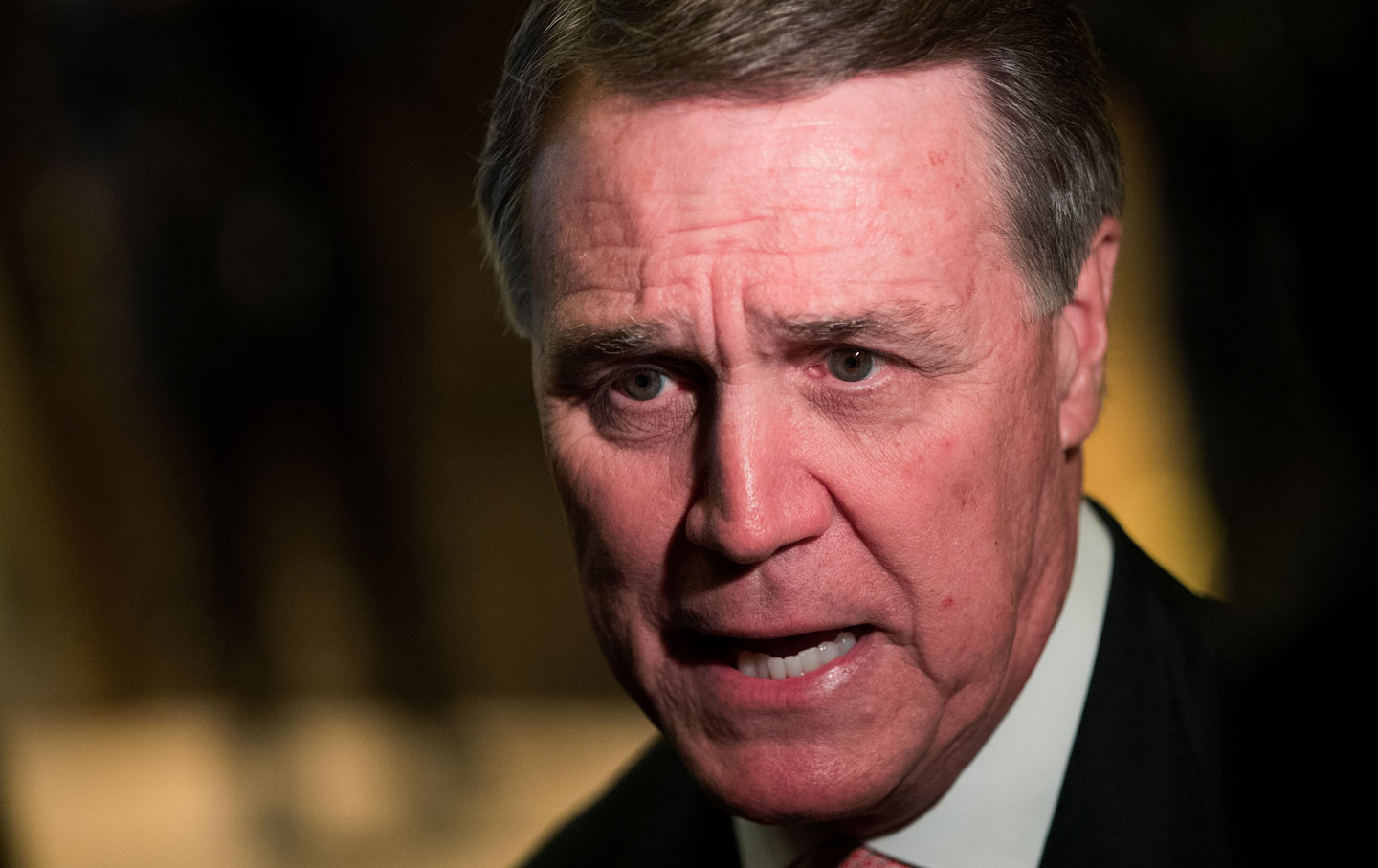 Georgia Senator David Perdue, the scandal-plagued millionaire who bought himself a Senate seat six years ago, has a strategy for keeping that seat in a critical January 5 runoff election that will help determine which party is going to control the chamber: He plans to hide.

On Monday the 70-year-old Republican incumbent signaled that he won’t participate in one of the Atlanta Press Club debates scheduled for December 6, the day before the registration deadline for voting in the pair of runoffs that pit Perdue against Democratic challenger Jon Ossoff and the state’s appointed Republican senator, Kelly Loeffler, against Democratic challenger the Rev. Raphael Warnock.

“I guess David Perdue doesn’t like being held accountable,” says Ossoff, the 33-year-old former intern for Representative John Lewis and aide to Representative Hank Johnson whose strong November 3 showing forced Perdue into the runoff election. The high-stakes Georgia votes will occur because state law decrees that if no Senate candidate gets 50 percent of the vote in the initial balloting, a second election between the top two contenders must be held. The stakes could not be higher: Wins by Ossoff and Warnock would give Democrats 50 US Senate seats, allowing Vice President–elect Kamala Harris to break a tie and shift control of the chamber to Senate Democratic leader Chuck Schumer and his caucus.

Referring to participation in debates as the “bare minimum” voters should be able to expect of runoff candidates, Ossoff ripped into his rival for dodging the discourse. “Looks like Sen. David Perdue is too much of a coward to debate me again,” declared the Democrat. “Perdue can’t defend his lies about COVID-19, self-dealing stock trades, his bigotry, or his votes to take away Georgians’ health care. Senator, come on out and try to defend your record. I’m ready to go.”

Ossoff’s sharp and unshrinking reference to Perdue’s lies, stock trades, and bigotry explain why the incumbent is so afraid to debate.

When the two candidates faced each other before the November 3 election, Ossoff shredded Perdue so devastatingly that videos from their exchange went viral.

Referring to complaints that Perdue engaged in self-serving stock trades early in the pandemic, when senators were being briefed on its potential impact and before the danger was widely understood, Ossoff said during an October 28 debate, “Perhaps Senator Perdue would have been able to respond properly to the Covid-19 pandemic if you hadn’t been fending off multiple federal investigations for insider trading. It’s not just that you’re a crook, senator. It’s that you’re attacking the health of the people that you represent. You did say Covid-19 was no deadlier than the flu. You did say there would be no significant uptick in cases. All the while, you were looking after your own assets and your own portfolio.”

Perdue was so overwhelmed by the criticism, and so ineffectual in responding to it, that a day later, his campaign announced that he would not attend a final scheduled debate with Ossoff. Instead, a Perdue aide offered this spin: “As lovely as another debate listening to Jon Ossoff lie to the people of Georgia sounds, Senator Perdue will not be participating in the WSB-TV debate but will instead join the 45th president, Donald J. Trump, for a huge Get-Out-The-Vote rally in Northwest Georgia.”

The decision to skip that last debate and tie the Trump and Perdue campaigns together for a big close did not end well. Trump narrowly lost Georgia to Democrat Joe Biden—becoming the first Republican presidential contender to lose the state since 1992. And Perdue, who had started the race as a prohibitive front-runner, fell below the 50 percent mark—barely finishing ahead of the Democrat, with 49.7 percent to 48 percent for Ossoff.

Now, Perdue is skipping another debate, and the Democratic challenger is skewering the Republican incumbent with a new line: “David Perdue isn’t just a crook—he’s a coward, too.”