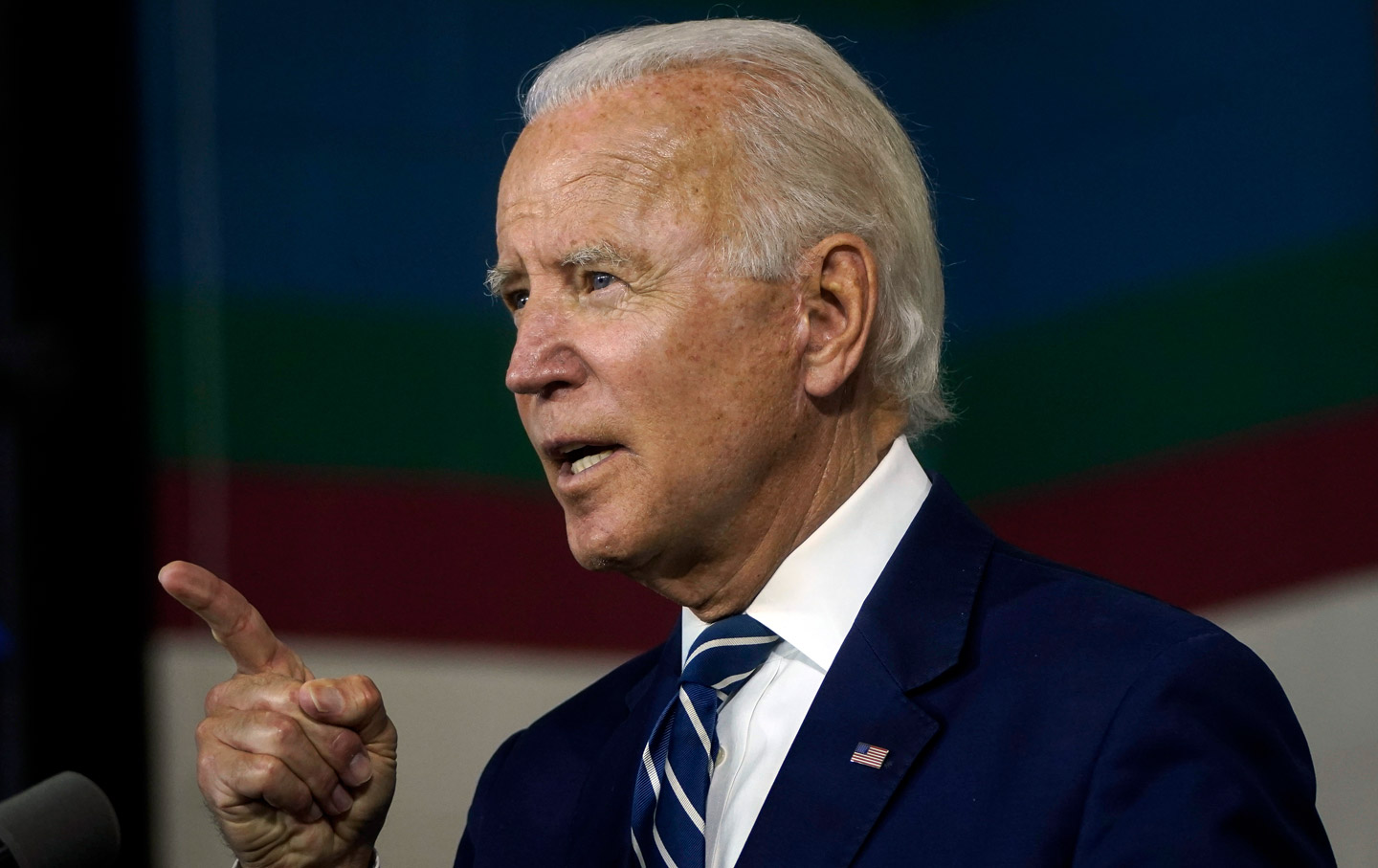 Donald Trump is terrified of accountability. That’s why he walked out of a critical interview with Lesley Stahl for CBS News’ 60 Minutes on Tuesday, and that’s why he’s been attacking the moderator of tonight’s final presidential debate, veteran NBC White House correspondent Kristen Welker.

Trump’s desperation is so evident and so politically self-destructive that it might lead Democrats to imagine that former vice president Joe Biden should simply coast on his lead in polls both nationally and in most of the 2020 battleground states. But this is no time to go easy on Trump. The president is stumbling; Biden must deliver the knockout blow tonight.

Like John’s writing? You’ll love him in conversation. Check out John Nichols and an extraordinary group of speakers at the first-ever virtual Nation festival, Nov. 18-21

The former vice president is fighting not just for himself at this point; he’s fighting for Democrats running in Senate contests that could flip control of the chamber—ending majority leader Mitch McConnell’s tenure as head of the partisan wrecking crew that refuses to respond to a surging pandemic and the economic devastation that extends from it as millions of Americans face unemployment, eviction, and hunger.

Biden should not worry about the distractions that Trump has prepared for tonight. Despite the president’s obsession with foreign intrigues involving his rival’s son, no one is going to change their vote because of what Rudy Giuliani claims to know about Hunter Biden. Nor will any “undecided” voter—if such a person still exists—be convinced by Trump’s incoherent ranting about Medicare for All, the Green New Deal, Black Lives Matter, Bernie Sanders, Alexandria Ocasio-Cortez, or “the radical left.” If the polls are to be believed, the Republican strategy of fear and loathing may appeal to the president’s dwindling base but it has no growth potential. 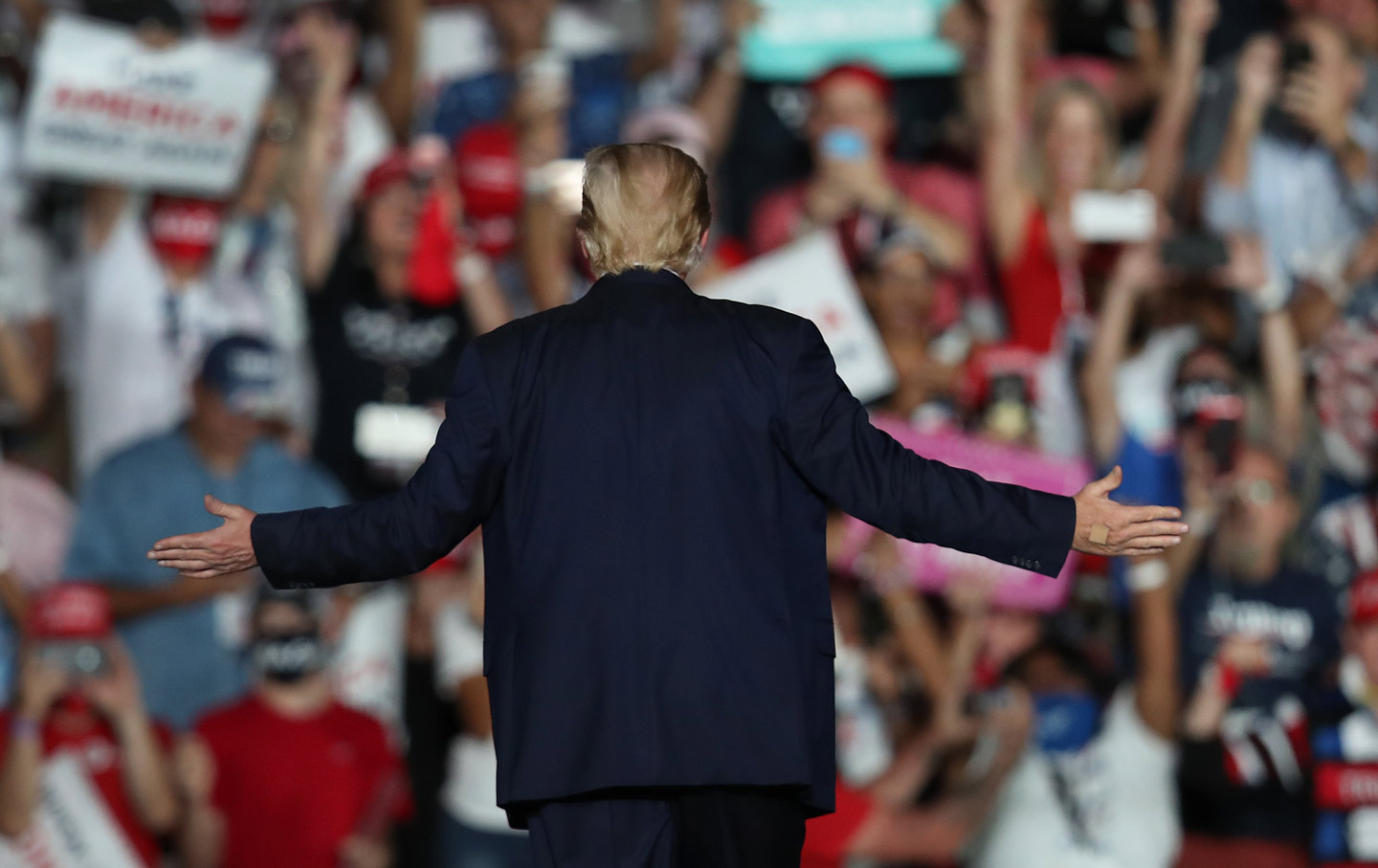 The Power of Covid-Positive Thinking

Jeet Heer and The Nation

Biden, on the other hand, can build his numbers—and the numbers for Senate candidates who are running on the Democratic line—with a stark, unapologetic, and unrelenting accountability argument.

This is a pandemic election, and Biden must indict Trump.

If Biden speaks of the death toll and the states where the pandemic is raging, where people are losing jobs, and where businesses are shutting down, he’ll meet Americans where they are as they prepare to mark their ballots. Biden should be specific, naming the cities, counties, and regions where Covid-19 is surging and killing Americans. He should detail the disproportionate damage this virus has done to people of color, the elderly, low-income Americans, frontline workers, and the vulnerable millions who lack adequate access to health care.

The facts are on Biden’s side. Trump has admitted to lying to the American people about the scope and severity of the pandemic in the critical early stages of the fight to contain it. Trump has attacked governors who have tried to contain it while he mocked public health orders, peddled snake-oil “cures” and promoted “reopening” schemes even after he was warned that doing so would allow the disease to spread.

The former vice president’s job tonight is to indict the sitting president, and to explain why Trump cannot be allowed to continue. Though he’ll be in the virtual presence of the incumbent, the Democrat must focus on the millions of Americans who are tuned in, and bluntly declare—as he did Sunday in response to Trump’s latest assertion that the United States has “turned the corner” in this pandemic struggle—that “Things are getting worse. He continues to lie to us about the circumstances.”

Trump will continue to lie. He will deny, deflect, dissemble, and interrupt. That’s what guilty men do.

Biden cannot allow himself to be distracted. There is too much at stake. Tonight, he can close the case not just against a president who deliberately endangered the nation he swore to protect but also against the Republican senators—like Joni Ernst in Iowa, Steve Daines in Montana, Cory Gardner in Colorado, Martha McSally in Arizona, Susan Collins in Maine, Thom Tillis in North Carolina, David Perdue in Georgia, John Cornyn in Texas, Lindsey Graham in South Carolina, and, yes, Mitch McConnell in Kentucky—who refused to hold the president accountable back when these crises might have been averted.

This is not a debate. This is a trial. Biden should prosecute Trump and his co-conspirators with a sense of urgency and righteous indignation that will be understood and embraced by an electoral jury that has the power to convict and punish the wrongdoers.