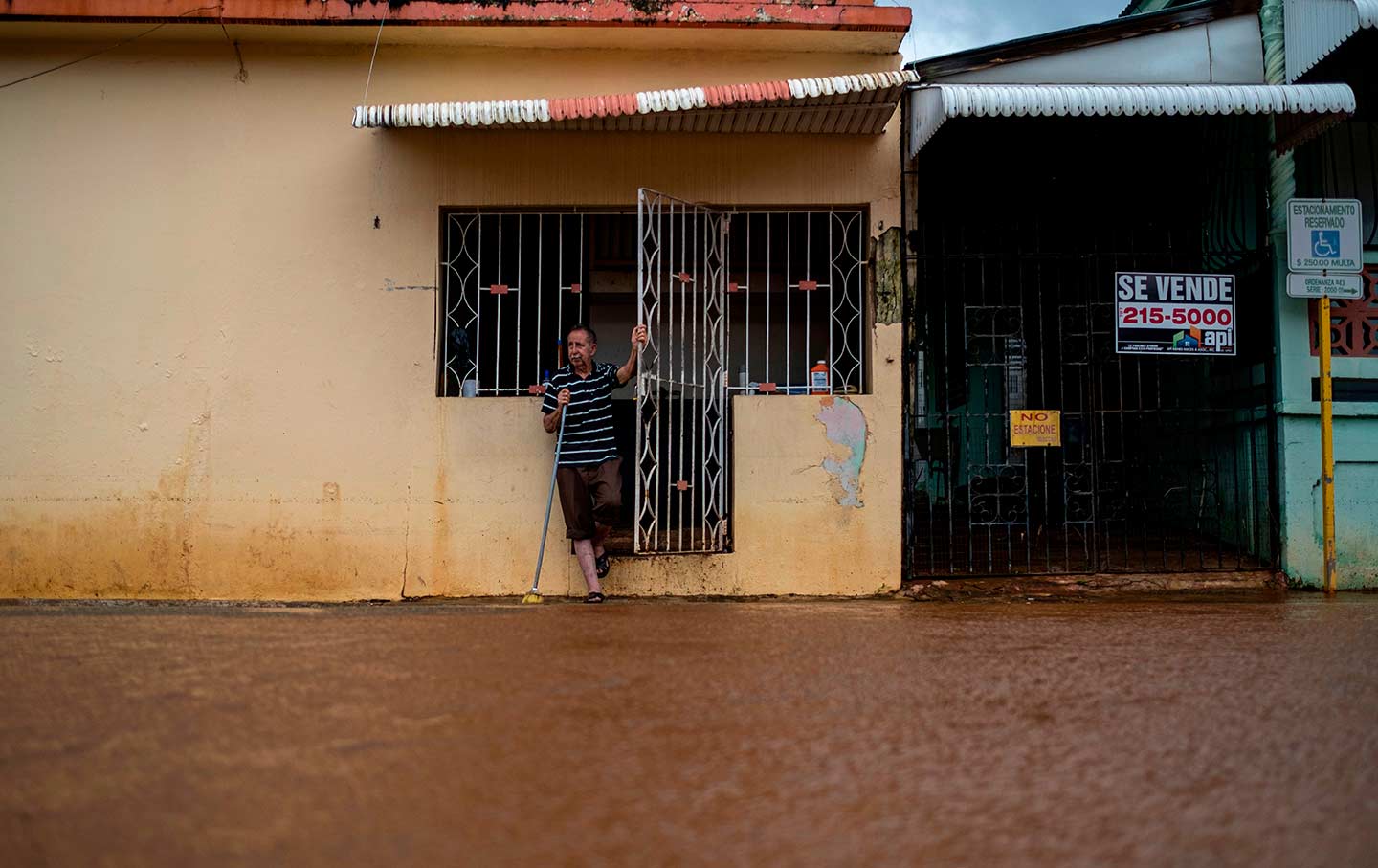 A man looks on from the front of his house after Tropical Storm Isaías affected the area in Mayagüez, Puerto Rico on July 30, 2020. (Ricardo Arduengo / AFP via Getty Images)

Perhaps the most emblematic image of Puerto Rico’s encounter with Tropical Storm Isaías last week was one of a National Guard soldier carrying a young boy on his back through Barrio Sábalo in the western town of Mayagüez, rescuing him from a rising torrent of brown water from nearby Caño (Canal) Majagual. That area, as well as Barrio Buenaventura, vulnerable to Rio Hondo and other smaller streams of water, was among the most visible recipients of Isaías’s heavy downpours as the storm swept the region on Thursday.

“It had been raining here all week,” said Ian Seda-Irizarry, a John Jay College economics professor who has roots in Mayagüez and has been visiting with family since May. “The ground was saturated with water, and the storm caused landslides. Fallen trees and electrical posts were strewn on the ground.” Hundreds of thousands of people, and 23 hospitals, were left without power in the wake of the storm. The littering of electrical transmission cables and posts recall the disastrous landscape following 2017’s Hurricane María, and for many around the island, they triggered memories of a very difficult recent past.

Just three days before Isaías hit, Thomas Van Essen, the regional administrator of the Federal Emergency Management Agency (FEMA) wrote Puerto Rico Governor Wanda Vásquez a letter informing her that in FEMA’s opinion her government “is not prepared nor has the ability to respond and manage a major event.” Citing a variety of reasons ranging from lack of emergency staffing to funding, communications, and planning, Von Essen’s revelations were not a surprise to most Puerto Ricans, who in early July learned that the governor was to be investigated by an independent prosecutor over an alleged mismanagement of supplies following January’s series of earthquakes.

Even though Vásquez—a reluctant governor who took office after last summer’s “people’s removal” of scandal-ridden Ricardo Rosselló through a quirk in succession rules—is an easy target, there are clearly many factors at work that keep Puerto Rico vulnerable to climate-crisis-induced devastation. “It doesn’t surprise us that FEMA would come out and say something like this, but at the same time, I don’t want to place the entire blame on the Puerto Rico government,” said Deepak Lamba Nieves, research director of the San Juan–based Center for the New Economy.

Puerto Rico’s recovery from Hurricane María has been greatly hampered, if not sabotaged, by its own government’s inability to reform inefficient and at times corrupt practices, but also the questionable FEMA-funded contracting and the austerity policies driven by the Federal Oversight and Management Board imposed by Congress’s PROMESA legislation of 2016, ostensibly designed to restructure the territory’s $72 billion debt.

“We’ve already been living through almost 15 years of austerity policies since the economy began shrinking in 2006,” said Lamba-Nieves. “And when you think of the cumulative effect of budget cuts, downsizing, what the board calls right-sizing entities and institutions, you see a storm that would normally seem like a tropical storm with not much damage creates widespread havoc on the population.”

Case in point might be the loss of electrical power in the Mayagüez region due to flooding around the Puerto Rico Electrical Power Authority’s Acacias substation. Guarionex Padilla Marty, graduate student in history at the University of Puerto Rico and cohost of the influential Plan de Contingencia podcast, tweeted a photo of Acacias surrounded by flood waters in the aftermath of the storm. 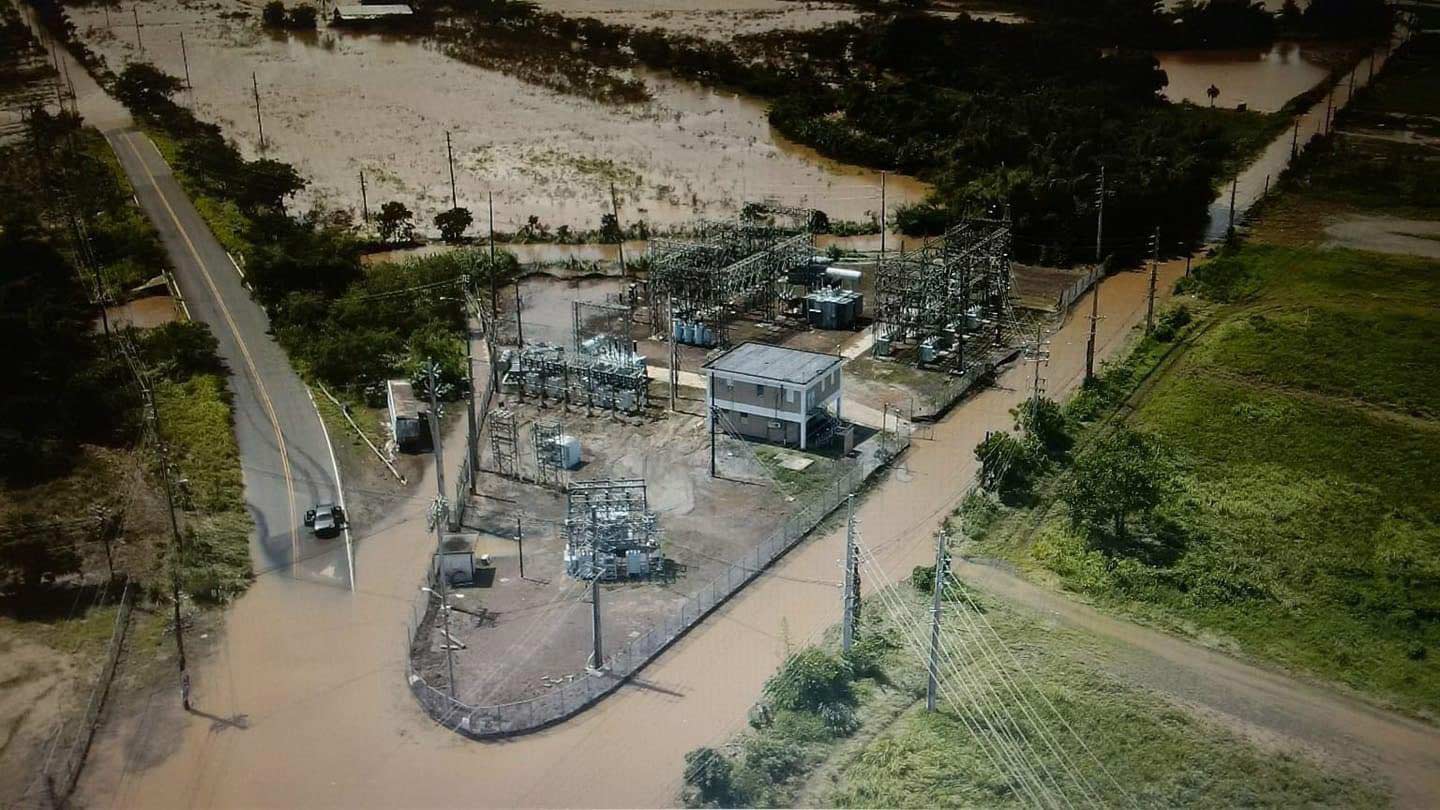 “The plant, which was constructed near the Guanijibo River, distributes electricity to other substations in the Southwest,” he said. “This is a large agricultural valley straddling the towns of Cabo Rojo, Hormigueros, and San Germán. It’s always suffered flooding.” On Tuesday, the Puerto Rico Department of Agriculture reported $47.5 million in losses due to Tropical Storm Isaías, including almost $2 million from San Germán and Mayagüez.

In May 2019, PREPA CEO José Ortiz announced that $3.5 billion in FEMA funds would materialize by August of that year to help build a more resilient electrical distribution system. Of those funds, he insisted, $308 million would be set aside for the relocation or reconstruction of 18 substations, including Acacias. “Evidently, nothing happened,” said Padilla. “The substation is flooded and has made impossible the restoration of electrical service to Southwest towns.” As of Tuesday night, Padilla says that many regions are still without power, including Cabo Rojo.

Ruth Santiago, a lawyer based in nearby Salinas who works with Queremos Sol, a group of renewable energy activists pushing to move island residents to solar power, said that, according to the Fiscal Plan filed with the island’s Fiscal Oversight and Energy Board, PREPA had received only $1.42 billion in public assistance funds as of April 2020. “So it doesn’t look like they received the $3.5 billion,” she said.

On Monday, Ortiz resigned, effective on August 5, closing another chapter in the public utility’s troubled history, which last fall included a misadventure with an outfit called Cobra Energy that resulted in the indictment of two FEMA officials on the charges of fraud and bribery in receiving $1.8 billion in contracts. Just last week, Ortiz seemed to go off the rails when he claimed that another set of power outages, days before Isaías’s arrival, were caused by an “act of terrorism.”

“He had lost all credibility—he said 99 percent of power would be restored by Friday,” said Santiago. “What we saw during Isaías shows how weak the whole transmission and distribution system is. There’ve been so many of these events and so much lack of funding. It’s definitely true that we’re not ready for a serious storm.”