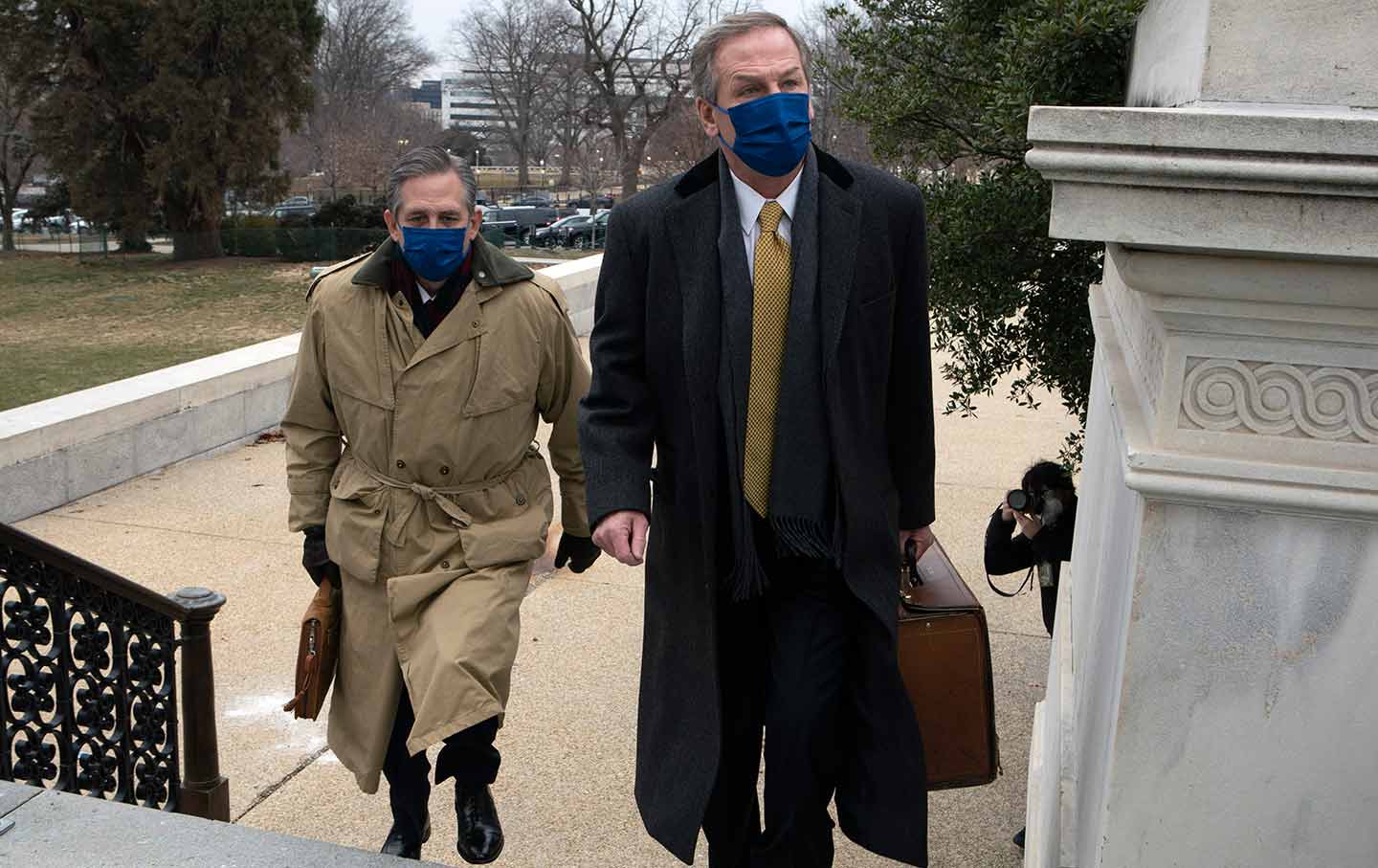 Nothing exposed Republican duplicity over Donald Trump’s role in the January 6 violence like the unanimous support for awarding a congressional Medal of Honor to heroic Capitol Police officer Eugene Goodman. At the end of a long day of impeachment trial lies, Senate minority leader Mitch McConnell joined top Democrat Chuck Schumer in hailing Goodman’s bravery defending their colleagues on that bloody day, when both men had reason to fear for their lives.

The fact is, Goodman alone did more to save lives that day than the man who was president of the United States. That went unsaid as the Senate chamber gave Goodman a standing ovation, and voted unanimously to award him the medal.

McConnell still seems to be more afraid of Trump’s enduring role in the GOP than of the rampaging insurrectionists who are now a month-old memory. It’s hard to imagine House impeachment managers winning 67 votes—as in 17 Republicans—to convict the ex-president. That’s not because his lawyers did a good job with his defense on Friday. They continued to earn every penny he’s probably not paying them. Given 16 hours, they took three. That was probably their only good decision.

The overall effect was to underscore that, in fact, no actual violence ever followed those 238 Democratic exhortations to fight. Also: Boy, are these Trump lawyers terrible.

Were they terrible enough that Trump could be convicted? Probably not. They gave the weak-minded cover, over and over—mainly by repeating that Trump told supporters to “peacefully and patriotically” go to the Capitol on January 6 “to make your voices heard.” That’s it. Oh, and Castor insisted there was no insurrection anyway. “Insurrection is a term of art. It’s defined in the law. It involves taking over a country, a shadow government, a TV station.” Hmm. McConnell had called it a “failed insurrection” that very night, as he summoned the Senate back to certify the Electoral College results the violence was designed to block.

I’m not sure refuting McConnell was a great idea—but the pathetic Kentucky senator will probably acquit Trump anyway. Probably. But I hope not.

Had the House impeachment managers confined their Wednesday and Thursday arguments to Trump’s January 6 speech alone, maybe Friday’s debunking would have worked. But one after another, the managers had shown how Trump whipped up fear of “Democrat” voter fraud, starting nearly a year ago, and gave his fans a “save the date” notice highlighting January 6 as a day to assemble en masse almost three weeks earlier. He followed up in dozens of daily tweets and almost every public appearance as the day approached.

The main thing the impeachment managers’ case delivered, which Trump’s lawyers ignored, was the evidence that Trump did nothing to quell the Capitol takeover, even as it was playing out on televisions worldwide. A man in love with power had his ultimate power moment: He could have rained holy hell upon the ragtag warriors who marched into battle under his banner.

He didn’t, of course. (That’s what the House brief defined as “President Trump’s Dereliction of Duty During the Attack.”) Trump’s pathetic defense came completely undone on Friday when GOP Senators Susan Collins and Lisa Murkowski tossed what should have been a softball, asking during the question-and-answer session when Trump learned about the Capitol riot, and how he tried to stop it. That’s a question with an easy answer—if Trump tried to stop it.

But he didn’t, and defense lawyer Bruce Castor essentially told the Republican senators to ask House Democrats why he hadn’t. Mitt Romney and Collins later followed up: What did Trump know about Vice President Mike Pence’s safety, or lack thereof, when the president was trashing him on Twitter? Again, Trump’s lawyers didn’t answer.

“The commander in chief did not defend the Capitol,” Del. Stacey Plaskett told them, the third time some version of the question was asked.

Plaskett, who represents the Virgin Islands, made herself a liberal superstar throughout the impeachment proceedings. (Best line: “This attack is not about one speech. Most of you men would not have your wives with one attempt at talking to her. It took numerous tries.”) Jamie Raskin will go down in history for everything he did this week. I especially enjoyed Jamie Raskin Unleashed, toward the end of the day, when he let loose at the Three Dumb Amigos, who never missed an opportunity to blame House Democrats for the way they were failing their client.

“Rather than yelling at us and screaming about how we didn’t have time to get all of the facts about what your client did, bring your client up here and have him testify under oath,” he told them at one point. And when they shamelessly raised the First Amendment case known as Bond v. Floyd, named for the challenge the civil rights hero Julian Bond had to mount just to be awarded the Georgia state Senate seat he was elected to, Raskin threw back: “Please don’t desecrate the name of the great Julian Bond, a great American, by linking him with this terrible plot against America.”

Oh, and did I mention that van der Veen (a) tried to defend Trump’s intimidation of Georgia Secretary of State Brad Raffensberger and (b) called him Ben Roethlisberger, who is a football player?

It was that kind of day.

In a just world, these three losers would lose. In the world we inhabit, they’ll likely win. But they didn’t make it easier for themselves.