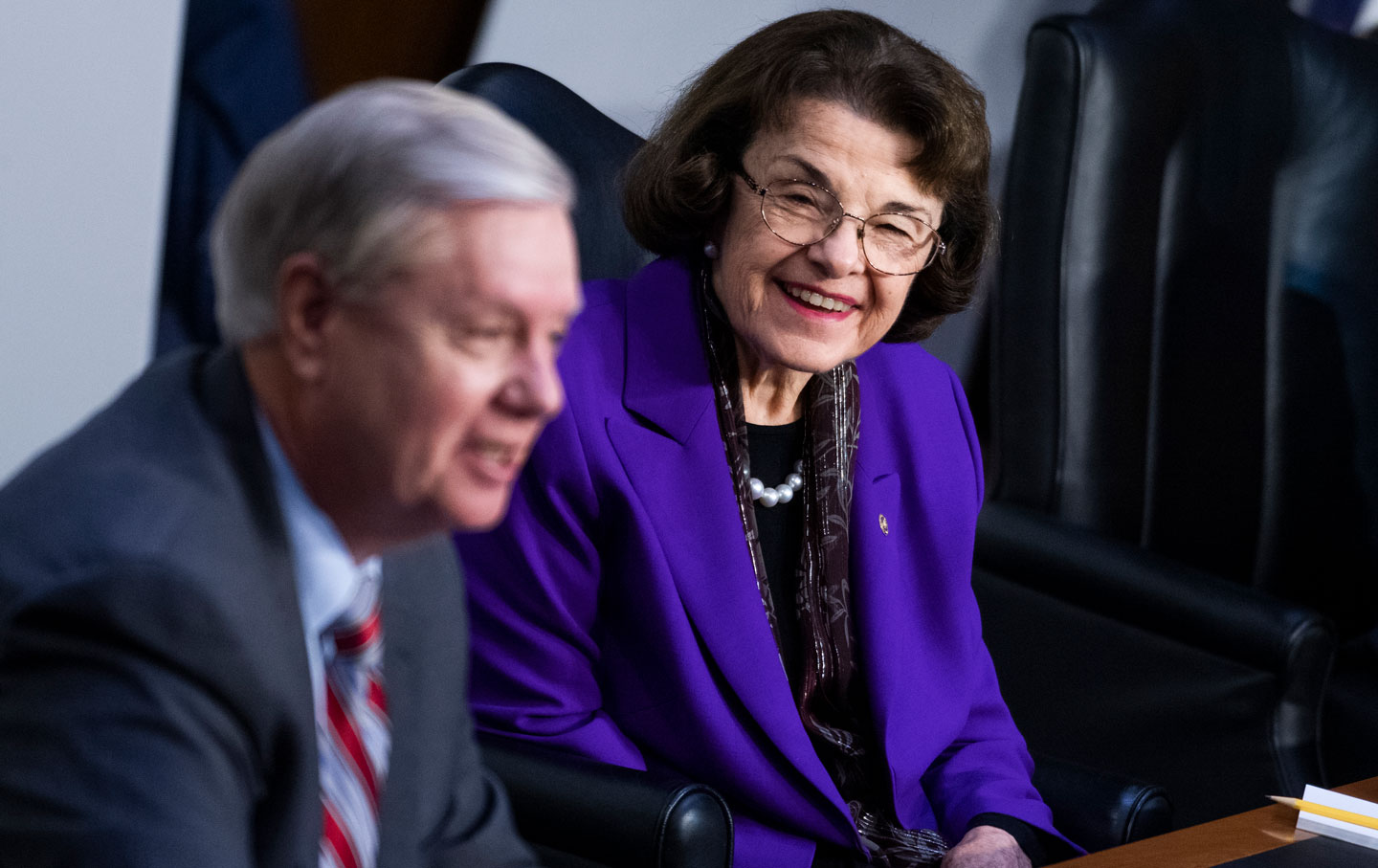 California state Senator Kevin de León challenged Senator Dianne Feinstein’s 2018 reelection run as a “proud progressive” who promised to stand “on the front lines and not on the sidelines” of the fight against Republicans who were transforming the federal bench into a platform for right-wing judicial activism.

His fellow Democrat, de León warned, was too cautious, too willing to compromise. “I think that she subscribes to country club rules in Washington that are grossly outdated and no longer apply to California and to the rest of the country,” argued the legislator, who complained about Feinstein’s “complacent, passive and muted” approach to a nomination he identified as “the greatest threat to our constitutional and human rights in a generation.”

Like John’s writing? You’ll love him in conversation. Check out John Nichols and an extraordinary group of speakers at the first-ever virtual Nation festival, Nov. 18-21

Feinstein’s team hit back, criticizing de León as “a classic losing candidate trying to create an issue out of nothing.” Even after grassroots activists surprised the establishment by getting the California Democratic Party to endorse de León, party leaders griped that the son of a Guatemalan immigrant who came of age as a community organizer and eventually served as the president pro tempore of the California State Senate was threatening party unity. The media speculated about whether de León was pushing the party “too far left.” Feinstein’s fellow senators and Washington-based groups that usually back Democrats rallied to support the 26-year incumbent’s reelection, which was eventually secured by a closer-than-expected 54-46 margin over de León.

It was all very typical of how party leaders and pundits have responded since 2018—the year in which Alexandria Ocasio-Cortez shocked DC with her New York primary defeat of the fourth-ranking Democrat in the House—to the prospect of electoral accountability.

But, now, two years later, Feinstein is at the center of a controversy over her role as the ranking Democrat in the Senate Judiciary Committee that on Thursday approved the Supreme Court nomination of Judge Amy Coney Barrett. While Feinstein has been critical of the Barrett nomination, the senator concluded an unusually tepid hearing process by hugging Judiciary Committee Chairman Lindsey Graham and hailing the rushed deliberation as “one of the best sets of hearings that I’ve participated in.”

This week’s confirmation hearings for Judge Amy Coney Barrett for the US Supreme Court have been a travesty from start to finish. But no moment has shown the disconnect between the Senate and voters and our leaders’ utter disregard for our communities’ concerns [more] than Sen. Dianne Feinstein’s abhorrent praise of Sen. Lindsey Graham, calling it one of the best hearings she has ever joined. She said this despite knowing that if Barrett is confirmed, millions of Americans stand to lose their health care. Her careless words undermined their long fought struggle for decent health care and the tireless work of her colleagues to preserve it.

There is nothing praiseworthy about these proceedings. On the contrary, they have debased our democracy, voters and the legacy of Supreme Court Justice Ruth Bader Ginsburg. Sen. Feinstein’s performance and remarks during these hearings give yet more proof that she is ill-equipped to speak for voters. She must immediately step down from her post as ranking member of the Senate Judiciary Committee.

Brian Fallon, the executive director of Demand Justice, a group that has played a leading role in the fight against right-wing judicial nominees, called for Feinstein to step aside as ranking member, arguing that Democrats on the Judiciary Committee shouldn’t be led by someone who treats “the Republican theft of a Supreme Court seat with kid gloves.” Senate minority leader Chuck Schumer says he “had a long and serious talk with Sen. Feinstein.” Republicans, by contrast, have been celebrating her. In response to some activists’ calls to replace California’s senior senator as the ranking member of the Judiciary Committee, Texas conservative John Cornyn griped that it “would be a real shame if they run her off.” Iowa Senator Chuck Grassley termed criticism of Feinstein “sexist” and “ageist” and tweeted, “She’s such an outstanding legislator, it’s totally unjustified.”

No surprise that they would think that, when she’s giving them rave reviews for a rigged process.

The cynical response of the Republicans highlights the damage Feinstein’s conciliatory approach has done to what was already a difficult fight. As NARAL Pro-Choice America president Ilyse Hogue explained:

Americans—whose lives hang in the balance—deserve leadership that underscores how unprecedented, shameful and wrong this process is. The Ranking Member of the Senate Judiciary Committee, Senator Dianne Feinstein, failed to make this clear and in fact offered an appearance of credibility to the proceedings that is wildly out of step with the American people. As such, we believe the committee needs new leadership.

That is precisely what Kevin de León, who was recently elected to the Los Angeles City Council, warned about in 2018. Those nay-saying party leaders and pundits would do well to recall this fact the next time they complain about upstart challenges by progressives to entrenched incumbents.

Because of California’s nonpartisan blanket-primary law, which allows the top two finishers to progress to the November ballot, de León faced Feinstein in the fall of 2018, during the fight over President Trump’s Supreme Court nomination of Brett Kavanaugh. The challenger criticized Feinstein’s handling of that year’s confirmation fight as disjointed and ineffectual. Like a number of critics, de León said she had not been aggressive enough after she was informed of a letter alleging sexual misconduct by the nominee. But the problem, de Léon said, went deeper. Noting that Feinstein “has historically demonstrated that she is not willing to take the fight to the Republicans,” de León pointed to the incumbent’s record of approving even the most controversial Republican judicial nominees.

“I would never have opened the door to his confirmation to the Third Circuit Court of Appeals, basically, the farm team for the Supreme Court,” de León said in an interview about the Kavanaugh nomination fight. He continued:

Senator Feinstein volunteered her vote in 2006 to allow this man, a known partisan political operative, to hit the Senate floor for confirmation. If that didn’t happen quite frankly we would not have Brett Kavanaugh before the U.S. Senate today, and I would not vote to confirm 60 percent of Trump’s judicial nominees. Now these are, as we know, lifetime appointments, and these are men who almost surely will undo a woman’s right to choose, workers rights, civil rights, voting rights, our environmental laws, so this is something that I would have done dramatically different than the current senior senator from California.

Those words from just two years ago sound all the more prescient as Democrats fret about Feinstein’s praise for a process that has sent the most threatening Supreme Court nomination of the modern era to the floor of the Senate.