Two socialists emerged from a flower shop in Astoria, Queens, with a bouquet of red roses. Jabari Brisport, 33, a newly elected state senator from Brooklyn, sported a red Democratic Socialists of America hoodie while Zohran Mamdani, 29, a newly elected assemblyman from Queens, wore a red-and-black checked Arsenal jersey—an item he’d just purchased and later characterized as “this ridiculous shirt” yet was plainly excited to show off. NYC-DSA endorsed both this year, and the pair spent the overcast November weekend surprising each of the organization’s freshly endorsed City Council candidates at home with a rose. (The color red has represented socialism and communism at least since the 1840s, while the red rose, now the symbol of the Democratic Socialists of America, has been associated with socialist and social democratic movements and parties since the 1880s.) “I’d like to point out that he didn’t pay [for the flowers]. That’s the problem with socialism,” Mamdani ribbed Brisport, impersonating a conservative. “Eventually you run out of other people’s money.”

The two were part of a slate of five candidates for state government endorsed by NYC-DSA this election cycle. The others were Julia Salazar, the sole incumbent, representing North Brooklyn in the state Senate; and Assembly challengers (both tenant organizers) Peruvian-born Marcela Mitaynes in Sunset Park and Phara Souffrant Forrest of Crown Heights, a nurse and daughter of Haitian immigrants. All five won their races, in a huge show of power for an organization that has only been a significant force in New York electoral politics for two years. Through a retreat in October, weekly Zoom calls with fellow NYC-DSA members, and other meetings and texts, the socialist five have been getting to know one another and planning their Albany strategy. I’m an NYC-DSA member; I live in Brisport and Forrest’s districts, and volunteered on their campaigns as well as Salazar’s. I can’t wait to see what happens next.

Mamdani was kidding about running out of “other people’s money,” but it’s an important joke. Everything the socialists want to achieve in office—eviction relief and other urgent assistance; full funding for transit, schools, and health care; a Green New Deal for New York—costs money. The first item on their legislative agenda, then, is the one that could make everything else possible: taxing the rich.

Ninety percent of New Yorkers favor increasing taxes on millionaires and billionaires. In a deadly pandemic and a devastating recession, the needs are obvious, with lines for food pantries spanning blocks. Still, the policy won’t be decided on its moral rightness or even its popularity but by a power struggle. On the socialists’ side is an organized movement and a receptive public. Against them, most likely, will be Governor Andrew Cuomo and the ruling class he represents.

Cuomo, Salazar told me, “is practically a Republican.” Taking shelter under a temporary pandemic lean-to outside a bar on Wyckoff Avenue in Brooklyn’s Bushwick neighborhood, on a cold, rainy evening last month, Salazar sipped a hot toddy and explained how power is organized in Albany. “The way the budget process is constitutionally designed gives outsized power to the governor,” she said, explaining that the legislature isn’t empowered to add items to the budget without the governor’s consent. This makes progressive legislation especially tough, since Cuomo, she said, “is a fiscal conservative, proudly committed to austerity.” He’s a crucial part of the reason New York state has a budget shortfall, despite having at least a million millionaires and 118 billionaires.

But Salazar observed that the winds around Cuomo were shifting, with even moderate legislators now calling for taxing the rich. Senate majority leader Andrea Stewart-Cousins, who represents wealthy Westchester County, said this summer that raising taxes was unlikely despite the state’s looming budget crises. Yet as soon as all the absentee ballots were counted and all five members of the DSA slate declared victory, Salazar said, the Democratic leadership in the legislature released a public statement saying the state government needed to raise revenues. “That was very telling, to me, of what was to come in January.” The presence of more socialists in Albany, Salazar emphasized, “will really make a difference.”

In fact, the socialist victories over longtime incumbents should serve as a warning. NYC-DSA cochair Chi Anunwa put it this way: “Hey, you know, if you don’t want to raise revenue and provide housing and health care to all, that’s fine. But don’t be surprised if you experience our primary challenge.”

Before 2018 Cuomo mostly got his way. A cadre of Democrats in the state Senate who caucused with the Republicans made progressive legislation almost impossible. In 2018, a grassroots campaign defeated nearly all of those conservative Democrats, replacing them with progressives. It was then that DSA made its first foray into state politics, electing Salazar to the state Senate. Salazar, DSA, and a coalition of tenants’ rights groups seized the moment, expanding protection for renters in New York State for the first time in 40 years. The real estate industry is one of the most powerful interest groups in the state, and most political observers both inside and outside DSA were shocked that it could be defeated by grassroots organizing. “The governor could have vetoed it,” said Michael Kinnucan of the Brooklyn DSA Electoral Working Group. “I would have thought the rent laws would be the last thing he’d want to compromise on.”

Cuomo is known as a vengeful bully, and a great deal of New York politics is explained by the fact that people know that if they cross the governor, they may face punishment. Cuomo’s also skilled at resisting policy moves from the left, while retaining something resembling heartthrob status to the party’s liberal base. In the early days of the pandemic, many incorporated his briefings into their daily routines and wore “Cuomosexual” T-shirts. But this mystique around the governor’s political power, said Kinnucan, though not unfounded, has often served to let the legislature off the hook. Now that Cuomo’s power is increasingly challenged, New Yorkers are learning that he’s not the only decision-maker in Albany. When Cuomo’s real estate industry cronies called him to ask him to stop the pro-tenant legislation from passing last year, he told them to call their legislators.

It’s too early to say whether this story will be repeated in the fight for progressive taxation. Last summer, Cuomo argued that taxing New York’s wealthy would mean “you’d have no more billionaires,” as if, New York Times columnist Ginia Bellafante quipped, “someone had proposed killing off the warblers of the Adirondacks.” Recently, however, Cuomo seems to have tacked to the left on the matter. In late November he warned that New York would need to raise taxes on the wealthy if no pandemic-related aid were forthcoming from Washington, which depends partly on the outcome of next month’s Georgia Senate runoffs. In early December, Cuomo went further, suggesting that such tax increases were likely regardless of what happens in Georgia or Washington. He’s perhaps conceding in advance to the politically inevitable, hoping to take credit for a popular policy he initially opposed (as he’s done before)—or preparing the ground for a small, watered-down tax increase that will appear responsive while making everyone to his left look like Ho Chi Minh (as he’s also done before).

How will the elected socialists, DSA, and their allies prevail? Through an “inside/outside” strategy, Anunwa explained, with the new officials organizing their colleagues, while the rest of DSA, in turn, organizes the grassroots to pressure Albany. 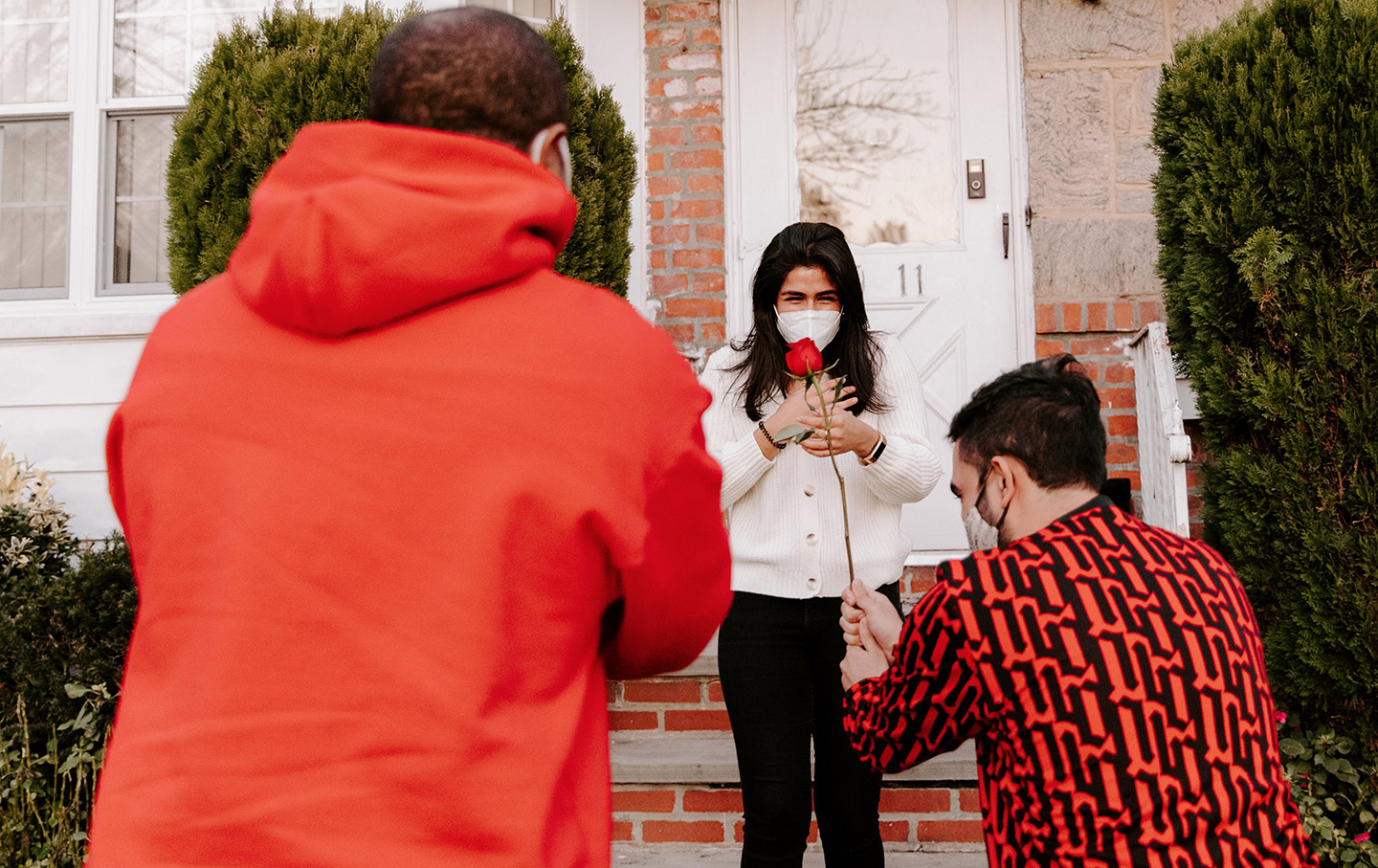 The grassroots campaign launched in early December, with phone banking and leafletting urging New Yorkers to pressure their legislators to support legislation taxing the rich. About 785 volunteers participated in the campaign in the first week, making more than 105,000 calls and hanging flyers on some 60,000 doors (no canvassing yet due to Covid-19). On the phones, volunteers found tremendous enthusiasm for the campaign; the phone bank technology allows the volunteer to put the constituents through to their legislator’s office right that minute to tell them to support the bills, and DSA volunteers have been especially struck by how many people (968 in the first week) chose this option. It was the most successful launch of any single-issue campaign in NYC-DSA’s history.

NYC-DSA is not the only powerful organization fighting to tax New York’s rich. A coalition called New York Budget Justice—which, along with NYC-DSA, includes Alliance for Quality Education, Indivisible Harlem, and more than a dozen other groups—has formed solely around this demand. In mid-December, the week after NYC-DSA launched its Tax the Rich campaign, 10 labor unions plus the New York State AFL-CIO publicly joined the call, with the union that represents transit workers, Local 100 TWU, organizing a rally in mid-December with DSA and other labor unions.

Sitting in Astoria’s Socrates Sculpture Garden, Brisport and his chief of staff, Kara Clark, who was active in DSA’s Defund the Police campaign, talked about building relationships in Albany, where they have a growing number of progressive and even fellow socialist allies. But the slate is working on their more moderate future colleagues, too. Brisport, a middle school math teacher about to become the first openly gay Black person in the New York State legislature, has befriended Andrea Stewart-Cousins, the first Black woman to be the state senate’s majority leader. Brisport helped her out in the fall with the fight to keep a Democratic majority in the legislature, volunteering on campaigns in swing districts where Democratic seats were threatened by Republicans. (Now that all the absentee ballots have been counted, the Democrats have a veto-proof supermajority.) Asked if the majority leader is receptive to the socialist agenda, Brisport paused and answered, “She’s receptive to me as a person, so that’s good.” This means more than many working outside government might suppose. Mamdani observed that how legislators vote or what bills they sign onto is often not ideological but “because their friends asked them to.”

The next day, I met Brisport and Mamdani in Brooklyn. Brisport wore the same red hoodie as the previous day, while Mamdani, who was born in Kampala, Uganda, repped the Nigerian national soccer team with a black-and-white checked jersey almost as loud as the previous day’s choice. Neither were dressed quite warmly enough for the chilly day. This time Brisport paid for the roses. One of the City Council candidates we visited, Brandon West, a community organizer, answered his door warily. He seemed relieved when Mamdani and Brisport presented him with a rose, admitting sheepishly, “I thought I was getting hazed.” NYC-DSA is no fraternity; West’s new comrades came only in solidarity and left extra flowers for his roommates. But the socialists are indeed about to be hazed by the state’s political establishment. In any case, they’re getting ready.