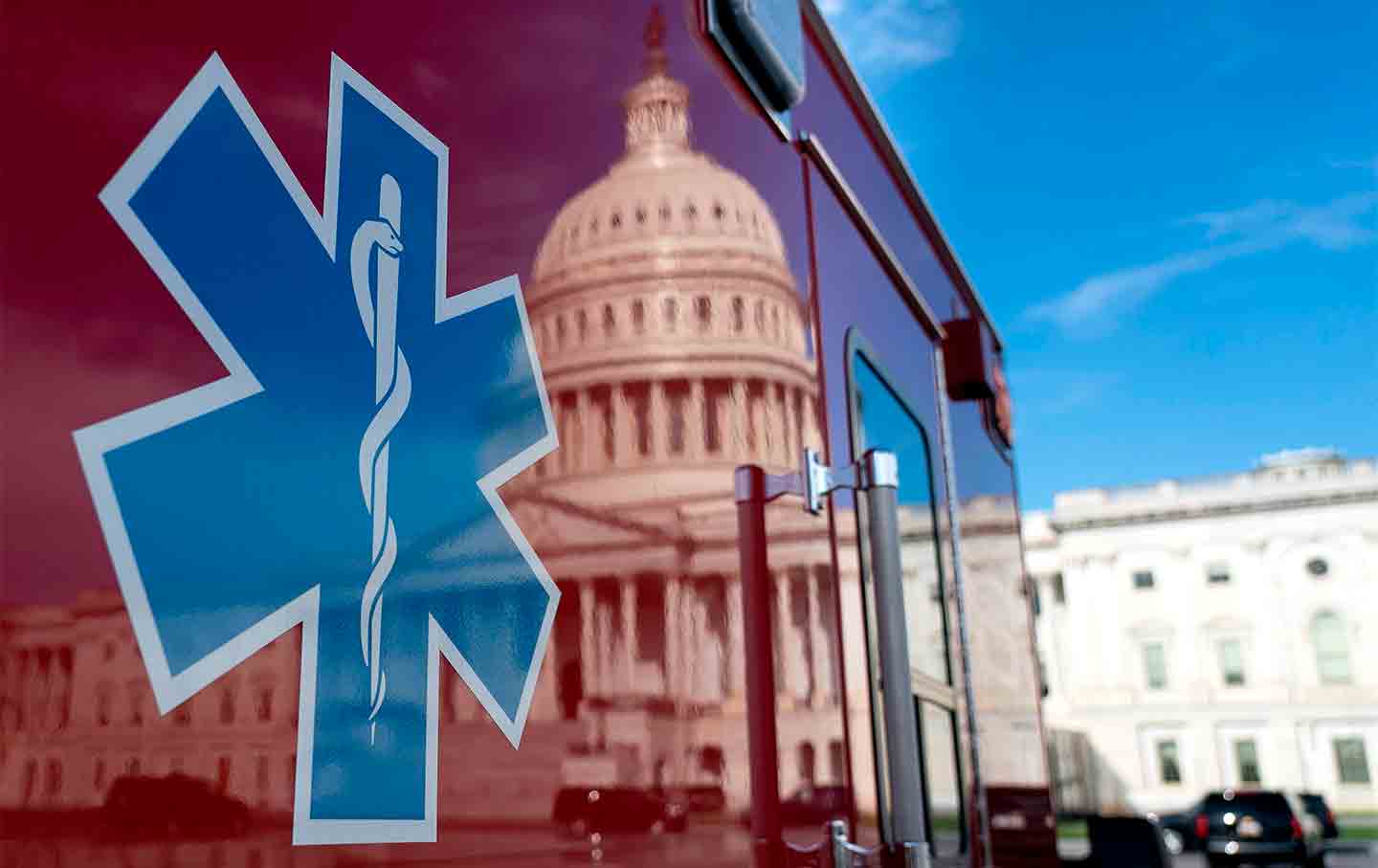 Ambulance in front of the US Capitol. (Alex Edelman / AFP via Getty Images)

Congress was upended in mid-March when the coronavirus pandemic forced most of its members to join their constituents in staying home from workplaces. While millions of Americans are now Zooming into their jobs, using readily available technologies for communicating and deliberating, the House and the Senate remain offline.

That suits a lot of Republicans just fine. They don’t choose to serve as anything more than backstops for President Trump, who has dominated the discourse with a steady stream of “don’t blame me” press briefings and tweets. Members of the House Republican caucus are objecting to basic oversight of how the administration is responding to the crisis—even as Congress consents, with scant debate, to trillions of dollars in new spending to address health care demands and mass unemployment.

Things got especially ugly last week, when one of the president’s most outrageous defenders, Ohio Republican Jim Jordan, blew up during a rare and sparsely attended session of the House Rules Committee. Jordan attacked a Democratic proposal for a select panel to oversee the federal coronavirus response. “This is just one more attempt by the Democrats to go after the president,” grumbled Jordan.

Jordan’s over-the-top performance drew a rebuke from Maryland Democrat Jamie Raskin. “I cannot accept the counterfeit outrage of people upset about the fact that we’re creating a committee to conduct oversight over the trillions of dollars of the taxpayers’ money that’s going out the door to try to clean up after the messes created by the government,” said Raskin. “I would so love to hear how my friends would have reacted if President Obama had brought our country to its knees economically, in public health, and constitutionally, the way this president has. Can you imagine what they’d be saying if we were wearing masks up here under President Obama?”

The charged incident revealed the extent to which Congress is out of order. Jordan and Raskin were going at it from opposite ends of an almost empty room. Many of their colleagues were out of town; many others who were in DC weren’t present, because of social distancing requirements.

If the House were formally set up to hold virtual hearings, Raskin notes, committee members could have been present virtually. They could have seen each other on-screen and debated and voted in relatively normal fashion.

But even now, weeks into the crisis, the House remains disconnected.

That’s got to change. Congress, particularly the Democrat-led House, needs to get back to the work of holding hearings, debating, voting, and aggressively checking and balancing the president and his cabinet.

Republicans claim that the only way to reopen Congress is by abandoning the safety protocols put in place to prevent the spread of the disease. Democrats know that’s not true.

Under pressure from members of the House Democratic Caucus, House Speaker Nancy Pelosi began moving last week to put in place procedures for proxy voting, which would allow the House to take formal action on major issues and to put pressure on the Republican-led Senate to do the same.

Unfortunately, Pelosi and her team scrapped the initial plan and created a task force that was to be led by McCarthy and House majority leader Steny Hoyer to come up with a bipartisan proposal.

The effort appears to have gone off the rails; McCarthy has proven to be far more interested in attacking Pelosi than in doing his job.

So Pelosi and Hoyer are now signaling that the House could vote as soon as next week on a plan to effectively allow members who cannot travel to DC to vote remotely. The move is popular with the Democratic caucus, as a Monday call with members indicated. According to Politico, “Pelosi asked members to text her if they supported proxy voting. The result of the informal survery, Pelosi said, was 20 to 1 in favor.”

It is clear that if Republicans object, a Democratic majority can make the change on its own.

The Democrats should not hesitate to do so. Nor should they hesitate to go all-in for formal—if, for now, virtual—oversight of the administration’s coronavirus response and of spending associated with the “Coronavirus Aid, Relief, and. Economic Security Act” (CARES) legislation that was hastily approved in late March by the House and Senate.

If Republicans choose to complain, as a McCarthy aide did Monday, that “Democrats are now willing to sacrifice over 200 years of precedent to atone for their lack of planning and leadership,” so be it.

The pandemic has upended plenty of precedents, and the economic fallout from it will continue to do so. Americans have proven to be strikingly adaptable. In addition to businesses and schools, state and local legislative bodies are operating remotely—holding hearings, debates, and votes. Congress can do the same.

After all, the key precedent with regard to Congress is the one outlined in the Constitution of the United States, which established separate branches of government and a system of checks and balances, and stated unequivocally in Article 1: “Each House may determine the Rules of its Proceedings.”

It is unimaginable that the founders, veterans of a revolution against imperial power, would have wanted the House to sit idly by as an imperial president makes himself the face of the federal government. They would have recognized, as Representative Dean Phillips does, that “we cannot leave it just to the administration to have the megaphone.”

The need to amplify the House will only become more acute in the coming weeks, as the debate over how and when to “reopen” the states heats up. Raskin, who has worked with a group of House members to write comprehensive legislation to help states implement safe, sustainable, and science-based reopening plans, is at the center of that debate. He argues that any federal role in this process must be defined by Congress—not Trump’s outbursts. If Congress is sidelined, he warns, “that’s a real problem.” The answer to the problem is to recognize that members can respect #StayAtHome orders while utilizing new technologies for virtual hearings and remote voting to do their jobs.

No matter what the Republicans say, it is possible to safely and quickly reopen Congress.