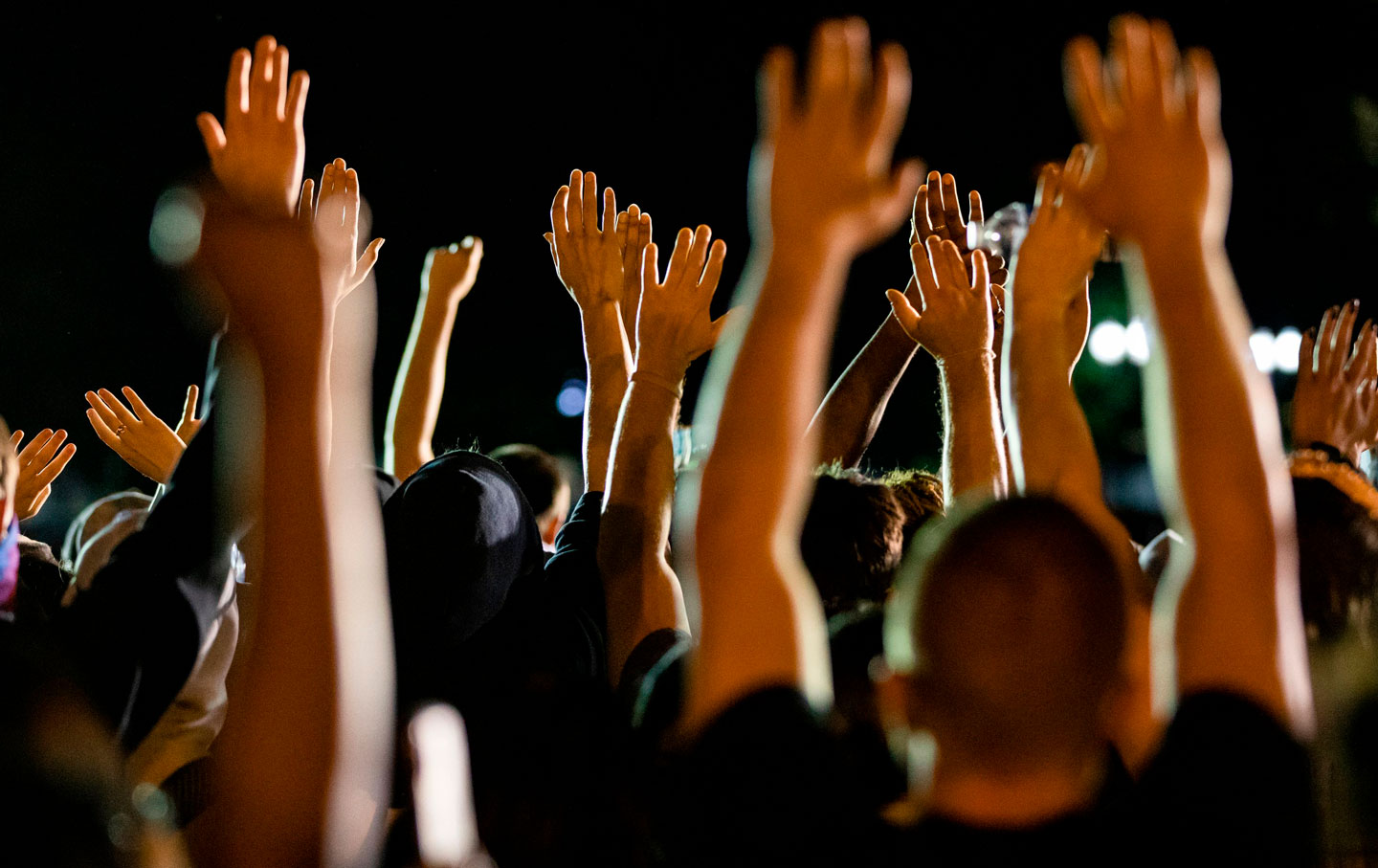 Donald Trump is a desperate man who knows his reelection prospects are narrowing. So he is determined to make a political issue of the upsurge in protest against police brutality and the failure of our criminal justice system.

Democrats who are stuck in the past fear that they will lose the debate and experience the sort of political backlash that cynical Republican politicians such as Richard Nixon and Ronald Reagan—and more than a few conservative Democrats, such as Los Angeles Mayor Tom Yorty and Philadelphia Mayor Frank Rizzo—stirred up in the 1960s and ’70s. But Democrats who look to the future recognize that the way to win this debate is not by going soft and hoping to ride out the storm, especially as a new Reuters/Ipsos poll finds that “a majority of Americans sympathize with nationwide protests over the death of an unarmed black man in police custody and disapprove of President Donald Trump’s response to the unrest.”

The Democrats who have their finger on the pulse of the moment understand that what’s needed now is a politics that speaks blunt and necessary truths about a crisis fostered by decades of neglect.

Charles Booker is such a Democrat, and he is running an inspired race for the Democratic US Senate nomination to take on Senate majority leader Mitch McConnell. From the start of his bid, Booker has challenged status quo thinking and status quo politics. Instead of mounting a vague, centrist bid that avoids talking about the need for structural change, Booker campaigns as a true progressive, leaning into the discussion with an argument for necessary action.

“We are shifting the course of history right now,” says the state legislator, who has marched in Louisville with activists who are demanding justice for Breonna Taylor, an EMT and emergency room technician who in March was killed in her home by Louisville police; for George Floyd, who last week was killed while in police custody in Minneapolis; and for all the victims of police brutality. “We need to speak from a place of moral clarity, and to get to the root of the issues we are discussing.”

The Louisville Democrat has been on the streets of his hometown this week, joining vigils and rallies to protest the killing of Taylor and others. He has been teargassed and found himself in circumstances where he has been called upon to help dial down tensions. He speaks poignantly about being heartbroken. But he also speaks of a need to take on a system that has failed to deliver change, saying, “We understand the importance of peaceful protest. At the same time, the cries for justice, accountability, and humanity in response to Breonna Taylor’s killing must be heard. And they must be understood. The cries to end systemic racism can’t be hand-waved or dismissed in a conversation about how protesters should act.”

Booker is doing this as a statewide candidate, taking stories from the streets of Louisville to the rest of Kentucky as the June 23 Democratic primary approaches.

Wherever he goes, in an energetic campaign that has visited every corner of the state and that has sought to forge an urban-rural coalition, Booker raises the same concerns about economic and social and racial injustice—and about a particular need to “make sure we are accounting for the racial disparities and inequities in our justice system.” He did it Monday night, in a debate with Amy McGrath, the free-spending front-runner in the contest, and Mike Broihier, a former Marine officer who farms in south-central Kentucky.

“Barely made it today because I left the streets where so many Kentuckians are demanding justice and accountability,” Booker said as he opened his remarks in the Kentucky Educational Television debate. 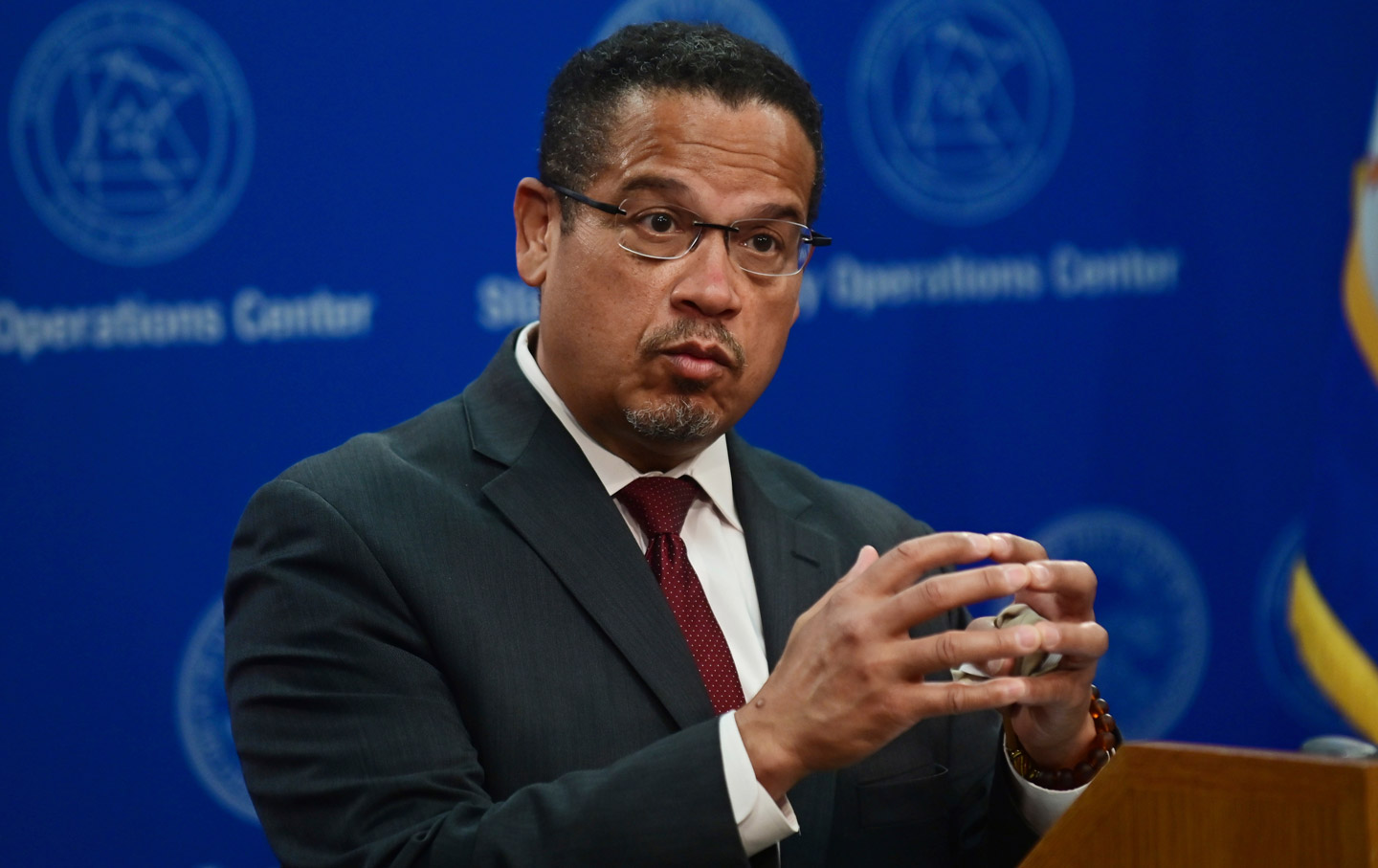 Keith Ellison on Police Brutality: ‘We Need a Vision That Says There’s Going to Be Accountability’

“What we’re seeing now in Louisville [and] all over our country,” he continued, “are people that feel ignored and abandoned. They feel like justice is not accountable to them. They feel like their humanity is ignored and denied. Very specifically, they’re feeling the weight of structural racism and inequity that has permeated [society] for generations. I speak boldly on that; it informs my platform and why I’m running for US Senate to beat Mitch McConnell, because we need real change—not just tweets, not just words. So I’ve stood, not only in the legislature but in every level of government, demanding system-level change and accountability—and even in this moment of tension, racial tension, and angst in our community, standing up to say that we need to get rid of no-knock warrants, the same dynamic that allowed for Breonna Taylor to be killed in her home, in her sanctuary. And, also, understand that we need to reform and reimagine how we engage with policing. Instead of a militaristic operation, how do we bring more partnership and collaboration into the community and create more accountability?”

That’s precisely the way Democrats up and down the 2020 ticket—from Joe Biden to contenders for local law enforcement posts—should be talking about police brutality, and about the mass outpouring of protest against a criminal justice system that fails to guarantee liberty and justice for all. And that’s how Democrats who are in positions of power should be governing—by moving rapidly to enact meaningful changes, such as a House proposal to overturn the “qualified immunity doctrine” that shields police officers from lawsuits, and proposals by progressive Democrats in the US House and Senate to prohibit the transfer of federal military equipment to local police forces.

Getting specific and outlining the argument for fundamental change fills the political void with ideas and a sense of urgency about addressing them. That makes it harder for demagogues like Trump and McConnell to frame the discussion. “I think that’s what people are demanding from the Democratic Party,” Booker told me this week. “If you are saying you are going to stand up for people, then do it.”

The question is whether Democrats will “do it” right now—and in November. Booker is running an uphill June 23 primary race against Amy McGrath, a retired Marine fighter pilot and defeated 2018 congressional candidate who has much more money and a far more traditional approach. While Booker speaks movingly about his own connection to the protests—a cousin of his was close to Breonna Taylor, and he knew a local businessman who was shot and killed by Louisville police Monday—the Lexington Herald-Leader noted after Monday’s debate that “Amy McGrath, the Democratic front-runner, cited the coronavirus pandemic as her reason for staying home.”

McGrath, a centrist who has mounted a predictable bid, was talked into running by Senate minority leader Chuck Schumer and enjoys strong support from DC insiders. But Booker has picked up endorsements from 16 Democratic legislators from across Kentucky in what Kentucky Public Radio referred to as “a reminder that not all Kentucky Democrats are on board with Amy McGrath.” The leader of Democrats in the Kentucky legislature, Joni Jenkins, described Booker as “head and shoulders” above his rival.

Part of what makes people say that about Booker is his determination to challenge an awful status quo—on the grounds of practical necessity and principle. “We can lean into our integrity,” he says, “and we don’t have to back off on issues of racial justice.”