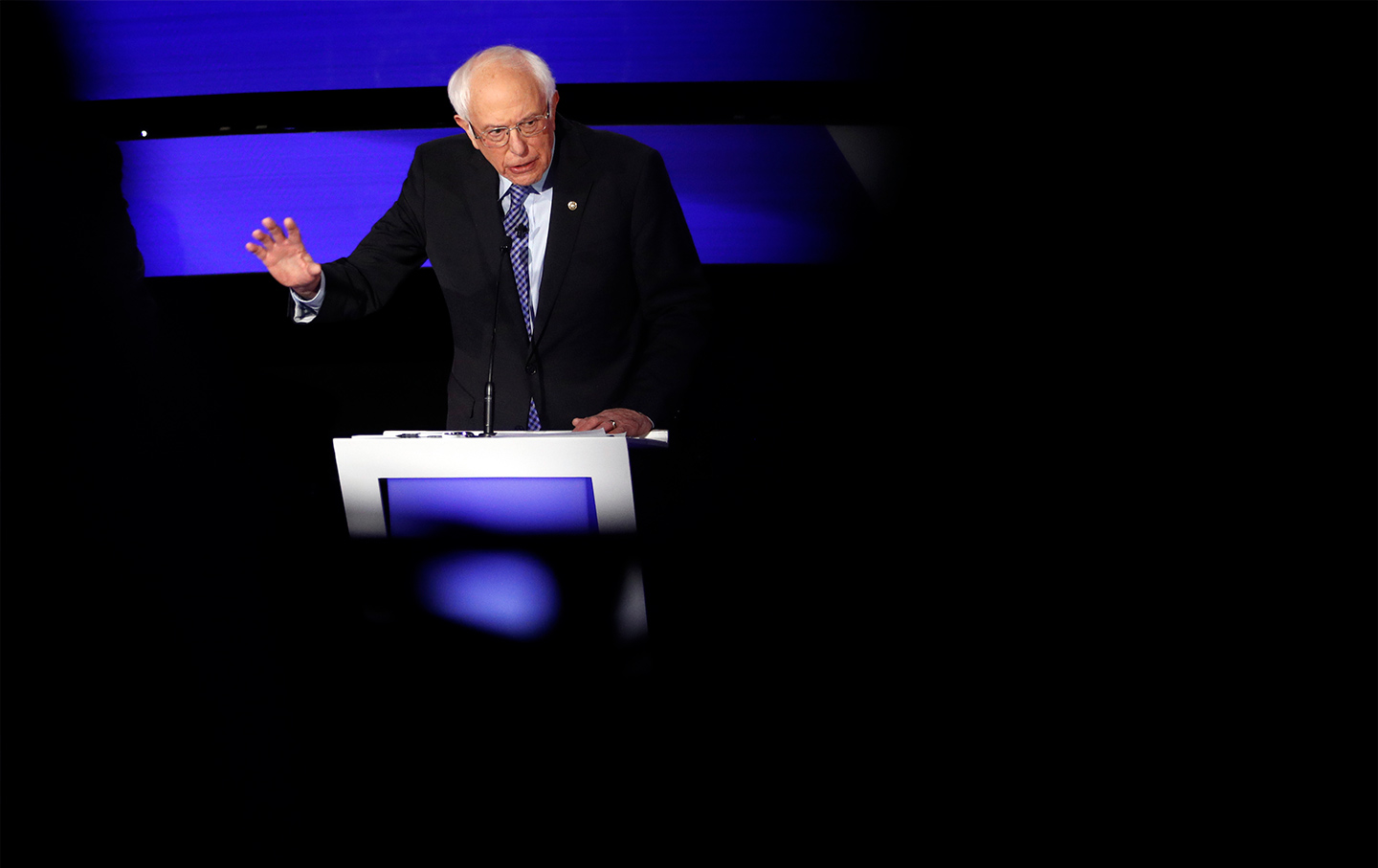 I was in Seattle in 1999 for the protests against the World Trade Organization and the failed trade policies of the 20th century. And for a moment it seemed as if the divisions between activists that had too frequently allowed corporatists to get their way with the economy and the planet were being overcome. Teamsters and turtles—trade unionists fighting for jobs and activists dressed as threatened species to highlight environmental concerns—marched in solidarity.

Maybe the 21st century could be different.

At the Democratic presidential debate on Tuesday in Des Moines, the candidates had a spirited discussion of trade policy in general and the Trump administration’s United States Mexico Canada Agreement (USMCA) in particular. Faced with a line of questioning that encouraged them to compromise away the future in order to achieve some modest gains in the moment, most accepted the latest variation on the old “free trade” calculus.

But Bernie Sanders refused to play the game.

“The Senate will likely soon approve a new trade deal with Mexico and Canada, Iowa’s largest trading partners,” said Brianne Pfannenstiel of The Des Moines Register. “Senator Sanders, you have said that new deal, the USMCA, quote, ‘makes some modest improvements,’ yet you are going to vote against it. Aren’t modest improvements better than no improvements…”

”No,” replied the senator from Vermont, who explained:

The answer is we could do much better than a Trump-led trade deal. This deal—and I think the proponents of it acknowledge—will result in the continuation of the loss of hundreds of thousands of good-paying jobs as a result of outsourcing.

The heart and soul of our disastrous trade agreements—and I’m the guy who voted against NAFTA and against permanent normal trade relations with China—is that we have forced American workers to compete against people in Mexico, in China, elsewhere, who earn starvation wages, $1 or $2 an hour.

Second of all, every major environmental organization has said no to this new trade agreement because it does not even have the phrase “climate change” in it. And given the fact that climate change is right now the greatest threat facing this planet, I will not vote for a trade agreement that does not incorporate very, very strong principles to significantly lower fossil fuel emissions in the world.

“But,” the moderator interjected, “Senator Sanders, to be clear, the AFL-CIO supports this deal. Are you unwilling to compromise?”

Sanders knows these issues. Well. He wasn’t thrown off by the question. “The AFL-CIO does. The Machinists Union does not,” he said. “And every environmental organization in this country, including the Sunrise Organization, who are supporting my candidacy, opposes it. So I happen to believe—and I hope we will talk about climate change in a moment—if we do not get our act together in terms of climate change, the planet that we’re going to be leaving our kids and our children—and our grandchildren will be increasingly unlivable and uninhabitable.”

Tom Steyer, who has spent millions of his own fortune to argue for a more robust response to the climate crisis, echoed that sentiment. Noting that “climate is my number one priority,” he said, “I would not sign this deal, because if climate is your number one priority, you can’t sign a deal, even if it’s marginally better for working people until climate is also taken into consideration.”

He stressed that “we cannot put climate on the backseat all the time and say we’re going to sign this one more deal, we’re going to do one more thing without putting climate first. That’s why it’s my number one priority. We can do it in a way that makes us richer, but we have to do it.”

The other Democratic contenders should have said the same thing. Instead, they preached various gospels of compromise and came down on the side of the USMCA. Massachusetts Senator Elizabeth Warren and Minnesota Senator Amy Klobuchar made their excuses for it, as did former South Bend mayor Pete Buttigieg. Former vice president Joe Biden poked at Sanders, saying, “I don’t know that there’s any trade agreement that the senator would ever think made any sense, but the problem is that 95 percent of the customers are out there. So we better figure out how we begin to write the rules of the road, not China.”

But this isn’t just about Sanders. Earthjustice, Food and Water Action, Friends of the Earth, Greenpeace, the League of Conservation Voters, the Natural Resources Defense Council, Oil Change International, the Sierra Club, and the Sunrise Movement all signed a December letter opposing “the United States-Mexico-Canada Agreement (USMCA), also known as NAFTA 2.0” because it “fails to address the climate crisis and adequately protect our environment.”

But on Tuesday’s debate stage, it was Sanders who explained why. After Biden spoke, the senator said, “Joe and I have a fundamental disagreement here, in case you haven’t noticed. And that is NAFTA, PNTR with China, other trade agreements were written for one reason alone. And that is to increase the profits of large multinational corporations. And the end result of those two, just PNTR with China, Joe, and NAFTA, cost us some 4 million jobs, as part of the race to the bottom.”

Instead of simply accepting another flawed trade deal, and compromising on saving the planet, Sanders said, “We need some corporate responsibility here.”