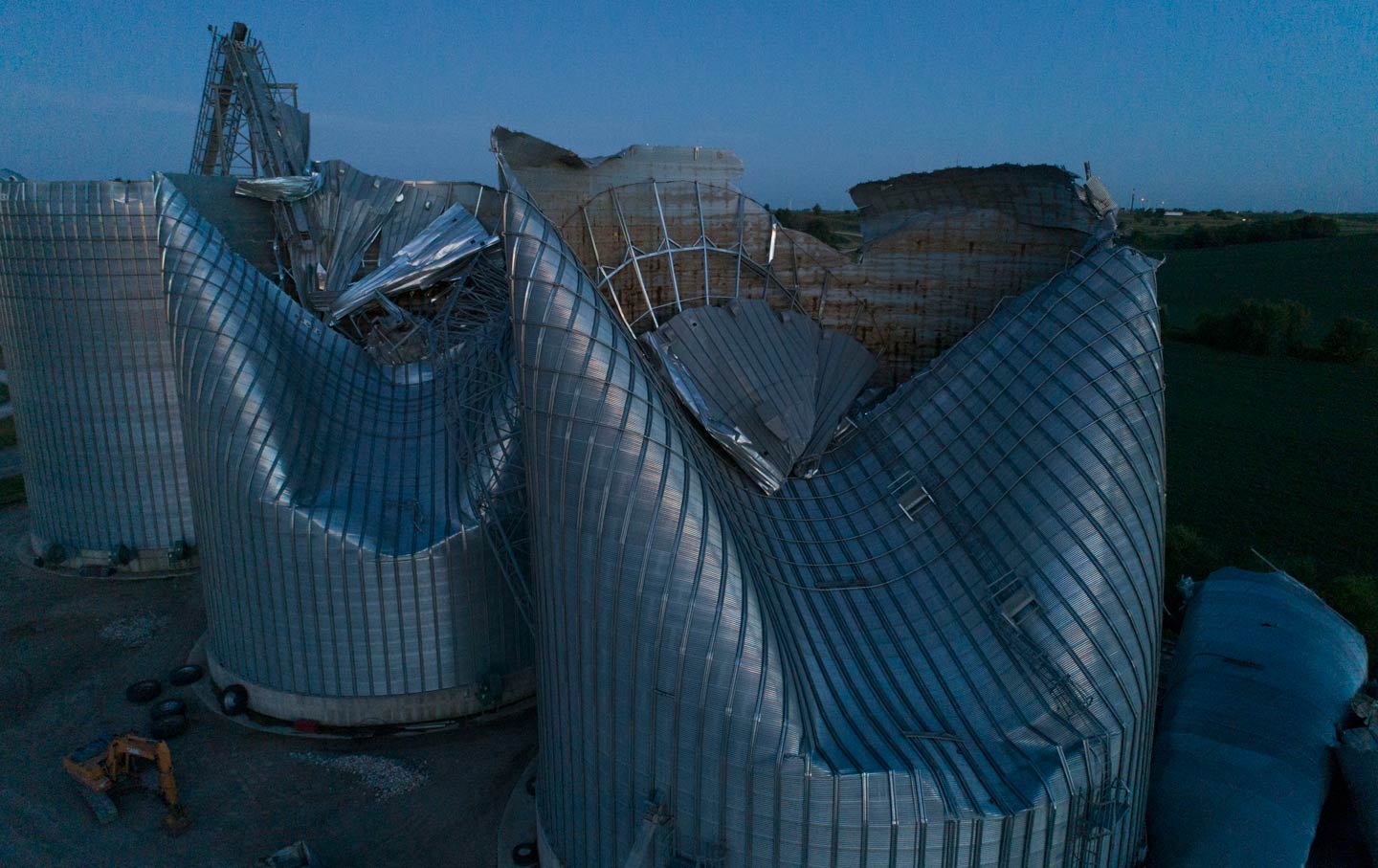 Two weeks after one of the worst storms the Midwest has ever experienced swept across Iowa, the state is still reeling. The storm—known as a derecho, characterized by hurricane-force winds—killed at least three people, flattened millions of acres of farmland, and left about 550,000 households without electricity at its peak. About 100,000 of those households were still without power a week after the storm. Today marks two weeks since the storm, and nearly 1,000 people are still without power.

While derechos are notoriously difficult to predict, extreme weather events are generally becoming more common because of climate change, and the need for an updated, reliable energy grid is becoming increasingly clear. As of 2018, just two energy companies—MidAmerican Energy and Alliant Energy—provide electricity to nearly three-fourths of Iowans, with one or the other being the only option in many towns. These electric monopolies are not uncommon, but they don’t make as much sense today as they may have made in the 20th century when electric infrastructure was being built and electricity-generating technologies were limited. However, as the companies have grown, they have also amassed huge political influence that has allowed them to stop individuals, municipalities, and smaller companies from producing their own power.

Adam Mason, the state policy organizing director for Iowa Citizens for Community Improvement, wrote to Iowa CCI members after the storm, asking them to imagine how much more quickly power could be fully restored if Iowa had distributed energy and if Iowans had access to their own solar power and an updated electrical grid. He remembers Iowa CCI advocates fighting just last year to stop a MidAmerican-backed bill that the Iowa Environmental Council described as an attempt to “monopolize the sun in Iowa” by gutting the state’s net metering program, which allows Iowans who create their own solar or wind energy to put their surplus energy back into Iowa’s power grid.

Environmental advocates were able to negotiate with MidAmerican to eventually find a compromise that kept the net metering program intact, but Iowa’s largest energy companies frequently clash with environmental advocates. Iowa energy companies had been required to reinvest about 7 percent of their revenue back into the state’s energy efficiency programs, but a 2018 bill supported by MidAmerican and Alliant capped their contributions at just 2 percent of their revenue. As this bill moved through the legislature, a group of residents in Decorah began campaigning for a municipal electric utility that would allow their community to continue investing in renewable energy. Alliant, whose franchise agreement with the town of 7,500 people was set to expire that summer, spent over $100,000 campaigning against municipalization and won by just five votes. If the measure had succeeded, it would have been the first municipal electric utility created in Iowa since 1974, though not for lack of effort. MidAmerican funneled about $669,000 into a similar fight in Iowa City in 2005, and several other towns have faced opposition to municipalization efforts. Mason described these efforts as a pattern of MidAmerican and Alliant protecting their profits and denying Iowans access to a more resilient energy grid.

Linn County Supervisor Stacey Walker argues that investing in distributed energy storage, as well as microgrid infrastructure and underground wiring, is essential to protecting Iowa’s power grid against extreme weather events. Linn County has seen some of the storm’s harshest damage and has suffered the longest power outages. At the storm’s peak, 97 percent of Linn County was without power. There have been reports of people sleeping in tents for several days after their homes were destroyed. While Walker is grateful for the linemen who have been restoring power to his community, he believes the derecho has highlighted the danger of utility monopolies: When a disaster happens, residents are at the mercy of a single corporation’s capacity to respond.

Iowans have also noticed discrepancies in which neighborhoods have seen power return more quickly or may not have lost power at all. Mason said Iowa CCI members have been reporting to him that Des Moines’s suburbs—often higher-income and less racially diverse—have felt less of an impact on their power supply following the derecho. Newer neighborhoods typically benefit from newer infrastructure, such as underground wiring that can’t be pulled down in a storm, but they’re also reaping the benefits of decades of suburbanization surrounding the Des Moines metro. As Walker wrote in an e-mail to The Nation: “Taken together, we find that social and political decisions have driven divestment in both older and rural communities, as well as racially diverse communities, which tend to also have higher populations of low-income residents. This continuous neglect gets the most attention after natural disasters hit, but we need to keep these issues at the center of discussions about community development going forward if we hope to ever make things better.”

Iowa isn’t unique. Many states have utility monopolies. But it may serve as a harbinger of a problem that all states with such monopolies must soon face: Outdated energy grids and overly powerful energy companies are leaving their residents vulnerable. Some states have already begun grappling with these issues. During Superstorm Sandy, while millions of people lost power, parts of New York University’s campus kept the lights on thanks to its microgrid system, which operates independently of the larger power grid. After the storm, New York and surrounding states realized the need for more resilient energy infrastructure and began looking at forms of distributed energy. Soon after, Connecticut became the first state to develop a statewide microgrid program. Modernizing America’s power grid is also a key issue of the Green New Deal, which Walker said he would like to see Iowa move toward. He wrote to The Nation, “It’s clear that we must begin to invest more in non-wire, green, renewable energy alternatives in Iowa, but the question we must ask is whether our elected leaders have the political will to get this done.”