This column is part of Covering Climate Now, a global journalism collaboration cofounded by Columbia Journalism Review and The Nation to strengthen coverage of the climate story.

Global emissions from fossil fuels have now rebounded to pre-pandemic levels. So it’s particularly significant that on Wednesday, at the UN climate conference COP26 in Glasgow, at least 25 countries agreed to end public subsidies for overseas oil and gas development and extraction starting at the end of 2022. China, Japan and South Korea, all heavily involved in funding fossil fuels abroad, have all signed on. In addition, more than 23 countries have committed to ending coal altogether.

Kate DeAngelis, international finance program manager for Friends of the Earth US, said: “Last year at this time I would not have thought we would see countries commit to ending billions of dollars in support for international fossil fuel projects. While this is welcome progress, countries, especially the US, must hold firm to these commitments, shutting off the spigot to fossil fuel companies like Pemex and Exxon. Laggards like Japan and Korea must also step up and join this commitment to enhance its efficacy.”

The 23 countries that announced yesterday that they will commit to phasing out coal include five of the 23 top coal-using nations. This follows on the heels of announcements at the G20 earlier this week and at the G7 announcement in May that they will end financing for coal.

“Act or Die”: Earth Day, Still a Question of Survival

In that group of 23, developed nations will phase out coal by the 2030s and developing nations will do so by the 2040s. Although coal use has already been reduced, it still produced about 37 percent of the world’s electricity in 2019 (the most recent year for which figures are available), according to the International Energy Agency. Of course, the science calls for radical reductions this decade, so by 2030.

Ukraine committed to phasing out coal by 2035. And Poland said it would end coal production by 2049—welcome commitments, but falling far short of the goal of winnowing down emissions during this decade. Additionally, Germany will also have to end coal by 2030. On Wednesday, Minister Hendrik Wüst (CDU) of North-Rhine Westphalia, Germany’s largest coal-producing state, said that the state is ready to end coal by 2030. Poland and Germany are among Europe’s top five coal producers and consumers of coal. Poland constitutes 43 percent and Germany 22 percent of consumption in the EU.

Anna Ogniewska, policy officer of Greenpeace Poland, told The Nation: “It is scandalous that the Polish government decided to sign a declaration and at the same time says that coal phaseout for Poland means [the] 2040s. The declaration clearly indicates that the major economies should phase out coal power in the 2030s and the rest of the countries in the 2040s. Taking into account the latest scientific reports, the climate urgency and the fact that Poland is the 23rd economy in the world, the year 2030 should be the ultimate threshold for the coal phaseout in Poland.”

Additionally, much of yesterday’s attention also focused on the Powering Past Coal Alliance, a 190-member coalition, including nations, cities, businesses, and organizations, that aims to phase out coal power and to end support for new coal-fired power plants. Many of its member nations provided brief overviews of their plans to end coal use.

South Africa will phase out coal in an agreement called the Just Transition, which is providing significant funding Part of the UN, it will allocate $18 billion to transition away from coal. The Just Transition will ensure that quality new jobs are created and it will provide support for local social dialogue, which will include local trade unions and businesses.

India, Indonesia and the Philippines have also signed on to receive funding to transition from coal power to renewable energy.

Since 2017, coal use has been cut globally by 76 percent. Nigel Topping, COP26 high-level champion, stated at the COP26 president’s press briefing: “There’s no jobs in coal. The industry has already decided that.”

COP26 President Alok Sharma said, “The end of coal is in sight.”

Mary Anne Hitt, former director of the Beyond Coal campaign at the Sierra Club, tweeted: “After working for much of my adult life to move the world beyond coal, it’s overwhelming to see these words on the biggest stage at COP26: ‘consign coal to history.’ What once seemed impossible is underway.… Now let’s get it done.”

The timing could not be more urgent. A new report released yesterday by the Global Carbon Project found that emissions from coal, gas, and oil are increasing. While emissions from fossil fuels fell 5.4 percent in 2020 because of Covid-19, the report, coauthored by over 100 scientists from around the world, projected that emissions will rise 4.9 percent in 2021. The fall after the pandemic struck was stronger than the 1.2 percent dip after the 2008 financial crisis and the 3.1 percent dip after the 1990 dissolution of the Soviet Union.

While the report found that emissions have increased again by 2 percent for coal and 1 percent for gas in 2021 versus 2019, oil emissions remain 6 percent below 2019 levels, since emissions from transportation remain low. 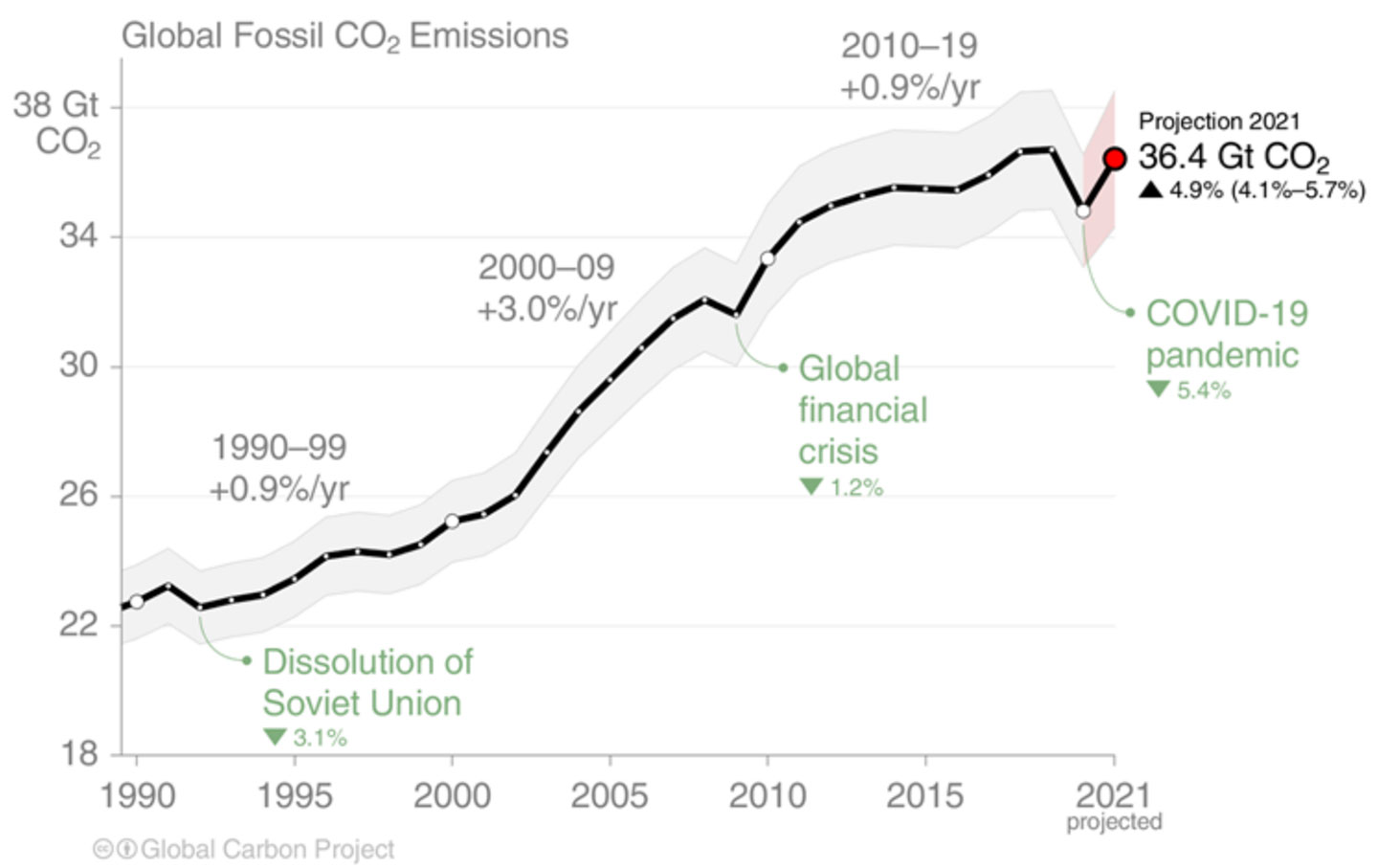 These emissions reductions mean this moment offers a window of opportunity to keep emissions low and to reduce them further. That could only happen with serious action to shift away from fossil fuels.

So the pledges are an important start. But enforcement needs to be hammered out. Many also argued that coal is an industry that has already been in decline, so a focus on ending other fossil fuels, namely oil, is pivotal. Mohamed Adow, from Powershift Africa, a Kenya-based organization focused on shifting to renewable energy, said, “Today is Energy Day. And we hope the leaders will address the elephant in the room, which is fossil fuels. If we’re serious about limiting global warming to 1.5 degrees, we will need to phase out fossil fuels.”

Based on the new commitments this week with regard to coal and methane, Fatih Birol, executive director of the International Energy Agency, announced that “new IEA analysis shows that fully achieving all net zero pledges to date and the Global Methane Pledge would limit global warming to 1.8 C.” The goal is 1.5 C.

At a press briefing, Selwin Hart, UN special adviser and assistant secretary general for climate change, challenged Birol, saying, “Fatih, I heard your numbers, but based on the NDCs [Nationally Determined Contributions] that have been submitted, the world is on a 2.7 degree Celsius pathway, a catastrophic pathway, and therefore we are a long way away from keeping the 1.3 degree goal of the Paris Agreement alive.” His statement received much applause.

Hart’s point is that nations still need to pony up and increase ambitions in their commitments to reduce their greenhouse gas emissions. That work remains over the next week.

Some of the most impacted nations, such Antigua and Barbuda, which chairs the Alliance of Small Island States this year, have upped the ante. At the kick-off of the climate negotiations on Sunday, Lia Nicholson, lead negotiator for Antigua and Barbados called for a phaseout of all fossil fuel subsidies by 2023.

Activists will continue to bring pressure on the negotiators inside the halls of COP26. Today, a youth-led march, organized by Fridays for Future, took place in Glasgow. And tomorrow, A Global Day of Action of Climate Justice will bring an anticipated 50,000 persons to Glasgow with solidarity marches planned around the world.