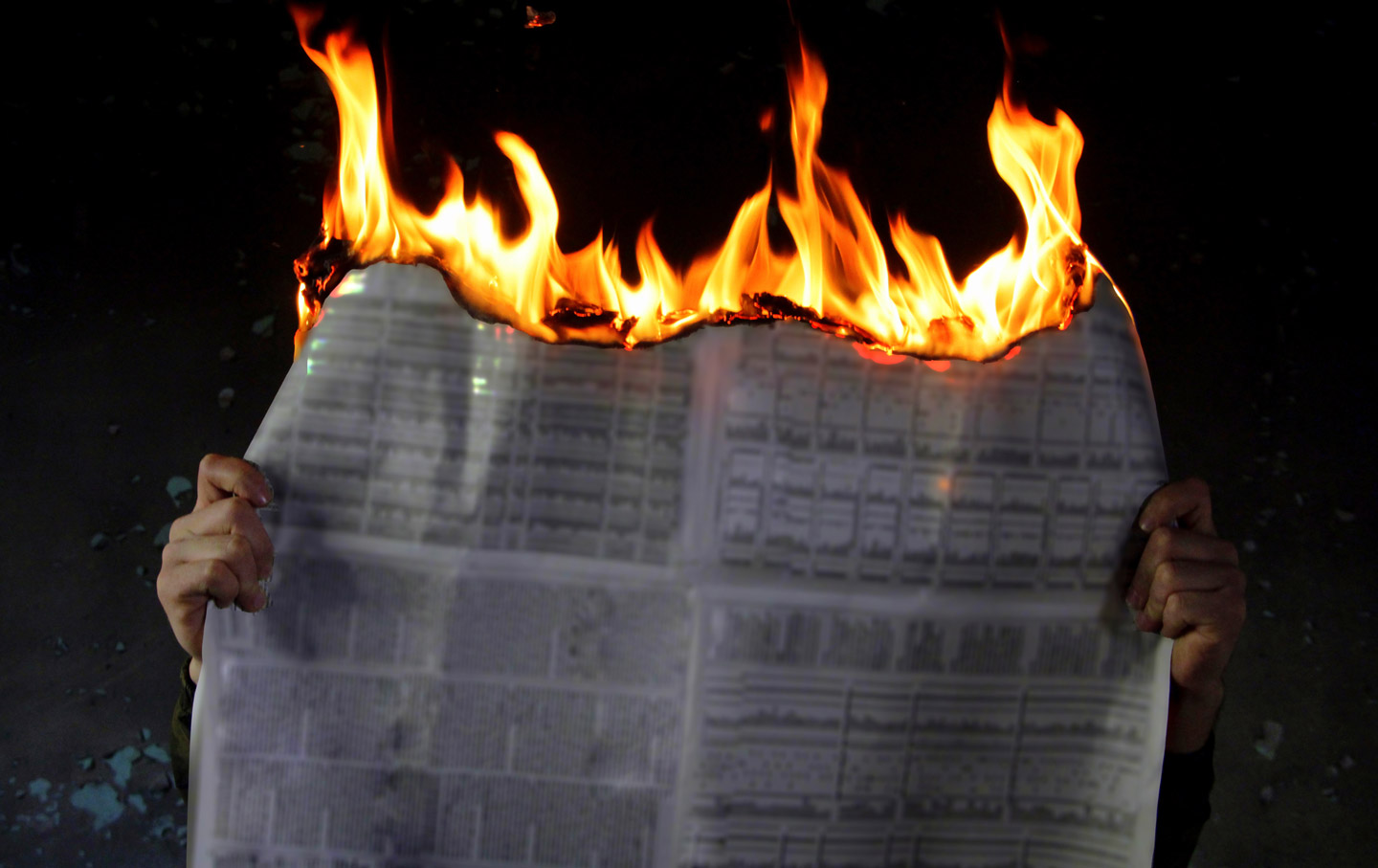 This story is being co-published by The Guardian, The Nation, and Columbia Journalism Review as part of Covering Climate Now, a global collaboration of more than 400 news outlets committed to transforming news coverage of the defining story of our time.

It’s rare to hear the term “climate emergency” in media and political discourse in the United States, even though that is the term thousands of scientists say most accurately describes the situation facing humanity. More than 13,000 scientists have now signed the “World Scientists’ Warning of a Climate Emergency,” which begins by affirming that scientists have “a moral obligation…to ‘tell it like it is,’” before enumerating all the many “alarming trends [that make] it urgently necessary to act.”

With the Democratic and the Republican conventions unfolding this week and next, it’s high time for news coverage to catch up with science and make the “climate emergency” a leading topic in the national political conversation. To be sure, climate change has gotten much more attention in 2020 than in previous campaigns; and the first night of the Democratic convention featured several overtures toward climate action. But by and large, climate is still treated as just another issue. That’s partly because most candidates still don’t say that we face a climate emergency, though Joe Biden comes closer than any major party nominee in history. But it’s also because many news outlets still seem not to recognize climate change as different than the other political subjects they cover. This one has a strict, rapidly closing time limit: Wait too long to take aggressive action, and the climate emergency accelerates beyond salvaging.

That’s why scientists deliberately choose the words “climate emergency.” Like in science, language matters profoundly in politics. It’s one thing for a politician—and for a news story—to say that climate change is an important “issue” or “problem.” “Issues” and “problems,” however worthy, are a dime a dozen on the campaign trail, as is news coverage thereof. It is something else to say that a problem rises to the level of an emergency. An emergency, by definition, demands immediate action. An emergency is not merely one in a long list of worthy concerns; it is a supreme priority that allows no time for delay, half-measures, or distractions by less urgent matters.

A few journalists do use the term “climate emergency.” Al Roker, the weatherman and chief climate correspondent at NBC News, is one. Bill Weir, the climate correspondent at CNN, is another. The Guardian makes a regular practice, after revising its style guide last year, of preferring “climate emergency” or “climate crisis” to the more anodyne terms “climate change” and “global warming.”

Most newsrooms, though, especially in the United States, have avoided the “emergency” framing, regarding it as activist. It’s true that many activists use the term. So, for that matter, have hundreds of national, regional, and local government bodies, including the parliaments of the United Kingdom, France, Portugal, Canada, and Argentina. But the nervousness in newsrooms misses the point: When political actors use this term, they are doing so in accordance with climate science—the same science that should be guiding news judgments.

The political conventions this week and next offer an opportunity for newsrooms to treat the climate emergency with the urgency that science demands. No country is more important to defusing the emergency than the United States. Not only is the US the world’s largest economy and historically its biggest climate polluter, but it has also been the greatest obstacle to climate progress, especially during the Trump administration. Yet Trump has faced relatively little media criticism of his climate record. It seems taken as a given that Trump opposes climate science, which he has dismissed as “a hoax,” so much so that news coverage doesn’t even bother to call him out on it anymore. The result is journalistically indefensible: It gives the president a pass on arguably the most important challenge of our time.

Biden also deserves attention on this front. Without question, Biden’s words and proposed policies are immeasurably better aligned with the science than Trump’s. The former vice president has said that “there is no more urgent crisis facing this nation and the world than the threat posed by climate change.” His climate plan endorses a Green New Deal, in all but name, promising $2 trillion in spending to achieve a zero-carbon electricity sector by 2035, while also earmarking 40 percent of federal climate spending for “communities of color and low income communities [that] have faced disproportionate harm.” And the Biden campaign’s social media posts have occasionally used the term “climate emergency.” The candidate himself, however, seems not to have used those words. Does that reflect caution about not looking more extreme than he deems prudent? Or does it signal that Biden takes climate change seriously but does not regard it as an emergency?

Perhaps Biden will clarify this in his convention speech Thursday night. In any case, between now and Election Day, journalists must make clear to voters what science says: We face a climate emergency, and only immediate, far-reaching action can preserve a livable future. Journalists should ask candidates in both parties and at all levels of government what they plan to do about this emergency. Of course, it is not journalists’ role to tell people how to vote, but it is our responsibility to help them understand what is at stake so they can decide what to do about it in the ballot box.