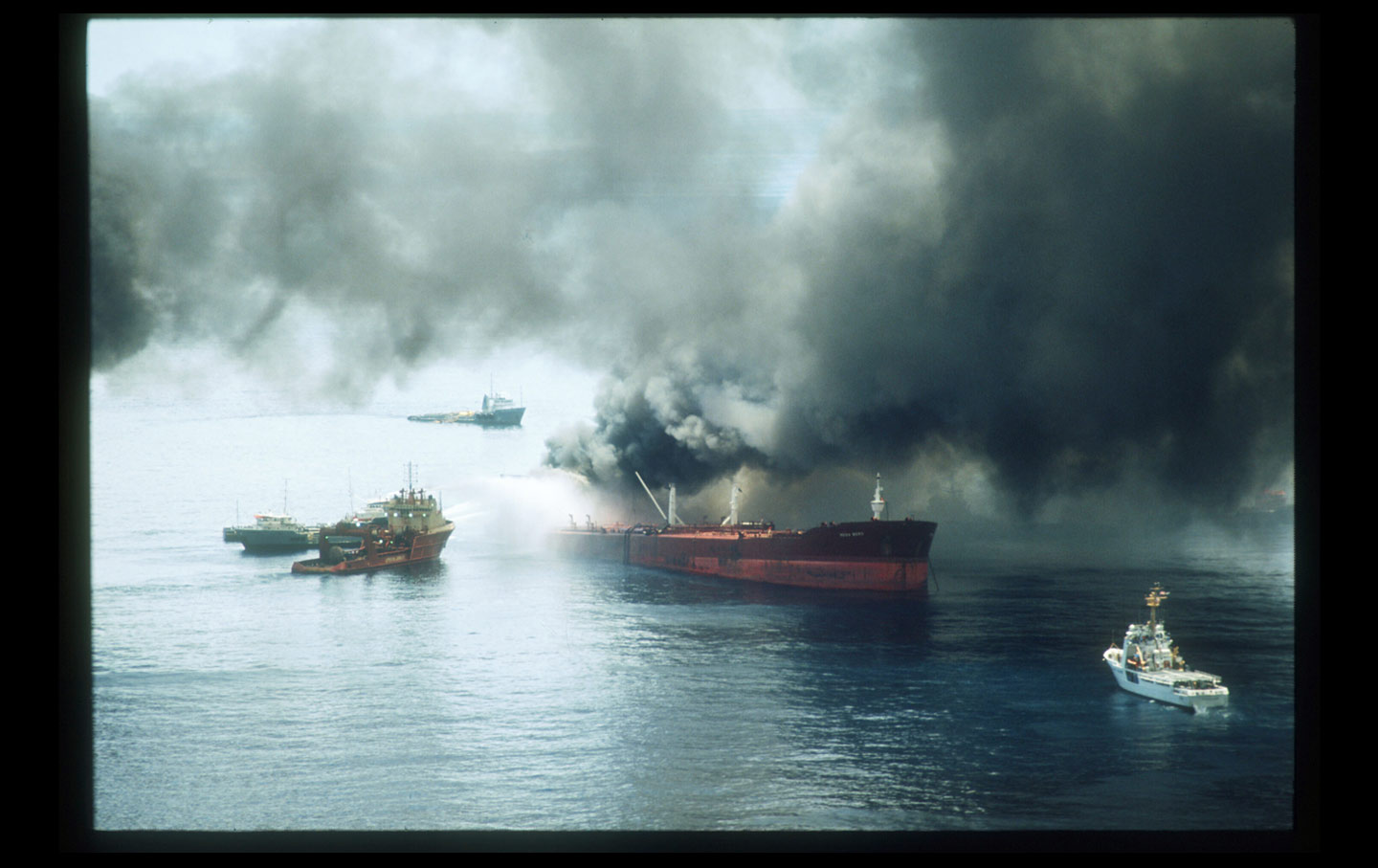 Firefighting vessels attempt to extinguish the blaze aboard the supertanker Mega Borg in the Gulf of Mexico in June 1990, near Galveston, Tex. The vessel, which carried more than three times as much oil as the Exxon Valdez, burned uncontrollably for two days. (Paul S. Howell / Liaison)

This story originally appeared in The Guardian and is republished here as part of Covering Climate Now, a global journalism collaboration co-founded by The Nation and Columbia Journalism Review to strengthen coverage of the climate emergency.

Every person on Earth today is living in a crime scene.

This crime has been going on for decades. We see its effects in the horrific heat and wildfires unfolding this summer in the American West; in the mega-storms that were so numerous in 2020 that scientists ran out of names for them; in the global projections that sea levels are set to rise by at least 20 feet. Our only hope is to slow this inexorable ascent so our children may figure out some way to cope.

This crime has displaced or killed untold numbers of people around the world, caused countless billions of dollars in economic damage, and ravaged vital ecosystems and wildlife. It has disproportionately affected already marginalized communities around the world, from farmers in coastal Bangladesh, where the fast-rising seas are salting the soil and slashing rice yields, to low-income residents of Houston, Chicago, and other cities, whose neighborhoods suffer higher temperatures than prosperous areas across town.

This crime threatens today’s young people most of all and calls into question the very survival of civilization. And yet the criminals responsible for this devastation are still at large. Indeed, they continue to perpetrate their crime, and even make money from it, not least because their crime remains unknown to most of the public.

It’s enough to make your blood boil, especially if you’re a parent. My daughter just turned 16, and I’ve been thinking about the safest place she can spend her adult life since she was a baby and I first started writing about adapting to climate change. The orange skies blanketing her hometown of San Francisco after last summer’s record wildfires were a heartbreaking, infuriating sign that California will not be that safe haven.

The crime in question is the fossil fuel industry’s 40 years of lying about climate change. Arguably the most consequential corporate deception in history, the industry’s lies have had the effect of blunting public awareness and governmental action against what scientists say is now a full-fledged climate emergency. As a candidate in 2020, Joe Biden said he would support efforts to prosecute the oil giants for their lies. It remains to be seen whether he will keep that promise.

Journalists have dedicated years to documenting the crime scene evidence. Then, in 2015, the Los Angeles Times, Inside Climate News, and the Columbia Journalism School blew the case open by tracing the crime link to ExxonMobil, then the world’s largest oil company.

Internal records showed that by the late 1970s, Exxon’s own scientists were briefing its top executives that man-made global warming was real, potentially catastrophic, and caused mainly by burning fossil fuels. Climate activists seized on the revelations, launching the hashtag #ExxonKnew.

Further investigations found that Chevron, Shell, BP, and other oil giants likewise knew that their products threatened to render the earth’s climate uninhabitable. In short, it wasn’t just that Exxon knew. They all knew.

And they all chose to lie about it.

Beginning in the 1990s, oil companies spent millions upon millions of dollars on public relations campaigns to confuse the press, the public, and policy-makers about the dangers posed by burning fossil fuels. Their aim was “to reposition global warming as theory, not fact,” one planning document stated. Front groups and friendly politicians spread the companies’ lies. News outlets, especially in the United States, swallowed and regurgitated those lies to an unsuspecting public.

Humanity ultimately wasted precious decades arguing about whether global warming was real rather than defusing the threat. Instead of launching a transition to renewable energy, the consumption of fossil fuel increased. More than half of the total greenhouse gases now overheating the planet were emitted after 1990—after Exxon and other fossil fuel giants privately knew what havoc they were seeding.

Exxon “could have ended the pretend debate over climate change as early as the 1980s,” the author and activist Bill McKibben later wrote. “When scientists like Nasa’s Jim Hansen first raised public awareness of climate change [in 1988], think of what would have happened if Exxon’s chief executive had gone to Congress, too, and said that their internal scientific efforts show[ed] precisely the same thing.”

While pockets of the American public may already know about Big Oil’s crime, the vast majority of its victims almost certainly do not. How could they? Big Oil’s record of lying never became part of the public narrative about climate change, largely because most news outlets did not incorporate it into their continuing coverage of climate change.

The initial “Exxon knew” revelations in 2015 received relatively little follow-up coverage beyond the outlets that published them. Television, which even in the Internet era remains the primary source of news for most people, ignored the revelations entirely. There were a few stories in the business press and independent media, especially years later when New York state and other local governments began suing oil companies for damages. But the media as a whole seems to have forgotten that Big Oil’s climate lies ever happened.

It’s long past time to right these wrongs. To date, the oil companies, the executives in charge of them, the propagandists they’ve employed, and the politicians they’ve funded have largely escaped blame, much less had to pay—whether through financial penalties or prison time—for the immense damage they have done. News outlets also owe the public an apology for mishandling this story, along with a commitment to doing much sharper coverage in the future.

Humanity cannot get back the 40 years lost to Big Oil’s climate lies. It is now beyond urgent that rich and poor countries alike quit fossil fuels in favor of renewable energy and other climate-smart practices. Equally crucial, we must fortify our communities against the fearsome climate impacts that, because of our decades of delay, can no longer be avoided.

All this will cost money—lots of it. The world’s governments will be arguing from now through the make-or-break UN climate summit in November about who pays how much. Restoring Big Oil’s lies to their rightful place at the heart of the climate story would offer an answer to that riddle, one that Joe Biden should be pressed on: Big Oil knew—shouldn’t Big Oil pay?