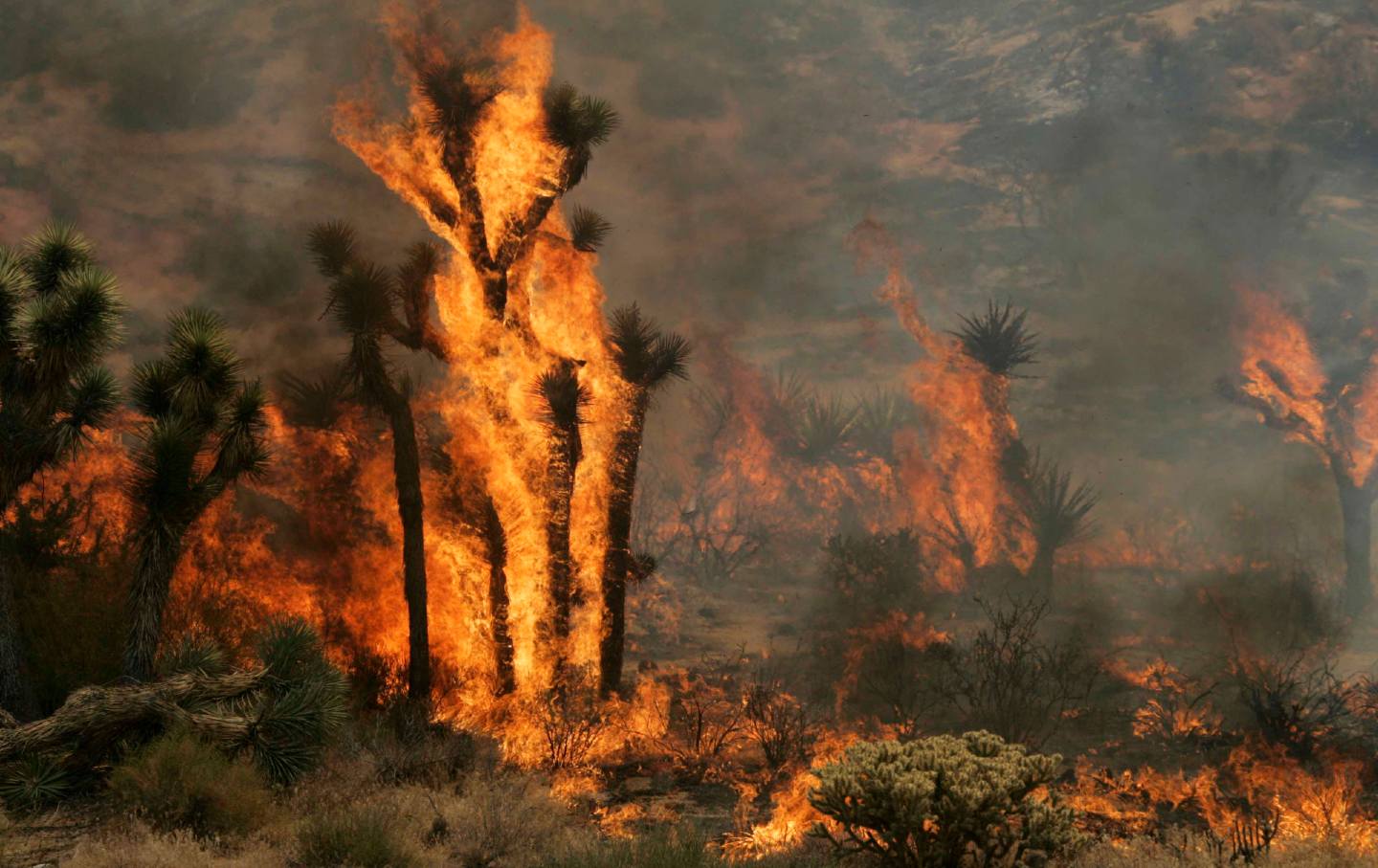 In Greener Than You Think—a 1947 novel by left-wing science fiction writer Ward Moore—a mad woman scientist in Los Angeles, one Josephine Francis, recruits a down-and-out salesman named Albert Weemer, described as having “all the instincts of a roach,” to help promote her discovery: a compound called “Metamorphizer” that enhances the growth of grasses and allows them to thrive on barren and rocky soils. She dreams of permanently ending world hunger through a massive expansion of the range of wheat and other grains. Weemer, a scientific ignoramus, thinks only of making a quick buck peddling the stuff door to door as a lawn treatment. Desperately needing cash to continue her research, Francis reluctantly agrees, and Weemer heads out to the yellowed lawns of tired bungalow neighborhoods.

To his surprise the treatment, which alters grass genes, works—only too well. In the yard of the Dinkman family, crabgrass is converted into a nightmare “Devil Grass,” resistant to mowing and weedkillers, that begins to spread across the city. “It writhed and twisted in nightmarish unease…inexorably enveloping everything in its path. A crack in the roadway disappeared under it, a shrub was swallowed up, a patch of wall vanished.” It continues to eat pavements and houses and finally consumes the city: a monstrous new nature creeping toward Bethlehem.

Greener Than You Think is both hilarious and slightly unnerving. But its absurd premises are being turned into current events by climate change: In reality, Devil Grass is actually Bromus, a tribe of invasive and almost ineradicable grasses bearing appropriately unsavory names such as ripgut brome, cheat grass, and false brome. Originating in the Mediterranean and the Middle East, some species have been around California since the Gold Rush, when overgrazing allowed the bromes and European oat grass to aggressively replace native species. But now fire and exurban sprawl have become their metamorphizers as they colonize and degrade ecosystems throughout the state.

The Eastern Mojave Desert is a grim example. En route from Los Angeles to Las Vegas, 20 minutes away from the state line, there’s an exit from I-15 to a two-lane blacktop called Cima Road. It’s the unassuming portal to one of North America’s most magical forests: countless miles of old-growth Joshua trees mantling a field of small Pleistocene volcanoes known as Cima Dome. The monarchs of this forest are 45 feet high and hundreds of years old. In mid-August an estimated 1.3 million of these astonishing giant yuccas perished in the lightning-ignited Dome Fire.

This is not the first time that the Eastern Mojave has burned. A megafire in 2005 scorched a million acres of desert, but it spared the Dome, the heart of the forest. Over the last generation, an invasion of red brome has created a flammable understory to the Joshuas and transformed the Mojave into a fire ecology. (Invasive cheatgrass has played this role in the Great Basin for decades.)

Desert plants, unlike California oaks and chaparral, are not fire-adapted, so their recovery may be impossible. Debra Hughson, the chief scientist at the Mojave National Preserve, described the fire as an extinction event. “The Joshua trees are very flammable. They’ll die, and they won’t come back.”

Our burning deserts are regional expressions of a global trend. Mediterranean vegetation has coevolved with fire; indeed, oaks and most chaparral plants require episodic fire to reproduce. But routine extreme fire in Greece, Spain, Australia, and California is now overriding Holocene adaptations and producing irreversible changes in the biota.

Although Australia is a close contender, it is California that best illustrates the vicious circle in which extreme heat leads to frequent extreme fires that prevent natural regeneration—and with the help of tree diseases accelerate the conversion of iconic landscapes into sparse grasslands and treeless mountain slopes. And with the native plants, of course, go the native fauna.

At the beginning of this century, water planners and fire authorities here were primarily focused on the threat of multiyear droughts caused by intensified La Niña episodes and stubbornly persistent high-pressure domes—both of which could be attributed to anthropogenic warming. Their worst fears were realized in the great drought of the last decade, perhaps the biggest in 500 years, leading to the death of an estimated 150 million bark-beetle-infested trees—which subsequently provided fuel mass for the firestorms of 2017 and 2018.

The great die-off of pines and conifers has been accompanied by an exponentially expanding fungal pandemic known as “sudden oak death” that has killed millions of live oaks and tanoaks in the California and Oregon Coast Ranges. Since the tanoaks, especially, grow in mixed forests with Douglas firs, redwoods, and ponderosa pines, their dead hulks should probably be accounted as million-barrel fuel-oil equivalents in the current firestorms raging in coastal mountains and Sierra foothills.

In addition to ordinary drought, scientists now talk about a new phenomenon, the “hot drought.” Even in years with average 20th century rainfall, extreme summer heat, our new normal, is producing massive water deficits through evaporation in reservoirs, streams, and rivers. In the case of Southern California’s lifeline, the lower Colorado River, a staggering 20 percent decrease in the current flow has been predicted within a few decades, independent of whether precipitation declines.

But the most devastating impact of Death Valley–like temperatures (it was 121 degrees in the San Fernando Valley a few weeks ago) is the loss of plant and soil moisture. A wet winter and early spring may mesmerize us with extravagant displays of flowering plants—but they also produce bumper crops of grasses and herblike plants (forbs) that are then baked in our furnace summers to become fire starter when the devil winds return.

Bromes and other annual exotic grasses are the chief byproducts and facilitators of this new fire regime. Years of research at experimental plots, where the scientists burn different types of vegetation and study their fire behavior, has confirmed their Darwinian edge. They burn at twice the temperature of herbaceous ground cover, vaporizing soil nutrients and thus inhibiting the return of native species. Bromes also thrive on air pollution and are more efficient than most plants in utilizing higher levels of carbon dioxide—big evolutionary advantages in the current struggle between ecosystems.

How to Save the Postal Service

A research group at Oregon State’s College of Forestry that is studying grass invasions in West Coast forests, a hitherto neglected subject, warned earlier this year that once the feedback loop with fire is firmly established, it becomes a “perfect storm.” Like Weemer’s Devil Grass, the invaders defy human will. “Management actions such as thinning and prescribed fire, often designed to alleviate threats to wildfires, may also exacerbate grass invasion and increase fine fuels, with potential landscape scale consequences that are largely under-recognized.” Only a constant sustained effort to remove grass biomass—something that would require a large army of full-time forest workers and the full cooperation of landowners—could theoretically postpone the weed apocalypse.

It would also require a moratorium on new construction, as well as post-fire rebuilding in endangered woodlands. A majority of new housing in California over the last 20 years has been built, profitably but insanely, in high-fire-risk areas. “Exurbanization,” much of it white flight from California’s human diversity, everywhere promotes the botanical counter-revolution. But residents usually don’t see the grass for the forest.

How should we think about what is happening? In the late 1940s the ruins of Berlin became a laboratory where natural scientists studied plant succession in the wake of three years of firebombing. Their expectation was that the original vegetation of the region—oak woodlands and their shrubs—would soon reestablish itself. To their horror this was not the case. Instead escaped exotics, some of them rare garden plants, established themselves as the new dominants.

The botanists continued their studies until the last bomb sites were cleared in the 1980s. The persistence of this dead-zone vegetation and the failure of the plants of the Pomeranian woodlands to reestablish themselves prompted a debate about ‘Nature II.’ The contention was that the extreme heat of incendiaries and the pulverization of brick structures had created a new soil type that invited colonization by rugged plants such as “tree of heaven” (Ailanthus) that had evolved on the moraines of Pleistocene ice sheets. An all-out nuclear war, they warned, might reproduce these conditions on a vast scale. (For more about this, see my book Dead Cities.)

Fire in the Anthropocene has become the physical equivalent of nuclear war. In the aftermath of Victoria’s Black Saturday fires in early 2009, Australian scientists calculated that their released energy equaled the explosion of 1,500 Hiroshima-sized bombs. Even greater energy has produced the pyrocumulus plumes that for weeks have towered over Northern California. The toxic orange fog that has shrouded the Bay Area for weeks is our regional version of nuclear winter.

A new, profoundly sinister nature is rapidly emerging from our fire rubble at the expense of landscapes we once considered sacred. Our imaginations can barely encompass the speed or scale of the catastrophe.

A previous version of this article stated that the Joshua trees lost in the Dome Fire in California are 1,000 years old. That may be the case, but researchers say that “hundreds of years” would be more accurate.
AlertMe
Keep Reading
Ad Policy