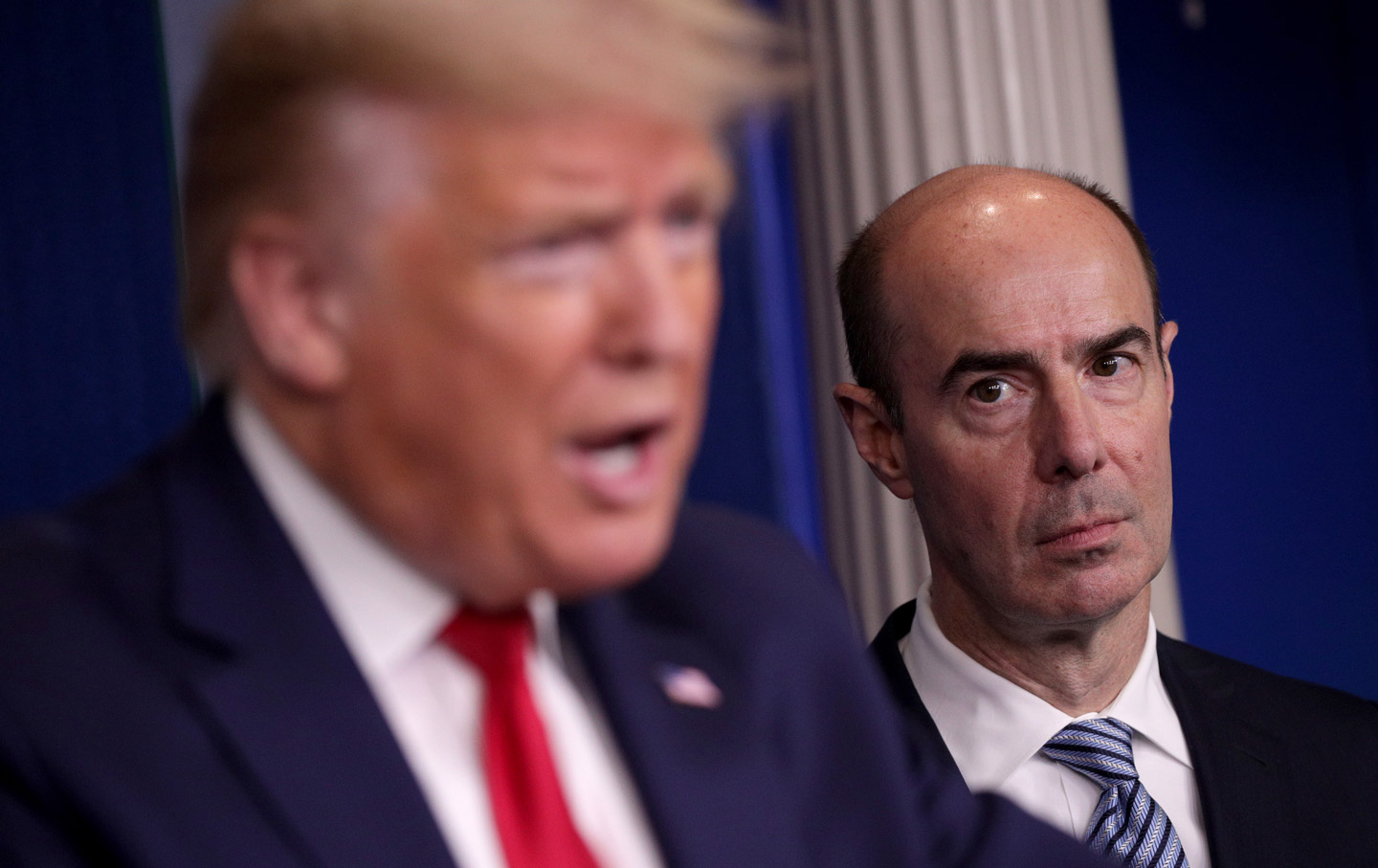 The last time the United States faced an unemployment challenge as daunting as the one that now exists—and that will intensify as the economic crisis that extends from the coronavirus pandemic worsens—President Franklin Roosevelt named sociologist Frances Perkins as the secretary of labor. He could not have chosen better. Perkins understood that “the people are what matter to government, and a government should aim to give all the people under its jurisdiction the best possible life.”

Perkins knew that the starting point for guaranteeing that best possible life was an emphasis on the safety and security of workers.

The same cannot be said of the current secretary of labor, Eugene Scalia, who operates on the principle that nothing matters so much as protecting the bottom lines of the business interests he represented as a corporate lawyer. That’s a serious problem, because, while attention to the federal response to Covid-19 has focused on President Trump’s press briefings and congressional bills, key cabinet agencies will play a huge role in determining whether the “reopening” of the American economy is functional and fair and safe for American workers.

Getting America back to work when the coronavirus pandemic ebbs is going to require visionary leadership, and ideally it would come from the Department of Labor, which, according to its mission statement, is supposed “to foster, promote, and develop the welfare of the wage earners, job seekers, and retirees of the United States; improve working conditions; advance opportunities for profitable employment; and assure work-related benefits and rights.” Unfortunately, Scalia, the son of a notorious former Supreme Court justice who made his own name as a special assistant to Attorney General William P. Barr during the presidency of Bush père and went on to serve under Bush fils as United States solicitor of labor, appears to be the wrong man in the wrong place at the wrong time.

Last year, a New York Times assessment described Scalia as “perhaps best known for his opposition to a regulation that would have mandated greater protections for workers at risk of repetitive stress injuries.” That was actually a generous take.

In the years before President Trump nominated him for the labor post in 2019, Scalia became the lawyer of choice for corporate interests that wanted to curtail the rights of workers and consumers. He fought against efforts to force large corporations to provide health care coverage for employees, sought to limit worker protections under the Americans with Disabilities Act, and literally led the fight to upend requirements that financial advisers give counsel that is in the best interest of their clients. Scalia has represented Walmart, Boeing, and the US Chamber of Commerce, a lot. Workers? Not so much.

Scalia’s biases would warrant concern at any time, but they are doubly troubling at a point when jobless claims have spiked, the unemployment insurance system is overwhelmed, and essential workers have not received adequate protection. As the economy reopens, the great danger is that corners will be cut in order to serve the bottom lines of corporations—and that workers will be further endangered.

The best way to avert that threat is for Congress to give Scalia and the Department of Labor clear, unequivocal directions on how to reopen America. To that end, Senators Tammy Baldwin, the Wisconsin Democrat who is the ranking member of the Senate Subcommittee on Employment and Workforce Safety; Patty Murray, the Washington Democrat who is the ranking member of the Senate Committee on Health, Education, Labor, and Pensions (HELP); and Martin Heinrich, the New Mexico Democrat who is the party’s top Senate representative on the Joint Economic Committee are demanding that Scalia direct the Occupational Safety and Health Administration (OSHA) to outline specific worker health and safety standards, guidance principles, outreach initiatives, and enforcement protocols before the reopening of the economy.

“Protecting our country’s workers is essential to their safety and health, to the lives and well-being of customers and patrons, to our collective public health, and to the health of our economy. Not only do you have an obligation to protect our workers, you have the statutory authority to do it; we respectfully request you do so with urgency,” write the senators in a new letter that is signed by 26 of their colleagues.

Arguing that “employers need clear guidance on what they should do to ensure safe workplaces—and workers across the country have been waiting for your leadership,” the senators are calling on Scalia to:

These demands need to be amplified. Too much focus has been placed on President Trump’s outrageous statements and his refusal to follow the counsel of public health experts who warn against a haphazard reopening of businesses.

Trump is a dangerous player.

But so, too, is a Department of Labor that fails to protect workers in a perilous moment. As Senator Baldwin and her colleagues remind us, “This is not good for workers, and it is not good for public health.”

The Court Has Decided: Someone Will See Trump’s Financial Crimes—Someday