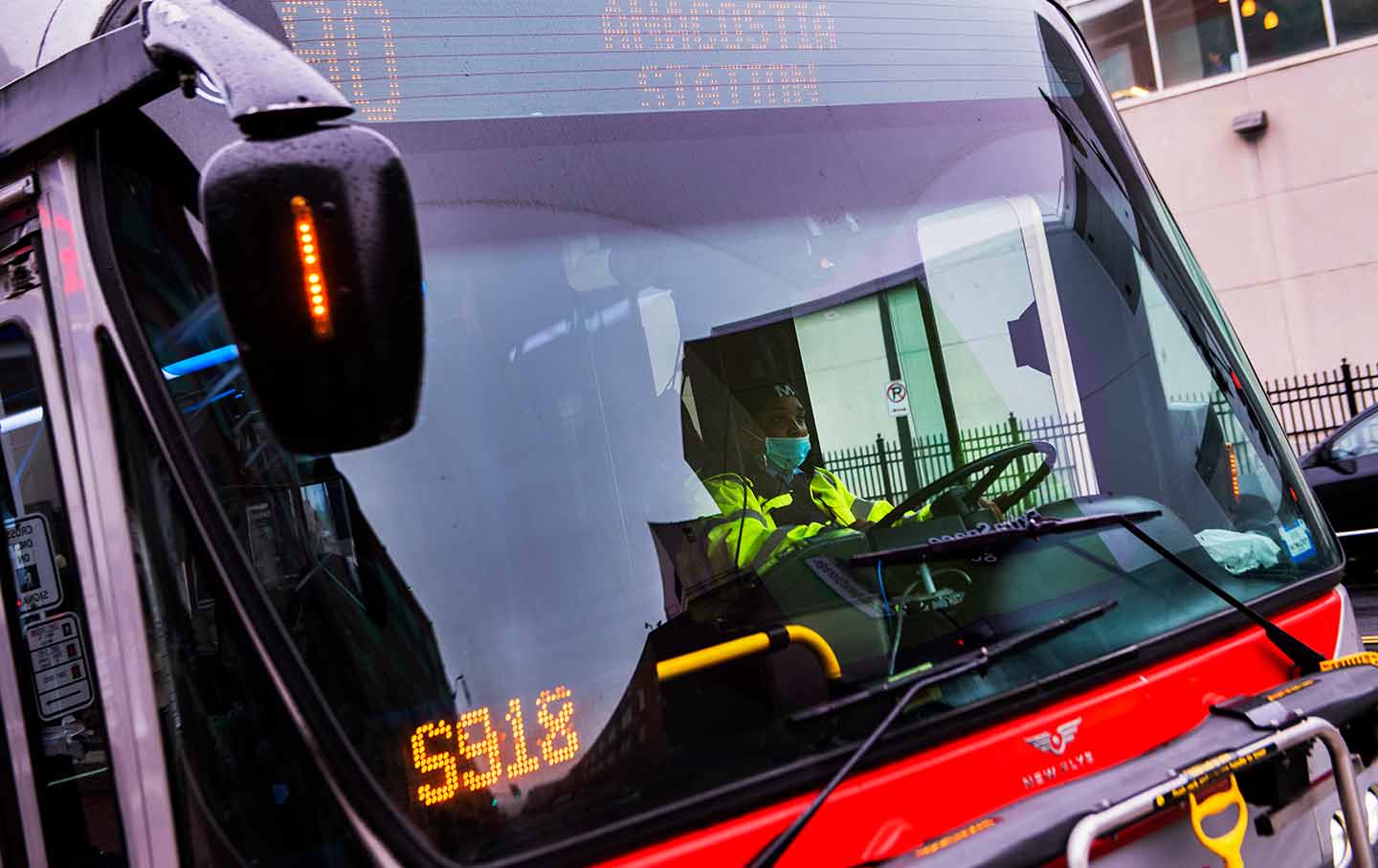 Transit workers across the United States and Canada paused at 7:10 pm ET on Friday, March 27, for a moment of silence to honor the memory of Scott Ryan, a bus driver in Snohomish County, Washington, who was the first member of the Amalgamated Transit Union (ATU) to die of Covid-19.

Ryan, a 41-year-old father of three, was a shop steward with ATU Local 1576 in the Everett, Washington, region—an area north of Seattle that is near one of the initial hot spots for the spread of the coronavirus. Local papers reported that he was one of 10 workers in his Community Transit workplace that had tested positive or presumptive positive for the coronavirus.

Ryan’s death was not the only one last week. Members of Transport Workers Union of America (TWU) Local 100 in New York City mourned the deaths of conductor Peter Patrassi and bus operator Oliver Cyrus, the first of their union brothers and sisters to succumb to Covid-19.

Recounting that “in 24 hours, we lost two TWU brothers in New York City and an ATU brother in Washington State,” ATU President John Costa warned before the March 27 moment of silence: “Transit workers from coast to coast are continuing to get exposed and infected from Covid-19, and agencies and governments need to act now to protect them. You shouldn’t send troops into battle without protective armor, and you shouldn’t send nurses and bus operators to work without proper personal protective equipment.”

Now, frustrated by the failure of too many cities and systems to protect workers, the Transport Workers Union and the Amalgamated Transit Union have entered into a historic agreement to take “whatever aggressive action is necessary” to “put maximum pressure on transit agencies that are failing to take protective measures to safeguard transit workers, including the provision of masks and gloves.” In so doing, they are mounting a defense not just of their own members but also of passengers who have become increasingly reliant on public transportation in a time of crisis.

In a joint statement, the unions noted that “hundreds of transit workers in more than 20 states have tested positive for the virus. New York City, where 10 transit workers have died, is the national epicenter today, but the virus continues to rapidly spread across the country. Line of duty fatalities among transit workers have also been confirmed in Detroit; New Orleans; Philadelphia; Boston, Washington, D.C.; Rocky Hill, Connecticut; and Everett, Washington.”

“It’s just too much,” Costa told me when we spoke late Friday afternoon. He recounted the deaths of at least eight members of his own union in recent days, and he explained that he was furious with the uneven response of transit agencies to the Covid-19 threat. “Some of them are doing the right thing and some are not,” he said. I asked Costa what he meant by “aggressive action.” He paused and said, “We didn’t sign up to die on these jobs. My operators are tired, they are scared, some of them are sleeping in their cars because they don’t want to get their families sick.”

‘Just Keep Up the Faith’: Workers Are Stepping Up to Beat the Coronavirus

“If [transit agencies] don’t protect us, we can’t keep working,” the union leader said, explaining that if conditions do not improve, his members would have to “take a break” from working.

The ATU and the TWU represent more than 330,000 bus operators, train operators, conductors, track workers, car cleaners, mechanics, and other transit workers in Atlanta, Boston, Chicago, Columbus, Dallas, Detroit, Houston, Miami, Philadelphia, San Francisco, the District of Columbia, and dozens of other communities. These frontline workers keep cities moving in times of crisis, getting doctors and nurses to work and patients to clinics and hospitals, and making it possible for delivery drivers, grocery store clerks, and other essential workers to do their jobs.

Expressing concern not just for his own union’s members but also for the people they transport, Costa warned that in many cities, “We are working in, and [passengers are] being brought to work in, 40-foot Petri dishes with absolutely no protective equipment.”

The ATU and the TWU have been monitoring responses in cities across the country and, on Friday, they bluntly declared:

Too many transit agencies are not providing personal protective equipment for their employees, endangering the lives of our members and the families they go home to. It is beyond shameful that those tasked with overseeing these agencies during this crisis have allowed us to arrive at this juncture! We are prepared to take whatever aggressive action is necessary in order to protect our members and their families. Nothing is off the table. Dying is no way to make a living.

On behalf of their members and the passengers who rely on buses, subways, and other means of transportation, the unions are making necessary demands that transit agencies:

Promising that “we can—and will—take aggressive action” if these demands are not addressed with the urgency that the moment requires, TWU President John Samuelsen says, “We will not sit back and let transit workers be treated like cannon fodder in this war against the coronavirus.”