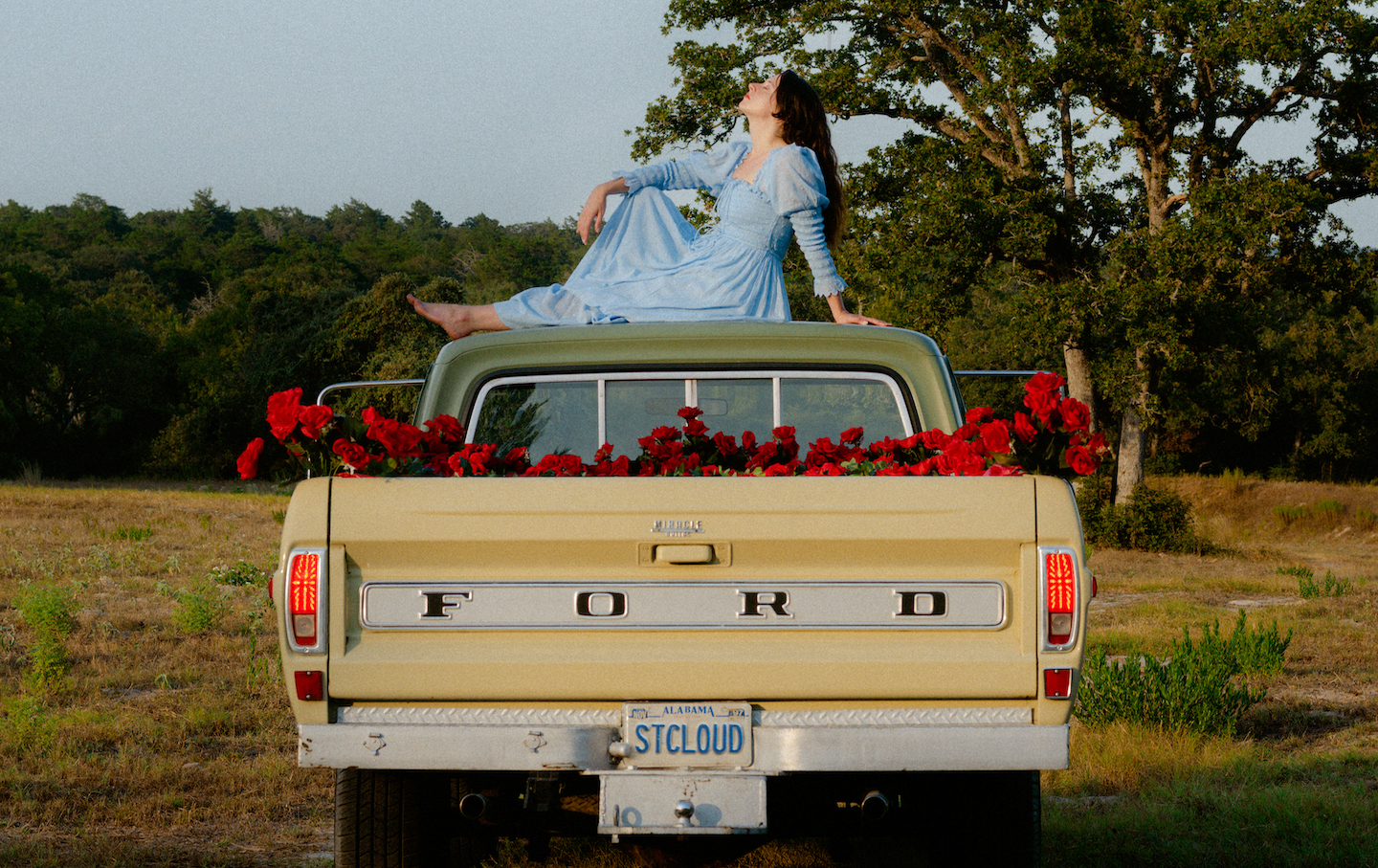 The cover of Waxahatchee’s Saint Cloud.

Katie Crutchfield’s songs are those of a wayfarer, building momentum in transit and feeding off the energy of her destinations. On her last album, 2017’s Out in the Storm, the passage between cities framed personal breakthroughs: She took a train to Berlin for a night of rejuvenation and self-discovery and drove her “own damn car to Brooklyn, New York, USA,” to detach from a fraught relationship. Life as a touring musician has carried Crutchfield all over the world for more than a decade, and Philadelphia in particular holds a special significance for her artistry. Her intermittent home base from 2012 to ’18, the city cradles a DIY scene that nurtured her craggy indie-rock sound and emotionally acute songwriting.

But Crutchfield is a Southerner by birth, her band’s Waxahatchee moniker borrowed from a creek near her parents’ house in Alabama where she recorded her first album under that name. The pull of her roots is felt in the scenery and sounds of her fifth and latest album, Saint Cloud. On “Arkadelphia,” a contemplative tune named for a small city in Arkansas, Crutchfield describes the view from the window of her car: Trailer parks, fireworks, folding chairs, American flags, and roadside produce stands coalesce in a vividly rendered landscape. Arkadelphia is one stop on an extended trip through the American South, and the album’s songs are like postcards scribbled along the way, shot through with the sort of clarity that emerges as the mile markers pass.

The road into West Memphis coaxes an outpouring of self-love and forgiveness; Ruby Falls, in Tennessee, and her father’s hometown of St. Cloud, Florida, host her musings on time and mortality. Such winding pathways—and the lived-in, roots-rock hybrid Crutchfield deploys while tracing them—will feel familiar to fans of Lucinda Williams. Crutchfield is a devout fan herself, who praised the country icon’s authenticity and boldness in a 2018 essay written for the 20th anniversary of Car Wheels on a Gravel Road. Across Saint Cloud, Crutchfield sings in the spirit of Williams’s female characters—sharp, independent, insatiable, ready to pack up the car in pursuit of something better. Each stopover on her journey pulses with the potential for change.

Like Williams, Crutchfield presents herself here as a woman well acquainted with struggle. A passing glance at Saint Cloud’s track list reveals signs of turmoil: “Fire,” “Hell,” “War.” Crutchfield wrote the album shortly after deciding to get sober, and while explicit references to drinking or addiction are absent, its rich imagery often darts between destruction and beauty, weakness and regeneration, covering the distance from recovery’s beginning to end each time it shifts. Cut flowers live, die, and get replaced on “Lilacs,” a full-throated self-affirmation in which Crutchfield slips into jagged, Dylanesque cadences. On “Ruby Falls,” she sings eloquently about the fluctuations of love: “It breaks your neck / It builds you a delicate shrine.”

The album’s backstory also offers context for its dramatic sonic leap away from her previous work. Crutchfield cut her teeth on the punk circuit, and while her Waxahatchee recordings have been rendered in incrementally higher fidelity, their ragged edges remain. But in times of change or distress, we often reach for the comfort of home. In Birmingham, Crutchfield grew up on country music—“classic stuff like Tammy Wynette and Loretta Lynn”—and she’s called it her first musical love. Saint Cloud moderates her pace and cleans up her fuzzy-rock-guitar tone, turning instead to those familiar sounds. Earthy and leisurely, this is as close to a country record as any she has made.

Crutchfield has previously expressed reluctance to aestheticize her roots, telling Glamour in 2013 that “I feel like people romanticize the South a little for art.” She added a qualification: “But that’s just my story.” On Saint Cloud, Crutchfield is readily surfacing less-explored facets of her story. Another of these is the very condition of being an artist, which “The Eye” takes as its subject: “I will chase all the rain, put it down / Call it paint / …It’s a heavy weight,” she sings. In her telling, possession of the artist’s eye—or ear, really—is a burden but also a badge of honor. She’s considered this duality before, in her essay on Car Wheels. “Making something out of thin air that others will take in and connect with is like having a magical power,” she wrote. “Being consumed by the vision, the calling of the eye, is sometimes the flip-side.”

The urge to make art may be an all-consuming blaze, but what a thrill to spot a twin flame in someone else. On “Witches,” Crutchfield calls out a few of her creative kin by name: Allison, her sister and longtime collaborator, is one. “Marlee” refers to Marlee Grace, the dancer and writer who appears in the jubilant video for “Lilacs.” And there’s one last name on the list—Lindsey. Contextual clues suggest that this is Lindsey Jordan, the 20-year-old singer, songwriter, and guitarist who performs as Snail Mail. She and Crutchfield have toured together and share a knack for lyrical self-excavation. “Lindsey’s giving me a little faith about what tomorrow might bring,” Crutchfield sings here.

As much as Saint Cloud, a musical homecoming of sorts, is anchored by Crutchfield’s past, it’s also buoyed by the future—the promise of sobriety, self-acceptance, and songs yet to be written. Jordan appears, ever so briefly, as a beacon of creative potential, a reminder that there is comfort to be found in where we’re going as well as where we’ve come from. And for the present, Crutchfield is her own capable navigator.