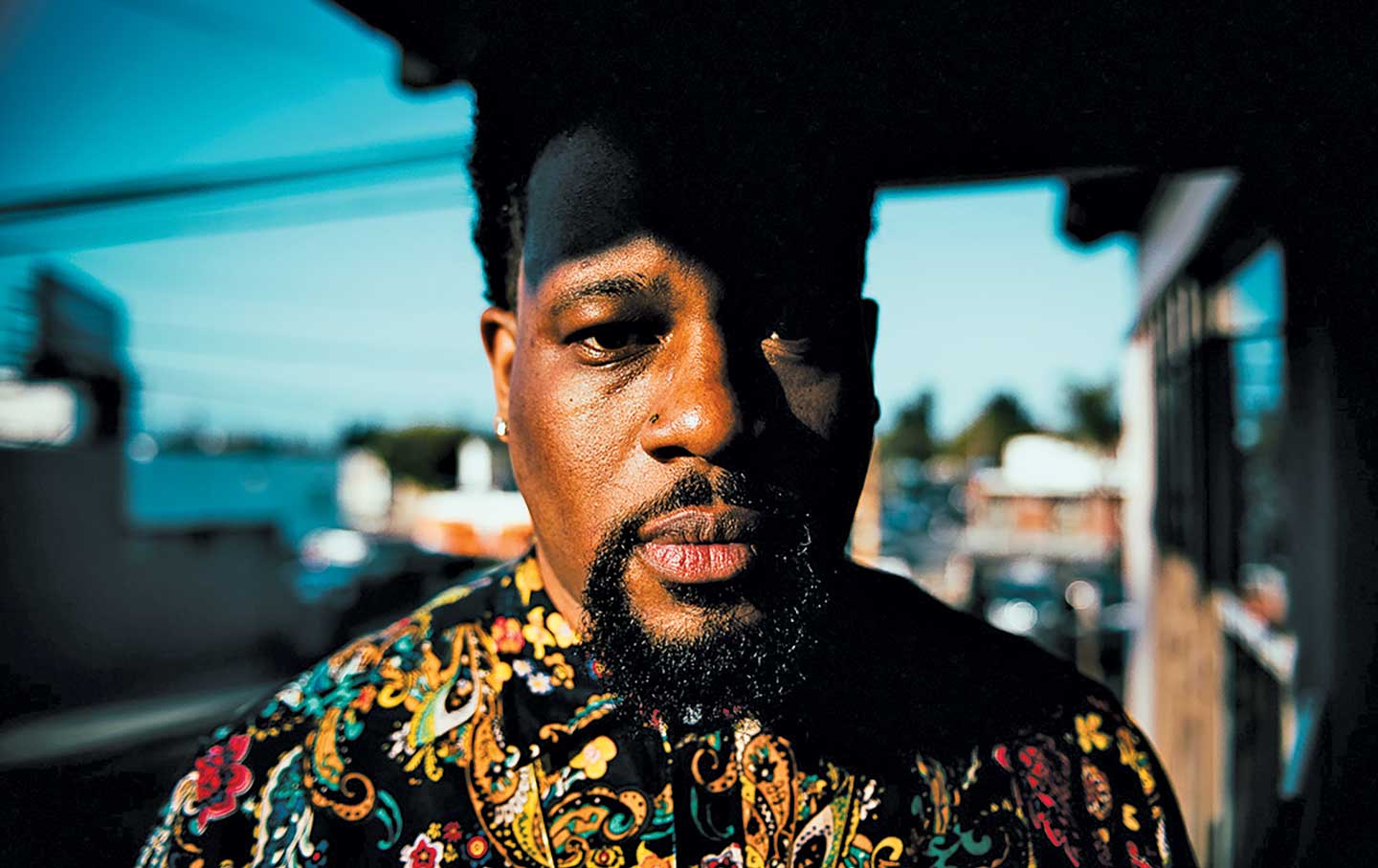 After his slow, decade-long ascent from laid-off schoolteacher to buzzing indie star, Los Angeles rapper Open Mike Eagle suffered a series of setbacks. In 2019 he and his wife divorced, a reunion with his old rap crew Hellfyre Club fell apart, and his Comedy Central variety show, The New Negroes, was canceled after one season. Those upsets form the backdrop to Anime, Trauma and Divorce, the rapper’s whimsical and introspective take on an old trope: the breakup album. By turns goofy and pensive, the record uses pop culture as a vehicle for self-examination and restoration.

The album’s titular subjects are linked by Open Mike Eagle’s relentless hunt for relief—from anxiety, from awkward situations, from the financial strain of making music independently (a long-running theme in his work). His signature mode is a kind of sharp-eyed repose, an outlook bolstered by his easygoing delivery. No matter the topic he’s addressing, be it police violence or living paycheck to paycheck, he speaks leisurely, as if overcoming difficult situations always begins with reframing them, taking them at your own pace.

Anime, in this sense, is Eagle’s ideal speed. Beloved for its expansive tonal range, which can accommodate scenarios as surreal as robot warfare or monster invasions and as mundane as high school romance—and sometimes all of these things at once—anime normalizes whiplash. Eagle taps into this quality throughout the record, indulging his fantasies and admitting his powerlessness outside of them. As he bounces nimbly between confessing his burdens and wishing them away, he binds the two modes together.

The singsongy “Headass (Idiot Shinji)” nods to the protagonist of Neon Genesis Evangelion, a depressed boy who grudgingly finds himself at the center of a war between robots and monsters in postapocalyptic Tokyo. “Ass, on my head / Headass, I’m a head,” Eagle chants in self-mockery. The track is less about identifying as Shinji, whose fear and loneliness distance him from the other characters, and more about giving those insecurities shape. Through Shinji’s struggles Eagle understands himself, a recognition that also characterizes “I’m a Joestar (Black Power Fantasy),” his enthusiastic ode to the anthology series JoJo’s Bizarre Adventure. “It’s my turn, it’s my season!” he declares over springy percussion and bright synths. His excitement is absolutely sincere. He needs a win.

Sometimes Eagle’s pop culture totems speak back to him. On “The Black Mirror Episode,” he half-jokingly credits the dystopian show with ruining his marriage. “Saw a black mirror and it looked like us,” he shouts over a menacing bass line and metallic drone. On “Sweatpants Spiderman,” a nod to a version of the superhero who’s single and deflated, he sighs at the emptiness of retail therapy. “Tattoos, haircuts, gold chains, anime / Tattoos, tattoos, tattoos, tattoos,” he laments, knowing he can’t simply buy a fresh start.

Pop culture has been a refuge and a muse for every generation of rappers, from Run DMC’s anointing of Adidas to the Wu-Tang Clan’s passion for martial arts flicks and Kendrick Lamar’s love of the 1990s sitcom Martin. Anime in particular is adored across eras, with rappers of all stripes smitten by the genre’s colorful action and high-stakes drama. There’s an element of exoticization to this fascination: Anime’s coolness, as critic Sheldon Pearce notes in a survey of hip-hop’s love of Naruto, is tied to its otherness. But the Japanese art form is also a pillar of storytelling, as is rap. Eagle continues this tradition and makes it his own; the daydreams and fantasies that litter his verses bring the darker dimensions of normal life into sharper focus.

What’s truly fantastical, he implies throughout the album, is his rap career. “Asa’s Bop,” a breezy track anchored by a lovely, gibberish chorus performed by Eagle’s adolescent son, pokes fun at the precarity of his chosen profession. “We belong / We pretend we legitimate / Half Joestar / Half Shinji the idiot,” he jokes. His assessment, particularly of his fellow wayward rappers, stings because there’s no bitterness to it. He and his peers, especially those who choose to be independent from the major labels, are living their dream; it just happens to be unglamorous and Pyrrhic. “Everything Ends Last Year,” the album’s fulcrum, addresses Eagle’s failures head-on. Rapping in a weary sigh, he describes his marriage, his canceled show, and his defunct rap crew with a single, defeated descriptor: “ended.”

The album’s lithe, spectral production is as varied as Eagle’s writing. Produced by a corps of rap and electronic producers and mixed by Jacknife Lee, a veteran rock engineer and producer, the beats alternately smolder, coating Eagle’s verses in darkness and shadow, or shimmer, imbuing his rhymes with warmth and light. These colorful yet weightless arrangements never overshadow Eagle’s racing thoughts, fitting the album’s theme of presence and candor. “Death Parade” and “WTF Is Self Care” sound like they were recorded live from his brain.

Eagle has described this record as a meaningful departure from his past work, which tended to center his observations rather than his feelings. Emotions are certainly more pronounced here than in his previous music, but he remains guarded, as on “Bucciarati,” another nod to JoJo’s Bizarre Adventure. “Part of me struck an original trauma / Part of me wears an invisible armor,” he raps, his words coded yet weighted. The song as a whole is a kind of mood board of dread, with Eagle mapping out his distress rather than confessing it outright. What prevents the song from feeling withdrawn is his audible discomfort, manifest in both his frantic delivery and a vocal filter that lowers his voice to a despondent garble. Though he’s not inclined to name his woes, they shape his performances.

The album’s emotional journey ends with Eagle asserting his vulnerability in a similar fashion. “I was okay wherever we went, now I ain’t got no more armor,” he sings on the outro of “Airplane Boneyard,” the space between “I” and “we” vast and final. Anime, Trauma and Divorce doesn’t offer a neat kiss-off or heroic rebound. Eagle’s flights of fancy lead him back to his starting point as a divorced dad and indie rapper recovering from a rough year. He can’t change the past, but he can take solace in the tiny delights that help him push forward. He sounds relieved.